This is the fourth in a series of episode-by-episode reflections on Orphan Black season five (preview article; episode 1 ; episode 2; episode 3). These pieces do not provide thorough plot summaries but do include spoilers; they assume readers have already been viewers. Responses via Twitter continue to be very welcome!

I want to say something about religion, transcendence, and Orphan Black.

Oh, poop on a stoop, you might be thinking, I was starting to enjoy these little essays. Then again, maybe you too are God-haunted, or just curious about those who are. Perhaps you share my appreciation of how Orphan Black pokes fun at conformist, consumerist varieties of religion, warns about more authoritarian, absolutist forms, and sometimes even dares to imagine new, unexpected fusions of the spiritual and the physical.

It really does all three. And whether one identifies most easily with the so-called believers or nonbelievers, I’m going to suggest now that the full significance of Clone Club (both its onscreen members and the show’s dedicated audience) lies in Orphan Black’s ideas about not only gender and genetics, but also genesis. About the ethical foundations to which we postmoderns keep returning.

Put another way: I have an idea about why, when Helena needs to hide from Neolution in season five, she heads to a convent. Not because the show wants to make us all into Catholics. Hardly. Rather, because it invites us to reconsider the preciousness of every life, whether classified as human, animal, or otherwise, and at least one old nun in that convent epitomizes that priority.

When we first met the show’s avenging angel, Helena was deeply deluded by her Prolethean handlers. They told her that she was the original from which the other clones—abominations—had been copied, so in hunting them, her job was to purify the world of blasphemy. Thus Helena became a fearsome beast: in season one, we watched her kill, eat, and grunt her satisfaction with an utter lack of shame or self-consciousness.

Yet even then, savagery was only part of her character. From the start, Helena also displayed a powerful connection to children. Remember the one who awoke to discover a most unusual burglar, a woman clad in a blood-saturated slip performing self-surgery in the guest bathroom? Or Kira’s strange willingness to open the front door to a stranger? How do we explain Helena’s passion for children, her complete lack of hesitation to risk herself in order to protect them?

We could answer entirely in terms of animal instinct, noting how mothers of many species throw themselves into danger to shield their offspring. No doubt some of Helena’s physical aggression is biologically inherited. But take a look at Alison’s pepper-spray and glue-gun tactics, or Krystal’s uncanny ability to be at the wrong place at the right time, and one must acknowledge that environment creates very different forms of ferocity. Prolethean “nurture” was obviously horrific, but what this episode quietly suggests is that Helena also heard other voices. For all the brainwashing of her upbringing, there was a drop or two of the patient, resilient love that she eventually recognizes between the sestras.

Consider the passage from the Hebrew Bible that Helena transcribes onto the walls of her apartment in season one. Orphan Black’s set designers might have easily selected references to the verses in Leviticus that include the term “abomination,” words routinely decontextualized to justify homophobia (but where is the rage against shrimp eaters or wearers of cotton-polyester socks?). Instead, Helena’s graffiti quotes Psalm 139, which is also circled in the heavily annotated Bible she leaves behind: “For you formed my inward parts. You knitted me together in my mother’s womb. I praise you, for I am fearfully and wonderfully made.” The evidence, in other words, is that Helena ultimately rejects the heinous cult that raised her not because it is too religious, but because it is only superficially religious. She and her “miracle babies” embody the kind of violent grace once envisioned by Flannery O’Connor, the prophetic sort that confronts fake religion and probes all the more intently its source material, the core convictions about overcoming vanity and prioritizing social justice that later interpreters too often betray. She holds onto the idea of being a soul.

This is why we find Helena in a convent in season five: not because she or the show condones religious abuse, but because Orphan Black recognizes that the same holy books can be used to inspire either horror or compassion. In this sense, the show leans “postsecular”: it refuses to portray the Enlightenment or modernity as either all good or all bad. It recognizes that just as Charles Darwin and Sir Francis Bacon get misrepresented, so do Jesus and Muhammed. And this awareness seeps through to its deepest questions about the clones’ identities. Are they genuinely special or are they merely flesh for others’ manipulation, as Alison began to fear in episode four? If their genomes match, whether exactly or nearly exactly, on what basis does the show insist that lab rats like Sarah, Alison, Cosima, Helena, and their sestras must be treated as more than corporate property?

You might remember that Cosima asks a variant of this question in the third episode of season three. Holding the recently removed brain of one of her Castor brothers, she ponders, “God, is this what we are? I mean, some neurons and axons and a few pounds of gray matter?” What is the relationship, in other words, between the materially tangible, the measurable, and the spiritually intangible, the incalculable? Cosima continues, “When he died, do you think what he saw was just a temporal lobe trip, or did his soul actually say, ‘I’m out of here, I’m out of this dimension’?” There’s no way to know, of course, and this is part of Orphan Black’s persistent honesty: it doesn’t attempt any sort of complete answer, but only insists on continuing to look for one.

The show does, however, repeatedly expose the fallacy of treating the relationship between science and religion as a zero-sum game. Without question, we must condemn the many ways religions have been used to rationalize terror. At the same time, we should hold onto the places where religions have inspired human beings to insist on the sacredness of self and other, especially in the face of racial, sexual, national, religious, and other forms of difference. When Cosima channels Donna Haraway and rejects Susan Duncan’s logic in season four—“we’re your oncomice”— she is appealing to the same logic that lets her resist P.T. Westmoreland’s entreaties in season five. The core idea is so simple that we take it for granted: the person is sacred. Or as I said in an earlier post, love is antithetical to use.

Does one need to be “religious” in order to live out that idea? No. Ethics is far more a matter of action than dogma, and as Jesus famously warned in Matthew 25, there are many who perform religious certainty yet whose lives are narcissistic and despicable, just as there are many who lack a religious bone in their bodies but whose lives are honorable and generous. This is the postsecular notion that I find within the fabric of Orphan Black: if its clones are effectively one hundred percent genetic identicals, how different should things be, really, for those of us who are 99.9% genetically alike? The thriller’s rapid-fire tragicomedy avoids sentimentality, but one of its central aims is to expose the illusory nature of any claim to superiority. Rather than attacking eugenics on the grounds of any single historical atrocity, is it not pushing even deeper, undercutting even the most basic forms of self-righteousness, of self-satisfied judgmentalism?

If I’m right about this, and if the show follows this claim all the way through, two future developments seem possible. First, I think it is becoming clear that the show is inviting our empathy for the hunted creature on its Island of Dr. Moreau. Revival’s security forces try to force Mud to help them locate this Frankensteinian experiment, and it is likely the creature of whom Mud tells Cosima, haltingly, “It’s not his fault.” A consequence of transgenic experiments by Neolution at some point before Leda and Castor, he is essentially a pre-clone, a test run. When we see the dried blood and manacles on the walls of his former jail cell in P.T. Westmoreland’s home, and as we listen to Virginia Coady’s voiceover about her superiority to Susan Duncan, who “wanted to stop, but I’ve never been squeamish,” it could not be much clearer that he is no less a victim of limitless corporate ownership than the sestras.

Second, if this creature follows in Helena’s footsteps, I will venture an even more uncertain guess. I wonder if the show’s most vicious monster of all may also have one last plot twist in her. Rachel is the clone that fans love to hate; her cold betrayals have made her the ultimate corporate tool, and now she seems to have drunk more deeply than anyone of the Neolution kool-aid. But in the show’s history, being identified as savage or bestial is one of the surest signs that a character will end up deserving some measure of empathy. For Rachel, such a moment came in season two, episode six, when Ethan asks Sarah if he had met Rachel, and she responds, “Yes, I have. What a treat. You’ve really created a monster there.” Ethan immediately objects, “We didn’t. We loved her,” but even he soon decides that Rachel no longer deserves him. Will the show as a whole ultimately abandon Rachel to her endless quest for power? Or might she somehow find the courage to face the costs for her sestras? It’s hard to see any clone dances or dinner parties in Rachel’s future, but maybe, just maybe she will start to recognize the tool she has become. 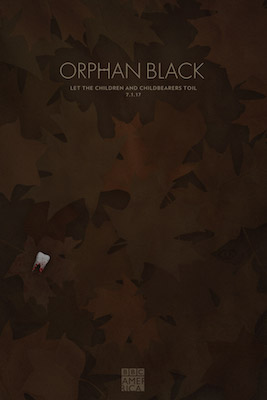