This is the seventh in a series of episode-by-episode reflections on Orphan Black season 5 (preview; episode 1 ; episode 2; episode 3; episode 4; episode 5; episode 6). These pieces do not provide thorough plot summaries but do include spoilers; they assume readers have already been viewers. Responses via Twitter continue to be very welcome!

I suppose you couldn’t have created a reproducing prototype, could you? That would be irresponsible … which is unforgiveable.

Rachel was seething. Her true father — not a biological father, but the man who read to her, played with her, and genuinely loved her — had just quoted The Island of Doctor Moreau, then explained she was barren by design. Supposedly killed years earlier in a lab fire, Ethan Duncan has reappeared only to claim that children of clones were supposed to be impossible.

Paper and desk supplies go flying, glass shatters. Experiments left behind by the office’s former inhabitant are destroyed. It is an epic tantrum — but it is all in Rachel’s head. Outwardly calm, she says only, “It’s time we begin fixing your mistakes.”

That was near the end of season two. Now the gloves are off, and this time the glass actually shatters in Dyad’s executive suite. Shattering a martini glass, “bloody Rachel” plunges its sharpened base into what she now sees as a key component of her betrayal.

How did we get here? Why does one of the most hated characters in the history of Orphan Black end up saving the life of its most beloved child, then attempt self-surgery of a variety that makes Cosima’s near self-injection several episodes earlier look tame? In short, she finally perceives the lie not just of Neolution, but of objectivism.

Rachel was raised on this ideology. When she was a child, adults were impressed because she could memorize six-character identification tags. Now that she’s a woman, Westmoreland trusts she will prove an “unwavering” follower, regardless of her “attachment” to Kira. What he fails to anticipate, however, is the impact of losing three successive father figures. First Ethan decided Rachel did not deserve him, then Leekie mysteriously disappeared, and now Westmoreland himself proves unreliable. The result is cataclysmic.

All three men failed to fathom how fully Rachel would come to embody cold calculation. Beyond implanting a love for literature — even if Rachel denies it as an adult — Ethan taught his adopted daughter math and science, the beauty of life under the microscope, of information assessed objectively. But once Dyad became her home, Rachel began to adopt the ideology of objectivism — not just science, but scientism. Numbers became not just a route to truth, but the only truth. That which was not testable, falsifiable, or replicable was not real.

Leekie also failed to anticipate the consequences of such dogma. Gleeful in his absorption by genetic details, he overlooked the costs of his technotranscendentalism, his vision of becoming “like gods” to Plato. In another of season five’s revealing flashbacks, Rachel had grown impatient in awaiting the death of another Leda clone, and thus accelerated the process. After completing an autopsy, the young scientist handed Leekie the results, proudly noting, “I took initiative.” Surprisingly, her second surrogate father was not pleased:

Leekie: “Oh my God, Rachel, you killed her.”

Rachel: “While you were sitting on your hands waiting for her to die naturally, when we need a cure. I won’t be shut out of my medical file. It’s my body.”

Leekie: “Her name is Miriam Johnson. She was creative, a musician.”

Rachel: “She was homeless. And the mother you put her with was a drunk. You raised me to be objective.”

Leekie: “Neolution raised you. Here. In a corporation. What are you?”

Notably, this is the same language used by Rachel, then Ira, to describe the creature in episode five. To them, Yanis was an “it,” a “what.” Ultimately, Rachel turns out to be little different. Leekie had a real fondness for her, but one always submissive to Neolution’s hierarchy. As he once told her during a gynecological exam, “You’re not exempt from the experiment, Rachel.”

Once Rachel grasps that Westmoreland has been the most duplicitous father of all, Orphan Black lets it all fly. The show’s enduring attack on sexism and racism reaches an intense climax with this episode’s metaphors. First, Neolution’s founder brings Rachel into his inner circle by pronouncing her his “daughter,” but the scene feels like the creepiest of marriage proposals. The old man asks, “Will you join me, at my side, to lead Neolution forward?,” and the young woman looks into his eyes, gasping, “Yes, yes!” What she did not quite realize then, however, is how much this will mean her silence and her submission, no matter what lies ahead. Then, we see Rachel’s ascendance represented again, this time in the language of a slave’s liberation. As she signs a formal contract and Westmoreland looks on, he soothes her, “You are no longer 779H41 or Neolution property. This document legally emancipates you. No more monitors. You’re free. You’re home.” These words could hardly be more bitingly ironic: Rachel is like a slave set “free,” only to begin an even more demanding life as a “paid” servant.

Westmoreland’s deceit begins to sink in as Rachel lies back for yet another physical evaluation, an unexpected endometrial biopsy with Virginia Coady. Nearby, a computer monitor shows Rachel’s patient records, still clearly marked “779H41.” The vertigo grows even more overwhelming hours later as she stares into the endless mirrors of the device in Westmoreland’s desk drawer. We quickly realize that the prosthetic eye Rachel received after her impalement in season two’s finale has been transmitting a continuous video feed to her so-called father — that he was able to promise her “no more monitors” only because her monitor is now implanted.

Still, this wasn’t enough to shatter glass. In shock, Rachel returns to Dyad, cooperating with Westmoreland’s instructions for the time being. What to do with yet another man who called her daughter, who claimed to have “shared all [his] secrets,” but withheld the detail about having a camera in her head? The answer finally becomes clear only as Rachel recognizes the extent to which Kira really is herself, merely a generation later. This girl too has been denied friendships; she too has needed to live in a state of constant suspicion.

There is a major empathetic shift involved here. Across most of Orphan Black’s plot, Rachel has compared herself to Sarah. Kira’s mother has been the “unmonitored tramp” who somehow proved fertile, the grifter mother who nearly surrendered to Dyad at the end of season one before learning “they could take Kira.” Like her biblical namesake, Rachel has long wept for children, lamenting her barrenness and attempting to steal Kira for herself. But now Rachel’s focus has shifted; instead of focusing on Sarah, she truly sees the young girl herself for the first time. This is Rachel’s opportunity to defy the patriarchy, to interrupt the cycle of exploitation.

In short, a great deal of Orphan Black is summed up with Kira’s question, “Who hurt you?”, and Rachel’s bitterly honest response, “All of them.” Why pluck out your own eye, why surrender the child you desired to the woman you hated? Only if your willing self-sacrifice can reverse the momentum of history. Only if you believe, as Ethan once quoted The Island of Doctor Moreau, that hate may be forgivable, but irresponsibility is not. 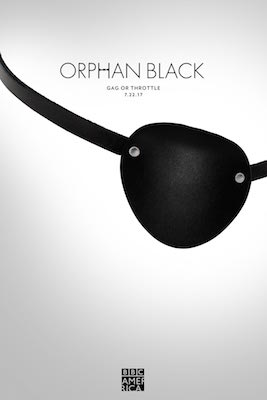