This is the fifth in a series of episode-by-episode reflections on Orphan Black season 5 (preview; episode 1 ; episode 2; episode 3; episode 4). These pieces do not provide thorough plot summaries but do include spoilers; they assume readers have already been viewers. Responses via  Twitter  continue to be very welcome!

And by the way, how are your parents, Cosima?

P.T. Westmoreland’s question during Orphan Black’s latest dinner party might seem incongruous, but it actually points to some of the final season’s core ideas.

Throughout the evening’s verbal jousting, Delphine silently implores her lover to back off. Cosima refuses. She is already deeply suspicious that Neolution’s architect is not all he pretends — certainly not 17 decades old. When he makes a reference to the taxidermal brilliance of his old friend Charles Darwin, Cosima fires back a reminder that Darwin also flunked out of med school. Then Westmoreland makes a strange connection: “Yes, he always felt that he had failed his physician father and his adoring mother. And by the way, how are your parents, Cosima?”

Why does Westmoreland suddenly ask about Cosima’s parents, who have never appeared on the show? The obvious answer is that this is another veiled threat: My reach extends even beyond your sestras. Don’t test me further. But for us as an audience, the question and Cosima’s halting response have even greater meaning. Her key words are these: “[T]hey’re in love. And they love me.” Just as Kira can report confidently on the sestras’ health at any given moment, Cosima knows this love in her bones. With all the relationship’s limitations, Cosima intuits her parents’ love deeply enough not to require immediate proof.

This is a core difference between Cosima and Rachel. It’s way more important than Cosima’s nose ring or Rachel’s high heels. Cosima is capable of trust. Rachel is not. Cosima can ultimately believe in another’s love. Rachel cannot.

(If regular readers of these pieces are wondering if I am losing hope for some form of partial redemption for Rachel … I’m afraid so.)

Juxtapose Cosima’s confidence about her parents’ love with Rachel’s words and facial expressions earlier in the episode. During the first reunion after their mother-daughter spat at the end of season four, Rachel and Susan Duncan start to put aside their differences, not for the sake of peace, but pragmatism. For Susan, Rachel represents not a truly separate individual, but her professional legacy. Thus she is willing to overlook Rachel’s betrayal: “I want my life’s work to go on for a very, very long time. That’s you, Rachel.” Meanwhile, Rachel’s message boils down to this: I told you so. “You didn’t think I could accomplish this,” Rachel gloats. “You said they would never respect me. That a clone couldn’t have autonomy.” She then drives home her triumph within Neolution by repeating the torture Delphine used on Rachel’s eye in season three, episode one. Pressing on the site of Susan’s knife wound, Rachel exults, “Make no mistake. P.T. put me at his right hand. Corporate runs the science.”

Rachel’s assertion of this hierarchy is closely tied to the show’s critique of patriarchy. Why is the financial bottom line the ultimate consideration for Dyad, Neolution, and their ilk, and scientific discovery only a means to that end? Because men — at least men like P.T. Westmoreland, Aldous Leekie, Henrik Johanssen, and Ferdinand Chevalier — are far less committed to science than to their own power trips. Yet Rachel does not recognize the incompatibility of this sexism and genuine scientific curiosity. In fact, as an even earlier scene in the episode indicates, she has bought wholeheartedly into Neolution’s pecking order, wanting nothing so much as Westmoreland’s approval. The reverent, absurdly childish look on her face after he injects her with Cosima’s inoculation says everything. Westmoreland says she “deserves” it; what Rachel hears is you are better, you are the best, you really are worthy. Unlike Cosima, she desperately requires a surrogate father to repeatedly confirm her value.

The distinction grows even more stark when we consider what Rachel asks about next — why Westmoreland does not merely “eradicate” season five’s mysterious creature rather than just “captur[ing] it.” The pronoun here is critical: Ari also ends up calling the creature a “thing,” and in his response, Westmoreland reduces the creature to “this mutation.” At various points he seems sentimental about his research subject, but ultimately he does exactly what Rachel recommends: he shoots the poor creature in the head. Cosima had refused to do so; he views himself as putting “it” out of “its” misery. We have learned otherwise; this man was once a Latvian orphan, and being found by Neolution was the worst fate possible. He is as much an “orphan black” as the Leda clones.

The basic difference between Cosima’s perspective and Rachel’s — fulfilled by Westmoreland — is that one views this man as a true subject, with personhood and agency, while the other makes the creature a mere object, appropriate for merciless manipulation. Of course the show’s fan base will side with Cosima, shouting in unison, “he’s a person!” Indeed. But Orphan Black suggests that the implications stretch beyond Frankensteinian and Moreauvian creatures to all of those who find themselves unwitting objects of big-data research. When Westmoreland condescendingly notes of Cosima, “What a delicate balance you have: the clinical and the humane,” he points again to what distinguishes her from Rachel. Cosima is no less committed to studying the material world—she is actually far more so — but whereas for Cosima the clinical motivates the humane, for Rachel and Westmoreland these remain opposed, incompatible categories.

The consequences could not be more enormous. One of episode five’s greatest delights is its return to one of the show’s foundational moments in season one, episode ten, when Cosima and Delphine discover the claim of ownership inscribed within the clones’ genomes. Brilliantly extending that scene, the show provides one of its most revealing answers yet to a basic philosophical question: if we agree that Cosima, Alison, Helena, and Sarah should be guaranteed the same rights afforded all other human beings, how exactly do we overcome Dyad’s contention that the clones are corporate property? Some might reject any claim to ownership of any form of life, or perhaps just “sentient life” (as difficult as that is to distinguish), but Orphan Black asserts its own unique set of criteria for ascribing personhood. Cosima agonizes, “I’m intellectual property … there’s nothing, nothing that’s mine … they own me.” Delphine’s answer, each element of which Cosima slowly repeats, immediately becomes one of the series’ pivotal declarations: “Not your integrity … not your intellect … not your humor.” In short, Cosima is her intangibles. None of these character traits are measurable. They do not lie within the domain of science. But they are no less real than Cosima’s genome or her disease. They are the most real things about her, the very reasons that Delphine and Clone Club fall so completely for her.

Some might call this argument sloppy, sentimental. It is anything but. Cosima’s core traits, the product of her most excruciating decisions, are what separate her dual commitment to science and humanism from Rachel’s scientism and corporatism. They are what make Cosima’s response to Yanis superior to Rachel’s and Westmoreland’s. They are what lead Cosima to protect Kira, when Rachel, Susan, and Westmoreland would treat her like a (spiny) lab rat. They are what hold Cosima tight to Delphine, recognizing that whereas Westmoreland and men like him “divide women,” they are strongest together, with all of their faults. These intangibles let Cosima see that while many treat the human genome as one more battlefield on which the elite may dominate the underprivileged, “it is never about one gene.” And these elements of Cosima’s soul are what separate her passion for science from the scene on Aisha’s book cover, with Westmoreland and his halo elevated above a group of dutiful, hands-folded girls. This is the same perverse spirit conveyed by the haunting singalong over the episode’s end credits: “We are all Revival’s children / How strong our bodies grow / Right here we can live forever / For death we will not know / We are all Revival’s children/ Come join the future now / Let science show us how.”

By now, Cosima has taught us that pseudo-religious, hyper-utopian revivalism is not science’s aim. Such fanaticism is only possible — or necessary — when “corporate runs the science.” It puts persons in cages. Like authentic faith, real science lets them out. 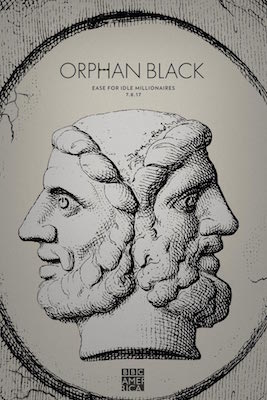