This is the third in a series of episode-by-episode reflections on Orphan Black season 5 (preview; episode 1; episode 2). These pieces do not provide thorough plot summaries but do include spoilers; they assume readers have already been viewers. Responses  via Twitter continue to be very welcome!

Why is Alison sick?

Not like Cosima is, not like Mika was. We haven’t seen any bloody coughs. Existentially sick. Spiritually sick.

The patient presents with a case of midlife crisis, purposelessness, exhaustion:

Just go back to my useless life like I’ve been told.

I am such a colossal failure at everything.

But later in the episode, there is a significant shift in tone:

I’m going to make myself useful for once.

I’ve been in this fight since the beginning … And I’m in it for the long haul.

I feel like I’ve been rattling around in my own skin for some time. And I think I finally popped loose.

How does the change happen? How does Alison start to get well? Instead of continuing to view herself as the victim of her surroundings, she confronts them. She takes on suburbia in both senses of the phrase. In a fascinating double movement, Alison simultaneously embraces and defies her community. She love-hates it.

I taught a seminar on literature, medicine, and biotechnology last semester in which Wendell Berry’s 1994 speech “Health is Membership” kept resurfacing. Our discussions often returned to this claim: “I believe that the community — in the fullest sense: a place and all its creatures — is the smallest unit of health and that to speak of the health of an isolated individual is a contradiction in terms.” Obviously, this claim has radical contemporary implications, particularly south of the Canadian border: it suggests the ongoing uselessness of imagining a health care system that is exclusive, that is content to leave some behind in the effort to protect others.

But in the context of Orphan Black, Berry’s insight means that we cannot assess Alison’s health without also examining Bailey Downs, the neighborhood of cookie-cutter mini-mansions in which she and her best friend Aynsley once enjoyed lives “filled with joy and kids and barbeques.” Back in the show’s present, Alison has let her friend die, barely sees her kids, and has lost her role as church fall fun festival coordinator.

Suburbia has long been the subject of film and television critiques. John Frankenheimer’s Seconds (1966) features a banker who is so unhappy with his upper-middle-class home and dutiful marriage that he enlists the services of a company to fake his death and (seemingly) start anew. American Beauty (1999) is one of cinema’s most poignant exposés of suburban lives of quiet desperation — male and female alike — and from there one can trace a direct line to the serial television masterpiece Breaking Bad (2008-13). The absurdism of these relatively serious dramas is also closely related to lighter, more consistently comedic treatments of suburbia in films like The Truman Show (1998) and Pleasantville (1998).

In many ways, Orphan Black’s stories about Alison and Donnie fit the latter category. In a show regularly lauded for its portrayal of grifters and drag queens, this soccer mom and her husband have regularly afforded comic relief. From hot glue torture sessions to underwear twerking, from Air Italia phone sex to Alison’s productions of Blood Ties and Jesus Christ Superstar, the warm colors and overwrought emotions of Team Hendrix scenes are Orphan Black at its most hilarious. These are also the scenes in which the show makes greatest use of Felix’s black humor and of Helena’s capacity to acquire refunds.

Which may make this next claim surprising: Alison may be the clone through which the show makes some of its most devastating and explicit cultural critiques. She is indisputably a creature of her suburban environment, but she is also that world’s clear-eyed judge. Consider her words to Aynsley at the height of the “intervention” held by her neighbors and pastor in season one, episode nine:

I thank you … for scrutinizing every detail of my life since the day I moved into this fishbowl. You have pried and snooped and gossiped about me like I was your own personal laboratory subject. How would you like it if I turned your life inside out? If I told all these people that Chad, your husband, slept with his spin instructor long before me? Well, maybe he acts that way because you BLEW the roofer at the cabin!

Or, less humorously but even more compellingly, what about school board candidate Hendrix’s speech in season three, episode seven? Here this adopter of two children from other cultures challenges suburbia’s readiness to go to any lengths with new building projects and redistricting proposals so that rich white kids can remain insulated from wider social problems:

Sometimes family is more than just the people under your roof. They’re people who jump in headfirst, who aren’t afraid to make fools of themselves to help you, who don’t hide their faces in shame if you fall down. If your family is suddenly bigger than you expected and your house gets too crowded, do you tell your family to find another place to live? You make room, you adapt, you find creative solutions to keep people together.

“Beneath Her Heart” features another such speech, and I will suggest that it is the episode’s hinge, the moment at which Allison “pop[s] loose” and begins to get well. Again, Alison flouts the ironic habit whereby those who have escaped inner-city problems of racial and socioeconomic difference turn on each other all the more viciously, even as they continue their addictions in secret. Immediately following the hilarity of Highland dancer Donnie collapsing onstage, the new fall festival organizer remarks, “Looks like they’re both alkies.” Alison goes on the attack, with no less ferocity than a Helena whose babies have been threatened:

I’m sorry, I may have my demons, but don’t you dare go after my Donnie. Now, I know exactly what you all think of me. Well, I’m not just a boozer, I’m a pill-popper, too. And half of you bought them from me. Don’t pretend you’re so innocent. You’re hypocrites! All of you, hypocrites! Nona, I see you. You know, I’ve given my heart to this community, and I can’t help but feel a little bit hurt that you’re pushing me to the side. But you know, I’ve atoned for my sins. And I have a life that is so much bigger than Bailey Downs. I am part of a sisterhood that you couldn’t even begin to understand.

Perhaps what is most remarkable about this speech is that it is not at all an uncontrolled outburst. Alison now knows herself at a depth far exceeding the self-realizations of her neighbors; she has reached a place of pride without pridefulness, honesty without rage. The power of this housewife is that she has become a truthteller, but she is not simply desperate. While the episode concludes with Alison’s admission to Donnie that she needs to “see who I am outside of all of this,” she can promise that her departure will be temporary because of how far she has already traveled. To adapt the words she and Donnie sing, they now know that there is no suburban neighborhood so emotionally violent that it could keep them apart for good.

One last thought about the particular suburb the Hendrixes inhabit. In recent episodes, we have laughed as Donnie pulls his wheeled suitcase through the forest in Beavertail National Park, just as in the show’s first season we chuckled over Alison’s obsessive efforts to sterilize Felix’s downtown loft. In these trips away from Bailey Downs, though, Orphan Black does not condemn suburbia. The impact is more like the wry lament in a 1997 piece of creative nonfiction by Allen Gurganus, a memorial to post-WWII suburban utopianism: “If I could only chart the frustrations of a Mom (IQ 143) asked to feel ‘creative’ sticking multicolored toothpicks into small blocks of orange cheese spread on a tray Sputnik-shaped. If I could now retrieve just half the nights Dad spent at the office, helping pay for all the formicaed grandeur he provided us …. Is this the revenge on us, and on our sleep — the revenge of those wild, ragged, native American, sacrificed Spaces in Between?”

Since Bailey Downs is not an actual American suburb, but a fictional Canadian one, perhaps it’s worth a speculative footnote. Orphan Black co-creator John Fawcett has used this name for a community before, in his horror film, Ginger Snaps (2000), and its sequel. In that story, a rural town is haunted by a werewolf known as The Beast of Bailey Downs, a creature that turns out to be as much a metaphor for puberty as a literal threat. Might there turn out to be a parallel character in Orphan Black? Alison? Helena? Or is this where the creature on Westmoreland’s island comes in? 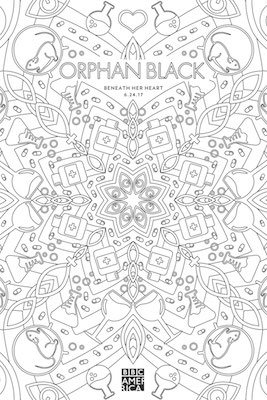