Is a burkini-clad Muslim woman on the cover of a magazine known for skimpy bikinis and objectified naked bodies of women a sign of progress and empowerment, or is it exploitative and oppressive? That seems to be the question on people’s minds after seeing Halima Aden, wearing a burkini, on the cover of the recent swimsuit edition of Sports Illustrated.

The response to the cover, so far, has been sharply split. There are those who believe that a burkini on the cover of Sports Illustrated represents progress and empowerment, indeed a shattering of perceptions — which is the theme of the edition. And there are those who believe that this is exploitative and manipulative on the part of the magazine and doesn’t do much to challenge stereotypes.

So which is it?

If we listen to the words of Halima Aden herself (in the various videos where she discusses this photoshoot, or on Twitter), we see that she finds the experience personally empowering and believes this development is “monumental.” She talks about being a seven-year-old girl flipping through magazines and not seeing anyone wearing the hijab. She has since gone on to become Miss Minnesota, land a cover on Vogue, and now Sports Illustrated — all while wearing a hijab. In a behind-the-scenes video for this photoshoot posted on the Sports Illustrated website, while looking over the pictures from her photoshoot, she gleefully declares at one point: “I am sexy!”

I do not doubt that the experience is liberating for Aden. I also do not doubt that for some women and young girls it is heartening to see a woman with dark skin wearing a hijab, walking the runway, or gracing a magazine cover.

Yet visibility does not mean empowerment, even though we know visibility and representation are crucial in challenging stereotypical views. Is this representation going to advance new understandings of Muslim women? Are people going to look at her image and stop making assumptions about Muslim women as oppressed? Will France or other Western nations become more accepting of the burkini on their beaches? Probably not.

To be fair, Halima Aden’s interviews do challenge the stereotype of a non-agentic Muslim woman. Aden has successfully demanded and held strong to the restrictions she imposes on her contracts and what she’ll wear; she travels independently; she is outspoken and determined. But a still photo in a magazine, which is likely to get much more attention than any of her interviews, is unable to capture who Aden is as a woman, and may inadvertently create new impositions on Muslim women.

What does the audience see in these photos of Aden wearing a hijab and burkini on the pages of Sports Illustrated? We see that Aden is “different” than other models — she wears a hijab and burkini. But we also see that she’s not really different — she poses seductively in the same kinds of poses that other nearly nude models are in; she wears make-up; she is slim, beautiful, with a bright smile. While she transgresses some ideals of beauty and self-presentation, she reinforces many others.

Or perhaps it is because she is reinforcing and upholding some of those other beauty ideals that she is able to transgress by wearing the burkini — and still be celebrated for it.

Thus, more disturbingly, I would argue that this new representation of a Muslim woman has the potential to impose further restrictions and expectations on Muslim women who wear the hijab. The hijab, currently met with uncertainty, disdain, and suspicion for being perceived as oppressive or as a symbol of radicalization, could become further subject to surveillance and scrutiny: you can wear the hijab — if  you also present yourself as a consumer of fashion, makeup, and sexiness. Soon there will be a right way — cute, attractive, beautiful, and sexy if you can swing it — and a wrong way — not wearing make-up, wearing dull colors, not being fashionable, being unattractive — to be a hijab-wearing Muslim woman.

The hijab, then, has become more and more important in defining a “true” or “authentic” version of Muslim womanhood. Other representations of Muslim women are left out or seen as “inauthentic.” But Islam, like any other religion, is practiced in a variety of ways. The Sports Illustrated photos of Aden create an understanding of the hijab as simultaneously more important than it should be, by reinforcing its status as the defining symbol of a Muslim woman’s identity, and less important than it is by implying that wearing a hijab doesn’t mean you have different values (you can still be sexy!). This, of course, is totally contrary to the motivations of many Muslim women who adopt the hijab in order to be modest and to avoid being objectified (among other motivations).

To be clear, as I said earlier, seeing an image of a woman in a hijab and burkini might resonate with some young girls and women who have never seen that represented before. And I certainly do not doubt that Aden herself feels empowered in the act, nor do I fault her for it. But we must distinguish between personal forms of empowerment and whether they translate to wider benefits for a marginalized community or group.

In the absence of challenges to discriminatory policies and behaviors towards Muslims, a fashionable, slim, attractive, sexy Muslim woman isn’t likely to change the way Muslims are treated. In fact, it may bring a new set of pressures and expectations for Muslim women to navigate. 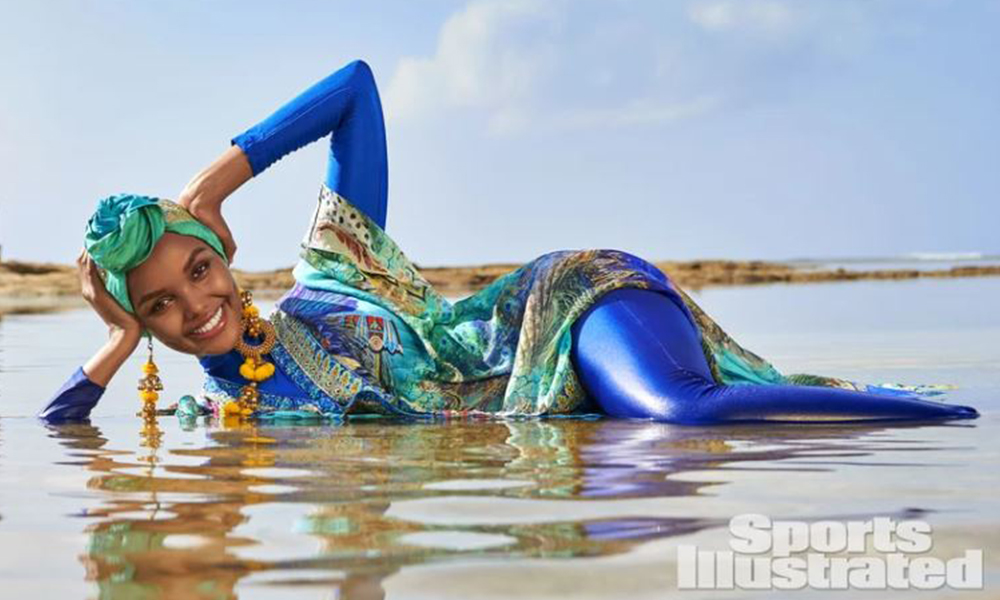