From the notorious Pepsi commercial and H&M’s video promoting their recycling project, to the cover of Vogue Arabia and CR Fashion Book, women donning the hijab are acquiring greater media visibility than ever before.

On the face of it, this is a welcome development. For decades, feminist scholars and activists have been working towards disrupting the trope of the Muslim women as silent, submissive, and somehow uniquely oppressed. The growing prevalence of these new images hints at the potential to re-shape imaginations and open up possibilities for Muslim women, particularly in the West.

Unfortunately, the reality is that these images are actually limiting and oppressive. Greater visibility does not automatically translate into emancipatory possibilities. Representations of Muslim girl- and woman-hood are congealing around two formulations. On one hand, Muslim women are being increasingly viewed as savvy consumers and empowered fashionistas; and on the other, as suspect, jihadi, and threatening. Not unlike prior framings, these representations are simply new modalities through which state and capitalist forces can advance the surveillance of Muslim women or make profits off of them.

Consider the figure of the “jihadi bride,” which has recently appeared in transnational media and policy networks. The phrase describes young European women who have joined, or plan to join, Daesh. Once they have traveled to Daesh territories they often marry fighters and take on the role of a wife and mother, contributing to the cause through their reproductive labor.

In a BBC documentary, Britain’s Jihadi Brides, we learn about the tactics recruiters use to entice intelligent yet immature teenage girls to join the organization. The jihadi bride conjures societal anxieties around adolescent sexuality linked to reproduction — after all, these girls are recruited into roles as mothers and wives, not as fighters — and assumptions about the sexual appetite of “the jihadi.”

These frames work together to depict the jihadi bride as a youthful subject who, while suspect, deserves the care and protection of the state. She is no longer a racialized Muslim who is the subject of surveillance within Britain but rather a “British schoolgirl” — a gullible, national subject, whose sexuality must be protected. She activates national pride because she is assumed to represent British-ness to the jihadis. That they are able to dupe young girls into leaving is then viewed as a national affront. Therefore, even as her actions are viewed as threatening national security, she is seen as a salvageable subject. Once retrieved, however, she is subjected to severe forms of disciplining and surveillance.

We also have the figure of the female jihadist, a term often used to describe Muslim women who have launched attacks in Western contexts (most recently in California and Paris). She is viewed as abject and dangerous, an intimate threat. An examination of the media archives of Tashfeen Malik, who participated in the attacks in San Bernardino, California, shows how her education in Pakistan and upbringing in Saudi Arabia were seen as pivotal moments in transforming her into a “jihadi.” Her marking as a “feminist” points to her autonomy. As a New York Times article notes, “the threat is coming from a more independent, feminist type of jihadist, who sees herself as acting similarly to a man…” Unlike the jihadi bride, this image of the Muslim women is considered to be mature, in-control, and hence, a culprit.

The figures of the jihadi bride and female jihadi mark all young Muslim women and girls in the West as potential- or pre-jihadi and suspect. Indeed, attacks on Muslim girls such as the 17-year-old Nabra Hassanen in Virginia stem out of this perceived threat that the hijab-donning woman/girl seems to embody. This assumption of latent but present threat has also lead to the creation of state-run anti-radicalization programs in schools such as Prevent in the UK and the FBI’s Don’t Be a Puppet in the US, which erode the human rights of young Muslims.

This collective imagination of Muslim women as suspect has also given rise to a new field of knowledge and a new cadre of experts focusing on women and violent extremism. Organizations such as the United Institute of Peace, United Nations and Council for Foreign Relations, for instance, are now hosting panels on the topic, hiring experts, and publishing reports. This figuration of the Muslim woman is now a lucrative funding and programming stream.

Formulations of Muslim women as oppressed by their religion and Muslim men, however, have not lost their potency. To the contrary, they continue to have robust political function. During his election campaign, Donald Trump activated the trope of the silent Muslim woman by criticizing Ghazala Khan, the Pakistani American mother of U.S. Army Captain Humayun Khan, who was killed in 2004 in Iraq. Khan and her husband spoke at the Democratic National Convention, during which she was quiet. Trump remarked, “If you look at his wife, she was standing there. She had nothing to say. She probably … maybe she wasn’t allowed to have anything to say. You tell me.” Trump pointed to prevailing knowledges about Muslim women’s oppression to add fodder to his prior claims about Islam being alien to American values and calls for banning Muslims. Khan later said that she was too emotional to speak on stage.

In the most recent iteration of the executive order on “Protecting the Nation from Foreign Terrorist Entry into the United States,” victimization of Muslim women is invoked to garner support for greater policing and regulation of Muslims in America. It commits the Trump administration to make publicly available every 180 days news about the “number and types of acts of gender-based violence against women, including honor killings, in the United States by foreign nationals.” It thus deploys the trope of “honor killings” to cast foreign-born immigrants — primarily from Muslim countries — as suspect.

Muslim women’s oppression and assumptions around Muslim men’s violence continue to be utilized to establish the superiority of Americans, and mark Muslims as having a unique propensity to both engage in and tolerate harm done to female bodies.

These destructive formulations about Muslim women have also opened up a space for alternate articulations of Muslim women that are more positive and affirming. While Muslim women are active in claiming that space, and rightfully so, it is also being captured by capitalist entities that see in Muslim women yet another consumer.

Recent overtures in this space can be seen by Nike Inc., Dolce & Gabbana, and H&M, among others, that have launched hijab and abaya lines, and magazines such as Vogue Arabia featuring hijab-wearing models. Such moves are widely celebrated for being inclusive. However, critics argue that it is business interests that motivate these efforts towards inclusion — after all, it is the bottom line that drives businesses. Featuring hijab-clad models is yet another way for corporations to claim feminism’s positive affects without really committing to its political import.

Such practices are bringing into effect a particular kind of Muslim woman: a hijab-clad fashionista. She is often young, gorgeous, stylish, adept in high fashion, and can afford the prohibitively expensive abaya (some D&G abayas retail for upwards of $7,000).

This figure of the “Muslim fashionista” is welcomed in Western contexts because she is just like “us” — she cares about her appearance and consumes high-end products; she is empowered. While some Muslim women can indeed occupy this position and feel its empowering consequences, it is a cruel and limited space, not accessible by (and perhaps, not even desired by) a majority of Muslim women and girls. There are scores of stories of Muslim women and girls in inexpensive hijabs, abayas, and burkinis, being harassed by the state — as well as fellow citizens — for their attire.

The new visibility of Muslim women and girls is not necessarily emancipatory. The emergent articulations of the jihadi bride, the feminist jihadi, the high-end consumer, and the fashionista are simply new modalities through which state and capitalist forces advance the policing and surveillance of Muslim women. These new positions, in fact, operate in remarkably similar ways as earlier ones. Assumptions about Muslim women as the “new suspect” fit well with anxieties linked to national security and pave the way for inhumane treatment of Muslim women. And Muslim fashionistas blunt the political import of feminism by reducing empowerment to shopping.

Against this background, it becomes imperative to not be too quick to celebrate the greater visibility of Muslim women in media and policy discourses. It is crucial for us to scrutinize what this visibility is doing, and to carefully analyze the possibilities as well as limitations that are being unfolded in the process. 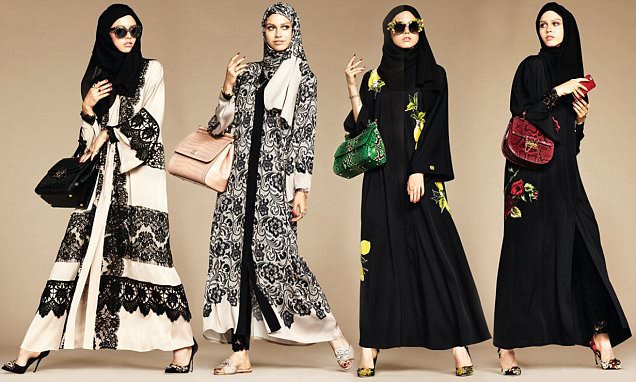