As my last China Blog column was on China’s forgotten World War I, I decided that an examination of the country’s involvement in World War II would make for a logical follow-up post. There’s no one better to discuss this topic than Oxford historian Rana Mitter, author of Forgotten Ally: China’s World War II, 1937–1945, newly out in paperback. In this sweeping but highly readable history, Mitter traces the story of China’s eight-year battle against the Japanese—a conflict that continues to resonate in Sino-Japanese relations today, yet which has been largely forgotten on the global stage. I sent a few questions to Mitter, who responded by email.

MEC: Why did you decide to write a book on China in World War II, and how did you go about researching it?

RM: You just need to go into any bookstore (assuming your town still has one) and look on the shelves under World War II: Nazi Germany, the Pacific, D-Day, the shelves are groaning under the weight of books on the topic, with more to come. Yet it seemed to me that one part of the story was missing: the story of China in World War II is simply not there. Of course there has been fantastic scholarship about many aspects of World War II in China, for instance within the last few years by scholars such as Cambridge’s Hans van de Ven, Arizona State University’s Steve Mackinnon and UBC’s Diana Lary. But I wanted to do something quite comprehensive, bringing together the domestic and international, the story from the point of view of the major political actors as well as the ordinary people of China. I should also stress that the book isn’t primarily military history — though of course military matters are crucial to it — rather it’s the attempt to tell the story of what happened during the war and why it changed China and the world. And the raw statistics — more than 14 million Chinese dead, over 80 million refugees — give some idea of the scale of what the conflict did to China.

MEC: Forgotten Ally looks at three Chinese leaders during the war — the well-known Chiang Kai-shek and Mao Zedong, and the infamous-in-China Wang Jingwei, once a prominent nationalist and revolutionary who is now condemned as a traitor for cooperating with the Japanese. Wang’s story, even among historians, is not widely known. What are some of the key points about him that you hope readers will take away from your book?

RM: I’ve found that when readers tackle the book, it’s the story of Wang Jingwei that they find compelling. We tend to concentrate on winners in history and I’ve always been interested in losers. I wanted to make sure that we understood Wang Jingwei — sometimes called the Petain or Laval of China — in his own terms. He’s now condemned in Chinese historiography because he defected to collaborate with the Japanese in 1938, and set up a client regime under their control in Nanjing in 1940. But we have available the diary of Zhou Fohai, one of his closest associates, who followed him every step of the way on his defection. And what’s fascinating is that Wang and Zhou thought of themselves as the true nationalists — they saw Chiang and Mao as just as bad as each other for fighting a war that seemed unwinnable, and for taking assistance from the USSR. (Why, Wang asked, was it acceptable to seek help from Soviet communists who wanted to undermine China but not from the Japanese?) I think Wang made the wrong choice and his understanding of Japanese intentions was pitifully naïve. But I would also like readers to understand that he made his choices without the benefit of hindsight, and that although he was clearly driven by personal ambition, he did also see himself as trying to restore some vestige of nationalist standing to China at a time when its enemy seemed very likely to conquer all of its territory.

MEC: In recent years, we’ve seen a move toward the rehabilitation of Chiang Kai-shek in mainland China (after six decades of demonization), as historical sites and state media give Chiang credit for his leadership during the war. Do you think Wang Jingwei will ever receive the same sort of reevaluation, or is the “traitor” label too hard to shake, despite his earlier revolutionary activities?

RM: One extraordinary thing, for those who knew Cold War China, is the major if unstated rehabilitation of Chiang Kai-shek, the Nationalist leader and Mao’s old enemy. Nowadays his role in China as an opponent of Japan during the war is given a great deal of credit (and my own account of this has just appeared in China as this book’s mainland translation has just appeared). His birthplace in Xikou, in Zhejiang province, is quite a shrine to him these days. But I don’t think Wang Jingwei will ever gain that sort of revisionist position. In the immediate term, it’s impossible because relations between China and Japan over history matters are so poor. In the longer term, I think the best that Wang can hope for is that people understand his motivations even if they don’t agree with them — which is what I’ve tried to do.

MEC: Relations between China and Japan have been troubled for many years now, in part because of disputes over events during World War II and their treatment by historians and the governments in both countries over the following decades. If you could offer some advice to the Chinese and Japanese governments with an eye toward resolving these tensions, what would it be?

RM: The main specific lesson is for both sides to understand the position from the other side. China is rightly angry because of the attempt by parts of the Japanese right to downplay their war crimes and atrocities. But this means that China too often ignores the fact that there is a significant liberal community in Japan which fights back against these misrepresentations. Nor is there much acknowledgement in China that a democracy like Japan finds it’s easier to allow a variety of views, and one set of views, however disturbing, cannot be used to represent the whole. In Japan, the section of the public sphere that seeks to downplay Japanese behavior in China during the war needs to come to terms with the historical reality: an imperialist Japan committed grave atrocities in wartime China. Both sides need a dialogue driven by genuine  historical inquiry — which often means uncomfortable answers — rather than shouting from the comfort of their own political positions. 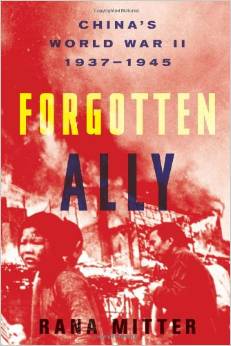