Last week, Facebook reminded me that I have been friends with a certain poet for three years. Facebook likes to do things like this, because it reinforces the illusion that we are not alone in this universe, but there are no photos of the two of us together on the short video that popped up in my feed — just one photo of me, and one of the poet, in a room with what looks like a high, wooden ceiling, wearing a cap with the words “New York” written across it. I can’t tell where this photo was taken, but I know where my photo was taken — in an alleyway of Jaffa, by photographer Heidi Levine. The poet I am friends with is looking down; I am looking straight into the camera, and I remember feeling terribly self-conscious at the time the photo was taken.

A flock of vocabulary jostles at my window, hammers at my door. I hide under a pillow of vacuity, of emptiness.

This poet and I live barely 40 miles away from each other, but we’ve never met in person. We live under the same sky, and we have the same weather — particularly hot in this part of the Middle East. The reason is simple: He lives in Gaza and I live in Israel.

I want to be innocent of every line I ever wrote, I want to cry on every hand that ever hovered over the cover of a book. A flock of vocabulary jostles at my window, hammers at my heart.

Three years ago, when rockets fell in Israel and missiles pounded Gaza, the aftershocks could be felt near my village in the Ella Valley. Israeli warplanes regularly swooped over my house on their way to missile attacks on Gaza. We’ve never met and I doubt we’ll be meeting in the near future — the Palestinian-Israeli conflict has seen to that.

Luminescent music flows from the clock, the tired painting, the drinking glasses, flows from our trifling hands caught in a sudden embrace, flows from the ceiling of the room like blue rain, drenching us with unending songs, a love that everyone talks of, but no one has seen.

So does love resemble you, oh God?

Years ago, when I worked for Newsweek, I entered and exited the Gaza Strip on several occasions. I met many people on those trips, I walked along the streets of Gaza City and I visited the beach there. In this I am privileged, not because the streets are beautiful, because they’re not, but because of the very fact that I was able to travel freely. Today, the Gaza Strip is besieged, sealed up. Its citizens are not allowed out; and very few people are allowed in. No summer vacations abroad, no visiting relatives in neighbouring countries, no studies abroad, no opportunity to experience other lives in other places. Add to this the fact that Gaza is presently supplied a mere four hours a day of electricity, and that an estimated 96 percent of water supplied to Gaza is undrinkable, and you begin to appreciate the humanitarian disaster just waiting to happen there.

Every night the gazelle in the painting descends, pauses to graze in the meadow of my dreams, drinks tears from the palms of my hands and carries my sigh to a faraway house in the hills beyond. It is not strange, this disconcertion, and I sleep through my dream like a fragrant herb on the edge of a garden, like fatigue in the dead of night, nor is it strange that the gazelle brushes past me when I invoke her name — breathless from singing, giddy with audacity.

His name is Nasser Rabah. We met online the summer in which the Palestinian-Israeli conflict burgeoned into another war. Operation Protective Edge, launched by Israel against Hamas militants, claimed more than 2000 lives in Gaza that summer. Thousands more were injured, and extensive damage was wreaked on the 140 square mile area that comprises the Gaza Strip. There were Israeli casualties, too; it was a grim summer.

I came across Nasser through a mutual acquaintance on Facebook. I was intrigued to read poetry from Gaza, and surprised to learn that some of his poetry had been translated into other languages, although not English. I thought about it for a couple of days and then, on August 11, 2014, I sent him a request to be friends. I wasn’t sure he would ever respond, or that he would want to be friends with me, since it’s easy to determine I live in Israel. But he accepted, and I got a little message: You and Nasser Rabah are now connected on Facebook.

We began to chat on messenger. Over the months, we talked about our work, our families, our children. He has five children; I have three. He sent me a few poems in Arabic, along with their translations into Hebrew and French. I read them slowly, my finger moving painstakingly from word to word, line to line, stanza to stanza. Eventually I could hear his voice, one I have never actually heard, transcending the Erez checkpoint that divides Israel from Gaza, crossing over the border with Egypt, rising above the water of the Mediterranean Sea that laps at the sand of the beach at Gaza and then moves off.

A journey runs and a clock stops.
A river gathers up its belongings in my punctured pocket.
Night gnaws at my days, takes its leave, and a clock stops.
Cities inhale gunpowder and fatigue, dreaming of birds.
No flag flutters for me,
No bird alights upon the window.
I am a clock on the wall.

I wanted people in the English-speaking word to hear his voice, too, so I sat with Sabine Hunyh, another literary translator, and we drank tea in her apartment in Tel Aviv and translated his words into English using her French and my Hebrew. Finally, I sent the original and the translation to Julie Yelle, a translator from Arabic who I met at a conference in Vermont, and who lives in DC. When the poems were finally ready, I submitted them to two anthologies, with Nasser’s permission. Both were accepted.

I asked him for more poems.

Oh longing: Do not linger shyly on the doorstep. You were never absent, never a fleeting visitor. Oh one who stretches out like a grape trellis, you eat the air whenever we breathe, you drink the forgotten dew, the stories and words left behind after evening has slipped away, here oh longing, here I sit you down, flipping through the notebook of family trees, pictures of birds, and you here, oh longing, excavate my silence.

At the height of the hostilities between Gaza and Israel, I wrote an essay in the Los Angeles Review of Books about people I know on both sides of the border. A poet with whom I gave a poetry reading in DC a few years ago, lashed into me with words that still sting today:

“I am so sick of your breed of poets,” he wrote. “This is not a moment for the mincing of words. Joanna, this is a moment of absolute clarity…the language we use must be as sharp and brave as Naomi Wolf’s dispatches.”

I read these words again, and I think that, for once, I am not going to apologize for living where I do. I did not come here by my own choice, but that is irrelevant. To leave this country would be the easy option. To leave it all behind and to watch it burn from afar would not require much effort. From afar, I could point the finger, I could lean back in my comfortable swivel chair and rant and rage. I could hold up posters at marches, I could accuse others of complacency. Instead, I am attempting to carry out a dialogue, a quiet one, with others. I am not the only one, there are plenty of others like me, who disagree with Israel’s policy and who are trying to make a change, a small but realistic one, from within.

For whom toll the bells of my soul?
For speech, flocking to the dust that clings to the window each day.
For the cloud, sleeping on the sidewalk of writing for two years, three, never crossing over.
For the circles of a lake, into which I throw the stones of my heart, still sleeping.
For the bread our sullied dreams queue up for, as hunger lengthens?

There are others writing today in Gaza, many in English. There is a group of young writers, for example, presently being mentored online by established writers from abroad through a program called “We Are Not Numbers.” And there is 24-year old Mosab abu Toha who lives in Gaza and who is raising money to establish a library in English to replace the many libraries destroyed in the past few years. Abu Toha has received books from people all over the world, including Israel, people who appreciate the value of books when all else fails.

I know that when I leave the house things return to their natural state: a debris of questions crawls up the walls, a library swims across the table.

In a recent essay in the New Yorker, Louis Menand asks if poetry can change lives. One of his conclusions is this: “Don’t expect too much out of any one thing. For although the world is hard, words matter. Rock beats scissors. It may take a while, but paper beats rock. At least we hope so.” I don’t know if paper beats rock, but I do know one thing: reading and writing is essential if we are to find the shimmer in both our own lives and those of others.

They passed you by, all of them —
the handsome ones, the ugly ones, the innocent, the evil, the mattresses, songs, rivers, wishes, the dead passing like water through a basket of straw.
The water was water, the basket shimmered.

Yes, words do matter. We must not pass them by. These words will not heal the world, but they can soothe, they can travel across borders and concrete walls, and they can be heard, if only someone is listening.

Header image:  A man with a donkey cart passes by a dead donkey and homes that have been destroyed in the neighborhood of Zeitune in Gaza, January 19,2008 during the Operation Cast Lead. (Photo by Heidi Levine/Sipa Press). 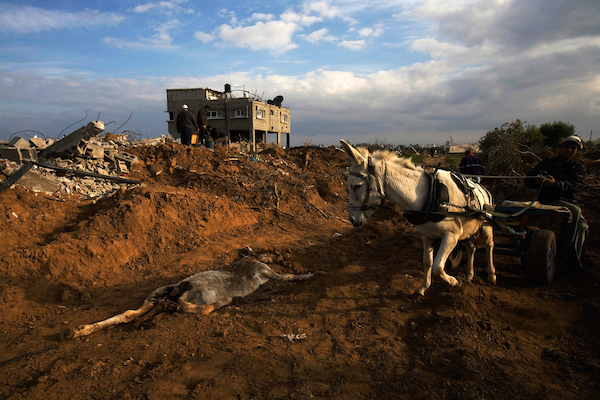