Rachel Eliza Griffiths is an award-winning multi-media artist, poet, photographer, and writer of essays and fiction. She is the author of Miracle Arrhythmia (Willow Books 2010), The Requited Distance (The Sheep Meadow Press 2011), Mule & Pear (New Issues Poetry & Prose 2011), and Lighting the Shadow (Four Way Books 2015). Her next book, Seeing the Body, will be published by W. W. Norton in June 2020.

She is also a very generous person. I first contacted Griffiths a few months ago when a student in my literary translation class asked if I had the full text of “The Human Zoo”, a poem from her last book, a fragment of which my student came across online. I wrote Griffiths, asking if she could send me the rest of the poem. To be honest, I half-expected her not to answer. In fact, she wrote me right back, attaching “The Human Zoo” in its entirety, and told me she would be honored to have a poem of hers translated into another language. And if this wasn’t enough, she later sent me an audio clip of her thoughts on translation.

Some of these thoughts I have incorporated below into a conversation we had on Skype last week. Griffiths had just stepped off a plane; she was speaking to me from her hotel room in New Orleans, where she had arrived to document Dread Scott’s reenactment of the 26-mile rebellion march taken 200 years ago by black slaves. “I don’t know what I’ll find,” she told me, leaning close into the screen of her laptop, “but I’m here.”

JOANNA CHEN: Will this be a form of witnessing?

RACHEL ELIZA GRIFFITHS: I think when you witness something in your own voice, so to speak, in your body, it lives in you in a certain way. You carry it wherever you go, you understand you have a right to your own memory and your own narrative about what you’ve witnessed. It’s meaningful because it happened to you — and you hold it and you carry it. There are so many poets, visual artists, and musicians who conjure up events and feelings that happened before I was even born. I carry James Baldwin with me. I carry Toni Morrison with me, and I’m grateful for it. Witnessing is not this anonymous thing. It always has a voice. It has a certain kind of singularity to it.

There’s a poem that appears in your next book that I’m carrying with me right now: “Whipping Tree.” In this poem you write that you are “trying to translate a word / that glows like a chain.”

I was on a tour with the poet Tracy K. Smith. She had asked if I would be the image designer for her upcoming libretto “Castor and Patience” — and that involved us traveling. We spent some days traveling around Savannah and Hilton Head. It was like going back in time, and going back into the Gullah Geechee language. I fear that in two or three decades those people may not be here to speak that language and there may not be people here to help us understand how important the history and culture of the Gullah people is.

What was the trigger for this outstanding poem?

On the last day of our tour in Savannah we came to a cemetery. It was once a plantation — and when it became a cemetery it was divided, it was segregated — white part, black part — which is ridiculous for dead people, but that’s what it was. There was a cluster of trees in this cemetery, one of which is called “the whipping tree,” and sitting here right now in New Orleans it makes me almost tear up to think about this kind of memory of our American history. I guess this tree was quite young when it happened — slaves were bound to it and lashed with whips. The brutality of these lashings left lacerations in the tree. You can actually see which way the lash hit the human body, a black body, hitting the body so hard that it left marks on the tree. The bodies are gone, probably buried in the cemetery, but the marks remain on the tree. Today this tree is the language. The only redemptive part of this is that the tree continued to grow in spite of everything. None of us could talk afterwards. It was so deafening to look at the tree and see this. 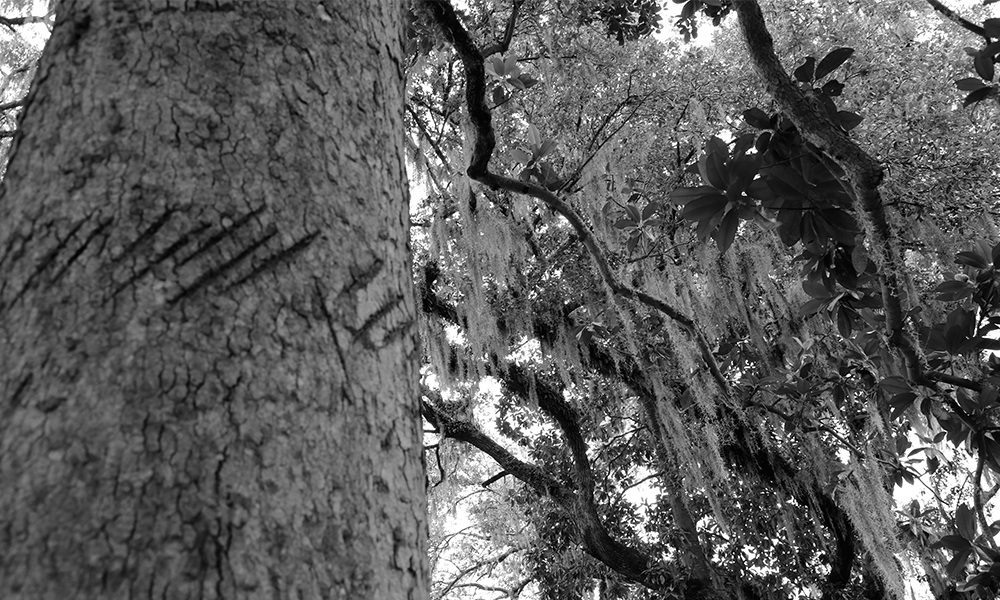 When did you finally sit down and write about it?

Only months later. I kept thinking: I’m going to write about the whipping tree. And I would see nothing — just white space — and when I did write about it I was in a very beautiful place, Cativa, in the Gulf of Mexico, surrounded by jungle, and very free trees, and art, and water was nearby, and life, and I thought, only here can I get near to what I want to say about the tree. I printed the photographs I’d made of that tree and put them up on the wall and I kept looking at them. I felt I had to reclaim this — to think of those bodies that are like mine, tied to that gorgeous tree. And that’s when I wrote the poem.

I love that you express yourself through a variety of mediums.

I like to experiment. If I have a phrase I think might be a poem, I might see what it looks like visually — it’s almost like having dishes in a laboratory — I might see what happens if I try to photograph this phrase before I put it in a poem and vice-a-versa.

You’ve said you wouldn’t be the poet you are today without translators.

Half of my favorite poems I only have access to because of literary translation — Rilke’s world, for example. I wouldn’t be able to enter these worlds without translators. There’s an energy with translations, a passion to have an exchange that’s really important for the rest of the world to listen in on. It’s a mysterious, exacting, demanding process. Unfortunately, literary translation has not yet gotten its dues in the world, but I feel as though in the last 10 to 15 years I’ve seen such a difference in the energy and tenacity of translators. I encourage the poets I teach to get involved as much as they can with translation, that there’s a really serious commitment to it — the research and the knowledge and the pushing and challenging of one’s self to get as close to the bone of the original language as possible while recognizing the difficulties and challenges, but also the beautiful openings that translation allows us to meet each other in.

Lorca is one of my favorite poets. Machado, Milosz, and also Cavafy, Neruda, Szymborska — all of them give a sense of the world.

When you say “a sense of the world,” what exactly do you mean?

It makes me think and imagine a very different perspective that comes together in a way that it would not come if I only relied on the American perspective, which I find very claustrophobic, for me, in terms of identity, and very frustrating at times. Having said that, I feel limitless in my own expansion of my identity and the different selves that I am.

How does all this manifest itself in your forthcoming book?

Seeing the Body has photographs as well as poetry — it’s the first time I’ve ever brought my photographs and poetry together. In Lighting the Shadow I started to visualize in language. The actual title Lighting the Shadow has different resonances for me, but one of those is my identity as a photographer — and the acceptance of a kind of gray world that is necessary to see — whereas if I have all black I have no image. If I have all light, I have no image but it’s in that grey nuance and that dimension that images, surfaces, and faces can be seen, and landscape and all these different things. In Seeing the Body there are now literal photographs — all of them are self- portraits that make up one section of the book. There’s no text around it, just the images, which feels terrifying to me.

Terrifying is a strong word to use.

Well, I think to have a section of a book of poems that is all image and it’s all your body, it’s all you, I feel quite vulnerable — and at the same time this was a moment where I knew there had to be a section of images and I knew that I had to not try to narrate or write illustrative notes about the images, not even titles, because I didn’t want to control them and I don’t want to control the person who looks at the images and tell them what they see. They can enter the photographs or not, on their own terms — and I’ll be waiting.

What would you like to tell me about Seeing the Body?

The book is about my mother who died in 2015, two weeks after I turned in Lighting the Shadow to my editor. Seeing the Body is a book about my own transformation, of being in the world in a kind of motherless way, coming to grips with a lot of different things in my life. Most of the poems are about my relationship with my mother and there’s also a section about American identity and what was happening around me while I was working on the poems: Mike Brown, Eric Garner. All this was happening while I was trying to grieve for my mother. So, there was the very private grief that I was experiencing and also a very public grief and rage that appears in the book. My struggle of being in the world during those years makes me feel very exposed in this book, I feel it’s very different territory for me, I just got the copyedits back. It’s always an exciting  moment to think, wow, this is going to be a book. And it’s helped me to be close to my mother again and to think of her life, her humor, and her courage. She’s always near me, so I’m very happy about that.

I think she’d be really proud of you.

I’m definitely crying right now but I’m comfortable with that. You know, I’m in New Orleans and I’m making art, and things are great and I’m crying and that’s life. 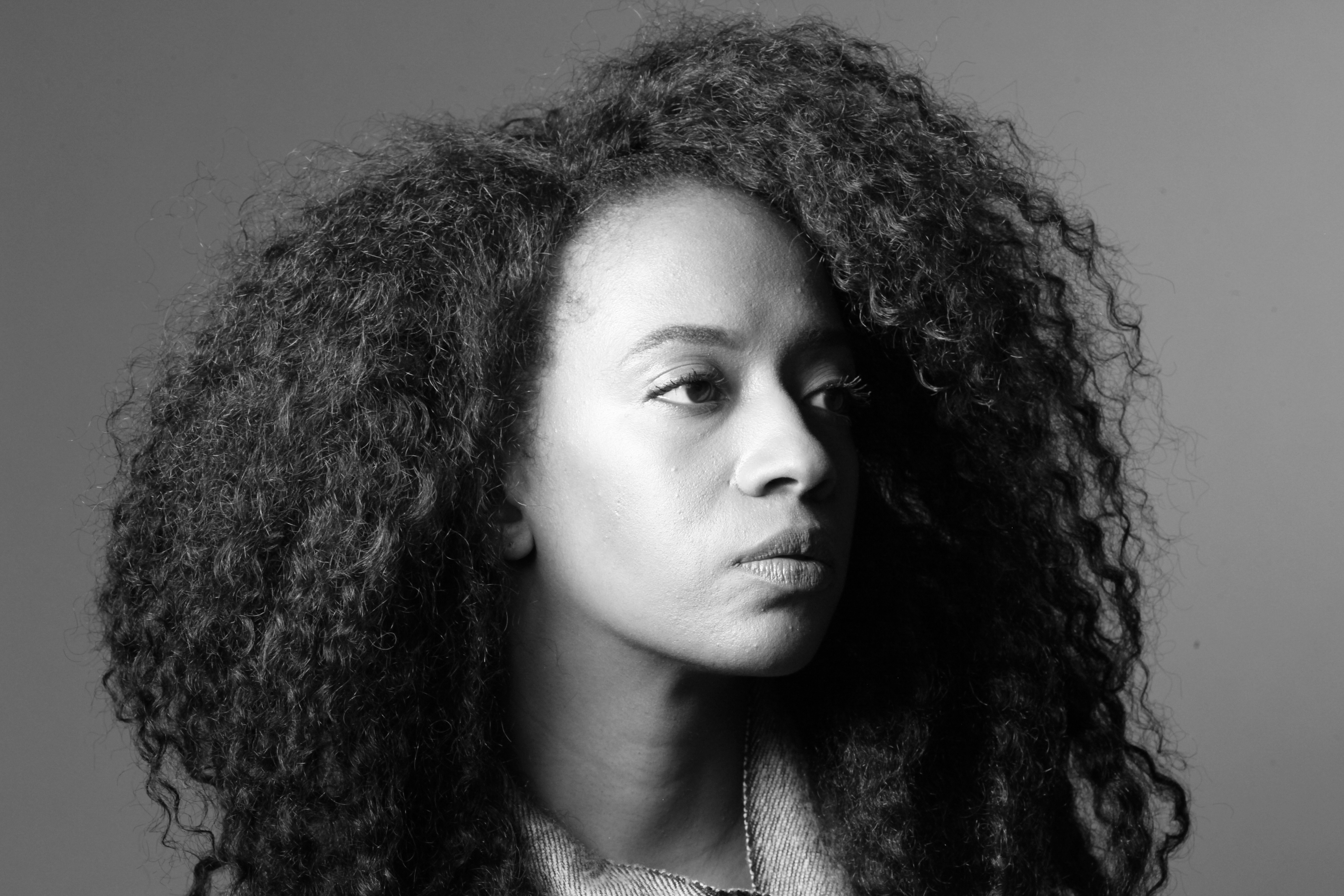