“Things in Seoul don’t have anything to do with each other.” We members of the Royal Asiatic Society Korea Branch (왕립아세아학회한국지부) heard this important principle for understanding the Korean capital early in the day from our guide, Robert Fouser. A noted American scholar of linguistics and architecture, he’d come to town to promote a couple new books he has out. He wrote them in Korean, a language that, during the years he spend living in Japan, he also taught — in Japanese. Just as none can doubt his experience with east Asian languages, none can doubt his experience with east Asian architecture, or at least his experience with traditional Korean houses, known as hanok (한옥), one of which he spent serious time and effort restoring to not just sound but fully authentic condition.

The word “authentic” came up more than a few times on the walk, which took us deep into Seoul, beginning at the Jongmyo Shrine. Between its construction in the late 14th century and its arrival on UNESCO’s list of World Heritage Sites in 1995, the place has seen some hard times, up to and including destruction during the Japanese invasions of 1592 and 1598. Rebuilt in 1601, the Jongmyo Shrine counts as one of the oldest building complexes in Seoul, a city where most historical structures have been torn down and put back up again much more recently, in the 19th, 20th, or even 21st centuries. But which can make the claim to greater authenticity: those rebuilt longer ago, or those rebuilt more recently with closer adherence to their original architectural plans? 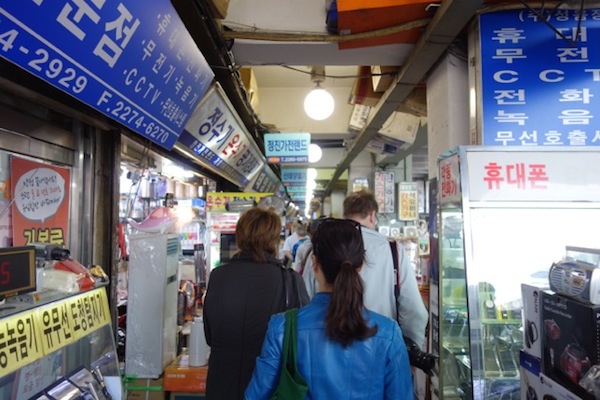 People disagree about that question in Korea, but only recently has the debate risen to a high profile. For a long time after the Korean War, anything old suffered from shameful associations with poverty, backwardness, and underdevelopment; even in the 1980s, when Fouser first arrived in Korea as a student, tourists could roam sites like the Jongmyo Shrine more or less freely. But on our walk, we found sign after sign telling us where we couldn’t go, and watchful supervisors ready to let us have it the moment we set foot on any now-forbidden stone. The Joseon Dynasty (조선 시대), the kingdom of the united Korea that lasted from the late 14th until the late 19th century has, it seems, become fashionable.

The Jongmyo Shrine even had construction going on right outside its gate, a project, from what I heard, meant to make the approach look more appropriately historical — to 21st-century eyes, at least. After passing the men at work, we immediately entered the domain of men not at work: Jongmyo Park, where hundreds of elderly pensioners, whose wives have passed on or who never married in the first place, gather every day to chat, drink, play a game of go, or — so it’s been reported — buy a few minutes’ good time with a Bacchus lady. (Not that it happens too far out of the public eye; this year saw the festival debut of E J-yong’s controversy-guaranteed feature on the subject, titled The Bacchus Lady in English and 죽여주는 여자, literally Killer Woman, in Korean.) 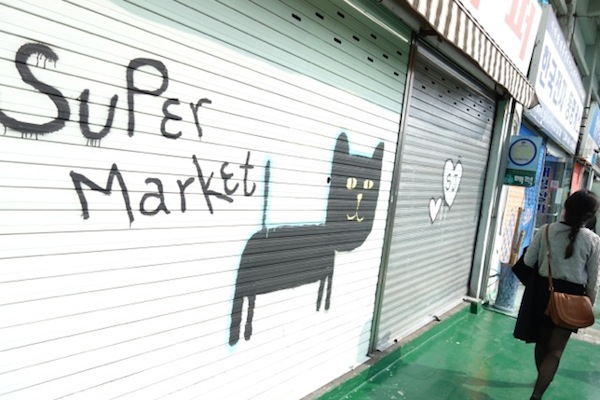 Just past those whose Korea’s economic miracle has passed over, we found a set of buildings the country’s development has left behind: the Seun Sangga (세운상가) Shopping Center, Korea’s first mixed-use residential and commercial complex. Ordered up in 1966 by construction-minded Seoul mayor Kim Hyon-ok (who earned the nickname “the Bulldozer” during his short four years in office) and designed by Kim Swoo-geun, one of Korea’s few well-known modern architects, it became popular in the 1980s as an electronics mecca, a training ground for internationally famous video artist Nam June Paik’s technicians as well as a place for Koreans to buy their first personal computers, cheaply pre-loaded with pirated software. (Not that “pirated” meant much in this country back then, a time and place without enforcement of international copyright law.)

It also became well-known for its plentitude of adult materials for sale, a market that Korea’s rapid adoption of information technology has certainly done its part to decimate. More recently, the left-wing newspaper Hankyoreh described Seun Sangga as “a symbol of the indiscriminate redevelopment that occurred during the dictatorship years,” a time of “development that lacked a sense of history” when “Seoul rapidly became a metropolis with no character.” The complex’s worsening reputation brought about discussions of redevelopment, that all-purpose solution to Seoul’s every perceived urban problem, and when higher-ups in Korea talk about redevelopment, they usually mean demolition and total replacement. 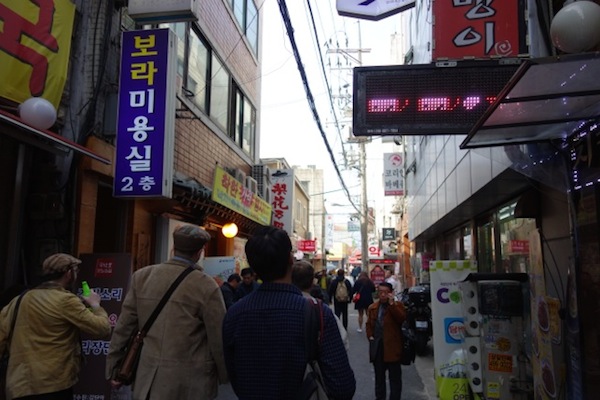 But somewhere amid the years and years of discussion the nuclear option fell off the table, and now talk has circled around going with the strategy, tested in other world cities, of converting this large complex (which a friend compared to a mega-skyscraper laid on its side) into an “art center.” Some of the chances in that direction have already happened: we walked past a series of old turntables, amplifiers, and radios, the kind of things you’d have come to buy forty years ago, into garden sculptures, and the shutters of most of the upper-floor shops were covered with fresh-painted whimsy. A new wave of businesses, including a bookstore, had just begun to move in, but almost everything else surrounding us came from a more industrial past: small repair specialists, parts dealers, machine shops — Pietà country.

Fouser took us to locations from other films as well, through a former (and still, in part, current) movie theater district used back in 1997 in The Contact (접속) and ending up at the tea shop which, a dozen years later, played the title role in the Japanese-Korean co-production Café Seoul (카페 서울/カフェ・ソウル). It stood in Ikseon-dong (익선동), a neighborhood built as an all-hanok development in the 1930s which itself once faced the threat of demolition. But now, with busy hands of the redevelopers stayed, the area has undergone some of a process that, in America, we might — or rather, we often — call gentrification: hip new eateries have appeared, as have hip new vintage stores, as have the hip new young people to be seen in them. But the discussions about gentrification don’t sound the same in Seoul as they do in Los Angeles. Here they seem wholly economic in content, whereas in America they inevitably swerve toward class or race issues.

Korea, an ethnically non-diverse society whose class system essentially pushed the reset button after the war, hasn’t really produced the body of sociologists needed to study this sort of thing in the same way it gets studied in America. But nor has the country’s study of its own history gone without complications; different people have different answers to the question of what counts as properly historical, especially in the realm of architecture. Fouser, a self-described “hanok maniac,” pointed out some of Ikseon-dong’s especially bothersome abuses of the form, such as the insertion of picture windows into private homes or the cutting away of entire walls of cafés — the better, presumably, for the rest of the neighborhood to hear the pop songs it cranks up into the night.

At least they’ll bother you if you place a high value on authenticity, and want a time-tested street-scape to look and feel the way it’s always looked and felt. I imagine that can be an exhausting sensibility to possess in Seoul, a city still working out its relationship to its history with an almost metabolic tendency toward disintegration and reformation. As always with these RAS excursions, I enjoyed the conversation that happened afterward as much as the event itself, and there at the tea house we talked about not just why we like Seoul, but how even to describe the city to someone who’s never experienced it. Yes, it lacks the kind of cultural weight Tokyo has; yes, it has little in the way of architectural distinction; yes, it’s only come around to an appreciation of history after losing most of it and realizing that developed countries tend to have old things; and yes, it can feel like a jumble where nothing has anything to do with anything else. But in the jumble, so we could all agree, lies the fascination. 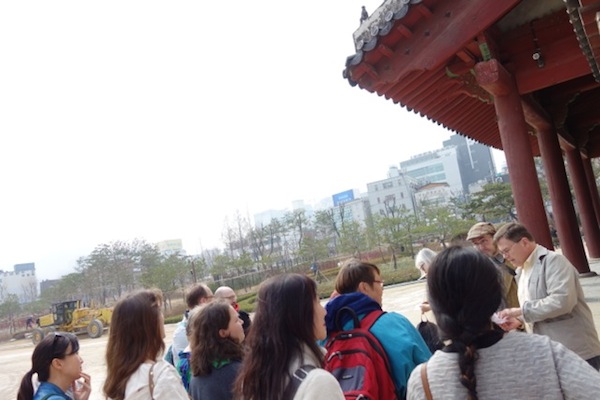