The first piece of writing I ever read on Korea had to have been P.J. O’Rourke’s “Seoul Brothers,” originally published in Rolling Stone in 1988. O’Rourke, whose work in many ways inspired me to get into writing myself, back then had the beat of the troubled parts of the world; I first read this particular article in a collection called Holidays in Hell. It opens as follows: “When the kid in the front row at the rally bit off the tip of his little finger and wrote KIM DAE JUNG in blood on his fancy white ski jacket — I think that was the first time I ever really felt like a foreign correspondent. I mean, here was something really fucking foreign.”

O’Rourke had come to Korea to cover the turmoil around the country’s first free direct presidential election. A Korean friend of mine, an economist as well as a fan The Economist, remembers opening up that magazine some time ago and reading an article which began with words like, “South Korea, which became a democracy in 1987…” — words which startled her. She on one level knew, of course, that her homeland held its first genuinely democratic (or close-enough) elections in that relatively recent-sounding year, but it’s one thing to know it, and quite another to have it plainly stated back at you as an acknowledged fact by a respected international news outlet. 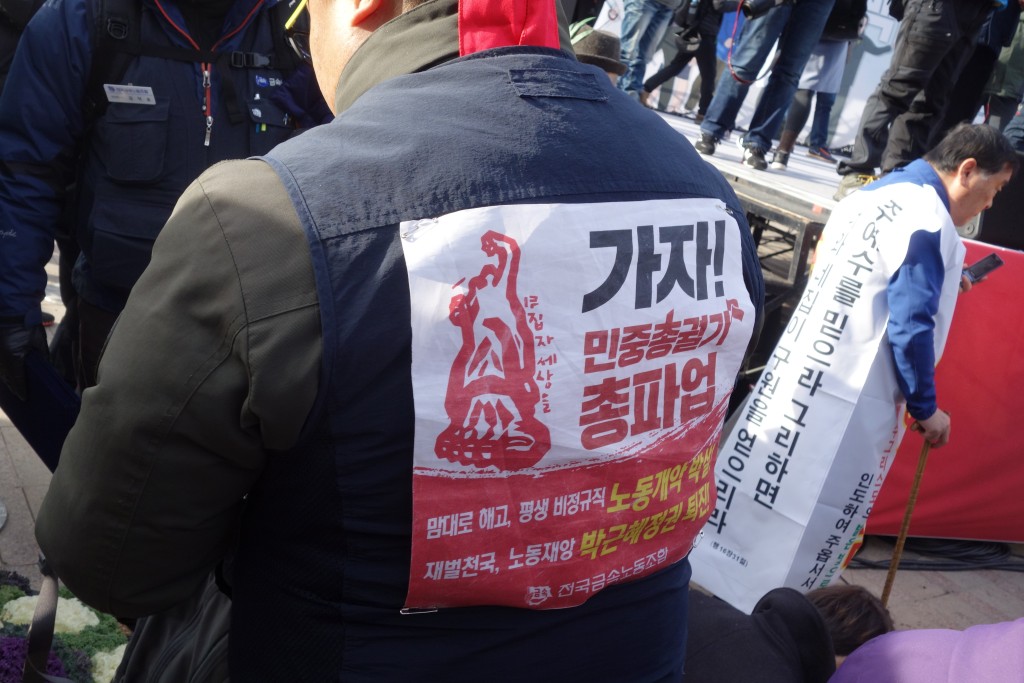 History remembers Kim Dae-jung as an icon of Korean democracy, but despite having proven inspirational enough in December of 1987 to get his supporters writing his name in their own blood, he wouldn’t win the presidency until 1998. He ran against the late Kim Young-sam, who would serve as President first, from 1993 to 1998, and they both lost to Roh Tae-woo, President from 1988 to 1993, though rumors of vote fraud swirled around his victory fast enough that O’Rourke had the opportunity to don a helmet against the hail of thrown stones and a ventilator mask against the tear gas (which seems to have constituted a basic element of Seoul’s atmosphere in the 1980s) and make his way into a ward office occupied by enraged student radicals and under siege by the police.

I experienced nothing so harrowing at Seoul’s latest round of protests, almost three decades later in front of City Hall this past Saturday. Korea’s street fighting years have gone, but — in keeping with the retromania that has lately swept Korean popular culture, culminating in a hugely popular TV drama set in 1988 — their spirit made a bit of a comeback last month, when a November 14th demonstration attended by between 68,000 and 130,000 turned into a melee between protesters and police, the latter armed with pepper spray-infused water cannons. The grievances of the former, a variety of which tend to accrete together to fuel these protests, included the potential abuse of labor reforms meant to allow companies to hire on shorter-term employment contracts, manhandling of history by new government-issued school textbooks, and harm to Korean farmers from a free trade agreement with China. 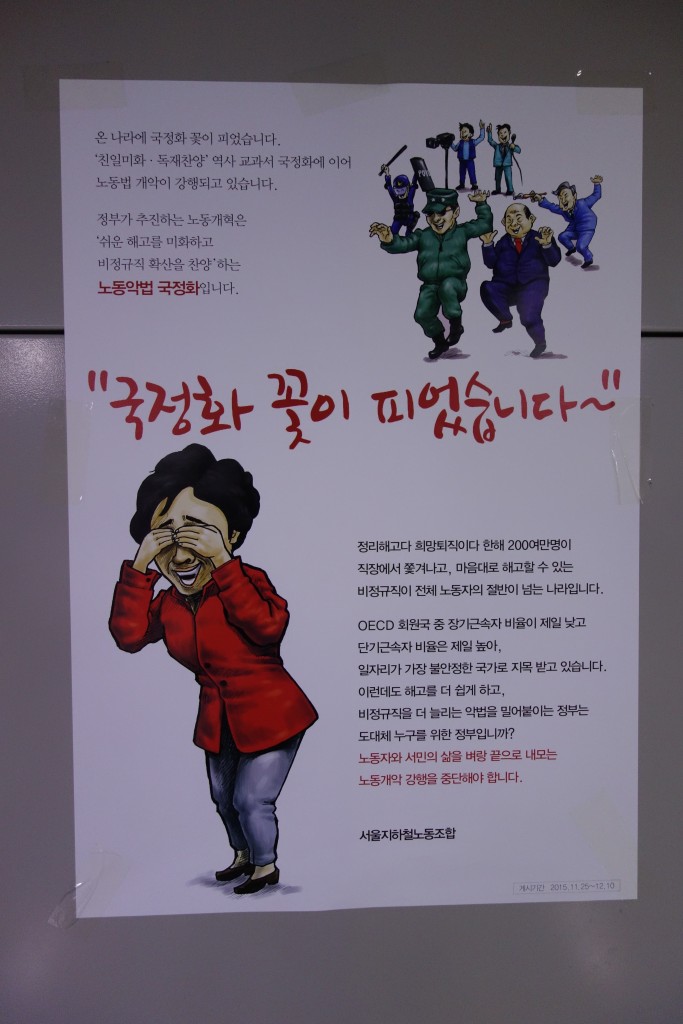 When I turned up at Seoul Plaza around 1:00 in the afternoon, I found little going on but a group of identically-dressed protesters practicing their choreographed routine — literally a song and dance, a form Korean protesters have long used to get their points across — before a sparse crowd. But when I came back about an hour later, that sparse crowd had become a nearly impassable throng, many of its constituents wearing color-coded dress or holding aloft flags in representation of their cause. This being Korea, a number of street-food vendors had also set up shop to feed the crowd on the chilly day with grilled chicken skewers, speared fish cake, and steaming pots of beondegi, the boiled silkworm larvae so popular as pub cuisine.

More video screens had gone up since last I’d checked, and the cameras that fed them swooped over the crowd (of 14,000, says the police estimate) looking down onto a sea of white masks. Those masks, which anyone could pick up from distributors handing them out around the plaza, had appeared as a result of the November 14th protests, or rather, in response to President Park Geun-hye’s response to the November 14th protests. Park brought down an official ban on masked protests because, in her words, “Isn’t that how the Islamic State does things now, hiding their faces?” — thereby giving her detractors a both easy and media-friendly way to show their defiance. 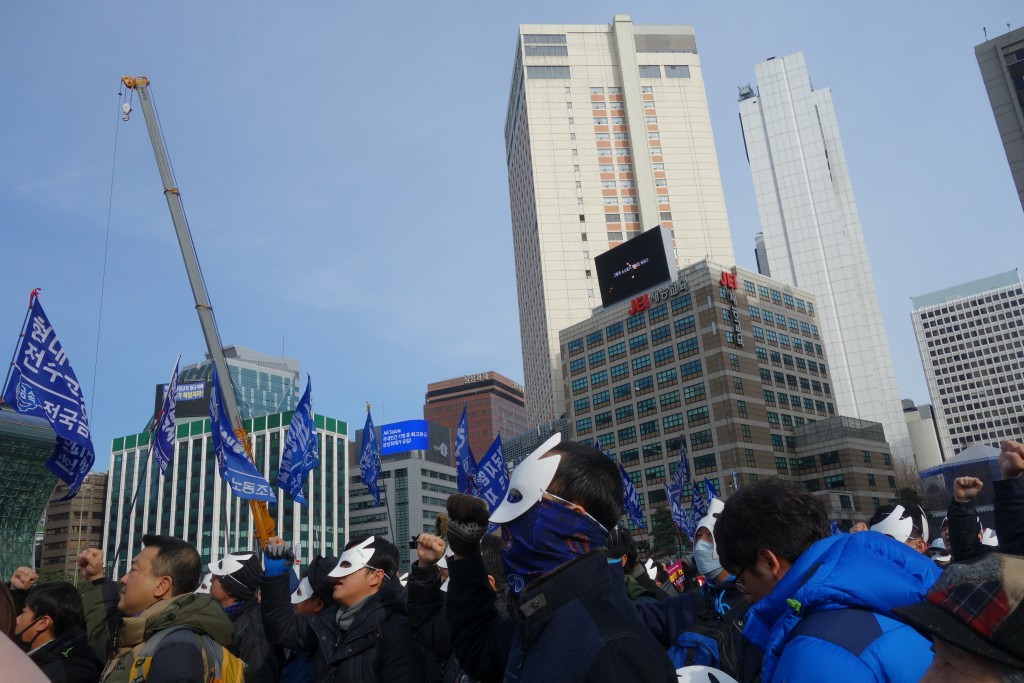 Though he couldn’t understand the language, O’Rourke captured the tone of a politically charged Korean gathering neatly: “Korean sounds like ack-ack fire,” he writes, “every syllable has a primary accent.” Indeed, in official or otherwise serious contexts, even civilians in Korea tend to speak with a militaristic sir-yes-sir cadence. And if the speaker pauses, “the crowd responds in unison with a rhymed slogan or with a precise fifteen seconds of waving little paper Korean flags. There’s no frenzy in this, no mob hysteria, and it’s not a drill or an exercise. I’d never seen spontaneous regimentation before.”

This rally featured speaker after speaker, each performing with a display of high if nevertheless controlled emotion. They often spoke Park’s name, usually in calls for her resignation, or at least for an apology for her increasingly heavy-handed use of power. In the weeks before the protest, posters critical of the President appeared in subway stations throughout Seoul, and those doing the criticizing imply and sometimes even claim outright that her ruling style has come to resemble that of her dictator father Park Chung-hee, under whom Korea industrialized in the 1960s and 70s, the period of which opponents of the new history textbooks fear a “whitewashing.” Her supporters, many of whom remember the country’s rapid development under Park Chung-hee (I have yet to meet an avowed Park Geun-hye fan under fifty), might well consider that a fine thing. 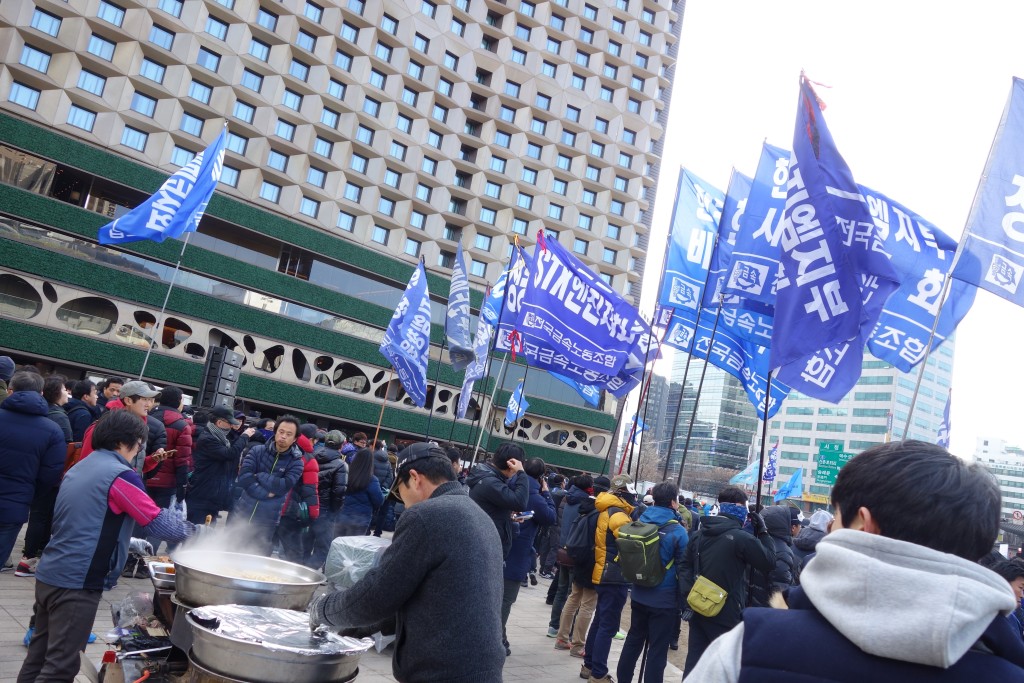 To the extent that the older generations approve of Park Geun-hye and admire her father for having run a tight ship, they also regard protesters like Saturday’s as a nuisance. They might have applauded the police ban on their activity, ostensibly for the sake of public safety, and regretted when the Seoul Administrative Court overturned it as an infringement of their right to assemble. But the very notion of a ban on a protest might strike American ears as something of a contradiction: surely if a government lacks the right to ban anything, it lacks the right to ban a protest.

But as that Economist article reminded my economist friend, democracy and the attitude toward the law (of those subject to it as well as those who make it) on which an American might expect democracy to be based hasn’t had time to take deep root in Korea. A protester now might feel entirely justified in fearing a short slide back into dictatorship, especially given the thin ideological convictions on which democracy came in the first place. “What’s this election all about?” O’Rourke asked voters in 1987. “Democracy,” they answered. “But what is democracy?” he asked. “Good,” they answered. “Yes, of course,” he said, “but why exactly?” “Is more democratic that way!” 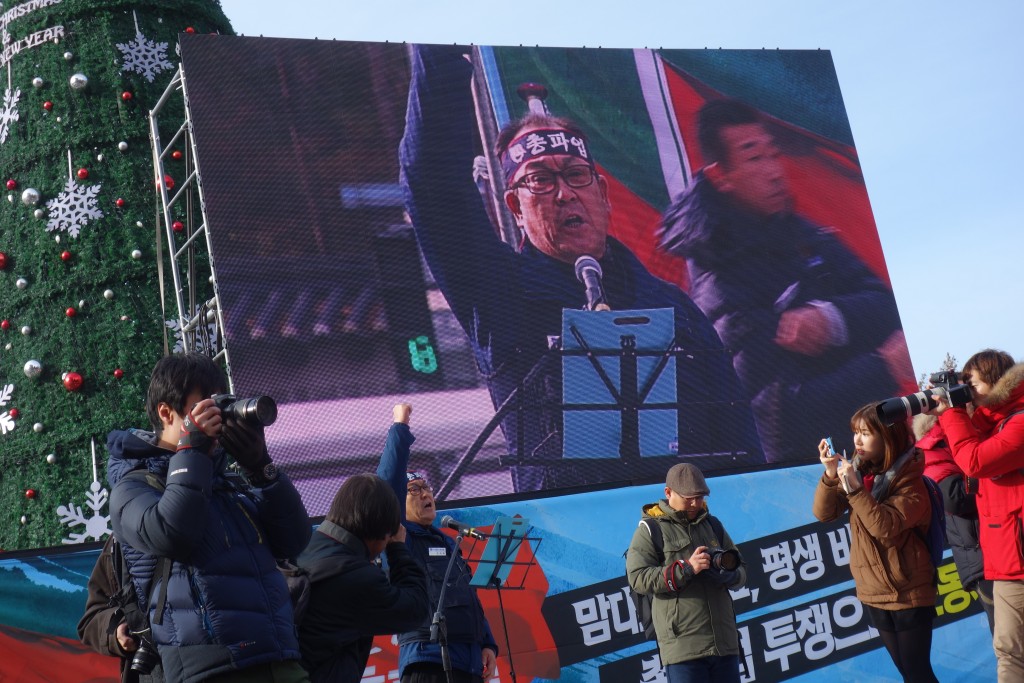 Much on Korea’s surface has changed since the 80s, but some deeper qualities haven’t, least of all the assumptions underlying protests like this month’s or last’s. Michael Breen told the story well in his book The Koreans: “In the first half of the twentieth century, the Japanese used modern law to invalidate Korean practice, destroy Korean culture, and cheat locals out of their land. Under Park Chung-hee, the government directed modernization through laws. These laws are written in a vague way that allows government bureaucrats great leeway in interpretation. Thus, Koreans have always seen law as something given from above. The concept that law is created after debate by people who are elected, and that in theory they, the ordinary people, have a say in the development of the laws of the land, does not yet figure into the common perception.”

Longtime Korea-watchers tend to view the country not as a system of laws but of social relations, a framework which makes it easier to understand an environment where, as Breen puts it, the opposition will “simply oppose and hinder government in whatever way it can, without bothering to develop rational argument,” where parties form and dissolve as nothing more than “a gesture to democracy in an authoritarian political culture.” Democracy for Koreans, as much now as when the last edition of The Koreans came out in 2004, “means they can elect their leader and hold him accountable. But they still do not see their political leaders as their representatives. There is still a view that leaders are wrong, corrupt and working against the interests of the people.” I might add that, even though I didn’t dodge any rocks or breathe any tear gas this time around, that mistrust still goes both ways. 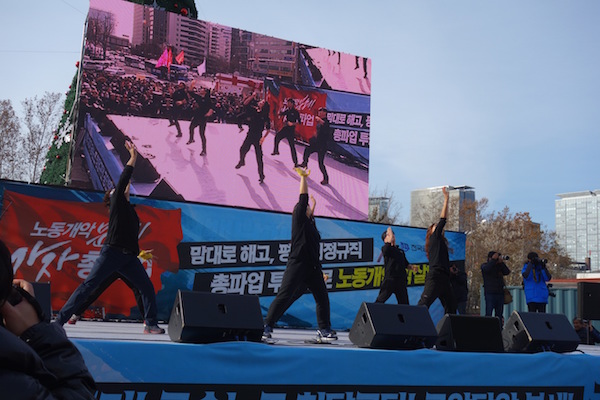