“Tayo the Little Bus is a steaming pile of garbage,” a friend of mine recently posted to Facebook. If you don’t like that show in America, I told him, try not to move to Korea, the land where Tayo comes from. I only understood his reference because I did move to Korea — and moreover to Seoul, where Tayo imagery abounds — but my friend, the father of a two-year-old, has had the phenomenon inflicted much more directly upon him. Like any production geared toward toddlers, I imagine its inherent repetitiveness, combined with the average little kid’s immunity to watching the exact same thing over and over again, soon pushes any grown-up of sound mind halfway to the asylum.

On its face, the concept of a computer-animated cartoon about a bus and his friends, mostly also buses, makes sense, especially one aimed at very young boys going through their phase (or, as the case may be, lifetime) of obsession with all things mechanical and in motion; the Thomas the Tank Engine and Cars franchises have certainly done well for themselves by tapping into that same vein. But my friend’s central objection turned out to have less to do with the show’s concept that with its English-language dubbing, specifically the teeth-achingly enthusiastic performance of the lady who plays Tayo himself.

Frankly, it surprises me that Tayo the Little Bus (꼬마버스 타요) exists in English at all. Cars tend to dominate American landscapes as well as lives, and trains, however deeply passenger rail sinks into the realm of low-budget antiquarianism, have held their place in the American imagination. But the very mention of buses, for most of my countrymen, seems only to conjure up images of uncleanliness, inconvenience, and poverty. Speed, the pinnacle of Los Angeles action cinema, struggled to get made due to its script “about a bus.” The situation has improved in recent years thanks to the revival of downtowns across the country (Los Angeles’ own being the most dramatic), but only by degrees.

Two-year-olds, though, have yet to internalize the anti-bus prejudice entrenched in America and other parts of the West (much less to perpetuate the feedback loop of low expectations that cause inadequate bus service in the first place, which then lowers expectations further, leading to even worse service), and so Tayo and friends have built up a fan following here and there all over the world. But the show remains essentially a Korean product, and one conceived, with the help of previous Seoul mayor Oh Se-hoon’s office, as a way of familiarizing the children of South Korea with this tried-and-true form of public transportation. 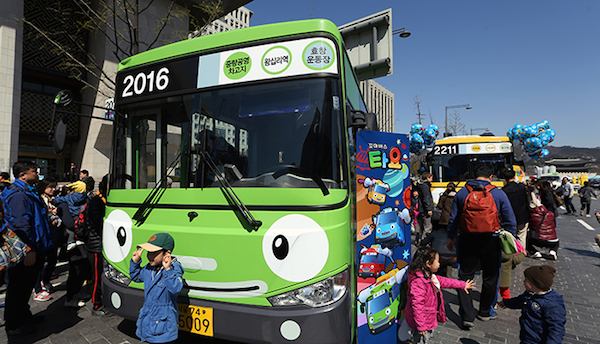 But Tayo (whose name means, literally, “ride”) has, since he debuted in 2010 on EBS (they of Multicultural Love), has gained the most traction, as it were, in his home country. All his adventures take place on backdrops of generic Korean urban streetscapes punctuated by such highly recognizable Seoul landmarks as the Han River, Seoul Tower, and City Hall. It reminds me of the structure of Grand Theft Auto V‘s Los Santos, described by Sam Sweet as “an extremely realistic version of a Los Angeles that doesn’t actually exist,” a virtual city whose map “is familiar but its contents are condensed. The landmarks are exact but the placement is screwy.”

In 2014, the city even rolled out actual buses decorated to resemble Tayo and his compatriots (not so difficult a task, given that the designers of Tayo and his pals modeled them closely on Seoul buses in the first place). 40,000 people turned up from all over the country to take part in the event that introduced them, a day including activities meant to teach youngsters how to board a bus, pay their fare with a transit card, and press the stop-request button. Best of all, in the memorable words of Korea.net, “the children were able to get on the bus and sit in its seats, curious to see the inside of their favorite cartoon characters.”

Nikola Medimorec, at his Korean urban-development blog Kojects, foresees that, thanks to this sort of thing, “children will grow up with the impression that buses are fun. Moreover, I believe that it also has an effect on the parents. It’s probably small but I hope that if they take their child on a bus, they will see that it isn’t that bad to use public transport WITH their child,” instead of using parenthood as an excuse to start driving, standard operating procedure among even my most die-hard urbanist acquaintances in Los Angeles.

Still, I can’t imagine anyone spending even just a few days in Seoul and coming away with the impression that its population suffers from an insufficient awareness of or willingness to use public transportation. Seoul has far and away the finest subway I’ve ever used, but even then one of the city’s countless bus routes can get me to my specific destination often more comfortably and sometimes more quickly than a train. If any urban transit system can sell itself without the benefit of smiling anthropomorphism, Seoul’s can. Very few of the bus-riders here — normal people, not looking homeless or deranged or violent or any more downtrodden than the average Seoulite — started using them because a cartoon character made it seem like a good idea.

And what of the City of Angels? “I thought about the bus in Los Angeles,” says Richard, the non-driving narrator of Richard Rayner’s novel Los Angeles Without a Map. “It was the way to travel. Once I had waited for over two hours at the corner of Sunset and Crescent Heights Boulevard when a driver with a cowboy hat and and a drawling voice like Harrison Ford decided he was sick of his job. His solution to the problem was to stop the bus and make everyone get off.” Richard goes on to tell us of enraged aisle-prowlers, robberies by prepubescent thugs, and passing motorists shouting “Lo-sers, asshole losers!” His blonde über-Angeleno girlfriend asks if he really likes riding the bus. “It’s democratic,” he replies. She snorts, asking whether democracy arrives on time. “’Never had to wait more than five minutes,’ I lied.” 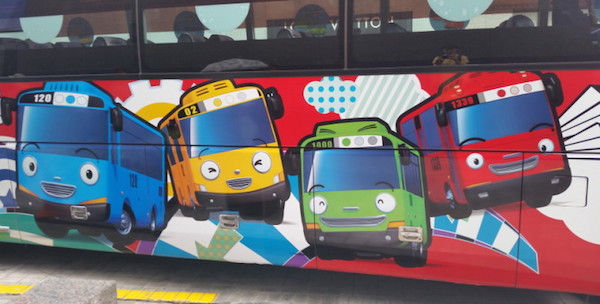 But that book, though as perceptive and hilarious a read as ever, came out in the late 1980s, a time when Los Angeles had no rapid transit infrastructure to speak of. “It was weird not to drive, it really was,” recalled Rayner, still unburdened by a driver’s license, when I interviewed him for a LARB podcast, “because a lot of the city was still quite empty. I was friendly with this family, and the father was a lawyer in Warren Christopher’s firm downtown. I was taking to one of the daughters, and she said, ‘Well, how do you get around?’ I said, ‘I take the bus.’ And she looked at me and said, not in any sense of irony, ‘Where do they go?’”

I sometimes wonder if Los Angeles, now that it boasts a quite usable and still-growing rail network and the status, in many ways,  of America’s transit city to watch, has achieved much more transit awareness than it had back then. When I tell people here where I moved from, they often ask if Los Angeles has a subway (one of them, a New Yorker, also asked if it has skyscrapers), and some Angelenos themselves, especially those who’ve lived there a long time, regard the existence of trains and buses in the city, let alone their viability, as more rumor than reality. Perhaps Los Angeles needs Tayo more than anywhere — or better yet, a Tayo set in a familiar environment, something like Los Santos without the rampages.

During my day-to-day life in Seoul, I still spot the faces of Tayo, Rogi, Lani, and Gani now and again, and I have only to look out my window to see a stream of similarly blue, yellow, green, and red buses flowing all day long through their dedicated lanes, running in the opposite direction to the rest of the traffic. A few months before moving here, I went to an event with New York transportation guru Janette Sadik-Khan and Los Angeles Department of Transportation general manager Seleta Reynolds. Having taken the “Rapid” 720 bus there (the ones that goes down Wilshire), I asked during the Q&A when Los Angeles, too, will finally get actual rapid buses, rather than buses for which traffic lights kind of stay green and which sometimes have their own lane during certain hours of the day unless cars also really need to go in them.

Reynolds, to her credit, acknowledged the problems, then said getting respectable rapid bus service there would require “a lot of storytelling.” I found the response frustratingly mystifying at the time — what, now we have to spin tales in exchange for basic infrastructure? — but maybe Tayo the Little Bus represents the kind of storytelling she meant. If so, Los Angeles had better start doing it soon; I when I checked back in with my friend, he reported that his young son was, already, “thankfully off his Tayo kick.” 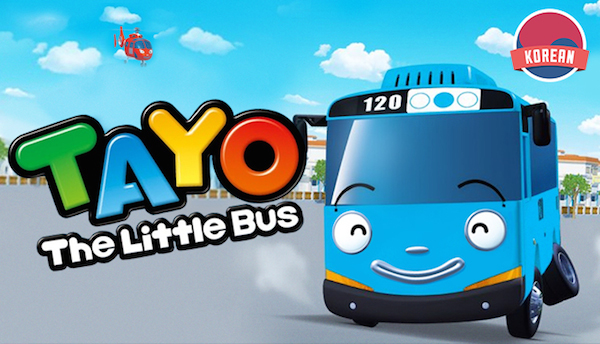