I, like anyone else who has lived in Los Angeles, hesitated to leave the city for one reason above all others: where would I get decent Mexican food? This might sound like a trivial concern, and one already addressed by Our Globalized Century, but an Angeleno needs not go far out of town any direction but south to realize just how good he has it. Seeing the world teaches us lessons we couldn’t learn any other way, and each new country I experience teaches me one in particular, more powerfully every time: Mexican food doesn’t travel.

The fact that while living in Los Angeles I forgot about the very existence of hard-shell tacos (a southern Californian invention, ironically) says all you need to know about the glories of eating Mexican there. Or rather, I’d forgotten until I went to Copenhagen and ordered, at typically great expense, one of their interpretations of that signature south-of-the-border street food. Out came a hard shell, of course — for what other kind of taco shell could there be? — made to shatter into a dozen pieces at the first bite, filled with watery ground beef smothered in mounds of sour cream topped with stiff orange shredded cheese: a culinary vision straight out of my elementary school days, but reincarnated in such comically huge proportions that it actually required the use of the knife and fork provided.

And so I made my peace with a lack of proper Mexican food in Korea even before I first came to visit. Still, that didn’t stop me from joining in on a trip to a local place called Dos Tacos right away, where, having learned my lesson back in Denmark, I ordered not dos tacos (or even un taco), but opted instead for — and I still don’t know if I made the selection in the spirit of curiosity, self-flagellation, or both — something called a 나초피에스타, or “nacho fiesta,” about which the less said the better, suffice it to say that its warmed Cheez Whiz sent me right back down the terrible Proustian path to the fourth grade.

But who in their right mind comes to a place like Korea, with its own robustly developed (and, to my palate, almost unfailingly delicious) culinary traditions, looking for Mexican food? For a long time nobody did, until Westerners started coming in force (meaning coming to constitute the small non-Chinese part of South Korea’s two-percent foreign population) and bringing their longings with them. This holds especially true for my fellow Americans: the military-affiliated ones have long satisfied their various cravings on or near the base, but the growing number of young English teachers have increasingly arrived expecting to find the same things they enjoyed at home just as available here. 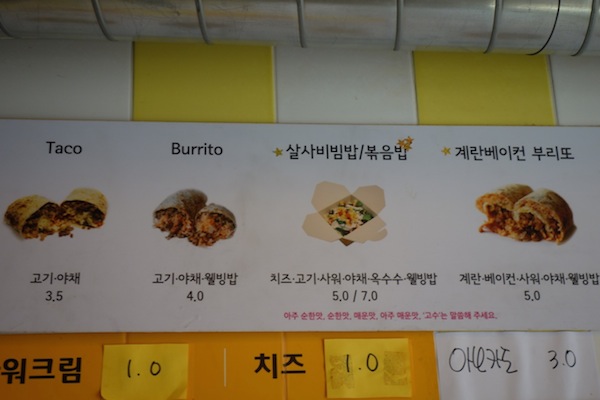 For most of them, though, “home” isn’t Los Angeles; it’s Seattle or Denver or Milwaukee or Boston, or more likely their suburbs, places where the Taco Bell-Taco Time axis of evil or the sort of restaurants to which you go for Chimichanga Plate #2 and a giant margarita set a sad standard. And so Korea has, for the most part, adopted that bland tradition, and sometimes gone all in for it. Not only do they have Taco Bell and clones of Taco Bell here, they have “Mexican week” at their Outback Steakhouses, a cultural-commercial intersection that sends the mind reeling.

Korea — or let’s say Seoul, which gets everything first anyway — began with no Mexican food, graduated to unappealing Mexican food, and has now reached the stage where, though you still can’t and probably never will be able to reliably enjoy a meal standing at a randomly selected lonchería, boasts a fair few spots offering reasonably good meals that do indeed bear some resemblance to Mexican food. But I wonder: why hasn’t Mexican caught on more in Korea than other genres of foreign food? Given its easy street edibility, its tendency toward spiciness, and its utter dependency on meat and other animal products, you’d think it would be right up the Koreans’ alley.

But it turns out that a lot of them hate cilantro. I realized this the third or fourth time a waiter or cashier taking my order at a Korean Mexican place asked me whether I wanted it included in my food, a question that at first I no more expected to hear than the question of whether I wanted cumin. But clearly they’ve had complaints before. Ask around, and you find that a surprising number of Koreans share a revulsion for this herb so essential to Mexican food’s appeal, usually described in the same terms: “It tastes like soap.”

While part of me believes that Mexican food without cilantro doesn’t count as Mexican food at all, another part believes that few worse fates can befall a cuisine than to receive the protection of the authenticity police. (How often, nowadays, do you go out for a memorable French meal?) And so the space for not a watered-down but a genuinely Koreanized Mexican cuisine still looks promising to me; Angelenos familiar with Roy Choi’s Kogi trucks (as if any other kind of Angeleno exists) know just how well it can work from the other direction. 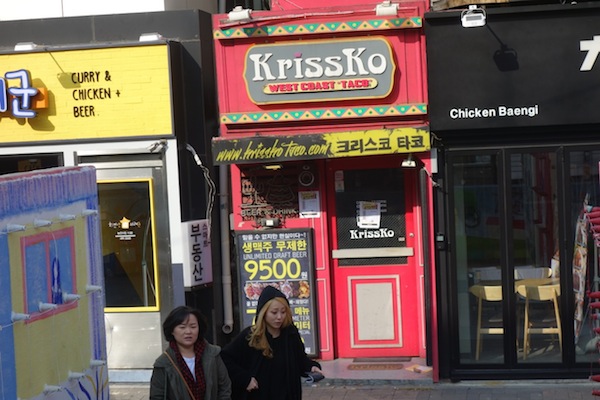 I recently tried a bit of that at a one-man shop called Habanero (하바네로), from whose one man I ordered a squid burrito. He asked the usual question about whether I wanted cilantro, and when I said I did, he put plenty in. He asked the other usual question about whether I wanted it spicy — the usual question for foreigners, anyway, though still an odd thing to have to ask given his eatery’s very name — and when I said I wanted it very spicy, he made it so, not quite in the Mexican manner, nor quite in the Korean one, but somewhere interestingly in-between.

Still, nobody, to my knowledge, has yet offered explicitly Koreanized Mexican food here, I suspect because not every sort of Korean business here yet sees its Koreanness as an advantage. It reminds me of what happened when the Eiffel Tower-logo’d Paris Baguette, a Korean-owned bakery-cafe chain omnipresent on the streets of Seoul, made their move into Paris itself. A public relations firm suggested that the store set itself apart with promotion as the only Korean bakery in all of the City of Light, an idea which Paris Baguette’s higher-ups regarded as anathema. They’d have done anything but come off as Korean, and so they de-Koreanized their flagship Paris branch further still, disappointing the Paris-resident Koreans and formerly Korea-resident Parisians who’d come for Paris Baguette’s signature hypersucrotic pastries and sausage-stuffed cheese rolls.

In the case of Korea’s best-known purveyors Mexican food, most of it seems as much an adaptation of American Mexican as Mexican Mexican. That, alas, has happened to many foreign cuisines here, since the United States has loomed so large in Korea’s view of the world outside Asia for so many years. So far, most of the enjoyable Mexican meals I’ve eaten in Seoul have clearly come inspired not by something you’d eat, say, outside the Cuauhtémoc station in Mexico City, but by something you’d eat in California or Texas. One spot not far from Habanero that I haven’t yet worked up the will to enter advertises, in English, “WEST COAST ‘TACO’” — scare quotes theirs. 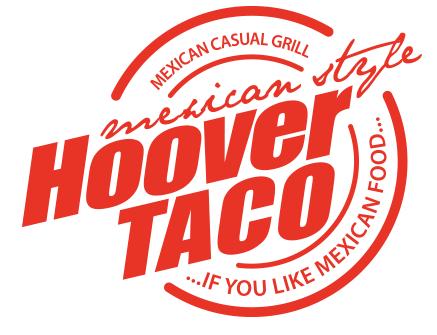 Life in Los Angeles did give me the sense, though, that not every Korean who goes to America returns with all the wrong ideas about Mexican food reinforced. (One Korean friend, now a five-year resident of Los Angeles, cringes with embarrassment at the memory of a “Mexican” dinner she once had with her high school pals back in Seoul, all thinking themselves the height of sophistication as they dropped ridiculous amounts of money on sodden enchiladas and tortilla chips.) Most of the Koreans I met there seemed to if not frequent then at least have some experience eating at El Taurino, the big all-night taco joint a few miles up Hoover Street from USC. This struck me as coincidental enough, but they also all called it by the same name: not El Taurino, but 후버타코, or hoobeo tako — “Hoover Taco.” Don’t ask me what the deal is with the nickname; El Taurino renders much more easily in the Korean language (엘 타우리노) than most foreign words.

This Korean blog post about the writer’s trip to El Taurino first deals with what he describes as the perennial complaint of its Korean customers: that the orders seem to come out of a random window at a random time, or more suspiciously, that the workers and the Spanish-speaking customers talk in whispers to one another, no doubt to conspiring to ensure that their own people’s food gets prepared  first. The author of the post ascribes this seeming favoritism to nothing more than the freewheeling nature of the Mexican culture: “They don’t have any workers as fast and precise as Koreans. Asking a Mexican to work the same way would be fascistic.”

And so, on Garosu-gil, one of the most fashionable streets in Seoul, appeared a familiarly named restaurant perhaps meant give the El Taurino concept, loosely interpreted, a dose of good old Korean food-service fascism. Its name: Hoover Taco. Branded as both “Mexican style” and a “Mexican casual grill” (and a place to go “If You Like Mexican Food…”), this slick, candle-on-every-table sort of place without a Virgin of Guadalupe in sight arguably failed to grasp the appeal of its sort-of namesake when it opened back in 2012. 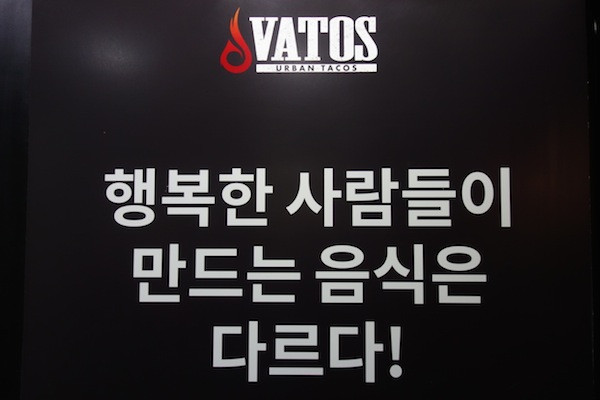 But the following year, along to Garosu-gil came Vatos (바토스), the Kickstarter-funded creation of three Korean-Americans, two from southern California and one from Texas. They’ve apparently premised their restaurants on the notion that, if you must do American Mexican, you might as well do the best American Mexican you can. (With no fascism required: according to the sign just above, “food made by happy people is different!”) Their efforts actually gave my girlfriend and I the unexpected chance, just after moving to Seoul, to try a standard Tex-Mex dish about which the Austin scenes of Richard Linklater’s Boyhood had filled us with curiosity but that we never had a chance to order in the States: the melted concoction of chili peppers and blended cheeses (real and otherwise) that Texans just call “queso.”

Beyond that, Vatos also offers a bit of Kogi-style fusion (kimchi carnitas fries have proven popular) as well as a suite of what they call “urban tacos” (reminiscent of the days when Diablo in Silver Lake earned the scorn of the world by branding itself an “Urban Taco Fabricator”) containing your choice of meat, like carne asada, carnitas, barbacoa pork, and spicy chicken, or — presumably to establish their California credentials — vegetarian and vegan fillings. But I can already sense which of my own desires will have to go unsatisfied for a longer term: where’s the buche? The lengua? The cabeza? The cachete? The sesos — what of the sesos?

And so, Mexican chefs, let me assure you that the opportunity to do what you do best remains wide open in Korea — for tacos, sure, but I can only imagine what impact a solid mole would have over here. I complained, in Los Angeles, of so many Mexican eateries’ widespread reliance on pre-made rather than fresh tortillas, but here they don’t even seem to know that you can make them out of corn yet. The law here will make you find a Korean business partner, but as soon as you do, get ready to blow some minds, not so mention some tastebuds. Just maybe go easy on the cilantro for a while. 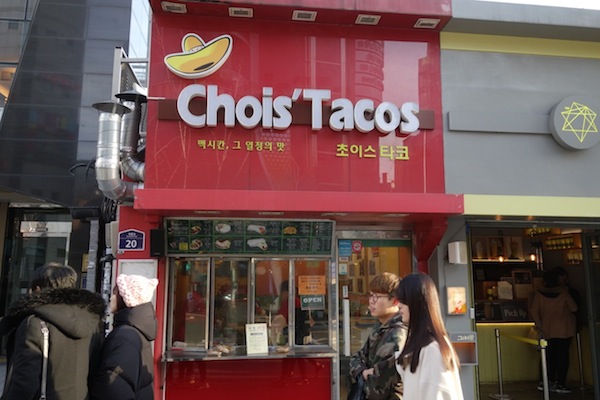