Over the past few months, a publicity blitz of the caliber usually reserved for Hollywood superhero spectacles has urged Koreans to see a I Can Speak (아이 캔 스피크), a movie about a straight-laced young civil servant who reluctantly gives English lessons to an old battleaxe. Or at least that’s how it looked at first: as more detailed press and advertisements came out, people started to sense something more complicated than the Korean Harold and Maude (if that) they might have expected. Soon word spread that it actually deals with one of the most dangerously controversial issues in the country today: the plight of the “comfort women,” the young girls forced into prostitution for the Japanese military during the Second World War.

Even typing that last sentence, especially the word “forced,” feels as if it might set off an international incident or two. On my first trip to Seoul I had several appointments that brought me the the vicinity of the city’s Japanese embassy, at that time a grim, prisonlike building, demolished in recent years after many denied requests for permission to do so. I knew a now-iconic bronze comfort woman statue (officially called the “Statue of Peace”) had been installed near it, but I somehow hadn’t imagined it sitting right across the street, its placid, accusatory stare pointing straight ahead. The Japanese government has requested the statue’s removal time and again, to no avail, since it appeared in 2011. Young volunteers watch over it 24 hours a day, and protests, often involving the surviving and now elderly comfort women themselves, have happened in front of the embassy each and every Wednesday for more than 25 years.

Other comfort woman monuments have appeared elsewhere in the world, including a lawsuit-drawing State of Peace clone in Glendale’s Central Park, and just this past summer five of them started riding Seoul city buses. While all this might make an observer unfamiliar with east Asian affairs wonder if the Imperial Japanese Army and its human trafficking operation remains a going concern, current Korean objections specifically target the official Japanese attitude toward those wartime exploits, even as the exploits themselves slip out of living memory. Japan, in this view, captured and enslaved somewhere between 20,000 and 400,000 unwilling young girls from not just Korea but China, the Philippines, the Dutch East Indies, and other territories besides, yet has consistently refused to properly apologize for or even fully acknowledge its crimes.

This perception has its challengers, not all of them Japanese. Park Yu-ha, a literature professor at Seoul’s Sejong University, just this year won an acquittal of criminal defamation charges first leveled in a civil court after nine former comfort women filed a lawsuit against her for her 2013 book Comfort Women of the Empire. “After extensive research into historical documents and transcripts of former comfort women’s testimonies, Park said she found evidence that some women worked willingly with the Japanese, and that there were Korean collaborators who worked to recruit the women,” writes Steven Borowiec at Al-Jazeera, “which meant that not all of them were mobilized by the Japanese military.” Though “Park has maintained that she does not deny that many comfort women suffered, and that some were held against their will,” the nuances of the story she tells align imperfectly with the stark “narrative of victimization” long in circulation.

Though it does eventually arrive at a scene based on the 2007 hearing United States House of Representatives House Resolution 121, a request that the Japanese government apologize to former comfort women and teach that dark chapter of its history in its schools, I Can Speak doesn’t do much direct grappling with issues of Japanese guilt or Korean complicity. Instead, it spends most of its runtime on the relationship between the thirtysomething Park Min-jae, who takes complaints at a Seoul government office, and Na Ok-bun, who shows up at that office daily with trivial offenses to report. Hoping to learn English in order to communicate with her long-lost brother, sent off to America in childhood for adoption, she overhears Min-jae speak English fluently and demands that he teach her. His co-workers, eager to have Ok-bun distracted from the aggressive complaint-filing habits for which they’ve nicknamed her “Goblin Grandma,” heartily approve of the idea.

Though Korean social custom dictates that any woman past certain age gets called “Grandma,” Ok-bun doesn’t have any grandchildren, nor any children — nor, apart from the American brother any family at all. Anyone who’s heard the film’s buzz will have imagined why: she spent the war as a comfort woman herself, an experience whose emotional and physical trauma has condemned her to the hollow existence she leads, that of a busybody seamstress in a run-down market complex. Min-jae has his own dissatisfactions with his lot in life: once an aspiring architect, he had to cut his studies short when the deaths of his parents turned him into his teenage brother’s guardian. Ok-bun embodies not just the struggle of the comfort women but the lonely, precarious state of a surprising number of South Korea’s elderly; Min-jae embodies that of a younger generation’s stifled ambitions.

The film also finds its way to other themes of life in 21st-century South Korea, like the displacing and sometimes violent churn of urban development (Min-jae at one point uses his bureaucratic power to defeat a thug hired to intimidate the residents of the market into vacating) and, more obviously, the societal pressure to learn English. On that level the movie has a precedent in Kim Sung-su’s Please Teach Me English (영어완전정복), which also deals with the Korean struggle with that language and feaures a government-worker main character. Having come out in 2003, it exemplifies that era’s trend of slapstick-laced goofball comedies, whereas I Can Speak exemplifies the current trend of ostensibly lighthearted stories that swerve toward an actual Korean tragedies. Last year’s Robot Sound (로봇 소리), on its surface about a man who befriends a robot but actually about the country’s deadliest subway disaster.

So, less startlingly, does this year’s A Taxi Driver (택시 운전사), whose smiling title character drives a journalist straight into the 1980 Gwangju massacre. Both it and I Can Speak reflect the Korean assumption that English is the language to use not just to resolve global issues, but regional and even local ones. Though technically a German, the taxi driver’s passenger speaks only English in the movie, and Ok-bun ultimately uses her newly acquired English skills not just to talk to her brother in “L.A.” (which she never does learn is the same place as Los Angeles) but to testify in Washington, D.C. at the HR 121 hearings. Naturally, the movie has her do so before a cast of skeptical, buffoonish Americans and sneering Japanese, the latter of whom confront her afterward only to receive a tongue-lashing in their own language; Ok-bun, like most Koreans raised in the colonial period, would have grown up speaking Japanese outside the home, and ever since harbored a rage at her country’s colonizers primed to explode at any moment.

Or at least she would have according to the modern popular conception of Koreans under Japanese colonial rule, a people composed of a few sniveling collaborators and a great many furious patriots. That might be true in a broad sense, but any chapter of history, studied straightforwardly and in depth, presents certain complications, complications that not everyone in modern Korea wants to hear about. In the case of an issue like the one I Can Speak deals with, the complications continue to this day: Ok-bun, speaking in English, insists that she and her fellow former comfort women ask nothing of Japan but a “sincere apology,” a phrase that reveals the chasm between the two cultures of these neighboring countries.

In Japan, where sincerity consists in adherence to form, most recently an official apology and a payment of $8.3 million USD in 2015, people might well wonder in frustration what more the Koreans could want. It’s a trickier matter in Korea, where anyone, of any nationality, could always stand accused of not displaying their sincerity sincerely enough. (Every Korean I’ve talked to who’s spent time living or studying in Japan eventually comes to a variation on the same basic complaint: “I couldn’t understand their feelings.”) Few could level the charge at I Can Speak, with its numerous scenes of characters weeping at one another, although it no doubt possesses more subtlety than last year’s comfort-woman period piece Spirits’ Homecoming (귀향), which came out accompanied by a countrywide pro-hugging campaign.

Just as the Korea’s penchant for melodrama often puts off foreign viewers, especially in the West, so its characteristic vehemence about injustice has often had the counterintuitive effect of clouding even basically clear moral or legal issues for foreign observers, ultimately seeming to render them untouchable. I Can Speak has come out just in time for the week-long Chuseok holiday, and a great many Korean viewers have already followed the advertisements’ orders to get families to the theater. Though very much a Korea-targeted movie, its comedic elements may actually make its cri de coeur more palatable, or at least more understandable, to audiences in other countries (if not Japan). Does this mean the opportunity has finally arrived for some daring Korean filmmaker to make a comedy about Dokdo? 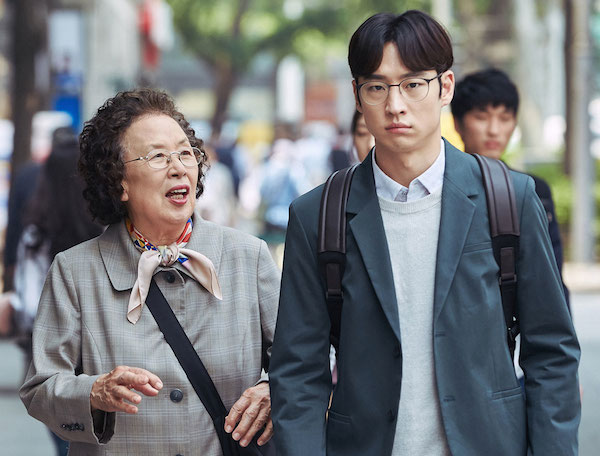