A few months ago, a somehow youthfully hardened face familiar to Westerners started to pop up in advertisements all over Seoul: that of Gordon Ramsay, the British Michelin-starred celebrity chef known for television shows in which he profanely and remorselessly shouts down culinary incompetence in his own restaurants and elsewhere. His sudden prevalence in Korea comes as less of a surprise than the product it promotes: Cass, the flagship beer of Oriental Brewery (OB), one of the few domestic mega-producers who dominated the South Korean beer market for decades and decades effectively without competition — and thus an unexpected object of favor from such an aggressive enemy of complacency in matters of food and drink.

Not that long ago, anybody in Korea who didn’t want to drink Cass could choose only from Hite, Max, or whatever else the conglomerate-owned breweries felt like bringing to market, for all of which even the most nationalistic Korean drinker could only summon one credible defense: that they do the job just fine after a few rounds of powerfully spiced food accompanied by soju, when even good beers won’t have much flavor. This dire situation only began to change about five years ago, when then-Economist correspondent Daniel Tudor took the heavily regulated local brewing industry to task with an article headlined “Fiery Food, Boring Beer.”

In it Tudor, who has since published the popular book Korea: The Impossible Country and opened a chain of pizza pubs, wrote that “South Korean diners would not tolerate bland kimchi (cabbage pickled in garlic and chili) or sannakji (fresh chopped octopus, still wriggling on the plate), so why do they swill boring beer?” He also dared to venture that “brewing remains just about the only useful activity at which North Korea beats the South. The North’s Taedonggang Beer, made with equipment imported from Britain, tastes surprisingly good.” In recent years, changes in the relevant laws have liberalized the market for imported and domestic craft beers, creating the conditions for a challenge that Korea’s hulking legacy brewers would sooner or later have to come up with a way to counter.

Ramsay, who became Cass’ brand spokesman this past September, made a trip to Seoul in last month to shoot an episode of Please Take Care of My Refrigerator (냉장고를 부탁해), a show where chefs compete to make the best meal out of the food items ostensibly found in a celebrity’s not particularly well-stocked fridge. (Despite a rocky start, Ramsay ultimately defeated his Korean opponent.) He also did a few Cass commercials while he was at it, and in one of them he points to three dishes laid before him in a restaurant, “sweet,” “spicy,” and “super hot,” describing it as “very rare that three different types can blend with a fresh beer.” For Cass in particular he upgrades the praise, proclaiming it not just fresh but “bloody fresh.” “Social media users duly sharpened their knives,” reports the Guardian‘s Justin McCurry. “Ramsay can’t possibly like the ‘pretty terrible‘ beer, suggested one. Cass is ‘maybe the worst beer in the world,’ a second wrote. Another offered a reward for proof that Ramsay was a Cass drinker” before OB paid him to be. “The irony of a high-brow chef endorsing bottom-shelf swill has not been lost on the South Korean public,” writes Korea Exposé’s Steven Borowiec. The Korean site “OhMyNews ran an article questioning whether Ramsay really thinks Cass is delicious, or if the company bought his approval. Even the pro-business Chosun Ilbo ran a piece cataloguing South Korean netizen befuddlement over Ramsay’s professed affection for Cass.”

Yet if it surprised few observers of Korean affairs that it took a Westerner to call out the shortcomings of Big Korean Beer, it surely surprises even fewer that Big Korean Beer brought in another Westerner to sing its praises. The move recalls the days when a Japanese brewer like Kirin would fly in the likes of Harrison Ford to endorse their (somewhat more flavorful) product, but in those pre-Youtube days few outside Japan could easily see the resulting TV spots and call him a sellout. Now, when Gordon Ramsay lends his credibility to a large east Asian corporation, the world finds out immediately. Not that OB hired him for his influence among his considerable Western fan base; what matters is the sway he holds over Koreans.

The farther outward Korea has turned over its past half-century of astonishing economic development, the stronger the perception, especially among the young, that the homeland’s offerings pale like a glass of Cass in comparison to those of the rest of the world, especially the West. And so it counts for that much more when someone from the West acknowledges, much less displays enthusiasm for, anything Korean. As the success of Tudor’s both appreciative and critical book in Korean translation demonstrates, Western enthusiasm need not come unqualified to be taken seriously. I’ve heard a fair few academics here say that it made them see their own country more clearly than ever, and perhaps OB wants to harness that sort of reaction to turn Korean attention back to their trusty old national lager, seeing it through Ramsay’s eyes — and more importantly, tasting it with what he insists is his palate. Ramsay called Cass a “beer of the people” at a press conference, adding that, “in these difficult times, with the economy in recession, it is a beer that can easily be bought and have some fun with. It’s not pretentious.” The sentiment aligns with his no-nonsense, working-class image — at least in Britain, where these things matter so much that the capital crime of pretension, or “getting above yourself,” can wrath swifter and more severe than Ramsay or any other famously volatile chef unleash in the kitchen. In Korea, where getting above yourself has, in one sense or another, been the national pastime for a few generations (and where an Oxford man like Tudor couldn’t get people to stop mentioning the school he graduated from if he wanted to), I suspect his appeal has much more to do with his uncompromising sternness.

OB’s marketing push has branded Ramsay as Raemji-hyeong (램지형), or “Big Brother Ramsay,” and his persona does suit the culturally acknowledged role of the nearly impossible-to-please older sibling, parent, or teacher everyone in Korea seems to have in their lives. (The same cultural sensibility keeps a place of honor for such figure no doubt also did its part to make Damien Chazelle’s Whiplash, about a conservatory student and is ferociously demanding instructor, a surprise blockbuster here.) It also fits with modern Korea’s unfortunate tendency to try to purchase prestige for itself through Western celebrities. The effects of that manifest everywhere, most notably in architecture, where Koreans never seem to win the commissions for the most high-profile projects: the much-promoted (and even more intensively photographed) Dongdaemun Design Plaza, for instance, went to the late Zaha Hadid, another Brit.

As far as Ramsay and Tudor, the Korean press wasted no time setting them against each other, drawing a true money quote from the former about the latter: “When I do meet him, I will give him a kick in the arse.” In the event, neither the meeting nor the arse-kicking seems to have taken place: Ramsay’s trip has ended, but he remains a daily presence on the billboards and video screens of urban Korea. Cass seems likely to come out of all this with a brand neither much tarnished nor much burnished. In fact, in the middle of writing this piece, I went out with friends to a thoroughly Korean dinner of chicken feet heaped high on the grill, laden with garlic, and spiced to bright-red perfection. Only after we’d finished our first economy-sized bottle of beer did I realize we’d been drinking Ramsay’s bottom-shelf swill of choice. I may not have called it “bloody fresh,” whatever that means, what can I say? It did the job. 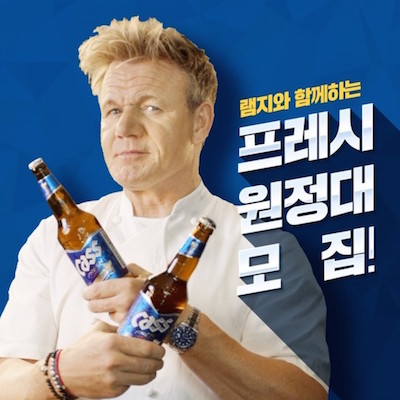