When we moved to Seoul, my girlfriend and I, not unstrategically, chose an apartment located near several major universities. This guaranteed a robust level of cultural amenity; imagine, if you will, the features of several American “college towns” all stacked up within a few square miles. One morning after getting settled in, we took a walk up toward the Film Forum, a kind of miniature art-house multiplex right across the street from Ewha Womans University. There we caught a screening of what, for me, made for the ideal first movie with which to begin my life in Korea: Hong Sangsoo’s Right Now, Wrong Then (지금은 맞고 그때는 틀리다).

Koreans often ask me what got me interested in their country, a question that inevitably leads to Hong Sangsoo. Nothing has motivated me to immerse myself in things Korean as much as the language itself (about which more another day), but my first exposure to the language came through the movies. I got that exposure when Korean cinema enjoyed its first international boom in the early 2000s, which flung out into the world such slick but thematically and tonally distinctive pictures as Park Chan-wook’s Joint Security Area (공동경비구역) and Oldboy (올드보이), Bong Joon-ho’s Memories of Murder (살인의 추억) and The Host (괴물), and Kim Ki-duk’s Spring, Summer, Fall, Winter… and Spring (봄 여름 가을 겨울 그리고 봄) and 3-Iron (빈 집).

Having watched through the filmographies of those Korean auteurs, I found my way to Hong, perhaps the auteur-iest of all Korean auteurs. By that I don’t mean to call him the absolute best filmmaker of the bunch (though I do follow his work with by far the most enthusiasm), but the one who — having made a movie a year for almost the past two decades now, each on a shoestring budget and some with scripts written shooting day by shooting day — has arrived at the most developed style, one he uses to examine, with clear eyes from many different angles, the stories that unfold when a certain type of man (often an filmmaker or academic) and a certain type of woman (often an artist) collide in modern Korea.

This has increasingly drawn accusations that Hong “makes the same movie over and over again,” a charge I can accept, but only to the extent that, say, Mark Rothko painted the same pictures over and over again. Or maybe I should compare Hong to one of the Cubists, so intently has he concentrated on viewing his subject matter in as many ways as possible in a single work, telling a story several times over but with slight variations, or from one character’s perspective and then another’s, in order to shed light from all possible directions.

Hong has kept with this impulse in Right Now, Wrong Then. A director named Cheon-soo arrives in the city of Suwon, twenty miles south of Seoul, to speak at a screening of his movie. But he’s come a day early, and while killing time at a nearby historical site happens to meet Hee-jeong, a painter, who hasn’t seen his work herself but still displays some excitement at meeting a director of some renown. He invites her to coffee, then she invites him to her studio. He takes her to a soju-soaked dinner during which he professes his love for her, and then she brings him along to a party (otherwise attended only by a trio of middle-aged women) she’d previously promised to attend.

Then the story starts over, but with variations. This time Hee-jeong, who’d previously seemed so hesitant to reveal to the filmmaker her work in progress, now shows it more confidently. This time Cheon-soo offers constructive criticism (emphasis on the criticism) rather than the fulsome praise he heaped upon her canvas in the first version. This time, as Hee-jeong sleeps off her drink in another room, Cheon-soo sees fit to suddenly, drunkenly undress in front of the horrified ladies at the party. This time Cheon-soo gets along with his interlocutor at the screening’s Q&A the next day, whereas the first time he wrote him off as an incompetent. The second reality, on the whole, ultimately feels preferable to the first, if only as a 51% positive outcome versus the first reality’s 49%.

The latter version of events certainly feels preferable for Cheon-soo, despite or possibly because of that impromptu, unwanted strip show. At least it goes better than the first iteration of the party, during which Hee-jeong repeats Cheon-soo’s praise of her painting, lines the other women at the table, fans of his, recognize from the descriptions of his own work he’d given before in interview after interview. This leads to talk of all the rumors floating around of his various affairs with female crew members. Thus his game unravels, and the first telling of this story (which the film presents as Right Then, Wrong Now) shows him up, like many a Hong film has shown many a male protagonist up, as the pathetic playboy he is.

“What can we do about this Korean man?” exclaimed one of the female characters of In Another Country (다른 나라에서), four Hong films ago, upon catching one of the male characters in the philandering act. We might consider that a driving idea of Hong’s filmography, which can sometimes seem like one big exercise in exposing the delusion and foolishness of men enslaved simultaneously by both their high, inflexible romantic ideals and their low, insatiable sexual desires. (Yet as much as critics have written much about the problems of Hong’s male characters, I believe the haven’t sufficiently acknowledged those of his female characters, who respond to the men’s buffoonish rigidity with a centerless passivity I find downright scary.) 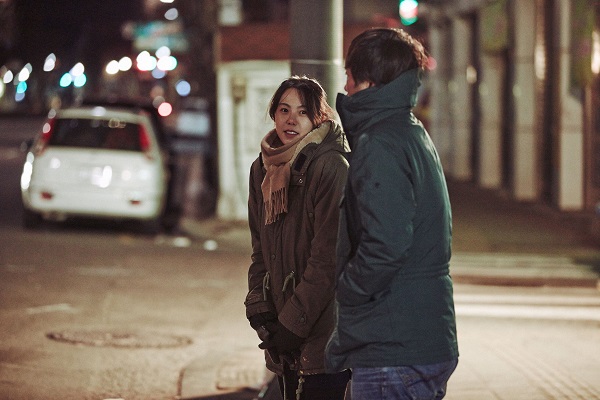 The ideals of Hong’s men never get satisfied, but the desires occasionally do; he used to punctuate his movies with some of the least appealing sex scenes in modern cinema — an unblinking camera, bright lights, pale flesh, bare rooms, dialogue like “Can I moan?” — but has moved away, mercifully, from that terrible frankness. Right Now, Wrong Then, in fact, contains neither the image nor even the implication of sex, and for its particular story — or rather, for its particular stories — benefits from that: despite the varying particulars, Cheon-soo and Hee-jeong’s brief relationship sputters out both times, and feels all the more real for it.

Korean cinema as a whole first fascinated me for a variety of reasons, among them the fact that, even in this day and age, it so often accomplishes the rare feat of pulling off melodrama, or if not melodrama, what might otherwise Westerners as preposterously heightened emotion. Hong’s movies, apart from an outburst from an especially frustrated and/or inebriated character every now and again, succeed by doing the opposite, ratcheting down the Sturm und Drang until they become a mirror reflecting a certain segment of Korean society. (Even those who dislike Hong’s work never do so on grounds of implausibility.)

But given the way Hong constructs his films, I’d do better to describe each of them as a series of mirrors, attached but facing in slightly different directions, hence the comparisons commonly made between him and predecessors as different as Éric Rohmer and Woody Allen. A more accomplished writer friend once gave me this piece of golden wisdom: “If you focus on the structure, the content takes care of itself.” That could well be another driving idea of Hong’s filmography, though I don’t think he chose his subject matter of the miscommunications, pretensions, and humiliations that occur when man encounters woman wholly accidentally.

I often think of Anthony Lane’s words: “The landscape of desire, as laid out before Hong’s unflustered gaze, could scarcely be further from an idyll.” Whether that gaze applies only to Korea’s landscape of desire (Hong has set only one picture outside his homeland, in Paris, but he kept all the characters Korean) each viewer will have to determine for themselves. But I get the sense that Hong understands the universality of his work. I once heard him respond, at a Q&A, to the question of whether he would ever consider telling a different kind of story. He said that he finds nothing more fascinating than the relationships between men and women, and wouldn’t stop examining them until he understood them. “And if anybody tells you they understand them,” he added, “they’re lying.” 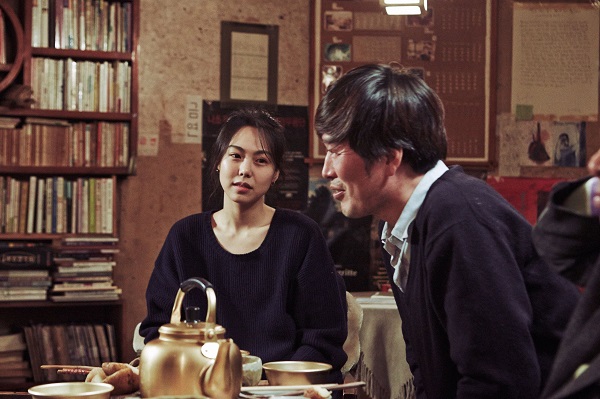