During the colonial period, the Japanese invaders determined what would and would not happen in Korean literature, but liberation freed Korean to choose its own path. At the same time, for a strongly national literature, colonial history and the traumatic events that it contained left a strong impact on the culture that would reverberate through the years. Worse, further tragic events would follow, and they, too, would leave their footprints on Korean literature.

The liberation period was brief, lasting exactly three years from the Japanese surrender of August 15th 1945, to August 15th 1948, when Korea was bifurcated into North and South Korea by the creation of separate regimes. The this period started with high hopes and even giddiness as liberation seemed to promise whatever could be imagined. This period was the first time in modern Korean literary history, in fact, that authors were allowed the full freedom to write. However, it quickly became clear that real independence had not been achieved, and the national division that followed put to the idea of a unified, independent Korea completely to rest.

Political factionalism broke out as soon as Japanese rule ended, and the period between the end of World War II and the start of the Korean War was not a peaceful one. Perhaps the first evidence of a split appeared among authors themselves, with leftist authors creating The Center for Construction of Korean literature the day before liberation, and rightist authors following a few months later with the Central Cultural Association. There was quite a great deal of political and theoretical angst and discussion too detailed to discuss here, but it is safe to say that tension mounted across the entire period.

The kinds of tensions that developed in the aftermath of liberation were, of course, explored in fiction. Among the best of these stories on the topic of inter-regional stresses is “Sun-i Samch’on” (1978) by Hyun Gi-young. It begins in-flight with the narrator on his way to Jeju Island to attend a memorial service for his grandfather. There his extended family gathers and the death of his aunt, Sun-i Samch’on, is also revealed. With this revelation begins a passionate discussion of the tortured past of this island where thousands of people were brutally killed by military forces, and in particular the events surrounding a people’s uprising on April 3rd 1948 where 30,000 people were massacred, the result of tension between right-wing and left-wing forces as well as tension between the Korean mainland, exemplified by Seoul, and Jeju.

The story is told on a small scale with Hyun personalizing the events through flashbacks of an aunt, who suffered greatly during and after a massacre and never truly recovered. Sun-i Samch’on’s death, revealed to be by suicide, is a direct result of a horrible massacre, which only she survived. Hyun’s writes not only beautiful prose but a testament to his authorial character, as he himself was detained and tortured by the police because of the political nature of writing.

Ch’ae Mansik, discussed earlier in the context of the colonial period, was one of the more amusing writers of this era. Ch’ae sometimes writes just on the edge of cliché, particularly when discussing character traits, but always manages to bring the point home with some sly or indicative plot event. In 1946 Ch’ae wrote “Constable Maeng,” through the eyes of the titular constable, a snapshot of Korean history just after Japanese colonization has ended. He takes jabs at the Japanese, Korean collaborators, and the new administration installed by the United States alike. As a serious work written in a light-hearted tone, it begins by comparing its Constable Maeng to Mencius (also known as Confucius) before quickly backing off to show a man attempting to take stock of the changes brought by liberation and his own involvement in the colonial regime. Because Maeng is incompetent at graft, he considers himself a good man; his certainty is rocked when a gang member and murderer are deputized. Maeng quits his position upon realizing that he, too, had been a criminal: “Was there ever really a difference between the constables and murderers? All we ever did was extort goods and kill innocent people.”

Ch’ae also wrote “My Innocent Uncle,” “A Ready-Made Life,” and “Once Upon a Paddy” (1948), all available in one thin volume, My Innocent Uncle. The first two stories are from the colonial period, but “Once Upon a Paddy,” is across the two eras and demonstrates some of the economic woes engendered by liberation. In it a family under colonial rule has saved and struggled to purchase a paddy, but are quickly stripped of it through legal theft by fellow Koreans. When the “liberation” comes it does nothing to help Han Saengwon, an aged relic of the original family. As the story begins, Han says, “Sure Korea was independent, but there wasn’t a chance in hell that things would suddenly improve for the poor farmer.” The story ends proving Han correct, and his last words are the bitter: “I sure am glad I didn’t shout ‘Manse!’” (The common expression daehan minguk manse roughly translates to “Long live Korea.”)

While the liberation government did implement a kind of “land-reform” policy, its effect was only to strip peasants of their land. The holdings of large landlords were broken apart, but since that land was then turned over for sale, the poor were effectively priced out of purchasing the earth they had previously tilled. Yi Taejun’s “Before and After Liberation” begins just at the end of the war, with Koreans still  conscripted into the Japanese army but the likelihood of Japanese collapse seeming likely. The story continues through liberation, outlining the political and theoretical chaos and struggle within the field of Korean literature. The narrator, Hyon, is being hassled to, among other things, change his name to a Japanese one. Hyon moves to the countryside but cannot escape the larger issues of his society and realizes his writing has been nothing more than a “pastime.”

In fact, Hyon’s wife construes his move as unpatriotic and bourgeois behavior intended to avoid larger commitment to social issues. The Japanese continue to pressure him to do various unpatriotic things, and just as it all seems about to come to a head, the Japanese surrender. Here the story gets a little confusing, but Yi also has Hyon describe the writer’s groups and counter-groups that formed just after colonialism ended, along with all the political winds then blowing in Seoul. These discussions may seem a little academic, but the theoretical and political schisms described had very real implications for some authors who moved North in reaction as well as to those who stayed in the South for the dictatorial governments to come. By the end of the story, hopes of literary unity have collapsed and all people share are two things: first, a desire that the country not  be divided, and second, a suspicion about the motives of their countrymen that would shortly lead to the country’s division anyway.

The mention of Yi Taejun brings us to another interesting aspect of the time: Yi and many other authors eventually chose to migrate to the North. This seems foolhardy in retrospect, but at the time, these migrants operated under notion that politics in North Korea were going to be “better” than in the South. Other authors who went North willingly included Han Sorya, Yi Kiyong, Kim Namchon, and Im Hwa. Some, like Yi Kwangsu, ot caught up in history and ended up in North Korea without intent. By one estimate, nearly one-third of South Korea ‘s writers, a total of more than one hundred, crossed the border.

For most of these authors, the trip North ended poorly, but one, Han Sorya, made a career out of it. Despite having had some literary success in the 1920s, Han is best known in the West, if known there at all, for his 1951 story “Jackals.” It hits some predictable notes: a landowner has the nickname “Piggy,” a poor oppressed odd-jobs man who is about to be fired from a position as Piggy’s “night-soil” man (in charge of disposing of Piggy’s sewage), and evil Western missionaries. There is some good writing, but the story chugs along toward a predictable ending with those evil Westerners temporarily ascendant but clearly awaiting the judgment of the bloodied and unbowed Korean people. The plot begins with a tossed-out rubber ball, includes a ten-year old-punching another nearly to death, and ends with a death-by-physician — displaying no interest whatsoever in direct representation!
Han is perhaps more famous for his astute navigation of the North Korean political system: even before the war, he had become a confidant of Kim Il-Sung. Han had a history of searching for favor, and consequently had been a collaborator during the Japanese colonial era. He also seems to be the writer who came up with the phrase “our Sun” to refer to North Korea’s leader, and he quickly became a leader of his personality cult. Han was relentlessly political, and authors he did not like, or who stood against him — a group including including Yi Taejun and Yim Hwa — tended to “go away.” Han was officially embedded in the Juche pantheon during Kim’s famous 1955 speech. Han remained there until, predictably, the monster turned against him in a purge in 1962. Han was exiled in that year and, though apparently rehabilitated in 1969, basically disappears from North Korean life at that time.

Han Sorya’s life-story is a good place to end the liberation period, as it neatly demonstrates what was next to come. On August 15, 1948, the Republic of Korea was formally established, with the Democratic People’s Republic of Korea soon to follow. At this point, the nation was officially split, and the path to war was clear. Liberation was over, and with it the literary focus on its state. 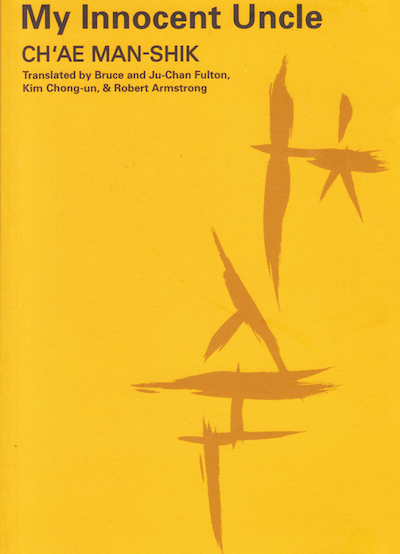