WE LIVE IN A GOLDEN AGE of television, as the recent Emmy Awards broadcast never failed to remind us. Although the Emmys have been mocked for taking this message a bit too earnestly, it’s hard to deny that many recent scripted shows are among the best in the television’s history, and that the combination of niche channels, on-demand programming, and (for some) lack of dependence upon advertisers have pushed television in compelling new directions in the past 10 years. Although HBO deserves – and takes – much of the credit for such “quality tv,” praise is also due to cable networks such as FX and AMC, as well as to broadcast television, particularly the WB and UPN (now merged as the CW) who early on took risks with expected formats in their struggle to establish brand identity. These youth-oriented channels were important particularly in demonstrating an interest in genre programming that has only more recently been taken up by the Big Four. The WB’s Buffy the Vampire Slayer (1997-2002), long a darling of academics for its feminist themes, innovatively experienced with the medium, such as the silent episode “Hush.” On UPN, teenage detective Veronica Mars (2004-2007) similarly offered a pretty blonde who was also powerful and smart, and now has made television history by being the first series brought to the big screen (next year) via direct funding by its fans through Kickstarter.

These and other genre series have nurtured some of the biggest talents in Hollywood today, including Joss Whedon, followed as auteur by his many fans and recently propelled into greater renown with The Avengers (2004); Shawn Ryan, who began as a series writer on Buffy spin-off Angel (1991-2004) and went on to create The Shield (2002-2008), a critically acclaimed police drama; J.J. Abrams, whose sf-flavored Lost (2004-2010) sparked the most intensive discussion of a series as it aired until the phenomenon of Breaking Bad (2008-2013); and Vince Gilligan himself, who got his start on The X-Files (1993-2002). Genre series such as Buffy were among the first to experiment with the story arcs now central to premium cable series, and often offered central and powerful roles for women, in contrast to the masculine anti-hero dominant in the “quality tv” lineage from Tony Soprano through Don Draper to Walter White. Emmy Awards seldom recognize genre television except for technical achievements, however, and preconceptions prompt many never to tune in at all. Yet the widespread popularity of Lost and the massive success of genre franchises in film such as The Avengers and Twilight have encouraged networks – cable and broadcast alike – to add genre shows to their lineups.

So has science fiction (sf) television been unjustly maligned? Although I’d be the first to agree that many sf series fail to inspire the hope that “science fiction” and “quality” would together, I also strongly believe in the potentials of both genre and medium. Despite glib (if also campy and fun) series like Buck Rogers in the 25th Century (1979-1981) or Mann & Machine (1992), Ron Moore’s gritty and 9/11-inflected reboot of Battlestar Galactica (2004-2009) demonstrated to genre and non-genre aficionados alike that the key criterion is execution, not concept. Long before Moore reminded us to take the genre seriously, Rod Serling, whose provocative writing for other series had met with resistance, effectively used sf’s estranged perspective on reality to offer pointed commentary on contemporary political and social issues in The Twilight Zone (1959-1964) without ruffling advertisers’ feathers, turning stigmatization into opportunity.

So, has sf television’s moment finally arrived? Mainstreaming of genre tropes in film and digital games has removed – or at least reconfigured – the geek stereotype. Salman Rushdie is rumored to be writing an sf pilot; Steven Spielberg has financed a live-action series based on the game Halo. A series adapted from a Stephen King story by comic writer Brian Vaughn, Under the Dome (2013), tilted the scales in CBS’s fight with Time Warner Cable, and Chris Carter is developing new series for both of AMC and Amazon Studio. Perhaps we are about to enter a period of quality sf television. At the very least, its conditions of possibility exist.

Fox makes a strong attempt to capture the American Horror Story audience with Sleepy Hollow, a mash-up of Washington Irving’s “The Legend of Sleepy Hollow” and “Rip van Winkle,” in which our jilted schoolteacher, Ichabod Crane (Tom Misson), is transformed into a displaced Oxford History professor, sent by the British to fight American rebels but ideologically converted to Revolution’s side. As in Irving’s story, the Headless Horseman is a Hessian soldier fighting for the British but in this case also a horseman of the apocalypse, enlisted on the side of empire and fought by a George Washington whose Revolutionary War is thoroughly entwined with struggles between white and black magic.

The series joins other recent sf series Revolution (2012–) and Falling Skies (2011–) in placing a debate about “true” American identity at the centre of its narrative, working through the tensions of a nation founded in discourses of freedom now infamous for policies such as “torture memos.” In Sleepy Hollow, the Revolutionary War is fought not just for the freedom of “this” country but to prevent the apocalypse itself. It’s most impressive innovation, however, is casting African American actor Nicole Beharie as Abby Mills, the police officer who becomes Crane’s partner. Genre television has a poor track record for casting non-white actors, and an embarrassing history of killing off their non-white characters after only a season or two. I’m thus hopeful this series will last, but wish it were more refreshing in other choices as well. Sure to attract fans of paranormal investigative series such as The X-Files (1993-2002) and Fringe (2008-2013), Sleepy Hollow also seems poised to draw viewers of supernatural series, but its polarized vision of good and evil suggests that it could quickly become bland. The most recent episode’s vision of Crane’s astonishment that his former allies, Native Americans, are a repressed and impoverished minority in the new country implies a worrisome tendency toward self-congratulatory revisionism.

The most highly anticipated series was, of course, ABC’s new Agents of S.H.I.E.L.D., benefactor of build-in audiences drawn from Avengers franchise films and from devoted followers of all projects involving Joss Whedon. The heavy promotion of soon-to-be-released film Thor: The Dark World during commercial breaks capitalizes on these connections, and suggests that Agents of S.H.I.E.L.D. is best poised to benefit from industry shifts toward transmedia storytelling. The pilot episode delivered on the hype, combining sufficient references to ongoing mythology to satisfy devoted fans without alienating other viewers. Joss Whedon is not the showrunner for this series – a role filled by his co-creators Jed Whedon and Maurissa Tancharoen – but his distinctive humor and ability to play with genre tropes are evident: Agent Coulson (Clark Gregg), mysteriously resurrected from his apparent death in The Avengers (2012) to serve as team leader and connective tissue between film and series, emerges on cue just as someone reminds viewers he is dead, but playfully acknowledges that the scene is conventional by quipping, “Sorry. That corner was really dark and I couldn’t help myself.”

The pilot strives to have something for everyone – the super-trained but not super-powered Agent Ward (Brett Dalton) for those who like their action-adventure straight; the tech-geeks Agent Fitz (Iain de Catestecker) and Agent Simmons (Elizabeth Henstridge), who combine a CSI-esque love of forensic detail with the pure Whedonverse charm of nerdy experts; a powerful and attractive female lead in Skype (Chloe Bennet), whose back story is sure to appeal to social media enthusiasts; and Agent May (Ming-na Wen), who has enough hint of a mysterious past to create interest in longer story arcs and (another Whedon trademark) reverses gender expectations by being female and really good with military tech. Of course we also get that famed Whedon dialogue of memorable insider one-liners such as “with great power comes ….. a whole ton of weird crap that you are not prepared to deal with.”

This series seems poised to live up to Whedon’s track record for using both genre and medium to tell socially and politically engaged stories. In the pilot, working class Mike Peterson (J. August Richards) gains superpowers due to an illegal experiment with super-soldier “extremis” serum, providing a link to franchise stories. Although this is a typical “origin story” for super-hero or super-villain (see further Spider-Man (2003), Spider-Man 2 (2004), The Amazing Spider-Man (2012), etc.), and the plot plays out along expected paths, more or less, there are a couple of key exceptions. First, in an emotionally satisfying if also somewhat trite twist, Peterson does not either loss his humanity (and thus authorize his death at superhero hands) or sacrifice himself drawing on the last dregs of vanishing humanity: instead, he is cured. More interesting, however, are the comments on the plight of the working classes that motivate his rage and outbursts of super-villain petulance. Before his breakdown we see him search the job listings in vain, and he snaps when his former supervisor refuses to give him his old job back, insinuating that taking sick leave when injured makes him an unreliable employee. Although the angry Peterson shouts that assigning blame is easy, “like the stories we used to read: you’re the bad guy and I’m the hero,” Agents of S.H.I.E.L.D refuses to neatly tie up loose ends.

Peterson in his outrage, however justifiable, unfortunately falls into the stereotype of the angry-black-man, dangerously out of control. I have faith in the writers, however, to see beyond such reductionism, and the details about Peterson’s struggles to find work are key here. Like Robert Morales and Kyle Baker’s revision of the Captain America origin story in Truth: Red, White & Black (2003), which details the experiences of many black men who suffered as subjects of early experiments before the military perfected their protocol in Captain America, Peterson reminds us “all over people are being pushed down, being robbed” by systemic discrimination and enslavement to debt, that heroes are needed to fight structural oppressions as much as charismatic big bads.

It remains to be seen if Agents of S.H.I.E.L.D can balance its many competing fan bases and priorities and deliver even more innovative uses of genre motifs. The second episode stressed team building and characterization – key to making us want to spend time each week with these characters – and although it was less socially engaged that the pilot, Skype nonetheless managed to link her crowdsourcing ideal not only to the cooperative work that allows them to save the day in this episode but also to a social media as a method for political organization against corruption in Peru, the country where they found this week’s mysterious artifact. Yet the cameo by Samuel L. Jackson as Nick Fury, as well as the firefights and fast-paced chase scenes, suggest that in the short term Agents of S.H.I.E.L.D is more concerned with translating big screen aesthetics onto the small screen. In this the series runs the risk of becoming reduced to some new iteration of viral advertising for Thor: The Dark World and next spring’s Captain America: The Winter Soldier, so let’s hope future episodes shift the balance away from the films and toward the promising possibilities for reinventing the super hero team.

As we head into week two of premiere season, more new sf hopefuls are to come, including many offerings from youth-oriented CW. We’ll also check-in with returning series. Nothing yet achieves the promise of what I know sf television could be, but the 2013-2014 season has come a long way from your grandfather’s science fiction tv. 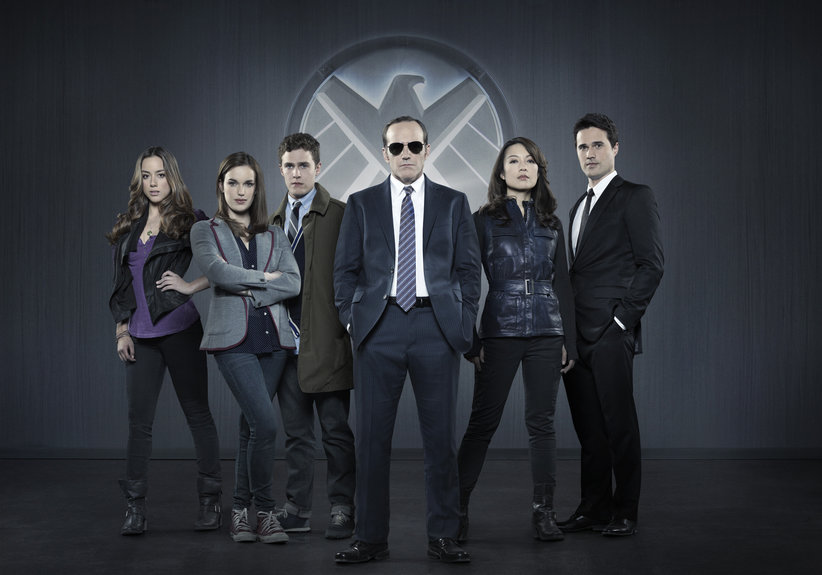