I’LL BEGIN WITH A DISCLAIMER: as much as I love SF, time-travel stories are my least favorite.  Granted, notable exceptions abound: H. G. Well’s Time Machine, which arguably launches the genre of SF as a whole, and Greg Benford’s Timescape are both brilliantly executed fables that use time travel to meditate on social and ecological injustices.  In the hands of many SF TV writers, however, time travel seems largely an excuse to create impenetrable plot twists, a lazy narrative device leaving viewers scratching their heads and propelled to watch the next episode for some sense of resolution.  I love the Star Trek franchises, but their time travel episodes are amongst the worst offenders in this category of sloppy story-telling.

And then there’s Continuum.  The Canadian channel Showcase first broadcast this series in May 2012, and its third season is currently in production.  And despite my bias against time travel narratives, I think Continuum might be about the best SF TV I’ve seen in the last decade.  If you’ve missed it, you need to catch up before the next season airs.

Continuum’s plot primarily revolves around a future cop, Kiera (played by Rachel Nichols), who works in 2077 for the corporate state, federal governments having been taken over and run, in a rather fascist fashion, by profit-mongering corporations.  Kiera accidentally (maybe, maybe not) gets sucked into a time vortex that a group of condemned future terrorists open up shortly before their execution for having blown up corporate headquarters and killing thousands of people.  (Think 9/11 and the attacks on the WTC.)  The terrorists want to come back to the present to change things for the better (or at least their version of the better).  Kiera and the terrorists have to insinuate themselves into present day Vancouver–Kiera as a law enforcement agent, the terrorists as various activists, moguls, and present-day terrorists.  Along the way, Kiera and the terrorists run into a young Alec Sadler (played by Erik Knudsen), who, in the future, becomes one of the prime architects of the future corporate state, as well as the person who may be trying to sabotage the corporate state he’s created.  Kiera reveals who she is to Alec, who, a computer genius, is maybe not so stunned to learn that he will become the leading figure in creating the technologies that become the complete surveillance state of 2077.  Alec and Kiera help each other, for the time being, and are assisted and antagonized by a strong cast of characters, including Kiera’s police partner Carlos (played by Victor Webster) and former terrorist and now sketchy present-day entrepreneur Matthew Kellog (Stephen Lobo).

This sketch doesn’t even begin to do Continuum justice.  The plot increases in complexity with nearly every episode, leading you to a spectacular season two cliffhanger and leaving you wondering what the master plot really is: who really knows what’s going on, who’s pulling the strings, and what’s the end game?  Continuum offers us lots of loops, and at its best it’s reminiscent of Kage Baker’s delightful Company novels, which keep you guessing about what designs the future really has on the present. In less capable hands, such stories would be a mess.  But what salvages Continuum are the risks the show is willing to take with the viewers’ sympathies and identifications with different characters.

Let me explain.  When watching the first few episodes of Continuum, I have to admit I was kind of appalled.  Vancouver, where the story is set in both the present and the future, becomes a pretty but nasty place in 2077, a place where the trains run on time—or else.  Think corporate fascism–a timely trope given that, in the US at least, corporations are essentially given the same rights as people but also have access to incredible resources to enforce their will and manipulate the legal system.  The SF extrapolation is totally believable.  While we don’t get a complex sense of how corporations rule, we see many examples of their brutal and total control, complete surveillance, and limited protection of civil liberties; desirable commodities are only accessible to the bureaucratic class that keeps the companies running and profitable. The “smoking man” (William B. Davis) from X-Files plays the elder and future Alec Sadler, who seems to be in control of everything as head of the surveillance company running the state.  That casting choice alone signals that these are the bad guys.  Kiera is one of their hired guns, and we see her in multiple episodes, flashing back and forth between the present and the future, as a brutal enforcer, hurting those who defy the corporate police state.

But it’s her viewpoint we are asked to identify with primarily, and the story is largely given to us through her eyes.  And that’s our dilemma as viewers.  She represents an icky future, and you’re invited to sympathize with her desire to protect it.  Granted, she’s tracking down terrorists, who battle that state through 9/11-style attacks.  But wait: even that is complicated, because, well, you might not agree with their tactics, but you also don’t want to defend the fascist corporate state either.  And, as the series progresses, you are given no easy answers here about whom to like, or even whom you should be identifying with.  On one hand, we watch the corporate police state being born, particularly through the use of digitally collected information to keep tabs on the lives of citizens and arrest them even for sympathies that are anti-corporate; think of the Patriot Act as it might be administered by Wall Street.  One character from the future, Escher, represents a “corporation” that fully funds the Vancouver police force to stop the terrorists by any means necessary, especially after they blow up a building in 2012.  At one point, Kiera herself resorts to torturing Julian, Alec’s estranged step-brother who is helping the future terrorists in the present.  On the other hand, however, the show spares no love for the terrorists either.  Julian is made to look like a young Osama bin Laden, and his tactics seem especially sketchy; remember that blown up building I mentioned?  To complicate matters further, we also see how the present-day “terrorists” increasingly seem to want to fight with ideas, not force, and Kiera herself starts to doubt the justness of the future corporate state she’s trying to protect in the present.

You can probably tell that the show is steadily pitching itself as a complex reading of the war on terror at a time of economic crisis—a heady but smart conflation.    Early in the second season, we see Julian, in prison, reading The White Guard, an early book by Soviet-era writer Mikhail Bulgakov.  It’s a throwaway scene, but maybe a signal nonetheless if you’re paying close attention. Bulgakov, whose most famous work is The Master and Margarita, wrote The White Guard to depict the many factions (socialist, monarchist, etc.) fighting over Kiev during the 1917 October Revolution.  Bulgakov’s own sympathies were mixed, and he became a critic of Soviet policies, especially under Stalin.  So, Julian, the revolutionary, reading Bulgakov might be a clue that the show’s “take” on the war on terror, corporate malfeasance, and the economic downturn will not be simple.  At the very least, it’s hard to know who the good guys are, and your sympathies for one might have to change over the course of time as you weigh tactics, values, and endgames.

Such steady confusion of sympathies makes for heady, engaging viewing as your identifications with different characters form—and are then challenged.  The plots within plots call to mind Fringe, that rip-off of The X-Files.  But while Fringe and X-Files were willing to play with their main characters’ foibles, neither risked identifications as strongly as Continuum, which, at its best, makes you question your loyalties to characters as a way to make you question what you really think about terrorism, as well as how far we should–and should not–go in defending an unjust economic status quo.  Tricky stuff here.  You wonder, does the repression of terrorism in the 21st century actually result in the corporate take over?  And might the terrorists have a point in organizing against the nascent corporate state?

What begin as extreme poles–fascism and terrorism–steadily become more nuanced over 23 episodes.  Ultimately, Continuum might really be about the re-education of Kiera, who seems led to question who bad the bad guys really are, and if she herself might be a bad guy.  As such, in asking you to identify with her, the show might play to our re-education as viewers, or at least prompt us to question our sympathies in the war on terror and the desirability of having corporations call so many political shots.  Early in the second season, one of the more brutal future terrorists asks Carlos, the present-day police detective, if he’s ever bothered by the injustices he sees, the ways corporations seem to manipulate the law and citizens to turn a profit.  Carlos replies, “Guess I’m just used to it.”  Travis answers: “They need your complacency.”  The exchange seems pitched not just to Carlos but to us, sitting comfortably (for now) in front of our televisions.

In figuring a war on terror and the rise of corporate interests, Continuum pulls no punches.  Given its subject matter, it shouldn’t.  This is complex stuff, deserving of complex treatment.  You should catch up before the third season airs—or before the corporate state bans such provocative viewing. 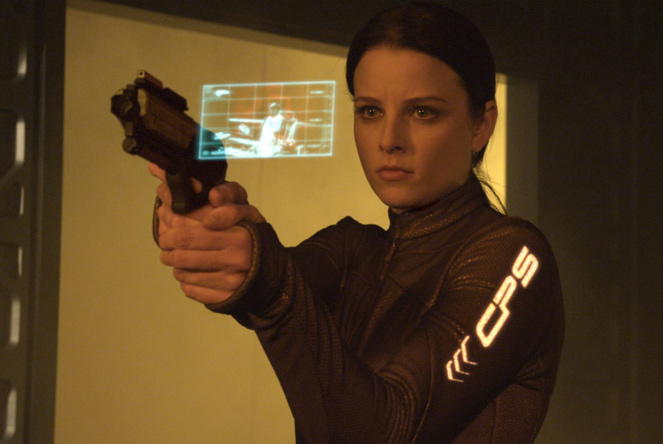