The second act of Edward Albee’s At Home at the Zoo was originally a self-contained one-act called The Zoo Story, written in 1958. In it, a laconic textbook editor named Peter is approached in Central Park by Jerry, a disheveled hustler who’s spent his life on the fringes and is desperate for a meaningful human connection. If you have had a homeless person approach you and start talking in a way that doesn’t make perfect sense, then you can imagine Peter’s unease. Likewise, if you’ve ever been surrounded by people, but still somehow managed to find yourself deeply, suffocatingly lonely, then you can imagine Jerry’s desperation. The play is about these two men: one who wants to mind his own business and the other who needs someone to talk to, and how they reach the worst kind of compromise. Laugh-out-loud funny at times and heart-wrenchingly sad at others, The Zoo Story is an almost-perfect short play.

It was originally produced Off-Broadway in 1960 (after a production in Berlin in 1959), along with Samuel Beckett’s Krapps Last Tape, and remained a staple in the American theater until around 2004, when Albee decided that the script wasn’t finished and he would expand it. He wrote a new act, initially called Homelife, which serves as a kind of prequel, focusing on Peter and his wife Ann, shortly before he makes his fateful trip to the park. Independently, Homelife is an exploration of marital dissatisfaction and how safety, at the expense of intimacy, can suffocate a relationship. Put together, they are At Home at the Zoo. The two acts serve as mirror images of one another, with Homelife expanding the world of The Zoo Story, while deepening its themes and ideas.

At Home at the Zoo is a breathtaking play that nevertheless offers some unique challenges. Luckily, Deaf West Theatre is up to the challenge, and their production — currently running at the Wallis Annenberg Center for the Performing Arts — is everything that I’d hoped it would be. Deaf West Theatre productions star deaf actors who perform in ASL, with an additional set of actors who provide the “voices” of the characters from offstage. If you don’t speak ASL and, for whatever reason, this aspect of the production is giving you pause — don’t let it. The experience was comparable to seeing a foreign film with subtitles and, in fact, rather beautiful.

Director Coy Middlebrook faithfully serves the text, keeping the emphasis on the words and performances (a few transportive sound and lighting effects notwithstanding). He also skillfully navigates the tricky task of incorporating the second set of actors from various parts of the stage. Karyl Newman’s zoo-themed sets walk the fine line of being subtly abstract and evocative without drawing too much attention to themselves. The production coheres beautifully, wrangling a necessarily idiosyncratic script without choking it.

This is particularly true of the actors who collectively sidestep the potential pitfalls of their characters. Troy Kotsur plays Peter with warmth and humor, as well as an urgency that keeps what could be a rather inert role alive through the long stretches of the play where he’s essentially just witnessing other people’s stories. Similarly, Amber Zion elevates what might have been a stock Albee character with her subtle and nuanced portrayal of Ann. There’s a moment towards the end of Act I that’s particularly touching. Peter and Ann playfully imagine themselves confronted by a tornado which destroys their Manhattan apartment:

And it would be terrifying and exciting, and it would sweep us all away, shatter the windows, rip the pictures from the walls…!

…knock over the cages and the birds would fly out!

…and the cats would see that, and they would catch the parakeets and eat them!

And as they play out the fantasy, they fall to the couch, Peter leaning over Ann, her dress hiked up, clearly approaching the kind of animal intimacy that has been missing in her life. And then, suddenly, it stops. Less because they don’t want to, and more because, it seems, they’re not capable of it. Or, rather, because Peter isn’t capable of it, and they both know that. Peter stands and straightens his clothes, while Ann crosses to the kitchen:

It’s a heartbreaking scene, smaller in scale perhaps than similar scenes in The Goat and Who’s Afraid of Virginia Woolf, but no less affecting.

But, of course, the show really belongs to Jerry. Played by Russell Harvard (who filmgoers will recognize from Paul Thomas Anderson’s There Will Be Blood), Jerry feels disturbingly authentic. He’s a man that’s prone to sudden outbursts as well as deep insights. A man who’s been worn down by a lifetime of loss and rejections, and is now coming undone by it all.

Watching Harvard’s performance, I was reminded of an encounter I had recently. I was walking my dog down Sunset when I noticed a man looking down at her, smiling. The man was probably in his forties but looked much older. Trying to make conversation, I asked how his day was going, and he looked up and snapped “They stole my cello and ruined my life! That’s how I’m fucking doing!”

This isn’t Jerry. Not exactly. But I suspect another five or 10 years traveling the road he’d been on would have brought him pretty close to it.

In Los Angeles, and in most places in the U.S., we see these people fairly regularly. Sometimes we engage and it’s nice; others, it’s less nice. But most of the time we simply don’t engage. At Home at the Zoo doesn’t give us that last option, which is what makes the play so uncomfortable, and in turn, rewarding. The character is unique in Albee’s canon. We’ve seen plenty of other Peters, but few other Jerrys. And that’s a shame, because he’s undoubtedly one of Albee’s richest and most interesting.

Deaf West Theater’s At Home at the Zoo is a wonderful bookend to an important playwright’s career. If you haven’t seen one of Edward Albee’s plays in a while and are looking to get reacquainted, this is the one to see. Don’t miss it. 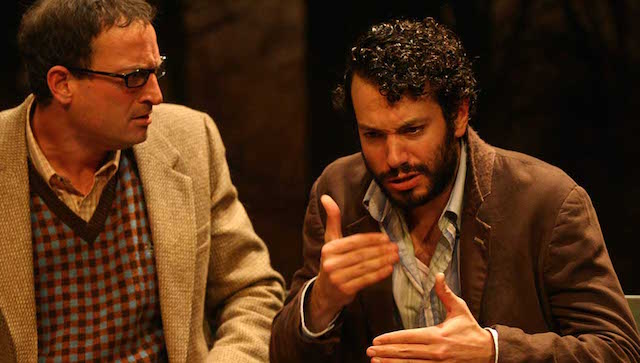