The current exhibition of Zoe Leonard’s work at the Geffen Contemporary at MOCA borrows its title from the collection’s centerpiece, a work called Survey. The eponymous work, produced between 2009 and 2012, is made up of 6,266 postcards of Niagara Falls collected by the artist. The postcards are arranged in stacks, with each stack composed of different cards showing the same vantage point. The stacks are arranged in correlation to their location along the falls. The work is a kind of sculpture, but also feels personal. You might be tempted to pluck a card from one of the stacks and mail it to your grandmother. In this way, Leonard does not resist the postcard’s inherent vernacularity. The cards are not purely formal objects; they insist on the casual intimacy between sender and receiver. This is Leonard’s specialty — to show the ways we use photography to commemorate, to tell stories, to understand our world.

The exhibition’s title suggests an introduction. Indeed, this show is one of the first major exhibitions of Leonard’s work in an American museum other than a retrospective of her work exhibited at the Whitney Museum of American Art earlier this year. Though Leonard is American herself, one reason for this recent embrace by American institutions might be the renewed circulation of her poetic text piece “I want a dyke for president,” which resurfaced on the internet in the wake of the 2016 election. The piece owed its viral success to how tragically foretelling it is. In it, Leonard writes, “I want to know why we started learning somewhere down the line that a president is always a clown. Always a john and never a hooker. Always a boss and never a worker. Always a liar, always a thief, and never caught.” Though the MOCA exhibition shows less of this explicitly political work (Leonard has made a number of works about the AIDS crisis and queer politics generally), Leonard’s social and political leanings come out in this exhibition in other ways as she documents her own life and history as a queer person.

It becomes increasingly apparent in the exhibition that Leonard is some kind of pack rat. The show begins with a work called 1961, a collection of blue suitcases she has accumulated, one for each year of her life. And yet, Leonard’s hoarding is neither chaotic nor arbitrary. Rather, she is very organized, methodical, and saves only what is important. The problem, or the explanation, is that so many things happen to be important. In an untitled series of black and white photos taken from the window of an airplane, each image shows clouds from a different perspective, each completely different from the last. The series relies on its collectiveness — just one image would not have the same effect. Leonard constantly returns to the process of accumulation. She wrangles with the complexities of photography, and the feebleness of our desire to freeze and preserve a moment or a form. Her works explore this aspect of the medium subtly, beautifully, but never sentimentally. Her photo collections convey a kind of melancholy, which she exposes as a residual quality of photography. Each photograph aches, suggesting loss — whatever is in the picture has now changed. The clouds change, the graffiti has been painted over, the trees have grown and died. This causes existential angst for viewers, too, because we understand that our lives and bodies are also in constant flux. The power of Leonard’s work is that she makes this existential point but does not dwell on it; she moves through it. She does not move toward anything in particular, but rather, moves to move, in much the same pattern as the subjects of her works.

Leonard follows the rules of photography while also making new ones. Or perhaps she just questions the old ones. Another work — a collection entitled How to Make Good Pictures — is composed of 429 books of Kodak’s photography manual of the same name. The Kodak manual is presumably not for professional artists, but for consumers who have just purchased a Kodak camera. Leonard’s work organizes each edition of the book into stacks, in a parallel presentation to the postcards in Survey. How does one make a good picture? Does this book really have the answer? Leonard’s work refrains from overtly mocking the book, but nonetheless observes the pedagogy of making good pictures or good art with a skeptical eye. In her other works, Leonard doesn’t take photos of her own, but instead photographs found images — collections of family photos or portraits. She always shifts her role between observer, viewer, and maker. Another project in which she questions not just the conventions of photography but of history itself is called the Fae Richards Archive, which she produced in collaboration with filmmaker Cheryl Dunye for the film The Watermelon Woman. The project is a series of staged photos of a fictional character, Fae Richards, an African-American actress born in the early 20th century. The project documents the span of Richards’s fictionalized life as it is portrayed in Dunye’s film. Originally made as a prop for the film, Leonard’s photo project now stands on its own as a unique work. It interrogates the ways we document and create our own history, and the ways we might recreate or alter our history with photography. The photos look convincingly aged, as if authentic photos from Richards’s lifetime. In fact, an uninformed viewer might believe Fae Richards is a real person, a thought both Leonard and Dunye seem satisfied to provoke.

Survey captures Leonard’s unique point of view and her persistent probing of the art of photography. As an artist, Leonard is quiet: she merely guides you, pointing things out, drawing your attention to the deep cracks in the pavement. She indulges in our discomfort with the innate tragedy of impermanence and the desire to counter this with a camera. 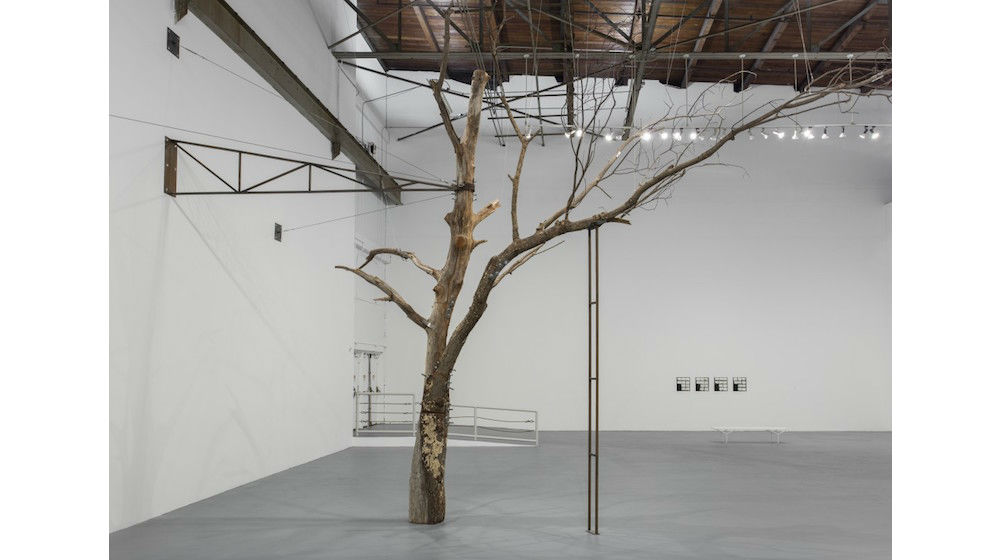