The crocodile of Taiwanese writer Qiu Miaojin’s recently translated first novel Notes of a Crocodile is and is not a metaphor, is and is not a character, is and is not really a crocodile at all. The crocodile — the subject of a half-dozen surreal and witty vignettes sprinkled throughout the novel’s overarching coming-of-age story — exists halfway, appearing here and there in fragments, snippets, prose that functions somewhere between fiction and theory. It’s that halfway feeling that’s so essential to and so refreshing about the book, the ambiguity of sex, gender, queerness, desire, and the question of identity itself, all the more sobering to read in today’s political climate. The crocodile’s favorite treat, the unnamed narrator slyly notes, is cream puffs. Pass the cream puffs, please.

I first encountered the work of Qiu Miaojin nearly two years ago, when I stumbled across a translation of her raw and elegant second (and final) novel, Last Words from Montmartre, completed shortly before her suicide in 1995. Why are we so fascinated by the suicides of writers? I wondered then and still wonder now. To read only that novel is to be left with an incomplete portrait of her work, and so the second I learned that Notes of a Crocodile existed and was going to be translated into English, I marked my calendar and began to wait.

Now the new book is here and, with its arrival, is a more complete image: Notes of a Crocodile, like Last Words from Montmartre, still crackles with emotion, but this is a slightly more cheerful, wryer, and youthful work. It’s equal parts postmodern experiment, bildungsroman, and a cracking good campus novel that explores a young woman’s coming to terms with her attraction to women.

As Ari Larissa Heinrich, the translator of Last Words from Montmartre, explained in his LARB review of Notes of a Crocodile last month, this translation comes at a time in which Taiwan is experiencing a massive wave of public support for same-sex marriage rights, and was written at a time (the late 1980s) in which Taiwanese media was simultaneously fascinated and repelled by the idea of queer women, going so far as to out patrons of a lesbian bar on-air. Notes of a Crocodile satirizes this in one of its crocodile chapters, the crocodile in question at one point hiding away “after the Crocodile Club incident, [when] everyone caught Crocodile Fever.” Times have changed: on May 24 of this year, Taiwan’s Constitutional Court ruled that same-sex couples have a right to marry.

But beyond the content of Notes of a Crocodile, there’s something else appealing about the book: how it’s written. Heinrich, in his review, points out that there’s an appealing hyper-literacy to Qiu’s continuous references to other books, movies, and art, as though “we could perhaps describe Qiu Miaojin as a kind of Taiwanese David Foster Wallace.” I’m not entirely convinced by that comparison — there are similarities, yes, both in their sensibilities and, as Henrich writes, in their deaths, but when reading Wallace I’ve always felt a level of remove, a distance between the narrator and myself that’s not always appealing. Qiu’s work knows no such boundaries. These are novels that almost seem to feel too much, to a degree that is almost disturbing, as biography and fiction and language and thought blur, with what seems to be authorial intent, into one.

“I feel uncomfortable reading this,” an acquaintance texted me mid-way through Last Words from Montmartre, after I had eagerly pressed it into his hands upon finishing it for the first time. Qiu’s musings on the nature of love, he explained, were at once beautiful and too accurate, a live wire of uncomfortable truths electric to the touch. Moments of Notes of a Crocodile approach this, flashes of what would become the more mature second novel — and it’s that sense of naked emotion that makes Qiu such a profoundly affecting writer.

What does it mean, then, for a novel to be too truthful, for a work of fiction to point out the occasional ugliness of human nature, of merging with another person? Notes of a Crocodile balances this experience with at times tedious pages devoted to Shui Ling and Xiao Fan, the two women the book’s narrator, nicknamed Lazi, obsesses over. It’s these moments in which it becomes obvious that the author was in her early 20s when she wrote it — how many times do I have to be told about, rather than shown,  Xiao Fan’s feminine appearance and mannerisms? — but at other times, it works, as though Qiu was practicing this particular approach. When Lazi turns 20, she receives a letter from Shui Ling post-breakup, and thinks to herself, “My leaden heart cracked open with sadness, and raging waves submerged the embankment.” This should be melodramatic, but isn’t. Who amongst us hasn’t felt this way after losing their first love? It’s so unselfconscious, so honest, that instead of bordering on the histrionic it instead becomes a real moment of narrative loss and beauty.

That’s not to say the book is entirely doom and gloom. It’s a work that revels in its stylish characters, and again and again, I was struck by what a glamorous movie it would make. Like all good coming-of-age stories, there’s a cast of supporting characters ranging from the quirky to the tragic, and as each struggles alongside Lazi through their own maturation, they’re prone to dramatic statements like the one declaimed by Meng Sheng, the self-destructive lover of a friend of Lazi’s, in a nightclub: “We come from a long line of deviants throughout history all with the same final destination in the celestial order: death.” What hedonism! Another character, a young woman vacillating between dating men and women, takes up yoga as a sexual practice and vows to start up “a learning center with experts who can teach people how to achieve orgasm.” Clothes, also, make frequent appearances, from the aforementioned Xiao Fan’s “brilliant execution of a feminine style” to Meng Shen’s “stately, aristocratic even” suits.

Notes of a Crocodile is not a safe novel, nor is it always successful — it occasionally verges into the florid, and sometimes its constant barrage of allusions feel like a college student attempting to regurgitate their favorite syllabus — but that’s half the pleasure. And it’s something to keep in mind, as we as a country and as a global moment hurtle into ever-more conservative times: perhaps it would be a good idea to take writing tips from reptiles. 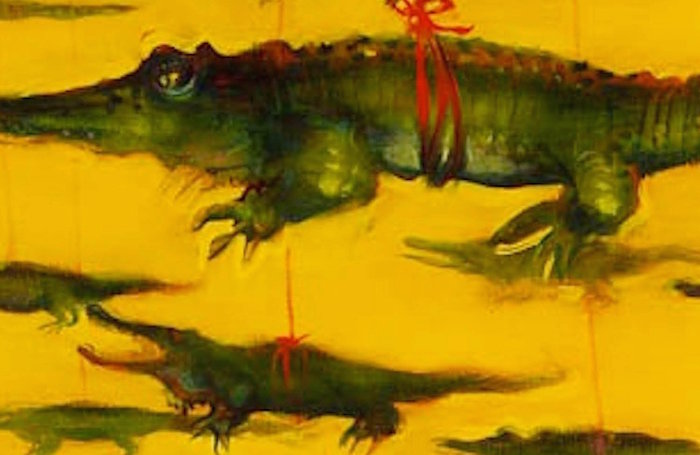