This past New Year, I noticed a lot of writers making resolutions about their writing life. One common resolution was to net a specific number of rejections in a year: 80, 100, 150 — whatever seems manageable. Writers who have done this note that the more they submit, the more likely they are to get published, which makes sense. A rejected piece also brings their names to the attention of editors and may result in useful feedback on how to improve. Most importantly perhaps, writers argue that aiming for so many rejections helps to build a thicker skin; they learn to not take rejections as personal failures, to just move on to the next piece.

John McNally, author of The Promise of Failure, is no stranger to failing, but he’s a huge proponent of rethinking it. He starts his book by sharing a Facebook status he posted, in which he listed all the books he’d written, how long it took him to write each one, whether or not they were published, and how long it took to revise them for publication. The response was phenomenal. Writers were thrilled to finally see the truth about writing failures, rather than a carefully curated litany of authorial successes. His list also showed that one success does not guarantee future successes.

This post was the impetus for McNally’s book, which uses the same conversational style you’d expect when interacting with someone on Facebook. It’s a slim, small volume, and though it’s somewhat meandering, McNally repeatedly turns the idea of failure on its head, providing a welcome new perspective on success for writers at all stages.

Everyone fails or is rejected at some point in their lives. But McNally insists that it’s how you perceive and deal with that failure that matters. It also depends on how you think about your abilities. Do you have what psychologist Carol Dweck has termed “a fixed mindset,” in which you think that your “character, intelligence, and creative ability are static givens which we can’t change in any meaningful way?” Or do you have a growth mindset, which “thrives on challenge and sees failure…as a heartening springboard for growth and for stretching our existing abilities?” To make the most of failure, he argues, we need to cultivate the growth mind set.

While McNally addresses his book to all writers, accepting failure is particularly important for women, who are conditioned by society to think that failing at work means we are failures in life. Instead, women need to sever the link between failure and self, and see it for what it is: an opportunity to learn. As Andi Zeisler writes in We Were Feminists Once, “Equality is not simply elevating women, but also allowing them to fail as spectacularly and often as anyone else.”

So what constitutes failure in writing? McNally’s book suggests two ways of embracing failure: (1) embracing specific failures as a means to future success, and (2) embracing failure as a state of being, regardless of future outcomes.

Those who advocate the first approach (let’s call it failure-as-success) insist that rejection can often lead to later acclaim: maybe your essay gets rejected today but it results in constructive feedback, networking with editors, and publication tomorrow. But with the second approach (­we could just call it failure, I suppose) you need to ignore external factors that are out of your control: including getting published, receiving awards or job offers, getting good reviews and high book sales. Instead of relying on these external motivators, you have to focus on the one thing you can control: the writing itself. Instead of writing because you hope to receive praise in the future, you write because it’s a vocation, because you are compelled to, because you can.

Thus McNally cautions writers, “don’t seek rewards. Let the act of writing be its own reward.” But this is a difficult choice to make: many of us are primed to aim for ­failure-as-success but don’t really know how to accept failure as such. We know intuitively that the writing life is more sustainable if we focus on the process, and if we see it as a craft we must practice regularly. We know that we need to be humble and open about our failures instead of publicly curating a perfect life that suggests writing is a competition. But we often require some motivation to move beyond that – and that motivation ultimately takes the form of publication, putting us squarely in failure-as-success territory.

If we’re not able to fully embrace failure itself, we may begin to ask ourselves: why write if I’m just going to be rejected? Given my mental health-related disability, I often ask myself why I write. Why do I spend my limited time on something at which I may not succeed? Sometimes I feel I neglect my family by writing instead of spending that limited time with them. But I can’t not write. It’s something that’s good for my soul, and it makes my dark periods more bearable. I write because I can. I write because it’s my way to contribute to society given my illness. I write, as Joan Didion said, to find out what I’m thinking.

Indeed, McNally makes clear that writing is built on sacrifice of some sort: “each story you write is probably something you already have sacrificed something important for — time with your children or spouse or partner or friends or pet…” Having made this initial sacrifice, McNally suggests that writers make the most of their writing time and take a personal risk: move beyond your fear of failure to be emotionally honest, to let your life and worldview seep into a book. Consider becoming a genuine “failure,” who writes only for the joy of it. It will make your writing more compelling, and more of an experience for the reader. As he quotes Ray Bradbury: “Jump off the cliff and build your wings on the way down.” 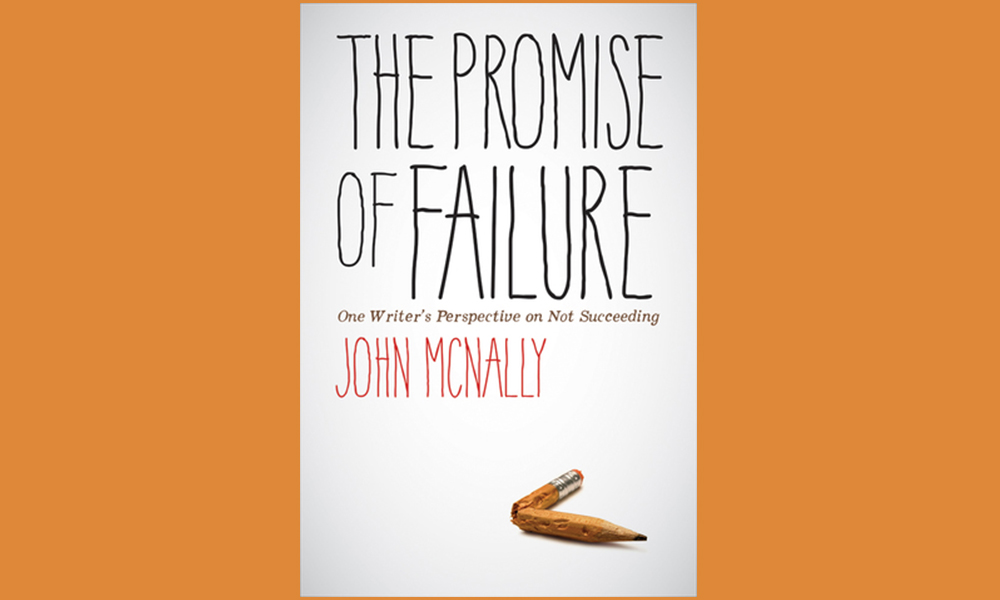