In 2005, the Smithsonian National Museum of American History mounted an exhibit titled “Whatever Happened to Polio?” The Salk vaccine, first available in 1955, all but eradicated the virus which killed thousands of Americans and paralyzed many more — most famously, Franklin D. Roosevelt — during the first half of the 20th century. “All but” is significant, though, as the exhibit highlighted. Despite the introduction in 1963 of the Sabin oral vaccine, making it easy and cheap to immunize large populations, there are still a few hundred cases of the disease each year, primarily in Nigeria, Afghanistan, Pakistan and, most recently, Syria. Global health experts fear that war, mass movement of refugees across borders, and prohibition of vaccination by extremist regimes could cause a renewed spread of polio in the twenty-first century.

In the U.S., there have been no reported cases of polio since 1979, but the virus has made a reappearance of sorts even here. Post-polio syndrome, in which progressive weakness and debilitating pain develop decades after the initial infection, is estimated to affect up to 50 percent of people who’ve ever had the virus. A baby boomer who recovered from polio as a child may initially mistake the aching joints and muscle fatigue of post-polio syndrome for simple aging, unaware that a barely remembered infection could eventually put him or her in a wheelchair.

Gail Caldwell, Pulitzer-prize winning former book critic of the Boston Globe, made the opposite mistake. She’d always had a slight limp, caused by a bout of polio in 1951 when she was six months old. In late middle age, when the limp worsened, and pain in her right hip became so severe she could barely walk without falling, Caldwell assumed she had post-polio syndrome. In her new memoir, New Life, No Instructions, she writes, echoing Faulkner, “I suspect I had known for a while that the past not only wasn’t past, but that it might be getting worse.”

At first, doctors found no other explanation for Caldwell’s symptoms and, since post-polio syndrome is incurable, they prescribed physical therapy, pain killers, and a positive attitude. But after a few years, an x-ray revealed that her infirmity wasn’t due to post-polio syndrome, but to a much more common and treatable condition: degenerative arthritis. After routine recuperation from a total hip replacement, her pain was gone. In fact, during the surgery Caldwell’s orthopedist lengthened her polio-damaged leg five-eighths of an inch so that her life-long limp also disappeared.

Caldwell is the author of two previous memoirs, A Strong West Wind, about her childhood in Texas, and Let’s Take the Long Way Home, about her friendship with the writer Caroline Knapp, who died of lung cancer in 2002. New Life, No Instructions picks up nine years later, just after her hip replacement. Caldwell weaves the story of her recovery,with memories of her childhood, her parents, her friendship with Knapp, her struggle with alcoholism, and an array of pets, lovers, and newspaper cronies.

By describing her misdiagnosis and successful treatment in the first few pages of New Life, No Instructions, Caldwell signals that hers will be no ordinary illness memoir. Most such recollections recount efforts to overcome disease, trauma, or addiction. Sometimes they include a denouement about life after recovery. Caldwell’s memoir is all denouement. We know from the start that the crisis has passed, that she’s healthy, and she acknowledges that wellness is a risky subject for memoir. “High drama doesn’t much lend itself to rehab…” she writes, with characteristic sangfroid. But in New Life, No Instructions Caldwell spins narrative gold from unlikely straw: helpful neighbors, a fluffy white dog, a corrected stride. And in her hands, notwithstanding the nature of her subject, a quiet kind of drama does emerge; her post-operative reassessment of life is a lyrical and wry meditation on memory, identity, and the passage of time.

After surgery, the world looks different to Caldwell — literally. The lengthening, by a fraction-of-an-inch, of her polio-stricken leg adds two inches to her height, altering her visual perspective, as well as her view of herself. The disappearance of the limp allows her to see clearly, for the first time, the extent to which her identity had always been shaped by polio.

The fact of the disease — important but hardly central — had long been incorporated into my shorthand self-description: writer, grew up in Texas, slight limp from polio. Part of the story I’d told myself all my life was that polio had made me a fighter[…]

Caldwell’s parents encouraged her feistiness, her mother by doing hours of leg strengthening exercises with her each day, and her father, by denying there was anything wrong with her leg at all; or, as she recalls “that anything held me back beyond my own failure of will.” In school, since her disability ruled out cheerleading, she was the “brainy” girl, and as a young writer beginning to freelance she had a reputation for brashness. When she told a journalism colleague about her bout with polio he said of her limp: “I always thought it was a swagger.”

Caldwell doesn’t suppose that polio alone formed her, or that her identity is invalidated by a few hours on the operating table. Rather, her surgery inspires a more subtle perturbation:

What do you do when the story changes in midlife? When the tale you’ve told yourself turns out to be a little untrue, just enough to throw the world off-kilter? It’s like leaving the train at the wrong stop: You are still you, but in a new place, there by accident of grace, and you will need your wits about you to proceed.

Though grateful to be free of pain and disability, Caldwell understands that restored health isn’t a reprieve from mortality. The “new place” at which she finds herself is still in her 50s, when, as she writes, “You can see all the corners of the map, […] probably for the first time in life.”

Most helpful to Caldwell as she rethinks both past and future is Tula, the Samoyed puppy she acquired around the time she first experienced the symptoms she mistook for post-polio syndrome. Dogs have little awareness of time, of cause and effect and derailed expectations, and so Tula’s “adjacent drama,” as Caldwell puts it, provides a narrative — as well as therapeutic — counterpoint to her own. Caldwell writes of Tula:

Dogs have a present-tense alacrity that makes short shrift of yesterday’s bad news. They are hard wired to charge forth, to expect good outcomes, and that viewpoint can shape the future as much as it anticipates it. I don’t believe I’d have staggered into this glen of insight and physical change without her.

Dogs also make short shrift of yesterday’s — or tomorrow’s — good news. When Caldwell arrives home after her surgery, Tula is oblivious, of course, to her master’s excellent prognosis. Caldwell writes of Tula’s greeting:

She licked my face — excitedly at first. Then she got a whiff of what I’d been through, and she panicked[…]When I spoke to her or called her name, her ears flattened but she averted her eyes, as though I were a predator, or a wounded human who smelled of blood and trauma.

Caldwell wails, seeing in Tula’s reaction a truth from which her supportive friends had protected her, and which she herself had denied:

I had let strangers carve me up like a grapefruit, and now Tula, witness to this travesty, wanted none of it. For all the friends and flowers and casseroles waiting for me when I got home, I felt like an abandoned waif.

Caldwell enters a brief tailspin of self-pity and renewed mourning: her parents, Knapp, and Tula’s predecessor, Clementine, all had died in the few years before the surgery.

Eventually Tula pulls Caldwell out of the doldrums to which she, at least in part, sent her. However,  that “glen of insight” at which Caldwell arrives, with Tula’s help, is not entirely sunny and free from suffering. Rather, it’s a place where loss, illness, aging, and death are, if not avoidable, at least endurable. This modest assurance brings Caldwell, and her readers, surprisingly generous consolation. Contemplating her grief, particularly over the death of Caroline Knapp, Caldwell writes, “I sensed I had not just been pummeled by death but reshaped by it, poised now at some crucial junction between darkness and endurance, which is the realist’s version of hope.”

It takes enormous skill to extoll the value of endurance — aided by a sled dog, no less — without platitudes, or any trace of the maudlin. But by the end of New Life, No Instructions Caldwell has convinced us that even on two sound legs, simply pressing forward is a hard-earned victory, and that a healthy body can speak as eloquently as a wounded one. 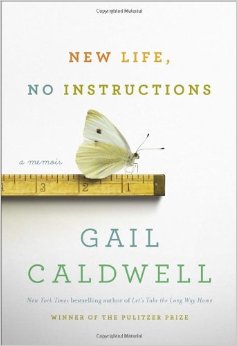