About halfway through “Remembrance,” the first episode of the new Star Trek: Picard series, Jean-Luc Picard visits an archive. Inside the archive is a veritable fan museum, containing Worf’s bat’leth, models of the USS Enterprise, and a large, colorful banner with “Captain Picard Day” scrawled on it in childish lettering. The banner is from “The Pegasus,” a forgettable episode in the last season of Star Trek: The Next Generation that aired in 1994. Forgettable, unless, like many elder Millennials and younger Gen-Xers, you happened to have been roughly the age of the children who had scrawled that sign when you watched it. When Admiral Blackwell overhears the “Captain Picard Day” celebration in the background of his call, he banters with Picard:

“I’m sure you are. Starfleet out.”

And for a generation of nerdy American children raised on the Space Shuttle, the ISS, and the Hubble Telescope, he was. The choice to revisit his character leans heavily on the millennial Trek viewer’s nostalgia for Jean-Luc Picard. There is no doubt that this is a show by and for fans of the franchise. Prudently, however, it chooses not to anchor our sympathies for its central character in fan sensibilities alone. “Remembrance” asks us to remember the Star Trek of the late 80s and early 90s, yes, but it also ties Picard to deeper American cultural narratives of World War II and Homer’s Odyssey. The combination makes for a potent mix of nostalgia and righteousness, though not one without its narrative — and ethical — pitfalls.

Picard, played by the 79-year-old Patrick Stewart, never shades into a millennial parent figure — there is no danger of “okay, boomer,” here. Instead, the premiere places him squarely in the safer narrative of the Greatest Generation and the Second World War. Stewart is slightly too young for this allegory to map onto him perfectly, but the episode makes it work, opening with Bing Crosby’s 1946 “Blue Skies.” “Blue Skies” has a canonical role in the Trek universe and functions as a tip-off to fans that the series will revolve around the now-dead character of Data, the android who sung it in the final Next Generation film, Nemesis (2002). Simultaneously, however, the song draws our attention to the 1940s, the time our “role model” represents.

“Remembrance” doesn’t settle for leaving subtext as subtext — its very title, after all, announces that the episode is an exercise in nostalgic memory. Picard explicitly references WWII and the heroism of the Greatest Generation when giving an interview in the beginning of the episode. He compares the Romulan refugee rescue effort to Dunkirk, then tears into the reporter for daring to question him too deeply about his past, biting out, “And you, my dear, you have no idea what Dunkirk is, do you? You’re a stranger to history, you’re a stranger to war.” Dunkirk is a movie of “patriotic cyphers” that “functioned as a tribute to the virtue-inspiring power of war,” as Richard Brody put it in The New Yorker. It was nominated for Best Picture in 2017; it is in every way an Oscar Movie. Picard relies on that recent adaptation to jog the viewer’s memory, rather than any deep knowledge of military history. The viewer, identifying with Picard both as “role model” and the episode’s primary protagonist, hears “Dunkirk” and calls up righteous American heroism. By appealing to cheap nostalgia for WWII, the allegory makes an American viewer, in this particularly grim political moment, feel good about themselves.

To get the viewer to that feel-good moment, the show chooses to paint the female interviewer — one of only two black characters in the episode and the only one to live to its end — as a galactic xenophobe, as she remarks that rescuing millions of Romulan refugees was a politically contested, expensive choice. Picard responds with this exchange:

Picard: “But the Federation understood there were millions of lives at stake.”

This is the Picard of The Next Generation, the one who embodied the optimistic, yet fundamentally imperialist vision of Gene Roddenberry’s post-WWII economic expansion and NASA’s lunar plaque, “We come in peace for all mankind.” The franchise has always wanted, to its great and lasting credit, to believe in a vision of all mankind, one that renders the Other — be it the Borg, the Romulan, the Klingon, or the android — a part of that expansive definition of mankind. “Remembrance” does the racial justice legacy of the show a disservice in how it cast the scene. Further, what 20 years ago was a visionary change — the show’s voiceover shifted from the original series, “where no man has gone before,” to “where no one has gone before” — is no longer enough for a radical statement about who deserves human rights. It is not the artistic or ethical obligation of a television show to provide such a statement, of course. But Trek is, historically, one that has tried.

The problem has always been that in Trek’s post-Enlightenment, European figuration of human rights, it argues that those worthy of being allowed into the circle — of being members of the United Federation of Planets, if you will — must iterate fundamentally towards the human, when the show’s archetypical “human” is a white, male, military veteran that owns an estate in France, when “human” looks very much like our retired Admiral Jean-Luc Picard. Data, the android whose backstory forms the connective tissue of Picard, spent seven seasons and four feature films trying to become more human. The stakes of his humanity are high. In “The Measure of a Man,” Starfleet holds a trial on whether or not Data may be experimented on as Starfleet property, culminating in one of Picard’s more memorable speeches:

Your honor, the courtroom is a crucible; in it, we burn away irrelevancies until we are left with a purer product: the truth, for all time. Now sooner or later, this man [Commander Maddox] — or others like him — will succeed in replicating Commander Data. The decision you reach here today will determine how we will regard this creation of our genius. It will reveal the kind of people we are; what he is destined to be. It will reach far beyond this courtroom and this one android. It could significantly redefine the boundaries of personal liberty and freedom: expanding them for some, savagely curtailing them for others. Are you prepared to condemn him [Commander Data] — and all who will come after him — to servitude and slavery? Your honor, Starfleet was founded to seek out new life: well, there it sits! Waiting.

The title of the episode circles back to the central problem with its conceit. To gain freedom, the android must fit the “measure of a man.” Data’s humanity throughout the episode is figured in terms of his ability to understand art, literature, and sentiment — in particular, Shakespeare’s sonnets. To escape slavery, understand Shakespeare: this is the definition of human rights which the United Nations and the United Federation of Planets leave us. It is better than nothing, but today, with migrant children dying on the US-Mexico border because the American president sees them as “animals,” it is not enough.

Trek, and in particular The Next Generation, has always maintained a deep investment in canonical European arts and literature, or what is often problematically termed “high culture.” While sometimes sliding into the corny or the colonial, this willingness to pull from Shakespeare and Melville at will remains one of Trek’s great strengths. In that tradition of Trek, “Remembrance” draws its deepest cultural parallels with Homer. Like Odysseus, Picard has returned to the family estate after a lifetime at sea (i.e. space). Yet home is unrecognizable to him and he is unrecognizable to it: like Odysseus’ dog Argos, Picard’s dog is the only one who seems to be able to recognize him fully. And, like Odysseus, Picard will leave this home before long, heading back into space. Odysseus only got one night; Picard has had 14 years. But they have all happened off-screen; to the viewer, it is as if he is home for the space of this first episode, then gone again.

“Remembrance” makes much of Picard’s age, using it to mark the pain of this return to his now-aged character — the Greek algia of nostalgia — to the viewer. He cannot make it up stairs without stumbling. He pauses getting out of bed in the morning. His voice quavers with age and indignation. We see long shots of his hands, with their visible veins and liver spots. He orders decaf tea. It hurts to see the great Jean-Luc Picard in this way, when he could have lived immortal in my generation’s memory. But to crib from the French philosopher Barbara Cassin, “Nostalgia is what makes one prefer going home, even if it means finding there a time that passes by, death — and worse, old age — rather than immortality.” Or, to put it differently — the danger of familiar narratives is that they are so difficult to resist, even as they are (pleasurably) painful.

In Trek the narrative necessity of a “universal translator” flattens everyone’s speech into English. Without the translator, every episode of Trek would be covered by Arrival (2016). Trek’s English is what  Cassincalls “globish.” In reading Hannah Arendt’s accounts of being a German-Jewish refugee in the US, Cassin argues that host nations ask the “obedient refugee” to speak this “globish” English, a language in which one may only speak in cliché. This is the language that deals in the clichéd nostalgia that makes us enjoy the outfits in The Marvelous Mrs. Maisel without asking what would have happened to Suzy had she been caught crossdressing, or how Picard’s whiteness is complicit in our willingness accept him as a spokesman for righteousness over the black reporter.

One of the more jarring moments in the episode comes when Picard speaks to his dog in his supposedly native French. His accent is terrible and he is instantaneously identifiable as British by any francophone listener. Yet we are asked to believe he is here, on his father’s land, or perhaps also the fatherland, speaking his mother tongue. That sudden break in the show’s smooth Englishness, when it goes out of its way to mark Picard’s place on his land speaking his language, legitimizes him as one who can speak for others and ties him to a pastoral, European “homeland” for the white American viewer. But that legitimization comes at a cost. It establishes him as a subject in the vernacular of ethno-nationalism, where the mother tongue and the fatherland exist in a naturalistic pair.

In “Remembrance,” Picard asks us to return to Ithaca if only to leave it again, so soon, next week. Whether the show will grapple with the dangers of its particular nostalgias, I cannot say. But there is immense possibility here, most centrally in the premiere’s hints, via its “synthetic,” android plotline with shades of Philip K. Dick’s Do Androids Dream of Electric Sheep, to finally confront Trek’s definition of the “human” and rewrite it in such a way that does not require those radically different from us to become like us, in order to be seen as persons. 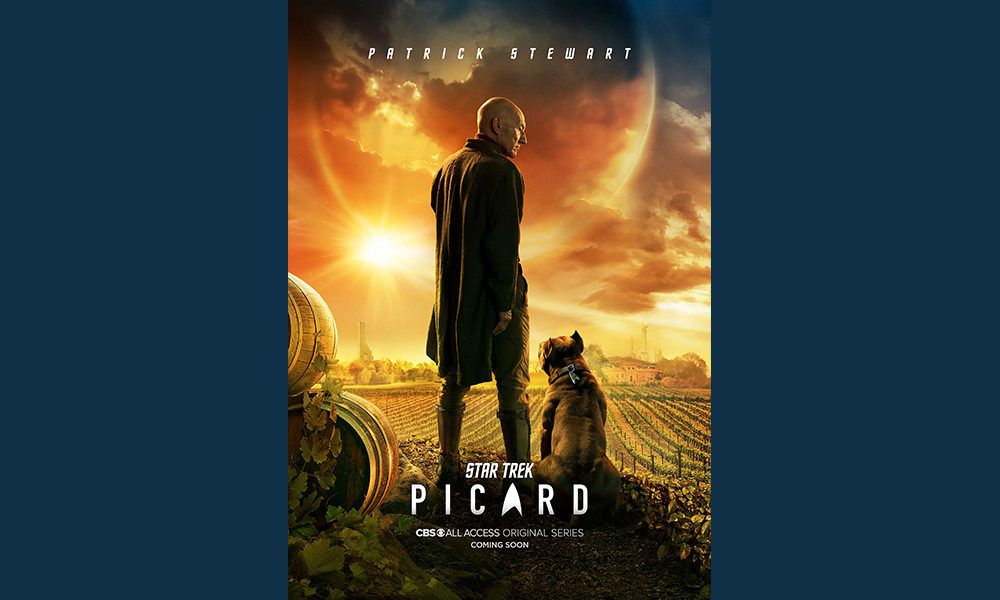