In the 1960s, Bernard Levinson, a South African psychiatrist, staged a famous — and famously unrepeatable — experiment. During surgery under ether anesthesia, patients were read a dramatic script. “I don’t like the patient’s color,” their surgeons said at a predetermined moment. “Much too blue.” Shortly after surgery, Levinson hypnotized and interviewed the patients. He found that many could quote their surgeons’ words. Others became profoundly agitated during questioning. The implication was alarming: somehow they had been aware.

Anesthesia: The Gift of Oblivion and the Mystery of Consciousness, a new book by Australian journalist Kate Cole-Adams, takes the “folkloric status” of this experiment as a departure point. If you’ve ever gone under — or even if you haven’t — the book will horrify you. Did you know, for example, that it’s impossible, even for veteran anesthesiologists, to tell whether you’re fully unconscious during surgery? That many patients can later, under hypnosis, recall pain and uncomfortable sensations? That some small percentage of patients are actually awake, though paralyzed?

Our horror, though, isn’t what Cole-Adams is after — not primarily, anyway. Instead, Anesthesia plunges into the psychic murk of that insensate state to grapple with deeper questions about consciousness itself. “[T]he you that wakes in the recovery room,” Cole-Adams writes, “is in some critical ways not the ‘you’ that was lying open on the operating table having the experience of being operated on. The self has been interrupted.” Part science journalism, part memoir, Anesthesia lucidly explores this theme. While, at times, the book loses its balance, Cole-Adams gives us something valuable: a humanistic meditation on pain and our will to forgetting.

Anesthesia is a practice of remembering. Cole-Adams, we learn, is traveling inexorably toward a spinal surgery and an anesthetic experience of her own. In diaristic passages, she mediates the medical past through years of personal history — romantic partners, depressive episodes, youthful mistakes, family illness and death — with a sublime attention to detail and a disregard for linearity that would chasten even the Nabokov of Speak, Memory. It’s her encounter with Rachel Benmayor, a woman who was awake and in agony for a Caesarian birth — followed by “years of nightmares, panic attacks and psychiatric therapy” — that sparks her own horror at the prospect of “anesthetic awareness.” Thus launches an 18-year obsession.

Cole-Adams is good on popular history. “Most of today’s routine operations were impossible” before the mid-19th century, Cole-Adams reflects, “and even when they weren’t, many patients chose death in preference.” The advent of ether anesthetics arrived in 1846, before an astonished audience in a glass-domed operating theater at Massachusetts General Hospital. An “opportunistic” surgeon, stealing another’s failed idea, painlessly removed a patient’s tumor under gas. Ether made the impossible possible. Less well known is that this inaugural patient remembered his operation. “[P]eople have been waking during surgery for as long as other people have been putting them to sleep,” Cole-Adams writes.

Anesthetic progress since then has been a matter of doctors getting better at making us unconscious and keeping us that way — without killing us or leaving us permanently befogged when we resurface. Most of today’s “cocktails” contain a hypnotic — like ketamine — to knock us out, an analgesic to numb our pain, and a muscle blocker to keep us still. The paralyzing agent, only available since the 1940s, has been the most troublesome where modern questions of awareness are concerned. It makes operating safer and more efficient. But if patients are awake and in pain, they have no way to say so.

Such was the consideration that spurred Levinson’s experiment. Flawed as it was, it activated a shadowy corner of medical research bent on reducing intraoperative awareness. There’s a so-called bispectral index, or BIS monitor, with a secret proprietary algorithm that monitors patients’ brain activity. We learn of the bizarre “forearm isolation” technique, which blocks anesthetic drugs from the blood in an anesthetized patient’s hand so they can signal in response to researchers’ questions — and signal they do. There’s a bunch of brain science that I don’t get, but then neither does Cole-Adams, as she readily admits. The point is that the circuitry up there keeps firing.

What is consciousness then? This is where things get complicated. Central to Anesthesia is the gulf between the way we talk about the psychiatric kind of consciousness and the neurological kind. (It’s this gulf that Oliver Sacks, the book’s obvious forebear, made a career of bridging.) When you really look, the divide between the two grows fuzzy. If we can learn and react under anesthesia, are we really, appreciably unconscious? And if we are, how is it so different from ordinary, wakeful unconsciousness, or what Cole-Adams (in a Rumsfeldian turn) calls “the things we don’t know we know”?

Cole-Adams answers these questions only obliquely — to the extent they’re answerable at all. She has written herself into the narrative to reckon with them, a choice she represents as a problem of the “I”: “to take this vertical pronoun and lay it on the psychoanalyst’s couch, or perhaps the surgeon’s trolley (the pronoun now prone, horizontal) — seemed improper: self-regarding.” And yet, she says, something below the level of consciousness — the unconscious self — kept getting in her way, insisting on its inclusion.

It can get in the reader’s way, too. With its assiduous literature review, its bias toward the accounts of medical experts, Anesthesia sometimes feels, to its detriment, like a very charming medical text — or a curiously well-researched memoir. But it lacks the philosophical discussion it promises at its outset. Cole-Adams flirts with the intersection of Freudian psychoanalysis and neurology. She skewers the “reductive dualism of much Western scientific thought” that disallows in-between states of consciousness. She rubs shoulders with Buddhist practices of confronting pain. She’s fascinated by the possibilities of hypnosis (“Memory is weird”), but she personally resists it (“I lasted six sessions”). The sum feels insufficient.

Rich characterization might have filled this gap. Instead, the book mostly gives us expert interviews. Even Benmayor, for all her trauma and healing, emerges as little more than a source. This is frustrating, because we see glimpses of Cole-Adams’s talent in her treatment of family. On her mother’s stoic telling of being on her own after her father’s death, she writes: “This is what my mother brought with her to the operating theater. It is what she brought with her all of her life. A clear-eyed appraisal of her situation and options. A willingness to act.” It’s the stuff of human drama. I wish the book contained much more of it.

Cole-Adams is also a novelist, after all. Her first book, Walking to the Moon (2008), was a fiction about coma and paralysis — those other in-between conditions. To Anesthesia she brings lush gifts of description, a poetry of the body and mind. The chest and belly are “fortified cities.” The liver is a “dark sump.” Consciousness is a “shimmering edifice.” Christ on a crucifix (that early, agonized surgery patient) is a “limp passenger.”

And it’s here, in these more intimate passages and descriptions, that the rubber meets the road, philosophy-wise. One reason anesthesia is so deadly frightening is that it is so near to death. What we call the “self” — that old vertical pronoun, “I” — exists only in our mind, as the Buddhists will tell us. And it’s scary to think of our body without it. Even scarier is to think that some primitive lizard non-self is operating and admitting information when the self we know is absent. That, of course, is how Freud rebuked Victorian knowledge and captivated the denizens of the 20th century: by declaring that most of our mental processes are unconscious in the first place. We’ve been seeking a way to confront them since then.

Cole-Adams’s conclusions are gentler than those of psychoanalysis, and more vernacular. Her “journey back to self” entails “exercise, meditation, counseling, writing; the simple passing of time.” Doctors should be “more attuned to the intense vulnerability of their patients” emerging from anesthesia. Patients should try to be “present” for their surgeries. Pre-operative self-hypnosis, it turns out, can ease our experience and even help us reduce blood loss during operations. In short, “we as patients might do well to change the way we think, or fail to think, about ourselves under anesthesia.”

Maybe we’d do well to change the way we think of ourselves altogether. Taken more broadly, anesthesia — and Anesthesia — serves as an apt metaphor for our cultural impulse toward numbness. In the Internet age, we’re possessed by myriad distractions. We’re addicted to our phones; we’re drawn compulsively to our work; we’ve got a pharmacopoeia at our fingertips. Yet, despite our best efforts, uncomfortable forms of consciousness keep prodding us. Cole-Adams acknowledges this phenomenon in herself: “the process of writing this book functioned in my life both as an anesthetic and as the means to wake myself up.” Awake to the eventualities of suffering and death, Anesthesia suggests, we might treat ourselves — and each other — more kindly. 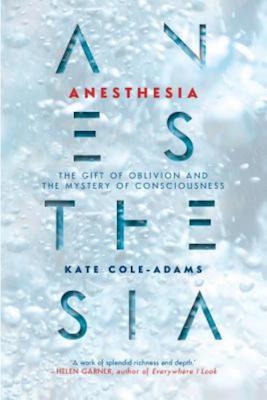