It’s a tricky thing to set about writing a series of essays on the act of essay-writing itself, as Brian Dillon does in his new book, Essayism: On Form, Feeling, and Nonfiction. Can the writer of this project possibly escape a kind of self-conscious meta-commentary on his own work? In studying the work of great essayists — Montaigne, Woolf, Benjamin, Hardwick, Sontag, Connolly, to name a few — does he indulge in that urge to embody everything he marks as good in these authors and avoid what he marks as trite, or heavy-handed? Or, instead, is he liberated? Being a kind of arbiter himself (or a convincing analyst, maybe), is he free from having to play to the strengths and weaknesses he explores in others?

Dillon’s Essayism transcends these questions. Dillon writes in so meditative and yet so astute a style that his insights on the work of others are held as if in suspension — not for him merely to dismiss or revere, but for him to gaze up at, for him to work through with a kind of serpentine, recursive form. Early on in this slim, incisive volume, Dillon notices the way essays themselves occupy a type of liminal space: Dillon is attracted to “the sense of a genre that is suspended between impulses to hazard or adventure and to achieved form, aesthetic integrity.” But Dillon, ever sage, knows the essay must provide pleasure, too. He refers the reader to Woolf’s “The Modern Essay,” in which she argues: “The principle which controls [the essay] is simply that it should give pleasure … Everything in an essay must be subdued to that end.”

By Dillon’s analysis what we have is a genre bound by a certain tentativeness on the one hand and the urge toward structure on the other. Also, a genre that aims to cast a spell upon its reader — a genre that, as Adorno writes in “The Essay as Form,” aims to “make the transitory eternal.” What Dillon does in this book is exactly that. He catches the flashpoints in a given author’s prose — moments of exquisite style, insight, tenderness, or frustration (Connelly’s The Unquiet Grave has all of these, and Dillon’s very game readings of this text are a treat) — and examines them to the delight of his reader. Through sections titled “On Origins,” “On Lists,” “On Dispersal,” and “On Style,” we learn that the essay, at its best, is self-aware, but not too tidy. It is cutting, perhaps astringent, and crucially — for Dillon in particular — it is consolatory.

Dillon’s close readings are especially sharp. The quiet brilliance of Hardwick’s syntax (“But isn’t there something peculiar about the placing of that first comma?” Dillon asks entreatingly)  is made irradiate in Dillon’s prose. The woefully understudied Maeve Brennan sparkles with a kind of misanthropic wit under Dillon’s review. Schlegel’s thoughts on the mechanism of wit, easily overlooked, become an exploration on “the art of combining disparate things.” As Woolf dictates, Dillon’s close analyses please the reader. His winding entries and exits from the texts of Barthes, Sontag, Derrida, Perec, cast an ataractic spell. Even when he is less specific, Dillon treats each of his essaying forbears with equal poetic assiduousness.

And yet Dillon writes of himself, too: his melancholia, his suicidal tendencies, his profession. He writes of his own writing, of reading, of losing and finding (maybe) his “I.” He writes on style, over and over again:

Pushed to say what I value, what I love, in essays and essayists, I sometimes think it is nothing but style. In fact all the pages that follow, all the fragments (including a fragment on fragments) amount to nothing but variations on this message: dear essayist, I like your style. I am it seems stupidly, ruinously susceptible to a certain artifice at the levels of structure, syntax, and sound — sometimes it seems that is all there is worth attending to, worth aspiring to also.

It’s a (potentially ruinous) partiality to which any writer, even any reader, might relate. From supreme stylists like Nabokov, to Gass, to Woolf: what does one want more than to fix the algorithms of their prose, despite their ceaseless — and constitutive — slipping from fixedness? In these instances Dillon becomes for the reader a comrade in (literary) idolatry.

When speaking of himself, Dillon’s own style is consistently self-effacing. He writes of the clichéd intimacy between writing and depression, which is “…Even more predictable when the melancholic in question is a man in middle age, suddenly thrust upon the resources he has been perhaps, overestimating for some time.” His book, of course, is a testament that disproves this overestimation. Dillon’s style allows these forays into the autobiographical to feel not at all like self-indulgent digressions, and more like the information needed in order for Dillon’s work to achieve its precise iridescence.

And, after all, it is iridescence — an ever-shifting refraction — that Dillon wants in his work. This is clear in the way Dillon woos his readers into Essayism’s coherence, or incoherence: he playfully asks, “shall we take dust as the founding metaphor by which we broach the unruly topic of the essay?” The answer is clear. Early in Essayism Dillon writes that, like dust itself, “the venerable genre of the essay has a sense of constant dispersal and coalescence.” Much later, in an autobiographical section, Dillon writes that one’s self resembles “a cloud of dust […] that seems at certain moments to cohere, to take a shape, but will fly apart again without warning in the wind.” Dillon’s point, subtly and profoundly made, is that the essay and the self are not just similar, they are coincident: both are cyclically diffuse and united. The form of the essay is so deep within him, one a near facsimile of the other, that to write of the essay is to write of the self.

Or, since Dillon’s book continues to weave new threads (even after one has put it down), maybe it is the essay’s sense of dispersal that allows the I to disperse within it. This sounds a little precious, but Dillon puts it elegantly:

The essayistic or essaying subject turns out to be sleepy and dispersed, liable to fall into a swoon, forget itself and wake again hardly knowing what or who it is. The “I” travels out from the seat of consciousness and dissipates itself at the extremities.

By its very nature, the essay gives one the room to forget the mediating role of the ego and to defront, to push into, the margins of the self.

Even given these lofty meditations and Dillon’s studies of the essaying heavyweights, Essayism is written with a light touch. But it is not exactly playful: It lacks the flair of Connolly’s Unquiet Grave and the crackle found in much of Sontag’s prose. Instead it taps into the concentrated intimacy of Hardwick’s essayistic novel Sleepless Nights — and even, at times, takes on the haunting aura of Benjamin’s Reflections. Anne Carson’s “Short Talks” surely influenced the book’s chapter-title format, and Dillon’s probing, convivial eye allows him to navigate these talks like a somber, but equally charming, Baudelaire. In other words, is a work that is delightfully (and knowingly) suspended between its subjects. And yet it is grounded, too, in such a way that it can still sprawl outward, into the edges of self and form, to become its own distinct achievement. 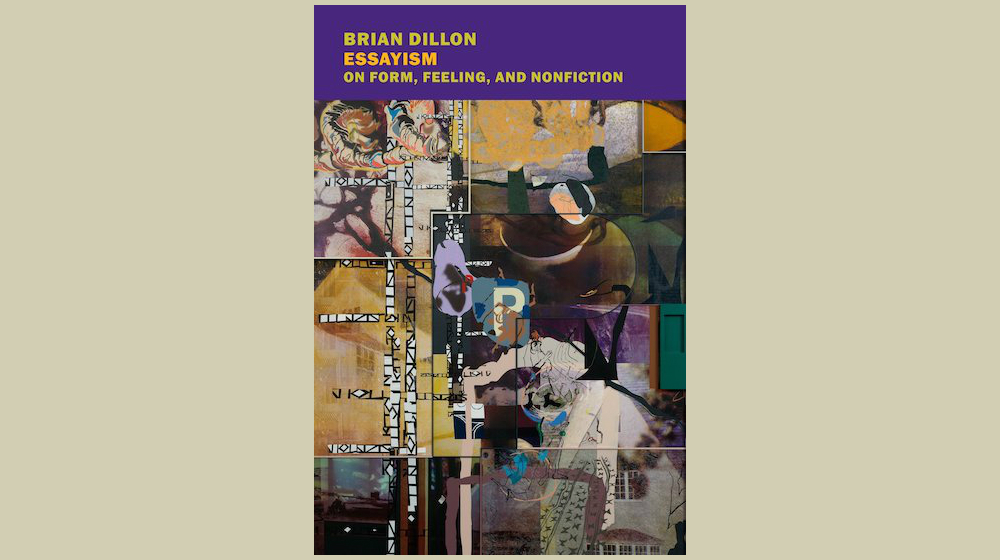