Katherine Verdery, a distinguished anthropologist specializing in 20th-century Romanian culture, has written a memoir based on her Securitate surveillance files. In a memoir, we usually deliver our own versions of our lives. Here, two versions of Verdery’s life are presented: one as seen by the author, the other as seen by the secret service reports. One could say that My Life as a Spy: Investigations in a Secret Police File is a Rashomon-like product of collective authorship. Indeed, the protagonist’s personality splits into many streams. While Verdery’s version — “Kathy” — has a certain unity and cohesiveness, the Securitate’s versions are multiple. At different times in the 1970s and ’80s, the security forces saw her as a “military spy,” a “Hungarian irredentist,” a “gatherer of socio-political information,” and a “friend of dissidents.” These multiple versions of the woman known to the world as “Katherine Verdery” appear in the Securitate files under various pseudonyms: “Vera,” “Vanessa,” “Viky,” “Valy,” “Kora,” “Kitty,” “Katy,” “Vadu,” “Verona”…

We are usually pleased to be reproduced in pictures, as long as the reflection confirms our view of ourselves. But when the depiction differs radically from our sense of self, we may be seized by horror. Think of Oedipus gazing at his reflection and seeing the eyes of a patricide, or Hermann in Nabokov’s Despair realizing that his doppelganger looked, in fact, nothing like him. Then again, someone else’s perspective may also afford us a brief respite from the solipsistic prison of “I.” As Verdery puts it in the first pages of My Life as A Spy, “There’s nothing like reading your secret police file to make you wonder who you really are.”

Her reading of the file produced a sharp cognitive dissonance between the “good, straightforward person” she thought she was and the “spy” and “enemy” the Securitate assumed her to be. The sensation was uncanny, in the Freudian sense: “nothing new or foreign, but something familiar that has been repressed.” Even when we try to be “good,” we still suspect the existence of our Id, of a Mr. Hyde lurking inside us, a composite of the repressed impulses we are ashamed to admit. The reading of a secret police file invokes, from the depths of the subconscious, this very suspicion. What if we actually are spies? What if they see the true us?

Once — I was 15, living in the Soviet Union — an article about me appeared in a newspaper of the League of Young Communists. I read with innocent eyes: my full name was not listed, and I had no warning that it might be about me. After the first few paragraphs, I began to see parallels between myself and the evil creature being described. Slowly, it dawned on me: I was the protagonist.

I have difficulty remembering what these three columns of words actually contained; I must have repressed it. But I understood that the author had her own version of who I was. It was my first serious experience of being seen through the eyes of another, and what the other saw was evil. I remember the deep feeling of shame over that other “me” being exposed to the whole country. These two versions — the vague, childish “me” and the ugly evil one — seemed irreconcilable.

A child of socialism, I could never fully admit to myself that a Soviet newspaper would print a lie. I had to find a way to merge the two versions into a single vision of myself. I had to continue existing, had to reconcile myself with that ugly “me” lurking somewhere in my soul, hiding behind that familiar face in the mirror. I found only one way (maybe not the best) to bring together my two selves. I told myself, in the words of Dostoevsky: “I must understand that I am the worst of all people. I am to blame for everyone and for all things.” This affirmation allowed me to be able to feel like a single self again, albeit a somewhat different self from the one I had been, but still not the total stranger that had emerged from the newspaper.

“Our own voice seems totally strange to us,” wrote the Romanian poet Lucian Blaga, “when we hear it the way others hear it. When we listen to a recording of our voice, we do not recognize it. Wouldn’t the same happen with our soul? If we could ‘encounter’ it, our soul would seem so alien to us that we would not even stop to look at it.” I am a stranger to myself. I am an other, and that uncanny feeling will never leave me.

Verdery’s sense of self, she writes, was further unmoored by learning about the kind of influence the Securitate, through its agents and informers, had tried to exercise on her work on international issues, such as Hungarian-Romanian relations in Transylvania. Had she formed her opinions independently, or had she been manipulated into acquiring them? She began to see herself as a potential Securitate puppet, a marionette with strings pulled by an invisible master. As an anthropologist, Verdery had tried to learn as much as she could about a place in order to describe it. But what was the value of her analysis, she asks, if at that time, she could not see a whole hidden layer of reality: the activity of the informers, the constant surveillance, the files kept on her and on the people she knew?

A friend of Verdery’s called the Securitate’s methods “schizophrenogenic.” What they induced is more reminiscent of a dissociative identity disorder: a split from one’s own identity, usually as a result of a severe trauma. Once recruited, the informer received a pseudonym. In a report, the informer often spoke of him- or herself in the third person, as the “sursa” (“source”). In rhetoric, the substitution of the third person for the first is known as “illeism.” It is supposed to provide an illusion of objectivity and humility (a famous example is Caesar’s Gallic Wars).  Modern neuroscience believes that thinking of oneself in the third person can help relieve emotional pain and make an embarrassing situation less unpleasant. Verdery advances a hypothesis that being constantly double-faced (friendly to the object of surveillance, yet snooping and reporting on it at the same time) would have led the informer to develop “tremendous stress and tension.” Was illeism, perhaps, a method of relieving this shameful stress, a method of distancing oneself from oneself? The surveilled world becomes a gigantic theater, where the actors are estranged from themselves, the marionettes unaware of their strings.

Yet it was not just terror and blackmail that manipulated this vulnerable universe of splits and doubles. It was also eros — the eros of the Securitate. Ioan Culianu, a Romanian historian mysteriously assassinated in 1991, wrote in reference to Giordano Bruno’s ideas: “magic is a means of control over the individual and the masses based on a deep knowledge of personal and collective erotic impulses.” One of the most disturbing parts of Verdery’s book is the last segment, where she confronts the Securitate agents formerly responsible for her surveillance. They want her to see them just as “nice guys trying to keep Romania safe.” They say they “only wanted her to like Romania.” She notices their “warm, friendly eyes.” After a meeting, she has the feeling that she made a “special new friend.” With a touch of horror, she realizes that she, in fact, has just been recruited.

In the small reading room of the National Council for the Study of Securitate Archives in Bucharest one can read one’s file, or a file that had been kept on a member of one’s family. This was made possible by Ticu Dumitrescu, whose portrait hangs on the wall. Dumitrescu, former political prisoner and later a member of parliament, initiated the law guaranteeing the right of each Romanian citizen to gain access to their files.

Each file is a drab grey thing emblazoned with the coat of arms of the Socialist Republic of Romania. The notes inside are partly typed, partly handwritten. I have not seen so many handwritten pages for many years. They look like the letters we used to send each other, the letters I remember from my childhood. Each handwritten note bears the stamp of the person that had jotted it down. Some are sloppy, some barely readable, some meticulous. All of them undeniably individual. All of them written by a human being in full knowledge of what he or she was doing.

I came to that reading room to read the file the Securitate kept on Mircea Eliade, whom they surveilled in emigration for 40 years. It seems that their attitude to him gradually changed along with the changes in the service itself. They first saw him as a dangerous and hostile “legionary” (that is, a supporter of the fascist Legion of the Archangel Michael, or Iron Guard). In Ceausescu’s times, however, they began to make reconciliatory efforts to bring him back into the country or at least to prevent his cooperation with politically active émigré dissidents. Morally complex figures interest me. I never looked for heroes. Perhaps I still harbor a shadow of a doubt about my own morality.

On the cover of Katherine Verdery’s book we see an intimate picture of her, secretly captured by the Securitate: a young woman in her underwear, making the bed in her hotel room. The scene was not meant for the Securitate agents’ eyes, yet they saw it. Now we are seeing what they saw. Verdery had arrived in Romania as a graduate student in order to write about that country. At the same time, the secret service kept writing about her. And now the former “object” has written a book about the Securitate’s “reading” of her, reversing the observer-observed relationship yet again.

In my late teens, I resolved to become a writer. I didn’t make the decision right after encountering that strange version of myself in newspaper, but the experience of seeing myself through hostile eyes was certainly formative. I wanted to write instead of being written about. Now I observe. I determine the text, offering my interpretation of events. Still, most of us who observe and write have, in our heart of hearts, a nagging sense of guilt. It is the guilt of using human beings as objects of our inquiry. Verdery asks, “When I read in the file that I ‘exploit people for informative purposes,’ can I deny that anthropologists often do just that, as Securitate officers do?” That sense of perspective makes My Life as a Spy especially poignant. 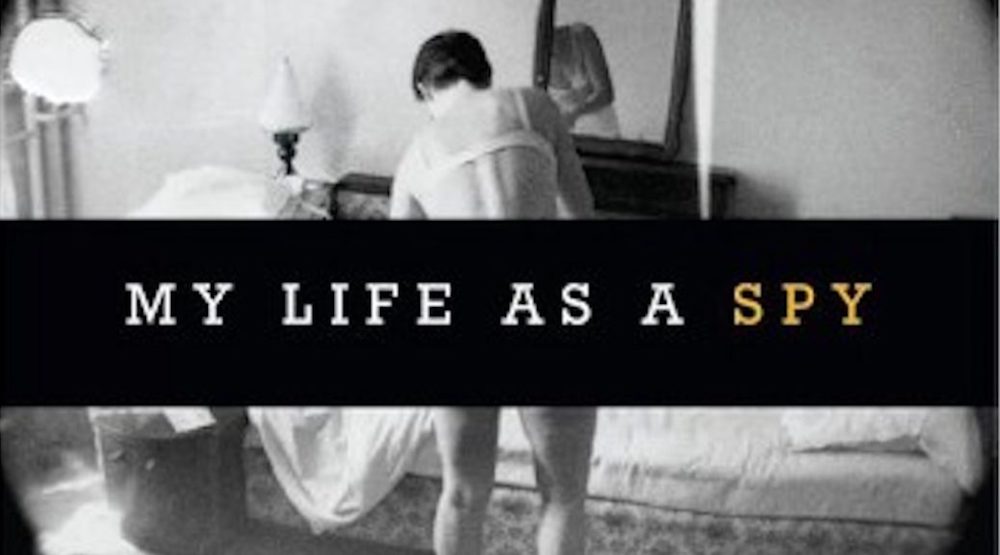