Be yourself; fake it ‘til you make it. Never give up; quit while you’re ahead. Rise and grind; treat yo’ self. In world full of contradictory platitudes, how does one figure out what to do, how to excel, who to become? When should one push herself for once, and when learn to take it easy already?

Anelise Chen’s semi-autobiographical debut novel, So Many Olympic Exertions, takes on these questions with sly aplomb through a cheeky hybrid form. On the plot level, the story’s fairly simple: Athena Chen, a once-competitive high school swimmer turned doctoral candidate in American Studies at New York University, starts swimming again for exercise and procrastination while struggling to write her dissertation. Athena struggles so much that the school cuts off her funding, forcing her to return to her parents’ home in Los Angeles, where she continues to swim and procrastinate.

But this straightforward, nondescript life trajectory is complicated by the suicide of Athena’s ex-boyfriend from college. Though the event doesn’t change Athena’s life much on the outside, inwardly she is wracked by with guilt, wonder, and most of all, confusion. Athena starts to constantly ruminate about life and its meaning. This existential inquiry quickly blurs with Athena’s ruminations about her dissertation on sports, which tries to dissect the psychology of champions — the unrelenting drive, the humiliations of loss, the constant striving, the dire need for approval.

In this way the novel is also a philosophical text, as well as a meta-self-help book. Athena constantly receives advice from the well-meaning people around her — for example, to take up swimming again to alleviate her anxiety — and tests their suggestions out on herself. Yet even a simple swim is never quite so simple. “When I’m in water, I can only think of the million other things I should be doing instead of floating,” Athena admits. And since she no longer has the goal of competition to prepare for, Athena’s unsure how to swim, exactly, though she tries to adjust:

My new philosophy is that I am just going to be confident about taking it easy. However, as liberating as this feels, it also feels deeply unsatisfying. It simply feels like a waste of time swimming this way.

Anyone who mostly drives herself through goal-setting — and relatedly, struggles to enjoy downtime even as she procrastinates — will be able to relate to Athena’s challenges. Finding some sort of magical truth that somehow balances achievement and success with contentment and happiness: this is the central struggle of this novel. In addition to pop psych mantras and high-minded philosophical texts, major moments in sports history are painstakingly dissected and examined as part of Athena’s dissertation-writing labors. This is an effort to get to some bigger truth about what it means to succeed as a human, and gives rise to the most thought-provoking passages in the book:

Goals are relevant only if they manage to establish a proper distance between ability and desire, encouraging intrinsic motivation. Note that a goal is not the same as a want. Most children do not have goal when they start a task.

Despite the heavy soul-searching and suicide and academic failures, So Many Olympic Exertions manages to be a very funny book, because there’s so much incisive humor in the novel’s observations. The mood, for the most part, is one of somber hilarity. “I would rather be unhappy than be the kind owf person who keeps an exercise journal,” Athena fumes silently while watching her journal-recommending friend drink tea. At other times, Athena half-mocks her own self-pity. “Eating, writing, sleeping, swimming. My vocation has all the features of vacation for most people,” Athena says of her all-but-dissertation graduate student lifestyle while puttering about in an anxious depression.

Her awareness that her position is one of privilege is made especially acute in her interactions with her parents, first-generation immigrants inured to daily hard labor, poverty, and physical pain. Athena’s mother, who refuses to see a doctor for her debilitating back pain in an effort to save money, tries to put things into perspective when she tells Athena:

Well, I always think when people need to fight so hard for food and shelter they don’t have spare time to think about meaning. Someone stuck in desert never ask, is there cancer in this blue color drink? Wondering about willpower is vacation already […] I think about people who wonder, what is the meaning of life? I think […] this person want to do perfect job for being philosopher. Or they are very smart at come up with excuses to not do any work.

Is thinking about life simply a way to procrastinate from living? Or is a philosophy of life necessary for self-actualization? Should we set challenging goals to motivate ourselves, or confidently take it easy? So Many Olympic Exertions doesn’t provide any concrete answers — I’m not sure any novel can — but provides much to ponder while swimming towards whatever we believe our goals to be. 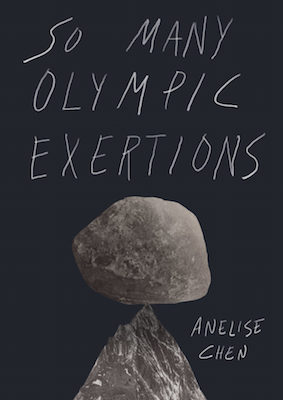