If you want to see the new Mary Corse exhibition at LACMA, A Survey in Light, on display now until November 11, 2019, you have to make a pilgrimage: a slow ascent on an open-air escalator to the third floor of LACMA’s Broad Contemporary Art Museum. The landscape spreads outward with the gentle rise of the stairs. Following your own vanishing point is an appropriate rite of passage for A Survey in Light.

A spiritual mystique surrounds Corse’s work — for the particularities of its display, which require lots of space and light; because Corse worked in isolation for decades at a ramshackle house in Topanga Canyon, raising first one son, and then a second, by herself; because she makes her work — which is both enormous and technically complex — by hand. Finally, Corse is a monomaniac: she paints light.

In a video made for the Whitney, where A Survey in Light was first exhibited last summer, Corse explains, “I try and bring reality into the painting. Reality of our moment here on this ball of mud.” Minimalism decreed that art should have its own reality, not be a representation or an imitation. Frank Stella famously said about his paintings, “What you see is what you see.” With Corse this implies less a simplicity (or obstinacy, depending on your taste) than a profoundly intimate, subjective mode of engagement. As one critic put it, “The work was not autoreferential, but the nexus of a system of shifting conditions in dynamic equilibrium.”

It is difficult to get a sense of this if her paintings aren’t in front of you. In photographs, I saw grey squares with lighter columns coming down the middle, and long rectangles divided evenly into neutral shades. The horizontal brushstrokes in the whiter sections resemble loosely smudged graphite, like a child shading in the negative space of their letters with a pencil. What I read assured me that in person the effect would be very different, but I also learned that Corse often sketches her pieces in graphite before attempting the real thing. She describes these sketches as more intuitive than pragmatic. She also keeps the doodles she makes absentmindedly while talking on the phone as future templates. Devoid of the light and movement that animate her paintings, these photographs take her pieces back in time. One is left not with a faithful image of the piece, but of its nascence, with something like an x-ray, or an ultrasound.

I realized upon entering the exhibition is that it is not quite right to say that light animates her paintings. Light is the painting. Thanks to the refractive glass microspheres Corse incorporates into her white pigment, the enormous paintings in the White Light series look like shining archways. The 1996 White Light Inner Band series, described by the wall text as the “most elusive” of the White Light paintings, dominate the hall. Most are eight feet tall and then mounted an additional foot or two off the ground, and so beautiful and alive they make your hair stand on end.

As in the photos, matte white squares and rectangles are bisected or made into triptychs. But in person these are columns of pure light, which fall gracefully on the canvas in tandem with one’s movement. Like ripples across a still pool, the paintings shift fluidly from white to silver to taupe to grey to gold. They are beguiling and impenetrable, gentle, luminous, whimsical, serene, and as responsive to your presence as any living thing.

Earlier efforts to harness light chronicled in the second half of the Survey prove the expanses of her devotion. The closest she came before the White Light series were light boxes filled with argon gas, made radiant by electromagnetic waves from Tesla coils hidden in the wall. Looking into these boxes is like looking at a slice of cloud between glass coverslips: there’s a sense of animation, but also of something flattened and trapped. Corse felt that they “dealt too much with an objective reality, an outside world.” She abandoned the light boxes in 1968, and with the discovery of her microspheres began painting the White Light series.

There is something playful about the mimetic movement in her White Light paintings, but also profoundly personal. Each one must be experienced alone, both in space — somebody one foot to the left will see something different — and in time — move one foot to the left and you, too, will see something else. Even when standing in place they glimmer subtly, the result of the light in the painting refracting off the minute calibrations of the human body attempting to stand still, which it can never manage entirely. I wont stay still, they whisper, but neither will you. The microspheres embedded in the paint simultaneously harness light and serve as a physical barrier, keeping viewers from the canvas as it refracts light outwards, and the resulting glowing field takes them out of the flat pictorial plane. They beckon and withhold.

Though earlier on Corse made an effort to obscure the artist’s hand in her pieces, sanding her surfaces down laboriously, she enhances the impression of movement in the White Light Inner Band series by leaving visible wide, lilting horizontal brushstrokes. They remind me of something wild and fast, caught for a second in time: the rushing water of a spring, a white hare leaping over winter fields, or the snowy wings of a goose. But what does it mean to make motion still? These paintings are indomitable, but deathly, too. It is impossible not to think about eternity or the infinite. “Death” and “eternity” are alike in being beyond the scope of our imagination. We are fated to movement. I am a part of all that I have met;/ Yet all experience is an arch wherethro’/ Gleams that untravell’d world whose margin fades/ For ever and forever when I move, ponders Ulysses in Tennyson’s eponymous poem, an elegy for the death of a beloved friend.

The White Light Inner Band series bears witness to our vulnerability, to what half-illuminated, ephemeral lives we lead. A delicate futurity is maintained only between the fact of our transience and that people and places retain our impression as negative space. “We appear and disappear,” Corse once offered in an interview. She often gives instructions for lighting her shows that are both intuitive and precise, because it has to be adjusted for each space. In front of one large canvas split into three columns of light, I see that my shadow triplicates as well. I watch my silhouette, and have the sensation, not of looking at a reflection, but of seeing the back of my head as I face forward, observing something the flesh-and-blood me cannot yet see. Corse states that she likes the microbeads because they refract, not reflect, and this creates a triangle between viewer, surface, and light. In the midst of this triangulation, I watch my own back.

Corse describes as a revelation the physics classes she was required to take to manufacture her own Tesla coils, where she was introduced to concepts like nonlinearity, the dynamicness at play in all structures, and the inherent unpredictability seeded in every system. In front of a painting from her White Light Inner Band series, I find myself humming “Landslide” by Stevie Nicks: I took my love, I took it down/ Climbed a mountain and I turned around/ And I saw my reflection in the snow covered hills… Nicks was another artist of the West, shuttling from Arizona to San Francisco to Los Angeles throughout her youth. Corse insists that she could have made these paintings anywhere, but I am not so sure.

She may have searched for the infinite somewhere else, but would she have found it if she hadn’t moved to Topanga, which was cheap enough at the time for a single mother? Stared at the ocean everyday, and stared into her baby’s eyes, watching him, watching his mother? “The baby keeps my head on straight,” Corse retorted, when asked to comment on the difficulty of being a female artist. Despite promising write-ups in places like ArtForum and The New York Times, Corse not only stayed in Los Angeles — considered to be second rate as an art capital — but she fled to the edge, and remained there for 40 years. Where else can the days pass with such blessed uniformity?

Besides, the way that Corse discovered her microspheres is too perfectly Los Angeles: Driving away from Malibu, she noticed that the painted highway lines illuminated for an instant as she passed them. What could be more prototypically Western than the open road? A storm blows in from paradise, and the angel of history is pushed backwards into the future, facing the past. On an unfolding path in the dark, on the Western edge of the nation, nearest to the setting sun, Corse discovers the material to call light into the shape of a door. 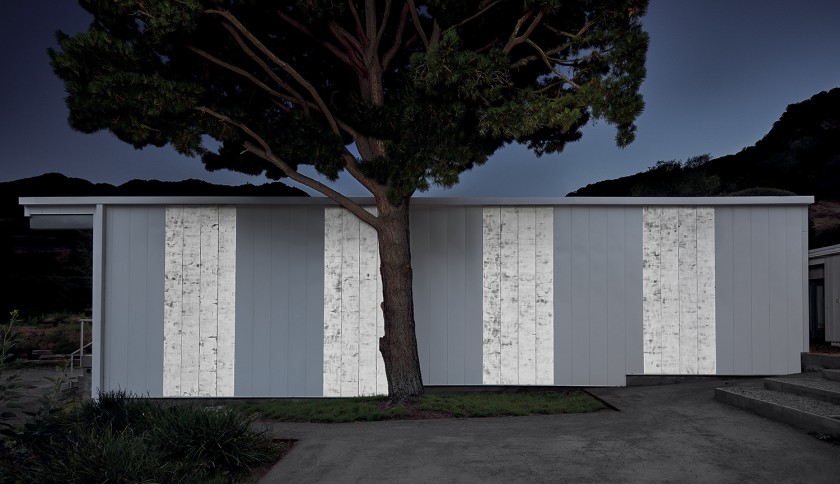