Captain Delano crossed over to him, and stood in silence surveying the knot; his mind, by a not uncongenial transition, passing from its own entanglements to those of the hemp. For intricacy such a knot he had never seen in an American ship, or indeed any other…The knot seemed a combination of double-bowline-knot, treble-crown-knot, back-handed-well-knot, knot-in-and-out-knot, and jamming knot.

At last, puzzled to comprehend the meaning of such a knot, Captian Delano addressed the knotter: —

“What are you knotting there, my man?”

“A knot,” was the brief reply, without looking up.

“For some one else to undo,” muttered back the old man, plying his fingers harder than ever, the knot being now nearly completed.

Some readers, much like Captain Delano, are perplexed and even frustrated by Øyehaug’s knots. For example, in a recent review, the film critic Ignatiy Vishnevetsky dismisses Øyehaug’s collection as “experimentation-for-experimentations-sake” arguing that her stories are “repetitive” and concerned with “willful banality” to the point that they “can’t seem to fulfill an idea.” This is precisely what I admire about the collection: the formal repetition, her attunement to the ordinary, and her resistance to “fulfilling an idea.” Øyehaug is at her strongest and most radical, I believe, when she ties knots that are not easily undone by critics who think “connect[ing] one paragraph to the next” and “ending” rather than “clos[ing] stories abruptly” are the rubrics by which contemporary short fiction should be judged. There is a difference between tying a bow and tying a knot.

There is a long history of male critics dismissing writing by women, often by ignoring their work altogether (last year only 26% of authors reviewed by the London Review of Books were women) and sometimes (unwittingly) marginalizing it in various other ways. Even the giants of the short story canon, such as Nobel Prize winner Alice Munro and Booker Prize winner Lydia Davis, are victims of this process. Munro was charged with writing “domestic stories” by the New York Times in 1983, and, more recently, Davis’s stories were likened to feminized labor, such as “needlepoint” or tweezer work, and the scope of her achievement described as “almost accidental” and “inadvertent.” It seems pertinent, even polemical, then, that the characters in Øyehaug’s stories are all concerned with the need to be seen and heard. From lonely women to existential deer to two-timing husbands stranded in snow banks, Øyehaug’s characters yearn for acknowledgement and reciprocity, and for the equilibrium that such a bond, or knot, promises. Most often, though, they’re denied recognition.

In the place of recognition, the characters are left with a sense of longing, paired with a deep-seeded disappointment, which announces its presence on every page of this book. Øyehaug’s work constructs an ecology of longing. Of failed epiphanies. Of unsatisfied women.

For Øyehaug, longing works in cycles. We see its repetitive nature in “It’s Raining in Love,” a story about an encounter between someone in love and someone a little less in love. What makes this variation on the age-old theme of unrequited love compelling is repetition, not for repetition’s sake, but for the purpose of situating the reader within the narrative. Throughout this brief story, the female narrator reiterates a simple request:

We, the readers, play the role of the partner who is not listening, who must be asked twice. We are forced to slow down. To pay attention. To read the line twice. But at the same time, this instance of repetition means that we also embody the narrator’s voice. Like her, we repeat ourselves; we extend our energy to the non-listener, the one-who-will-not-listen. I ask if he can run his hand through my hair, from the neck up. As such, we occupy both the position of the nonchalant lover and the narrator, she-who-is-loved-a-little-less, whose request for acknowledgement is repeated, in different ways, throughout the collection.

The tension of “It’s Raining in Love” is rooted in this denial, the subtle violence inherent in the act of not listening to women. We see a longer meditation on the theme of bad listening practices in “Gold Pattern.” In this story, a couple, “he” and “she” (the unnamed narrator), break into the narrator’s grandmother’s empty house to have sex. The narrator is evidently doing most of the work for the least amount of gratification. She is “standing on the balls of her feet, one hand on the door handle, the other on the kitchen table, lifting herself up and down.” This, we quickly find out, is a pattern in their relationship or, rather, non-relationship. Indeed, it is a pattern within a broader spectrum of heterosexual relationships: the uneven distribution of labour (emotional and physical) implicit in the bond between a he and a she-who-is-loved-a-little-less.

Always, when it’s nearly over, he turns her around, holds her by the hips. She, on the other hand, has always hoped that he won’t turn her around, but rather come looking at her face-to-face, so she can see what he looks like in that moment. She believes that this expression, this expression of ecstasy, will show her the truth, something that he doesn’t want to show her; she thinks that he loves her, secretly, but that he doesn’t dare to admit it, not even to himself, but she thinks that his expression in that moment will give him away, will express something like love. She has to see it. She has to know what she believes is true, is there. It would be enough. And that is what makes her into what one could only call a fool.

She recognizes the power imbalance. She knows it’s nothing new. It repeats itself with sickening familiarity throughout the four-page story, a Gordian bind that our narrator does not seek to untie or cut.

I’m reminded of a line from Joy Williams’s “The Lover”: “The girl wants to be in love. Her face is thin with the thinness of a failed lover.” Øyehaug cites Williams as one of her key influences, and her narrator, I’m sure, would agree with Williams’s sentiment. With time, the pattern wears thin, both thematically and on a sentence-by-sentence level. It wears thin with the thinness of failed expectations.

At the heart of this piece is what the cultural theorist Lauren Berlant calls a uniquely female complaint: the concession that, for women, Love is the gift that keeps on taking. As we see in the final two paragraphs of the story, the narrator is no longer even holding out for love but rather “something like love.”  For her, “something like love […] would be enough.” And yet, she acknowledges that her complicity in this contract — wherein he is satisfied and she is not — makes her a fool.

This is perhaps the most telling moment in the story, and in several of the other stories that echo this refrain — the acknowledgement that despite her feminist instincts, she can’t extricate herself from this particular knot. At the critical moment, she tries to turn around to face him, but this disruption to the routine quite literally de-couples them. She tumbles onto the floor, and he “finishes off against her back.” She is left as unsatisfied as before, aware, in the final notes of the story, of a cat meowing outside and of “how tired her thighs are.”

The female narrators’ moments of recognition, their multiple failed epiphanies, speak to a particularly contemporary lament. Why, in our emancipated age, do women settle for “something like” love? Or something like acknowledgment? Or something that looks like listening but is not listening? (“Mmm?” he says.) Does this, to use Øyehaug’s phrase, turn us into what one could only call fools?

Øyehaug’s stories do not shy away from the complexity and slipperiness of these questions. What is the alternative, they ask: is it to become even more deeply entwined in a knot of desire, disappointment, and frustration in our search for companionship, acknowledgement, and good sex? Or is it to throw the knot overboard, which is what happens aboard Melville’s ship, and discard it entirely?

These are the questions that loom below the surface of Øyehaug’s stories. And, for the most part, they go unanswered. Knots does not promise to “fulfill an idea” but rather disrupt the notion that an idea can be readily filled. The stories do not arrive at an ending. They drift. Pause. Re-knot. Even “The Deer at the Edge of the Forest,” which, in my mind, is one of the most delicate and complete stories in the collection, does not land on a punch line, as Vishnevetsky claims, but rather, ends on a line that travels.

The story starts: “The deer stood at the edge of the forest and was miserable.” Why? Because, the hart complains, “there’s no-one who sees me. Am I invisible or what?” Again, we come back to the desire to be seen and to be acknowledged at any cost — literally at any cost, in this case: “I’m open to being seen,” the deer admits, “to being shot.”

To see and be seen — isn’t this love? At least something like love or acknowledgement or reciprocity, the qualities that all of Øyehaug’s narrators yearn for. The hart continues:

If someone doesn’t see me soon, I’m going to do something drastic, I mean it. Right now it feels like I’m trapped in deerness. Oh, I would love to change everything, be someone else, something completely different. Oh imagine if I could be a roe deer, an elk.

Rather than tying up the narrative, this last sentence opens up the story. The line speaks to our limited imagination but at the same time moves beyond the hart’s — and the heart’s — limited aspirations. We see the roe deer leaping; beyond the trees we glimpse the elk’s antlered shadow.

As I write this review, seated at the window of a Montreal café, a friend reaches over and picks up Knots. She rubs her thumb across the “O,” reads a page, looks up. “This is so funny!” she exclaims. She’s reading “An Entire Family Disappears,” a story told in stage directions in which “AN ENTIRE FAMILY” is shocked to discover that their “newly buried mother, grandmother, great-grandmother had been sexually active.”

AN ENTIRE FAMILY (drops its eyes to the floor)

AN ENTIRE FAMILY (suddenly understands the truth about their own lives: that they could have easily not been here) 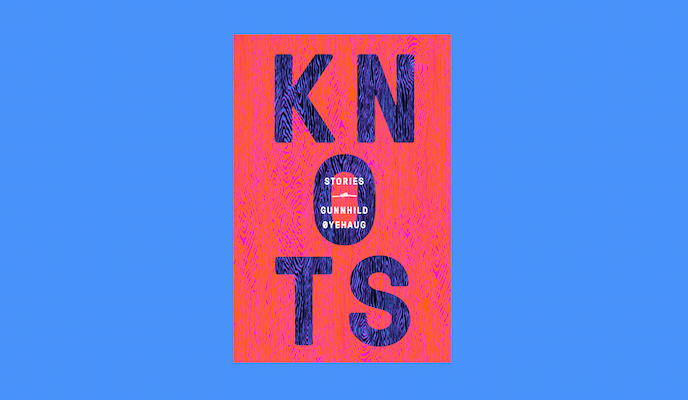