In Levinas, Storytelling, and Anti-Storytelling, Will Buckingham argues that silence is, in actuality, the refusal of a relationship. When approached with poetry in mind, this gesture might be understood as a rejection of a particular kind of interaction with a literary text, in which the author assumes a role of absolute power relative to his or her audience. More often than not, this kind of power imbalance is bound up with traditional models of reading, in which the writer functions as the active agent, presenting meaning to a passive and disempowered reader. For poets who wish to embolden their audience, and encourage them to assume a more active role in actualizing the meaning of the text, it is essential to demur from the role of the author as it is traditionally envisioned. With that in mind, experimental writers are increasingly inviting silence to inhabit their work, creating an aperture for the reader’s imagination to enter the text. After all, as poet Myung Mi Kim once argued in a lecture on experimental poetry, it is silence that leaves room for the other to speak.

For poets across generations and historical milieu, voice itself was an alterity that speaks through the writer, and it is silence that allows this mysterious other to breathe through the poet, who functions as merely a vessel. In this sense, the text becomes a collaboration between reader and author, as well as between the writer and this mysterious alterity, which may or may not be housed within the poet herself. Indeed, the variations on this particular model of the writing process are numerous. Modernist poet H.D. envisioned this otherness as the unconscious mind as theorized in Freudian psychology, whereas for Homer it was the muses, who he invoked at the beginning of his epics. Jack Spicer, on the other hand, famously described this alterity as “radio transmissions from outer space.” Despite these conceptual differences, writers working within a tradition that links poetic voice and alterity share a commitment to challenging the notion of authorship as an individual endeavor, instead framing it as a shared experience, in which the writer relinquishes both ownership and some degree of artistic control. This, in the end, gives rise to a kind of collective consciousness, or, what Mikhail Bahktin described as the “dialogic imagination.”

Recent years have seen a veritable renaissance of collaborative writing, which actively engages these questions of voice, alterity, and shared consciousness.  Julie Marie Wade and Denise Duhamel’s The Unrhymables and John Gallaher and G.C. Waldrep’s Your Father on the Train of Ghosts frame collaboration itself as a kind of alterity, a “third voice” which belong to both of the creative practitioners and neither one of them. As each of these texts unfolds, it is silence that allows the reader to become an alterity that speaks through the text, that mysterious other who’s constantly “dreaming of people in great arcs.”

In a recent interview on their collaborative process, Waldrep observes that “what we thought the book wanted was to evolve towards a third voice, neither G.C. Waldrep nor John Gallaher. Learning to listen for that voice, and to revise towards it, was a new experience.” In their creative practice, the concept of the “third voice” was quite multifaceted, as both writers would contribute individual poems to the book, while also taking turns inhabiting a “third voice,” which emerged out of the collaboration and belonged to both writers and neither one of them. In this respect, the third voice becomes both an ongoing presence within the collaboration and a self-reflexive gesture, a visible performance of what writing should — or can — be, if only the poet relinquishes some degree of control over readerly experience and the creation of meaning within the work.

Your Father on the Train of Ghosts was among the first 21st century collaborative volumes to challenge readers and creative practitioners in this way. Published by Boa Editions in 2011, Gallaher and Wadrep’s project functioned as a harbinger for what would become a veritable avalanche of collaborative texts, which later included work by Dean Rader and Simone Muench, Carol Guess and Daniela Olszewska, Matthew Cooperman and Aby Kaupang, and many more. What’s particularly revealing about this moment in American poetics is the impulse to bring an overlooked or undertheorized aspect of writing to the fore, to remind us that all of consciousness — and all of speech — is an inherently social endeavor. After all, creative practitioners are constantly borrowing from, appropriating, and revising a shared vocabulary of cultural symbols. In a recent lecture in New York University’s Paris Writing Program, poet and professor Matthew Rohrer goes so far as to say that any attempt to inhabit language is collaborative in nature. When one opens one’s mouth to speak, it is inevitably an act of theft. Similarly, as Adriana Caverero claims in her study of vocal expression, For More Than One Voice, voice itself is a social construct, as it is impossible to speak without another voice with which to enter into dialogue. Approached with these ideas in mind, Gallaher and Waldrep’s calls our attention to voice as a shared endeavor, rendering this abstract philosophical idea suddenly performative through the style of their writing, and the daring structure of their collaborative project. In this sense, Gallaher and Waldrep remind us that language itself is an otherness that breathes through us, that ever-present “room of people dressed in bright clothes.”

Indeed, Gallaher and Waldrep posit their text as a space for a kind of collective consciousness to emerge, which begins with the emergence of the “third voice,” and is fully actualized by the reader’s experience of – and participation in – the book. Perhaps surprisingly, Gallaher and Waldrep describe their project as epistolary in nature, the poems functioning as letters between friends describing the quotidian and wonderfully strange phenomena of their daily lives. The poets did not engage in communication outside of the collaborative text, which served an informational function in addition to an artistic one. As their conversation unfolds across the vast imaginative terrain of this ambitious project, it is the silences that welcome readers into what might have otherwise risked being an established dynamic between two people, a private exchange between friends.

Gallaher and Wadrep write in “The Carnegie System,”

Another hearse parks in front of the library
and you think, “Whatever happened to all those nuns?”
You used to see them pretty much everywhere,

in the train and the bus stations,
in the hospital waiting rooms, at the library of course
on afternoons when the carpet mills weren’t running…

Here silence takes many forms, including elisions, wild associative leaps, a purposeful withholding of narrative context, enjambments, and of course, caesura within the line.  Gallaher and Waldrep first invite silence to inhabit their work as they transition from the title to the text proper, as the co-authors provocatively withhold the exposition to which readers have become accustomed. Indeed, the title raises more questions than it offers answers, prompting the reader to consider the role that “hearses,” “nuns,” and “libraries” play in this “system,” which abounds with chaos and mystery. Similarly, as the reader transitions from line to line, Waldrep and Gallaher’s provocative enjambments remind us of the fairly universal predilection for narrative, as one naturally strives to unify the disparate storylines suggested by the first line and the second. In such a way, the reader arguably becomes the third voice that emerges from the collaboration, as Waldrep and Gallaher invite their audience to actualize the world of the poem, that mysterious “system,” through their myriad silences and elisions. As the co-authors themselves observe, “their voices were coming through / on the radio, / saying, ‘I should’ve warned you.’”

Like Gallaher and Waldrep, Denise Duhamel and Julie Marie Wade frame collaboration as the cultivation of a shared consciousness. For these feminist creative practitioners, however, this imaginative space is a highly politicized one, as they strive to create shared feminist consciousness across the boundaries of age, genre, and sexual orientation. It is worth noting that Duhamel and Wade come to this collaboration with vastly different backgrounds, Duhamel being a straight poet from the generation before Wade, who works primarily in prose and serves as an activist within the LGTBQ+ community. With that in mind, Wade and Duhamel foster a space for feminist dialogue through collaborative poetry, one that transcends the minutia that frequently divides historically marginalized communities from within their ranks. What’s more, Wade and Duhamel inhabit this shared space in order to work toward an understanding of women’s history, while at the same time imagining a future that is more just and more true. As the book unfolds, the work’s myriad silences ultimately invite the reader to participate in building this new narrative, and its ensuing vision for the future.

“It isn’t a secret exactly, though I never say it out loud: I have always wanted to wear a suit,” Duhamel and Wade write in the collection’s opening prose sequence, “Threshold.” Just as the narrator of this piece refuses binary gender categories, Duhamel and Wade ultimately reject the limiting strictures of genre. Indeed, as the co-authors strive to create a space that transcends the boundaries of gender, age, and sexual orientation, they work in a liminal space with respect to form, showing us that the bright apertures, the small gaps between the things we know, are rife with possibility. As Myung Mi Kim once argued in a lecture on twentieth century women’s poetry, it is the liminal spaces that afford the greatest opportunities, that it is where the rules of language no longer hold. Or, writers like Duhamel and Wade can create new rules there, as well as new ways of inhabiting language. After all, a revolution in the social order begins at its very foundation: the rules of language itself.

As Duhamel and Wade transition from one discrete, self-contained prose episode to the next, it is the silences that set language off, that allow us to situate ourselves within its terrain. Granted, the gaps between the prose sections also become performative, mirroring the ways that the narrators have been silenced by a patriarchal society. “For Christmas, the only gift I could give her was my silence,” Duhamel and Wade write. Yet at the same time, the silences that inhabit the work also function as a corrective gesture, empowering the reader in situations where the speaker of the poem found herself voiceless.

For these co-authors, women’s anger retains revolutionary possibilities, and this is part of what propels their shared vision forward. “Once, I was so furious I grew afraid of myself,” Duhamel and Wade write, “I googled: how do I stop being angry? According to the search engine, my question yielded “about 96,500,000 results.” Duhamel and Wade ultimately reject any single answer, instead offering the reader a space in which they can give voice to the “rage and red-hot coals” that are so often elided by society’s broken structures. As Duhamel and Wade themselves write, “I tried to make friends with my inner red, rolled out the red carpet and took another step.”

If poetic voice is an alterity that speaks through the writer, can collaboration shed light on the ways this otherness is politically charged? In co-authored texts by John Gallaher, G.C. Waldrep, Julie Marie Wade, and Denise Duhamel, we are made to see that collaboration is essentially the creation of community, an inherently social endeavor that involves and implicates the reader. Indeed, it is the silences, elisions and ruptures in a collaborative text that allow the reader to participate in the poets’ vision, to stake a claim in a new vision of history, whether it is deeply personal or far-reaching in its revisions of society’s broken machinery. As Gallaher and Waldrep remind us, “All the photographs in your wallet are of / politicians, honey running down their chins, / and of you, with your mouth sewn shut.” 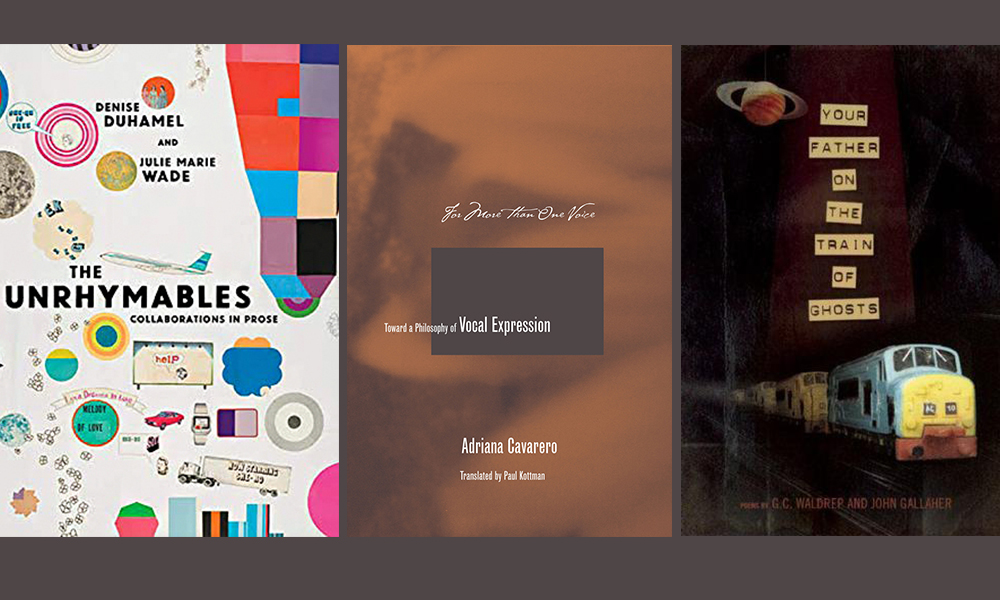