Pick any street in any major city in the United States. My friend and I walk down it, mostly likely with some kind of bougie iced-coffee in hand. We’re mid-conversation about something trivial — romantic prospects, a Buzzfeed article, celebrity gossip.

“Excuse me, Miss, do you have any money to spare? I’m trying to get something to eat.”

My friend and I continue walking, a moment of awkward silence between us. “What was I saying again?” I ask before I remember, and I start back up about how cute Khalid’s latest Instagram post was.

It’s an interaction I’ve had many times in many places. Sometimes I’m prouder of my actions — when I actually give some money or food. Other times, I more ashamed as I chose to ignore a fellow human being on the street.

Of course, my awkward shame is not the most pressing part of this scene, but I share it because through this privileged lens I can confront the modern problem we are all well aware of but unsure of how to address.

These numbers describe the magnitude of homelessness plaguing the country but do little to paint a picture of the real human problem. In hopes of sharing a truer, fuller story, Susan Celia Greenfield, an English Professor at Fordham University, interviewed 13 previously homeless people who graduated from New York Catholic Charities’ life skills empowerment program and edited their personal histories into the collection, Sacred Shelter: 13 Journeys of Homelessness and Healing.

In the opening pages, Greenfield is quick to note the book’s limits: “Except for a few pages in this Introduction, Sacred Shelter says virtually nothing about the socioeconomic conditions and inequities that cause homelessness. It offers no recommendation for how to alleviate the systematic forces that perpetuate it. That is best left to other books.” The unique life stories collected here do not offer grand solutions, but rather, an alternative narrative about homeless people. A narrative that is multi-faceted and distinct, that encompasses a black woman from North Carolina and an international businessman from Japan, that recognizes the personal trauma of losing a loved one and the systematic inequity of white flight, and that honors the agency, evolution, and strength of those who have experienced homelessness.

After interviewing these individuals, Greenfield had to edit and organize their complex lives into coherent, written stories that would resonate with readers. Ultimately, she favored a linear format whereby each contributor’s story starts in childhood and ends in present day. As a literary critic, she recognizes the pitfalls of such an approach: it doesn’t really capture the way people think or talk. However, by adhering to a chronological order, she honors the life skills empowerment program’s mission and each graduate’s journey and eventual success. “There is an advantage to having a chronological narrative in the way one makes meaning,” she says, “particularly if your goal is in part to understand and absorb something that happened to you, but to also move past it and have the idea that you can move past it — which all of us need in so many ways about different things.”

Greenfield worked as a story facilitator for the life skills program and ran workshops for those who had experienced homelessness. She reminded her students that the word “author” was related to “authority” and that the point of telling one’s story is to gain authority over what one has been through and how one describes their life to other people. Telling events in a chronological order aids this process and celebrates the progress each person has made.

Sacred Shelter’s form of storytelling was born out of the life skills empowerment program’s curriculum in which participants tell their stories to an audience. Michelle Riddle, one of the book’s contributors shares how impactful these events can be: “On Speaker’s Night, I got picked to tell my story. I was really nervous, but God helped me and took over. I shared about what I had done. I shared about prison, and I shared my experiences coming back home. After I finished, I got a standing ovation.”

Storytelling is so powerful because it transforms a nameless, faceless person we may encounter on the street into a tireless, courageous fighter named Michelle. By knowing someone’s personal story, we’re able to understand, empathize, and connect with the unknown. Another contributor, Deborah Canty, learned this lesson when she roomed in a shelter with a woman who had previously cussed her out: “[S]he had been in foster care all her childhood — and now she was in a shelter. It never ended for her. Right then and there, I got up and embraced that woman. We spoke every day after that. No wonder she was so violent. Hurt people hurt people. I know because I hurt a lot of people with my pain.”

Pain fills the pages of Sacred Shelter as contributors tell us about abuse, addiction, and death. They put their lives on display for the reader and from their vulnerability emerges literary art. “It was just striking how often it was at the most shocking, horrible parts of the story, out would come the art,” Greenfield says. Canty’s recollection of her rape and molestation exemplifies how such tragedy can be vividly manifested. She describes a reoccurring dream from her childhood where her sister and her are lying on their couch with sheets pulled over their heads. All they can see is the warm, glowy light, a symbol of their innocence. Then the dream shifts and Canty suddenly feels a terrible pain. Her mother appears and throws her on her bed, opens her legs, and asks, “Who did that? Who did that?” It’s a stark reminder that the basis of meaningful art and important stories is not necessarily craft, skill, or talent, but the vulnerability of sharing a real human experience. 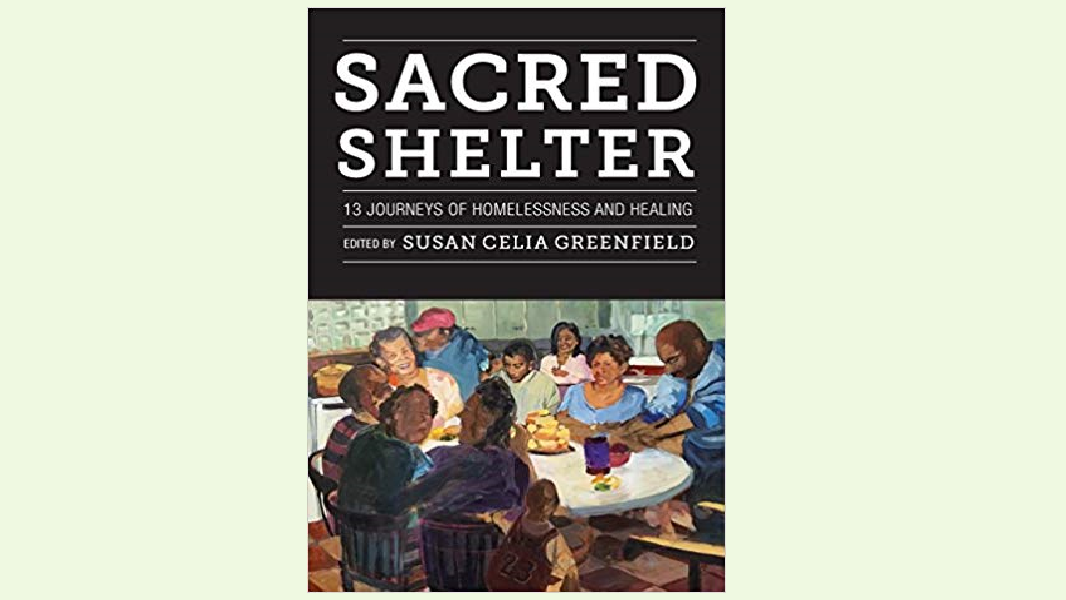