A cartoon man stands with his left arm slung chummily over the shoulder of an Apollo statue. Apollo’s eyes are turned away from the man, toward something outside of the scene’s parameters. The man, unaware of Apollo’s disinterest, is grinning and pointing with his other hand at a woman on the opposite side of the picture, who is turned away from her onlooker. Her arms are folded, feet together, back straight, ignoring the man and his immobile counterpart. The two stand willfully ignorant of one another’s perspectives.

This is the cover image of Not All Dead White Men, by Silicon Valley-based classicist Donna Zuckerberg. The cover is telling of how the subject of her book — far-right internet bloggers — think about our ever-growing “gynocentric” society. These men feel abandoned, and in their abandonment they grasp for a return to the glory days when men acted uninhibited by women; a time when there was no word for rape, feminism did not exist, and women’s actions were determined by male relatives: the classical periods of ancient Greece and Rome. The woman on the cover might represent, in opposition, feminist students and academics who want to prohibit problematic writings by dead white men that depict misogyny, abuse, and sexual assault. Both sides are discussed in Zuckerberg’s work. And she criticizes both for their decontextualized uses of classical texts.

The bloggers who wield ancient texts as a means to combat feminism call themselves the “manosphere” and “men’s rights activists” (MRA) or men’s human rights advocates (MHRA). They gather on Reddit, specifically the subreddit The Red Pill (TRP), as well as sites like Return of Kings, Chateau Heartiste, and A Voice for Men.

Some describe these men as part of the alternative right or alt-right — a group for which Zuckerberg provides a broad introduction. But while the alt-right’s major focus is “biological race,” specifically white identity or supremacy, this other camp focuses more on gender politics. Oftentimes they are referred to, somewhat disparagingly, as the alt-lite.

Partially because it’s a stumbling block for those in TRP, race appears repeatedly in Zuckerberg’s work. After all, the concept of “biological race” did not exist in ancient Rome or Greece. It’s difficult to relate to the ancient world through race, while through gender, writes Zuckerberg, “the men of the manosphere see their own misogyny reflected back at them, theorized, and celebrated in ancient literature.”

Two of the types of texts most prominently used by these communities, and so most frequently discussed by Zuckerberg, are writings by Stoic philosophers (specifically from the Late Stoa period) and writings by the Roman poet Ovid. Return of Kings writer and founder Daryush Valizadeh (also known as Roosh V) is one of the Stoics’ most dedicated devotees. Valizadeh is a professional pickup artist (PUA) and he claims to base his life on Stoic philosophy, using it as a self-help tool.

But as Zuckerberg points out, there’s an irony here. At least in academia, Stoic philosophy has a reputation as being ardently feminist. “In theory,” Zuckerberg writes, “Stoics believe in an ideal cosmopolis […] where everyone would be an equal citizen regardless of class, ethnicity, or gender. In practice, many of the Stoic writers whose works we still have were highly conventional [not progressive or feminist] in their approach to social issues.” She then points out the overt misogyny within Stoic texts and how easily they can be appropriated by bloggers like Valizadeh. Zuckerberg, though, wants to argue that Stoicism can still benefit women, that not all Stoic writings are misogynistic, and that some Stoic texts have simply been weaponized and decontextualized to serve TRP’s misogyny. Stoicism’s ability to be coopted by both far-right bloggers and feminist classicists indicates just how difficult a task Zuckerberg has set out for herself.

According to Zuckerberg, one way to navigate the inconsistencies that arise during any engagement with both classical texts as well as the contemporary “manosphere” is attention to context. After all, we live in a very different time than classical authors, so classical texts should be from the outset viewed with that in mind. She floods the reader with biographical information of Stoic thinkers, perhaps too much, but to a specific end: she wants the reader to understand that a frame of reference is what contemporary misogynists are missing. Men in TRP pride themselves for being advocates for Western culture and, as Zuckerberg writes, “the Western classics are valued more for being Western and classical than they are for their content.”

Ovid was writing during the reign of Augustus, a time of strict sexual morality. The poet was supposedly exiled for his writings, but still continued to write. This is why the men of the manosphere find him so alluring. Writing was his political resistance, and now it is their own. Of course, our society is different from that of ancient Rome, and Zuckerberg makes plain the absurdity of that comparison. She turns to Nietzsche (also a favorite of many in the alt-right) to explain: in We Classicists, Nietzsche writes that comparisons of the ancient and modern become largely questions of differing values. We do not value the same objects, actions, or desires as those in ancient Greece or Rome.

One persistent thread in Zuckerberg’s work is that the power dynamics are less effective in progressive societies than in the United States. For example, Valizadeh has written numerous books (that were recently banned by Amazon) about his worldly travels as a PUA. Where he has found great success in countries like the US, Valizadeh found no success in progressive Denmark. “Since leftist social progress renders game tactics ineffective,” writes Zuckerberg, “it is no wonder that pickup artists long for the lost mores of ancient Rome.”

Zuckerberg argues that it is important to study why classical texts have been weaponized by TRP and how, regardless of their “appropriation of antiquity,” the ancient texts are already problematic themselves. So, rather than simply comparing the ancient texts to the manosphere blogs, Zuckerberg aims to compare the underlying theories that inform the writings of PUAs, Ovid, and others. Again, she turns to the outer societal context to discover why the men of the manosphere revere Ovid’s writings and similar texts.

Of course, as Zuckerberg points out, a critique of the problematic content within ancient texts can be taken too far. Her analysis is even-keeled because she not only condemns misogynists and racists on the manosphere and in classical texts, but also criticizes radical feminists, students, and progressive classicists in academia. For example, Reed College students calling themselves “Reedies Against Racism” (RAR) recently protested the existence of white men in the curricula of a basic required humanities course. RAR argued that the class’s Eurocentrism was a form of white supremacy and that all of the texts written by dead white men should be removed. Zuckerberg argues against the removal of classical texts from academic syllabi, and instead advocates for a more informed understanding of the societal context surrounding the authors of those texts. She points toward the implications that of banning classical literature: countless feminists, theorists, and leftists in the past — such as Judith Butler, Simone de Beauvoir, and even Jay-Z — have used classical texts to better understand patriarchy, oppression, and resistance. Zuckerberg sites her own online journal, Eidolon, as a source for how to use ancient texts to resist, rather than ossify, misogyny.

Ancient texts serve as the rose-colored lens through which the men of the manosphere see the world. The same classical texts are viewed as problematic and objects that should be prohibited by progressives and radical feminists. But Zuckerberg argues that neither of these extremes is appropriate — she treads the fine line very well, often referring to herself as a feminist who actively studies and writes about classical texts. The utopian visions of both sides lack context. The men of the manosphere are able to experience their aims through the translated written word while surrounded by a completely different societal context, and those who want to eliminate the means by which these men operate are ignoring the benefits of reading classical texts towards the end of challenging cultural and often misogynistic norms. Zuckerberg urges against the utopia and idealism of both, while advocating for an informed critique of ancient and contemporary misogynistic texts. 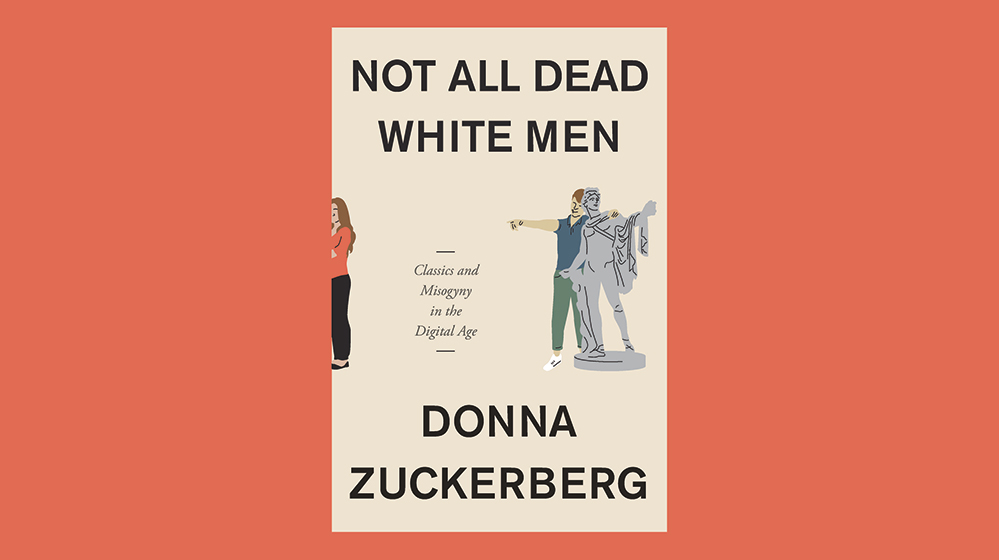