I’m not a radical. I wouldn’t even call myself an activist. And yet, in just the first three months of 2018, I added my presence to the Women’s March in Los Angeles, my name to petitions on behalf of DACA, my voice (or voicemail) urging senators to stand against the travel ban. My family marched in the March for Our Lives, and my daughters walked-out in the National School Walkout to end gun violence. These events gave me concrete hope. I felt empowered. Tides were turning.

But after each protest, I watched our President and Congress pay lip service at best, or worse, act as if nothing significant had happened at all. So how do I sustain hope in a country where, as Ryan McIlvain writes, “predatory capitalism has never been more invisible, more inevitable-seeming”? How do I make a difference when my protests and signs and petitions feel like “just theater”?

That’s the dilemma facing the narrator of McIlvain’s eloquent and penetrating new novel, The Radicals. Eli is a hyper-educated young Socialist working as a teaching assistant at NYU: “I looked like my Russian Jewish father — dark hair, easy five o’clock shadow, a certain basset hound wariness about the eyes.” After years in grad school reading “abstruse Marxist polemics,” Eli has lost his feel for it. He finds himself adrift, still publicly committed to the cause while privately wondering what he’s actually doing with his life. Through McIlvain’s alchemy, Eli becomes a modern Everyman.

The novel begins when Eli meets Sam, an ex-Mormon MFA poet looking for a more radical form of expression. They become unlikely friends, playing tennis and talking politics. Sam jokingly calls Eli “comrade” while Eli casually offers Sam leftist literature. “I couldn’t have known,” Eli reflects, “I was standing across the net from a murderer, and neither could he.” McIlvain lands that hook on page two, and proceeds to draw the reader across a landscape of idealism, despair, greed, love and loss. But don’t expect a conventional thriller. McIlvain is heading into deeper waters.

Eli invites Sam to Phoenix where a group of activists are trying to stop a bank from foreclosing on Maria, a single mother. They camp in the backyard, make signs, canvas the neighborhood. The campaign is led by Alex, Eli’s charismatic ex-girlfriend:

She was smiling the smile of a Mona Lisa, cryptic, distracted, beautiful. I’d forgotten how beautiful she could be in her tossed-off, anti-beautiful way: the tomboyish hair that she cut herself, the dark straight bangs that boxed in her round olive face, the large eyes, the strong and aquiline nose, a little ebony stud at the line where the nostril began to rise. Ancient people survived in her face, some of the Aztec blood this country and others had worked so hard to wipe out.

At first, Alex is amused by Sam, calling him Eli’s “Mini-me.” She takes Sam for a “tourist” in social justice — until Sam initiates abrupt action on his own. Without consulting the group, he meets with the bank and arranges for “partial debt forgiveness”: Maria will still lose her home, but won’t owe the bank nearly as much money afterwards. Alex is furious. The whole point of the protest was to raise awareness, not make the banks look like good guys. Sam doesn’t buy it:

“I live on earth,” Sam said. “Maria and her family live on earth, in the real world […] You’re waiting for the revolution to come and in the meantime a family’s about to lose their house and gain a toxic load of debt in its place. […] A hundred thousand dollars in debt forgiveness is real — whatever we’re playing at here is not.”

This moment introduces a central tension of the novel: how far do you push belief into action? Eli has lost faith in his academic idealism because it feels disconnected from the real world. When a bank forecloses, what good are books, debates, and disserations? But even Alex’s strategic activism, once fierce and thrilling, feels self-serving now. Isn’t she just using people like Maria to draw attention to her political agenda? Only Sam is willing to compromise both ideals and strategy to get results, but that very willingness may lead to more violent confrontations. Eli feels paralyzed by these choices.

Back in New York, he struggles to maintain interest in his post-grad studies. His advisor, Dr. Linda Hahn, “grumpy, graceful, small-toothed, bob-cut, lithe,” does more than help him stay afloat in the program. Hahn is a role model for Eli and represents one way to merge idealism and reality. She is a writer, organizer and protester, yet lives in a penthouse apartment; she’s an unrepentant Stalinist, yet tenderly cares for her husband as he folds down into ALS (Lou Gerhig’s Disease). Hahn has learned to live with contradiction. She is Eli’s proof that a radical can be conventional, that you can live in and love the world and dismantle it at the same time.

Eli has the opportunity to find this balance when he falls in love with Jen Daugherty, a talented pianist graduating from NYU. Eli realizes that love and rebellion use the same tactics, but instead of one side trying to tear the other down, love is a shared disarmament:

I think the real excitement lay in the mutual taking down of barriers, guards, insecurities, uncertainties, hesitations, fears […] We lay in bed naked and simple and conducted our lives for each other, our pasts, our desires, everything — or almost everything. We didn’t go in for total disclosure, honesty as blood sport. We weren’t foolish enough to think that the heart’s dark corners look good under a klieg light.

That openness, that generosity, promises to nourish Eli as he toils in the trenches of justice — if he can only commit it. His efforts are derailed when Sam and Alex reenter his life. Since their last meeting, they’ve become a power couple in the resistance and formed a more radical branch called the Group. They invite Eli to join. “What are you accomplishing with all those motions and sober discussions at ISO meetings, all that impotent talk?” Alex asks. “We’ve got actual plans in the Group.”

When Eli visits, he finds the Group bunkered in a nondescript house on a nondescript street. “Only on the inside did the House distinguish itself as the sort of punk pad-cum-commune it aspired to be: Trotsky beside Lenin beside Baraka on the sagging weathered built-ins […] the obligatory red fist, a Sharpied encouragement to FUCK THE POLICE! It was the signature decor, the feng shui of another, older time, only now it belonged to our time, too, by sheer insistence.”

As much as he longs for a conventional life with Jen, there’s something in Eli that responds to this too, though he’s afraid of where it could lead. His foreboding is beautifully evoked in the change Eli sees in his old tennis partner, Sam:

He ran hot and cold sometimes in the space of a single sentence, and the cold could stop your heart, as if you’d swum out with him into the warm shallows of his old enthusiasm, his old joie de vivre, only to feel the bottom drop out at the continental shelf’s edge.

McIlvain shorts us a bit on Sam and Alex’s journey. I would have loved to witness their transformation more directly. But like a child you only see every few years, these magnetic characters evolve mostly off the page. When we see them again, there’s a sense of having missed something essential.

Nonetheless, the stage is set. As an Enron-like company makes headlines for bankrupting millions of lives, and the Group plans to take some form of extreme action, and Eli realizes Jen is the love of his life, we know we’re on a collision course. By the end of this novel, none of the characters will be the same.

Through it all, McIlvain never loses sight of Eli’s humanity. Part of the secret, of course, is in the language itself. The prose is fluid, filled with quick poetic imagery, as if Eli isn’t using words so much as telepathy. But the real accomplishment is McIlvain’s restraint, his determination to stay inside Eli’s skin.

Some might argue that not enough happens in The Radicals, that it needs to be more explosive or timely in some way. That certainly would have been easier. But I think McIlvain is after something more personal. He’s not holding a mirror up to society; he’s holding it up to you and me. How do you, as a basically honest person, respond to intentionally corrupt power? How can you fight on one side of your life and love on the other? How do you live now?

Like Eli, I feel torn between the comforts of life and the injustice that seems necessary to support it; between ideals and reality. And like Eli, I don’t know what to do about it anymore. I’ve protested. I’ve donated. Such actions exerted pressure on the power structures in the past. But now? As Eli observes, “Marches and protests were the release valves a militarized state let the people pull.” So what do you do? Do you give up, keep grinding away, or take more extreme action? The Radicals is a heartfelt exploration of questions that may be impossible to answer. 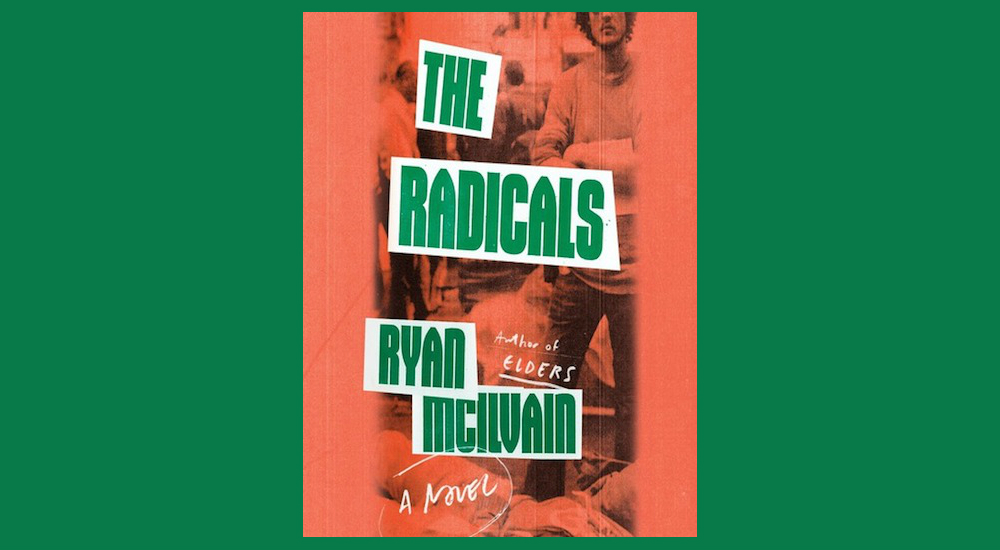