My first encounter with Vanessa Angélica Villarreal’s stunning new book from Noemi Press, Beast Meridian, was framed by the natural and geopolitical disasters of late summer 2017. As Hurricane Harvey devastated coastal Texas, Villarreal’s book seared me with its portraits of Houston in storm season, the ocean “slicktongued and thick with oil and ants.” Only days after Trump crowed over the end of DACA and then feebly tweeted, “No Action” (attempting to reassure those who feared deportation during the program’s six-month phase out), nine Dreamers were detained for hours at Falfurrias Checkpoint. That very day I read and reread Villarreal’s wildly inventive prose poem “dedicated to the immigrants buried in mass graves in and near Falfurrias, Texas,” in which the poet walks the sacred ground where “agitation pulls even at hanging planets”: “I swallow a bee for each ill deed done. I am a hive walking. I strain to hear you over the regret.”

The alignment of news and poems is not coincidental. Every cultural form emerging from the U.S. today is shaped by the converging pressure systems of racism, and of capital that moves freely across borders while denying freedom of movement to the workers who sustain the system. Villarreal’s volatile, hybrid forms correct and critique the sound bites repurposed by news anchors. Beast/Meridian tracks the storm of the intensifying attack on [email protected] authorized and provoked by the highest levels of our government. Villarreal gives words to the radical alienation that precedes immigrant dispossession and follows in its wake: “We scarcely/remember our flesh forms, or recognize/our ownership.” Above the pain and suffering, this poet’s historically astute and electrically present voice issues its clarion call to a new generation of Americans: “I am returned to beg back this/amber music written in me.”

Falfurrias is just 76 miles from Villarreal’s birthplace in the Rio Grande Valley city of McAllen, Texas. Born to Mexican parents whom she describes as “formerly undocumented,” Villarreal was raised in Houston, educated in Colorado, and lives currently in Los Angeles where she is in the PhD program in Poetry and Digital Media Arts at University of Southern California. Or, in her own words: “first-gen grunge rgv htx xicana / hybrid poeta bruja / USC PhD+mami.” The poet’s immediate and ancestral family is present on every page of the book, in the dedication and candid photos, and in the intimate, shape-shifting figures called out by the poet’s words. Every sense of “meridian” is present in the fluid interpenetration of physical, celestial, human and nonhuman realms: “The earth’s bodies, each in their own way, recover the realm of the living to give to the dead of their origin, repair the seams between worlds along its meridians.” Seas and rivers churn throughout. And if the reader were to “[d]raw      a line     through/our scattered bodies/the meadow reveals our constellation.”

The governing presence of the book is that of Villarreal’s grandmother, Angélica Lopez, who died at the age of 50 from cervical cancer. (According to her website, Villarreal’s current project grows out of her interest in women’s access to healthcare in the borderlands, researching this “common and fully preventable form of cancer that disproportionately affects poor women of color” and focusing on “the non-disclosed sterilization of Latina women from 1922-1972.”) Angélica’s loss is made all the more potent by the timing of her death, which coincided with the poet’s onset of puberty. The two events merge to form an intimate bridge of female loss and poetic expression, “your black cervix rot my first egg drop/& so we hatched myself—//this is how you said we would survive.” Villarreal’s survival is constantly tested in her adolescence: by sexist, racist and homophobic assaults, and by individuals and institutions that mark the young poet as “at-risk” and “delinquent,” exerting often violent pressure on her to conform to white norms. One poem and its accompanying photo identify the young poet as a patient in a Houston psychiatric hospital in 1996, three years after Angélica’s death. According to this book’s arc, however, the generational connection between women is ultimately fruitful, bearing “a knowing so inherited/I am pregnant with eyes,” and a poetics that, at its most dramatic, can return the dead to life:

castanets tie themselves with curry-colored

Villarreal’s experimental numbering stands out. Numerals give a block poem the appearance of biblical verses or impose an arbitrary order on fresh experiences, creating a sequence which bends otherwise dissociated events into relation:

3. At the McDonald’s, a man in a parked car will take himself awake. This is another

4. A prayer for the king: forty pears, all bloomed from young throats. Long life, a sea of

rice, a thicket of braids.

One by-product of juxtaposition is irony. Footnotes beneath the “assimilation room” poems are drawn directly from sociological scholarship on the “problem” of acculturation: e.g. “‘This association is purported to reflect, in part, the impact of negative experiences faced by immigrants in the process of assimilation, i.e. acculturative stressors.’” Academese falls off the edges of Villarreal’s edgy poems like rotting rind, leaving behind “each/milk tooth/a little bloodrot.” In “Border Semiotics,” “Free trade manifest destiny market market market” is defined as:

Elsewhere, the poet registers unironic appreciation of form as system. In a set of instructions about how to survive a border crossing, the speaker addresses her daughter, “little whip     study the map,” reminding her, that “every step     is a prayer     for the impossible.” And, “To understand a map is to shrink the world; to plan; to color.” In the “hot and thick forgetting” necessary “to survive this nightmare so American/where you count coins/you do not have,” numbers serve strategic and therapeutic purposes. Counting the prayers of a novena as her fingers move along the beads of a rosary is a meditative act that joins her to “a line-/age of burdened beasts”:

At its most ambitious, Villarreal’s number play provokes a radical rethinking of past, present and a mostly unknowable future. The effect is a surrealism born of political critique:

Villarreal offers two epigraphs, one drawn from Frantz Fanon (who describes the “bestiary” to which the settler will always assign the colonial) and the other from Gloria Anzaldúa, the great Chicana theorist of la frontera, that border zone Anzaldúa calls “nepantla, a Nahuatl word meaning tierra entre medio.” For Anzaldúa, Latina liminality is always queer, always about displacement, and thus always also precarious. Sedimentary glints of Anzaldúa’s and Cherríe Moraga’s groundbreaking 1981 collection, This Bridge Called Our Backs, sparkle throughout the layers of Villareal’s poems. (Bridge has just been issued in its 4th edition. I attribute my own coming-to-consciousness as a young white feminist in large part to this book’s urgent, necessary gathering of the voices of radical women of color. Written two or even three waves later, Beast/Meridian reflects Villarreal’s very personal internalization of these voices.)

Perhaps most importantly for Villarreal is Anzaldúa’s word desconocida, untranslated in the epigraph, but sensed through the poems: the (feminine) condition of being an outsider, unacknowledged, unknown, unknowable. “Nothing            an immigrant’s /daughter does is intelligible,” writes Villarreal, “nothing an/immigrant’s daughter does is defensible.” Counting, naming, organizing, and praying are strategic, critical responses to the symptoms of oppression, but none can singly attack the cause itself. An intersectional portrait of these symptoms emerges — the cancer that attacks her abuela, the mold that “knocks out the house’s teeth,” the poet’s own “antlered illness,” “suspended mid-run” — and points the reader to Villarreal’s proposed solution. In the mode of her muses, Audre Lorde, Frida Kahlo, Cecilia Vicuña, and Ana Mendieta, Villarreal runs full tilt into her own biomythography. In a “halo of beasts,” Villarreal recasts in animal form herself, her immediate relatives, preceding generations, and historical figures such as La Malinche. Taking Fanon at his word, Villarreal imagines the regenerative potential of turning beast. Speaking as Malinalli (one of the nicknames of La Malinche), she explains both her ancestor’s infamous betrayal of her people and the creation of Mexico itself as effects of conquest: “and so this illness    begins of a violation/this country begins of a violation in the dark between seas.” The poet/translator becomes the avenger of the violation to which she was accomplice:

riches    hide among deer    disappear into

the forest   where reunited     we will spill

Villarreal’s mythopoetic mode will not be for all readers at all historical moments, but it works for this reader at this moment. Beast/Meridian sits by my bed with Les Guérillères, Monique Wittig’s 1969 visionary novel of women warriors, breasts and teeth bared, lusty voices raised. Villarreal looks to artists who spill their own blood. She explicitly links the poem about her hospitalization to Frido Kahlo’s 1946 painting, “Wounded Deer” or La Venadita, in which Kahlo sutured the image of her own face to an antlered stag punctured by nine arrows:

An arresting, animal hybrid — two-legged and four-legged, domestic and wild, male and female, thrashing and calm — Kahlo’s image (coincidentally owned by a Houston collector) speaks to Villarreal, “a daughter bound by/trouble   is a wilder grief.” In the stuttered “another/another another,” Villarreal interlocks her story with that of other [email protected] who have already survived, or are still working through the pain of what Anzaldúa called the herida abierta, the open wound of the border. Correctly applied, Villarreal suggests by example, a red-hot poetry can cauterize such wounds. 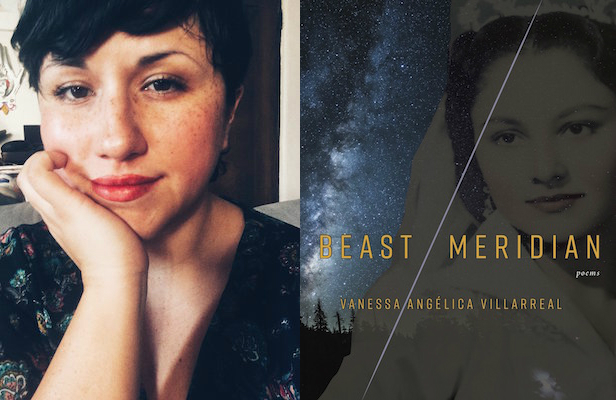