If I start by telling you that the Wild West outlaw Billy the Kid dies at the end of The Kid, Ron Hansen’s newest novel, you cannot complain about spoilers. Historical fiction is perhaps unique in being exempt from having to supply the reader with morsels of the unexpected to keep their appetite keen. We don’t read these books to find out what happened — we read them to better understand why Thomas Cromwell helped his king to murder his wives, or how Shostakovich managed to survive the ravages of Stalin. We want to know how these people felt; we want to inhabit their minds and their world in a way that conventional nonfiction does not allow. I’m fairly sure I never would have wanted to read a factual book about Billy the Kid, were I not familiar with Ron Hansen’s skilful characterization, which I discovered in Hansen’s most popular novel The Assassination of Jesse James By the Coward Robert Ford. The novel is an elegiac meditation on the burdens of both possessing and desiring fame, written in a prose style that is both lyric and precise. The protagonists of its title — the ultimate spoiler — are portrayed sympathetically, in a manner that deftly highlights their complexities and contradictions.

Though subject matter might suggest that Hansen’s most recent novel intends to mine similar ground, its opening sentence makes clear that, in narrative terms at least, he is employing a different approach: “You’ll want to know about his mother, she being crucial to the Kid’s becomings.” The line seems more spoken than written, partly because the reader is being directly addressed, but also due to the use of dialect. This effect is reinforced by sentences lacking their initial pronoun. (“Hardly ever did hold a job for any length of time,” or “Was Jack who urged the Kid to leave his lodgings in the Star Hotel.”) But this use of an oral register is more the exception than the rule, and the result is a sometimes inconsistent narrative mode that, for the most part, is a pastiche akin to dime store novels that spread the legends of the Wild West. Hansen’s prose does sometimes elevate to a Cormac McCarthy-esque style, which for all its lyric virtues, isn’t in keeping with the book’s primary register:

The frozen fescue grass crackled under the hooves of the Kid’s horse. His Colorado saddle and doghouse stirrups creaked whenever he shifted his weight. Off in the distance there were galleons of shock-white cumulus clouds gathering in the wide skies cerulean harbour, and their azure shadows floated over the flatlands.

In keeping with its pulp progenitors, The Kid presents Billy’s short, eventful life in a linear fashion, showing his progression from happy child to penniless orphan, then to a stealer of clothes, from which he soon graduates to horse thief. Both the narrator and Billy absolve him of any blame for his criminality, the former declaring “it was his undoing that in his aloneness and loss he fell in with a wild and vice-laden crowd,” while Billy excuses his actions by saying “I feel like I was never given the scope to do other than. Been making my own hard way with few means available to me.” The same forgiveness extends to his early murders — the first is presented as an act of panicked self defence, the second as a justified act of revenge. Even the killing of a kindly, trusting jailer is presented as wholly necessary, despite the fact that Billy presumably could have merely wounded him. Billy says: “I liked Jim Bell and did not want to kill him. But it was a case of have to!” After this, he rides out of town singing a Spanish waltz “about a flying swallow, worn out and tossed by the wind, looking so lost and was nowhere to hide.” It’s hard to tell whether this is meant to reflect how Billy sees himself, or whether it’s just in keeping with pulp conventions, in this case that of the lonely, misunderstood outlaw forced to roam the land.

It may be the case that Hansen’s research indicated that the Kid really was such a victim of circumstance — but it’s slightly dull to have a main character so lacking in agency. There are few moments when he seems anything more than “innocence, flair and helplessness conjoined,” as one character describes him. In the first section of the book, there are several references to the Kid’s dreaminess, but this is only alluded to, rather than shown. It is only at the end of the book, when Billy is dying, that the reader is given full access to his consciousness. But the novelty of this means that what should be a profound moment instead seems overdone:

With each quitting of an organ or process there came a greater liberation, an aliveness, an awareness of never having been so real. Seeing himself on the floor and the chaotic concern around him, he felt affection for all of them, felt pity for who he used to be, but he was overwhelmed by his new fluidity and increase, his ever-greater sense of wonderful love and limitlessness, having now what he’d always wanted but couldn’t ever name.

The Kid’s most interesting moments hint at a connection between pulp fiction and his own identity. When asked what he really wants, he replies: “to belong. To be liked. To be famous. To be feared.” Another compelling moment is when he says that the gun battles make him feel “the most complete I’ve ever felt.” Billy’s identity, much like our own view of him, is shaded in what Walter Noble Burns, in The Saga of Billy the Kid, would later call “a purple glamour of romance.” I don’t think Hansen is going as far as to suggest that Billy is in some ways affected by his future legend, more that The Kid has read too many stories about gunfighters. After he speaks of putting “dastardly gunplay” behind him, Billy admits to directly quoting “from one of Dawley’s Ten Penny novels.”

Despite its problems with characterization, The Kid is an enjoyable read. The dialogue is frequently comic; Hansen clearly relishes writing lines like: “talk don’t cost nothin but air, a scrape of the hind leg, and a jupe of the head,” or describing someone as “so crooked they could hide behind a corkscrew.” But ultimately the book feels both over-researched and under-imagined. Virtually every character, however minor, is given unnecessarily large amounts of biography; Hansen feels the need to inform the reader of trivial details such as that a canvas nosebag is called a morat. Ironically, what’s lacking are all the things that research cannot offer, but which fiction is supposed to supply. 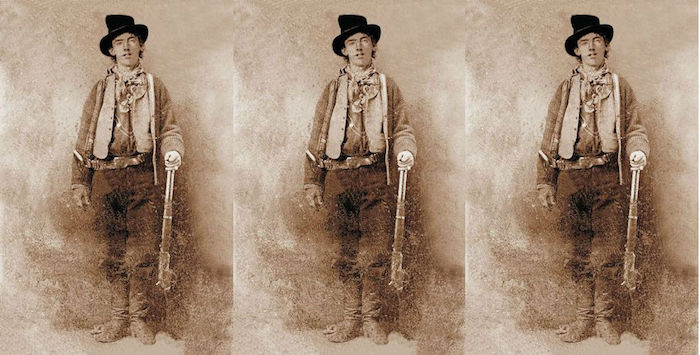