The first memoir by Amy Krouse Rosenthal, who died on March 13 at age 51, uses the word death only once. I know this because the endpapers include a list: How Many Times Certain Words Appear in This Book. “Cool” appears 22 times, “really” 69, “awkward” and “weird” both 6. “Love” gets 78.

Encyclopedia of an Ordinary Life is Amy Krouse Rosenthal’s 2005 memoir, which alphabetizes her thoughts and experiences to tell the nonlinear story of her life, including lists, charts, and timelines. The book functions the way one thinks, with visuals and asides, non sequiturs and “see also” cross references directing us on tangents. Years before social media exhausted the minutia of our lives, Encyclopedia exposed the magic in the mundane. “I have not survived against all odds,” Rosenthal writes. “I have not lived to tell. I have not witnessed the extraordinary. This is my story.”

The book’s strength is in its specificity and universality. There are the commonplace facts, paired with Rosenthal’s personal stories and quirks. “Very few individuals are able to walk by a parked limousine without comment.” We learn that she tears into packages haphazardly, never bothering to find a seam (see: “Opening”). She pretends to buy a real magic wand for her kids, only to regret the whole scenario when it’s proven to be a fraud (see: “Magic Wand”). She recounts the awkwardness of using new words (see: “Capricious”). It is a collection of the unbidden thoughts that enter one’s mind before falling asleep, while driving, while waiting in line.

Rosenthal writes about being a writer, though glosses over her jobs and publications. Life, here, is not what one accomplishes, but the actual work that’s created and the moments that lead to it — the collaboration with a friend, the daily menu of the coffee shop, the authors that inspired her. The book itself is a master class in writing, proving the effectiveness of brevity, wit, and honesty. Not exactly killing your darlings — the whole thing is basically a list of darlings — but of just including the good bits (the whole thing is also basically a list of good bits). Rosenthal manages to be both intelligent and inexpert, showing that this whole pursuit — of life, of writing — is hard for everyone.

Encyclopedia shows us the many ways to define a life. The entry “Childhood Memories” is a chronology from birth until the loss of her virginity, which marks the end of childhood, interspersed with tables like “What My Childhood Tasted Like,” and “Things That Confused Me for Much Longer Than They Should Have.” The section “Lows” gives a timeline of Rosenthal’s worst moments, from “Age 3: Friends Christy and Tommy move away,” past “Age 24: Ellen killed,” to “Age 37: Leave CD case containing favorite CDs on the security belt at airport.”

It’s important to note that this memoir by no means covers the whole of a life. A cross-section, certainly — sex, parenthood, art, melancholy, coincidence, coffee, winking, dessert —but not a chronicle of birth to (untimely) death. Rosenthal wrote it when she was not yet 40 years old, and went on to author more than 30 beloved children’s books and last year’s Textbook Amy Krouse Rosenthal, “not quite a memoir” in the form of a textbook. (Rosenthal was nothing if not high concept). It is ludicrous to think that her life was complete at 39, or even at 51, when it ended. As she has written, her first word, and perhaps even her last, was more.

I came upon Encyclopedia by accident. In my nearly-empty cubicle in my first job in publishing, there was one book on the shelf not published by my company. It was unread and unrecognized by any of my colleagues. I flipped it open and couldn’t stop reading — part of the book’s appeal is that it’s infinitely skimmable, accessible from any page. I had never read a truer book, real in the way that I have experienced life, with all its contradictions and silliness and meaningful license plates.

Over a decade after I first read it, Encyclopedia is still like making a new friend, entry by entry, truth by truth. Yes! I think, as I read how vending machines make her anxious and how she never writes down an order number. I also love butterscotch but never seek it out! One line in “Lacy Undershirts” almost defines the book, and me, and perhaps even the whole of the human condition: “Being yourself seems like the most effortless thing in the world — duh, who else are you going to be? But it’s deceiving, tricky, a summons laden with meandering and failed attempts — and then at last, so wondrously simple.” Even Rosenthal’s birthday, April 29, resonates, the same date a college friend of mine was killed in a car accident. See also: “Meaning.”

When I came upon Encyclopedia at 22, as a young writer, I didn’t know books could be funny and random and nonlinear. What’s more, I didn’t know that normal people could have memoirs. Like Rosenthal, my life has been lucky, if boring. I had a happy childhood; I have never battled addiction or had a near-death experience. Both of us “did not live in poverty, or in misery, or in an exotic country.” I grew up, went to college, and got an office job in New York. I never even studied abroad.

It had never occurred to me that my life was interesting, let alone worth writing about. With Encyclopedia, Amy Krouse Rosenthal legitimized my own ordinary life. It is worth living as is, without accoutrement. I didn’t need to backpack through India or start a multi-million-dollar business; I could have a job and friends and make small mistakes and have brief successes, and that all of it is worthwhile. It is okay to be ordinary.

And yet, Amy Krouse Rosenthal was by no means ordinary. Two weeks after she got the book deal for Encyclopedia, she asked two other Amy Rosenthals (no relation) to present her editor with purple irises as a thank you. She anonymously left change for strangers and asked them to send her postcards explaining what they did with it (see: “Change”). Her Modern Love column that ran last month, “You May Want to Marry My Husband,” was featured on the Today Show and has drawn more than 4.5 million readers online. In a remembrance in Publishers Weekly, her longtime editor of children’s books says simply, “Amy Krouse Rosenthal was magic.”

And that’s the true genius of this book. An ordinary life can be just as rich and magical as any other. Is it in the mundane — the “Handwriting,” the “Tuesday Night” — that we find our truest, most extraordinary selves. (Mine: I will sing karaoke at any opportunity and I spent much of my childhood not believing in dinosaurs. It took me until college to realize that my natural hair color isn’t really blonde.) Our own lists of quirks and joys and sadnesses and failures are the beautiful things which connect us to one another. Rosenthal shared her extraordinary ordinary life, so that I could begin to find mine. 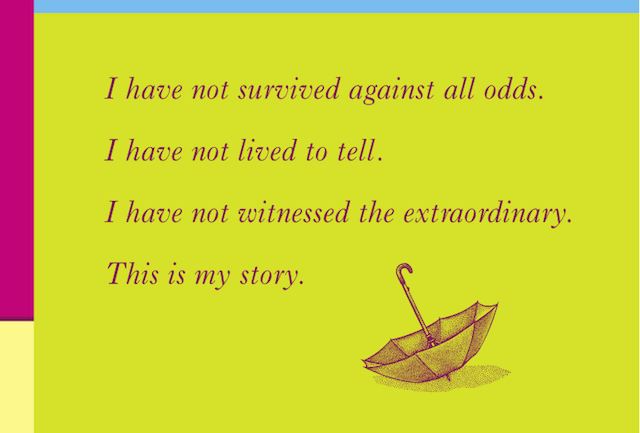