While audiences across America belted the lyrics to “Shallow” alongside Lady Gaga’s fledgling rocker-chick Ally, a very different image of pop stardom opened to mixed reviews. Brady Corbet’s Vox Lux, the new pop freak-out film, offers a yin to A Star is Born’s yang. Velvety and at times vulgar, Vox Lux contains a startling blend of stylistic elements, marrying impressionism and bombast with allegory. It succeeds in spinning an audacious and provocative pop tale, and one that, incidentally, stands in opposition to the mushy earworm of a moral offered up in A Star is Born.

At the center of Vox Lux’s universe is Celeste — as with Ally, the single name is a seal of pop repute — who early in the film survives a mass shooting that leaves a bullet lodged in her neck. While her Staten Island community grieves, young Celeste (played by Raffey Cassidy) collaborates with her elder sister to produce an uplifting song that soon goes viral, catapulting her to fame. The dawn of Celeste’s stardom transpires over several years leading up to September 11, 2001 and comprises the first half of the film. We then flash forward to 2017, where we find an older Celeste (a ferocious Natalie Portman) as a full-blown pop star, yet one who’s mangled by vanity and addiction. Unfolding over the course of one day, the film’s latter half follows Celeste preparing for the launch of her new album, called Vox Lux. She’s had some rough years — rehab, tabloid scandals, a lawsuit — and her team hopes her new tunes will represent something of a reformation.

Like Corbet’s first feature, the 2014 Sartrean character study The Childhood of Leader, Vox Lux is interested in probing the complex origins of someone who will go on to wield cosmic influence. As a teen recovering from her injuries after the shooting, Celeste is willowy with an opaque expression. After her runaway hit song, she takes on an uncouth agent (Jude Law) and begins to shop herself around to managers. She practices dance routines and goes out clubbing with her sister. Though her past trauma is mentioned only in passing, she can’t fully escape it: the bullet embedded in her neck has left a long keloid scar that she conceals beneath turtlenecks and thick ribbon chokers, each of which inspire the uneasy feeling that, if someone were to untie them, her head would topple off.

Corbet maintains a certain distance between the audience and Celeste. Voiceover narration from Willem Dafoe fills gaps in Celeste’s story with a removed, fairy-tale tone. “In the beginning, she was kind and full of grace,” Dafoe says, by way of introduction. From the start, Celeste seems special, exceptional in an enigmatic way, demonstrating preternatural insight and composure. When the school shooter enters her classroom, Celeste is the sole student who attempts to negotiate with him; and later, when dealing with her manager and agent, she manifests business drive and maturity beyond her years. Corbet leaves us wondering whether these distinguishing qualities are good or bad — warm and admirable or cold and worrisome. Either way, she’s a shimmering standout.

The effect of all this is to give Celeste a mythic quality, to leave us projecting things onto her and wondering whether they’re true. This is similar to the way we treat celebrities in real life: playing pretend friend or armchair therapist, beholding and interpreting their lives from afar. Corbet understands that, in America, playing make-believe with famous people is an essential game. It provides a respite from reality. “That’s what I love about pop music,” Celeste articulates at one point. “I don’t want people to think too hard.” Pop stardom may prove painful for Celeste, shaping her into a lonely and egocentric monster, but it also allows her a release from her past traumas.

There’s an even darker side to this fame game, one that Corbet conveys by aligning Celeste’s celebrity with mass violence. Along with the shooting that caused her rise to stardom, the September 11 attacks oddly align with a pivotal night in Celeste’s life. Her subsequent loss of innocence mirrors that of the nation. And when, on the day of her album release, still another brutal attack becomes linked to Celeste, the reciprocality of celebrity and terrorism — and the tendency of both to scandalize and stir up the media — is thrown into sharp relief.

Like messed-up megastar twins, Ally and Celeste both arrive in an American era in which shallow celebrity literally reigns. Yet the characters couldn’t present starker interpretations of contemporary pop stardom. The polished punk Ally is a naturalistic vision, unsullied by hair dye or cosmetic surgery (her big schnoz is the subject of limitless interest). When Cooper’s lame-duck country star Jackson Maine makes Ally his muse, he’s drawn to her aura of realness, believing that it will transmute into an authentic musical message. “If you don’t tell the truth out there, you’re fucked,” he advises Ally before a big show. “If you don’t dig deep into your fuckin’ soul, you won’t have legs.”

In Vox Lux, Corbet envisions a young woman who begins her journey literally without legs — bedridden and wobbly after trauma leaves her nearly paralyzed. Pop music, in which she finds diverting solace, serves as her anesthetic, giving her legs while giving her life. Celeste may grow into a colossal, thrashing presence, endlessly bratty, motor-mouthed and impossible to contain, bedazzled with gems and swathed in metallic latex, but she’s also other-worldly, an unrepentant escapist invention.

The film’s final scene is a lengthy spectacle, playing out Celeste’s Vox Lux debut concert performance for far longer than most movies would dare. We watch as she performs song after song, each nearly in full, before an arena of fans who shriek and grin. Like them, we’re both dazzled and numbed. 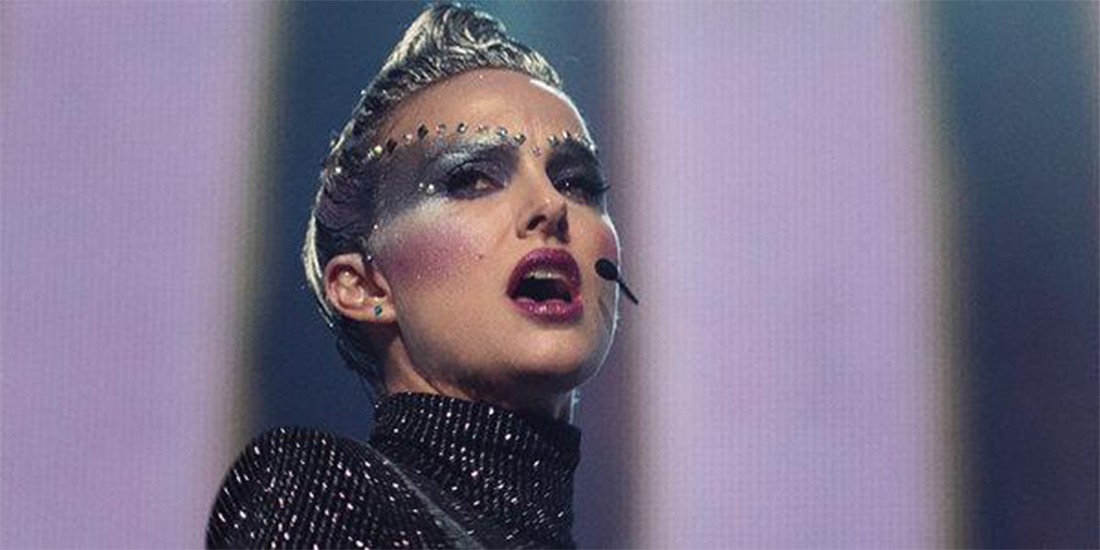