I have felt the electric thrill of watching José Eugenio Sánchez (Guadalajara, Mexico, 1965) read at several poetry festivals in Ciudad Juárez and Tijuana. The poems he incanted were more than firecrackers; they were authentic conflagrations of joy and union with the audience who were there to hear him. Whilst so many other poets at such events rely on the captive audience of high school yawners, university literary students, functionaries, or other poets attending the same festival, Eugenio Sánchez was privileged with an audience of admirers.

In Tijuana, at an underground art gallery, he performed his poems over the rock groove of the band Un País Cayendo a Pedazos and he briefly resuscitated that tradition of music, audience, and the communal bread of power-chords in a space only a few blocks from gringos entering the red-light district. It worked for Ferlinghetti, Patchen, Kerouac, and Rexroth with Be-Bop augmented chords and saxophones, and it worked for Eugenio Sánchez with musicians exuding the enthusiasm and the sloppy skills of MC5.

Indeed, Eugenio Sánchez was then, and still remains, a poet on the margins of his country’s canon. No need to repeat it, but apart from disparate voices like that of Castillo Udiarte, Tijuana’s Godfather of Counterculture, or Salvador Novo and his wicked humor and homoeroticism, and Guadalajara’s bad-boy, Ricardo Castillo, much of Mexican poetry is very chiseled, refined, exquisite, and replete with allusions that would boil the brains of the typical MFA student in the States. This is not a put-down about Mexican poetry — far from it. I prefer the feverish strophes in Muerte sin fin by José Gorostiza as opposed to much of the Anglophone poetry culled for anthologies. This is simply an observation that Eugenio Sánchez was tapping into something different: a bit of Vachel Lindsay and his communes with students in Midwest high school gyms; Mayakovsky, Eusenin, and a poetry like swigging from a bottle with your neighbor; our favorite footpad Villon; young Jean-Arthur flinging lice at the passersby; ancient Archílocus sharpening his barbs; even Jim Morrison and his scream of the butterfly, while he whirls and leaps in Bacchanalian release.

This is all cause for celebrating the deeply talented translator Anna Rosenwong and her publication of here the sun’s for real, selected poems, published in a handsome edition by Autumn Hill Books of Bloomington, Indiana. The cover art itself, with comic-style images of handgun, a robot from 1950’s sci-fi, sun, and bovine, remind one of late indie label SST album covers, perhaps the Descendents, all quite appropriate. Rosenwong has really rolled up her sleeves for this book, and the acknowledgements reveal the years it took to realize this bottle-rocket (their first collaborations began in 2006).

Rosenwong, after her deft work with Rocío Cerón, once again displays her prowess as a translator. Poems by Eugenio Sánchez tend to unravel quickly like a solid coil of liquid fire, breathless, crackling with wacky humor and references. They are like images from a Jim Dine and she is able to carry over that energy into English. I have always enjoyed Sanchez’s “happiness is a warm gun,” and in Rosenwong’s version we read:

Until the hit-list ends with the crack: life was invented by money. All of the poems use a lethal commixture of lyricism and witness, with humor and a punk-like celebration of burning down the ghetto. Such an example can be found in the poem “the music of clattering canines.” In this stab at a Hard Times type of childhood, Eugenio Sánchez quips:

The collection’s bonus track comes in the form of the chapbook-long “climax with double cheese: exterior somewhere in the world a subtitle appears.” Rosenwong had previewed the poem as a small plaquette published in a limited edition by Sin Papeles in 2015, a series curated by David Shook and myself. Rosenwong tackles the poem with gusto; it’s a poem which mixes and mashes all of the worst film clichés possible: a raging storm, a super hot chick, a pizza delivery boy, urban flooding, urban destruction, low camera angles, doggie-style, an entire ocean swishing into the filth, darkness…all of that finally does “spin in the gyre/of a city-sized toilet bowl.”

One would be foolish to not grab this collection. It doesn’t get more fun than this, with regards to poetry, as much as it doesn’t get all the more serious too. The sun’s for real, as are the global heat waves, blazes in California, clogged drainpipes, bombs, terminator machines, and the innumerable dead from humanity’s inhumanity. Joy! 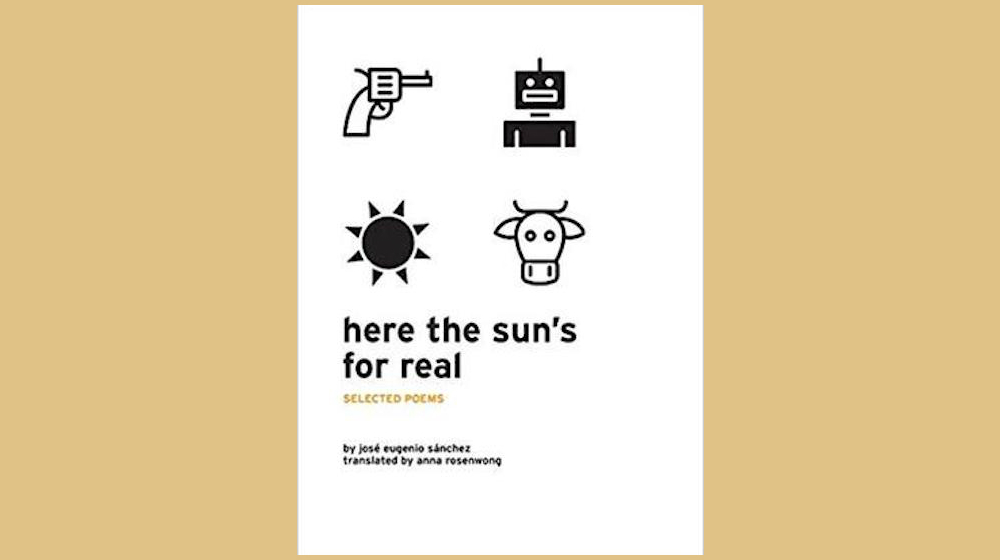