I first met Willard Spiegelman in Los Angeles when he accompanied me on my many interminable drives from Santa Monica to my offices in Hollywood. He wasn’t there physically, but he certainly was a presence: his voice, narrating the Poetry Course from the Teaching Company — all 30-odd hours of it — was my constant companion for a month.

I had seen the ads for the Teaching Company’s College Courses in newspapers and magazines, but I didn’t actually hear one until I saw them for loan at the Beverly Hills Library and checked them out. I started with the amazing music courses given by Professor Robert Greenberg, and after I learned “How to Listen to and Understand Great Music,” and all about the lives of Mozart, Wagner, Shostakovich, and Tchaikovsky, I checked out “How to Read and Understand Poetry” taught by Spiegelman (which I see is no longer available in their catalogue — pity!)

I’d always loved my poetry courses in school, but there was something about Spiegelman’s enthusiasm that especially captured me. He spent a half hour on A. R Ammons’ “Beautiful Woman,” a poem that consists of the nine words “The spring / in / her step / has / turned to / fall;” instead of the usual chronological poetry syllabus, Spiegelman bounced around, grouping poems together, even if the poets were born centuries apart, analyzing Whitman in the same breath as Donne, William Carlos Williams in the same breath as Keats. I also loved his choices of poems and poets to discuss: plenty were familiar to me, some of my absolute favorites freshly analyzed, but there were numerous poems and poets I had never heard. All of this made my commuting in the Los Angeles traffic, where people get so frustrated they actually shoot each other — dare I say it — my favorite part of the day.

So when I read Spiegelman had come out with a collection of essays, Seven Pleasures: Essays on Ordinary Happiness, I immediately clicked “buy.” Quite honestly, it wasn’t just his poetry course — despite having worked at it for many, many years, “ordinary happiness seemed” to have eluded me. Maybe he could help. The $19.95 was certainly a lot cheaper than the $250 an hour I paid my shrink. Spiegelman’s top seven picks for happiness in his book are reading, walking, looking, dancing, listening, swimming, and writing, activities available to even the most neurotic of the neurotics (i.e., me and my colleagues in show business).

“Happiness,” he writes, “has received less respect and less serious attention than melancholy.” In this wonderful collection, he gently but firmly guided the reader on how to experience happiness without Lexapro, Wellbutrin, or even a great deal of money.

I can’t say that this book actually banished my melancholic humors, but I certainly had a great time reading it. And every time I walk around a new city, and I travel a great deal, I constantly think of Mr. Spiegelman and his instructions.

I think the thing I most enjoyed about that book is that Spiegelman is a not a self-help guru, but an erudite college professor. I quickly understood his authority came from a lifetime of experience, a lifetime of teaching and dealing with students, and a lifetime of actual living. And he actually seems like a “happy” person. I’m not sure I know any writers I can say are happy.

Given the fact that his generation was “the last children born before the ubiquity of television,” I assumed Spiegelman was at least my age, and with his latest publication, the deliciously titled, Senior Moments Looking Back, Looking Ahead, I realized he was, of course, “getting on.” I can think of no one better to help me adjust to getting older than the man who (tried to) teach me to be happy.

While not as didactic as Seven Pleasures, this delightful book of essays reflects on his six decades of teaching and writing through personal tales of a “senior citizen who has reached his biblical allotment of three score years and ten,” covering cities he’s lived in, cities he’s visited, books he’s read and re-read, and the anticipation and inevitable disappointment of a college reunion. A summation of memories, it makes the radical argument that aging can actually be a pleasure.

Speigelman’s mother, he writes, “recognized no difference between the Normandy invasion and a trip to the supermarket.”  In Dallas, the car rental woman who finds he’s arrived to teach English says, “Yew’ve cum down heah to teach us English? Whah, yew don’t even talk lahk us!” The Dallas weather: “As the days shorten, as first the nights and then the days themselves begin to cool, the human spirit emerges from hiding. We start to breathe, and to think, again, following the summer’s oppressive languor.” Spiegelman writes his prose with the gift of a poet, or at least a poetry professor, and with comic timing: “A great twentieth-century intellectual once said, ‘I read poetry because it saves time.’ That was Marilyn Monroe.”

It skips all the clichés about aging: no doctor’s office, aging parents, children who never call, limbs and organs that no longer function. It’s not that book.

Perhaps my favorite section was when he visited the Cloisters in Manhattan to hear the sound installation by the Canadian artist Janet Cardiff:

In 2001, Cardiff made a recording at Salisbury Cathedral of Thomas Tallis’s mid-sixteenth-century polyphonic motet Spem in alium for forty voices. She lined the walls with curtains and blankets to control the sound and to deaden the space. Nineteen additional children augmented the forty called-for singers. All fifty-nine musicians wore lavaliere microphones attached to cables that ran to a truck outside Then, combining some of the children’s parts, she reduced the audio tracks to forty. […] At the Cloisters’ Fuentidueña Chapel, a limestone Spanish apse from the twelfth century, the work was “performed” continuously throughout the day over a three-month period. This was the first time the Cloisters had hosted any contemporary art, although the essence of the Tallis polyphonic piece is hardly modern. The whole experience combined the old and the new. It was actually neither old nor new. Instead it offered a taste of eternity.

I feel Senior Moments offers up the same. 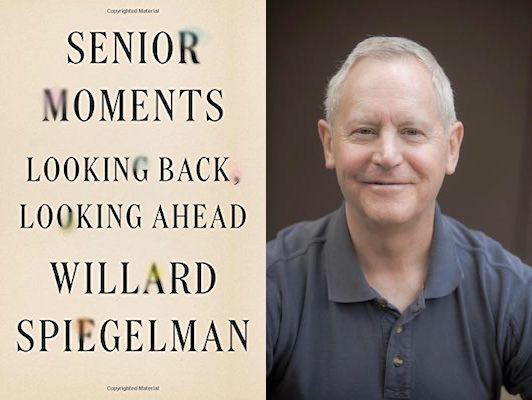