Another closed gallery, another exhibition I can only see online. This time, Catherine Opie’s “Rhetorical Landscapes” at Regen Projects. A broad image of the main floor of the exhibition shows a series of beautiful photos of coastal Louisiana’s swamps hung on the walls.  In the middle of the room are a set of large monitors displaying motion collages. You can click through larger images of all of the photographs and see videos of the collages as they form with cut-out pictures falling into place. Opie calls these “political collages,” and you quickly see why: the intent throughout the exhibit is a play on the political “swamp” that Trump vowed to drain — and that he has instead (surprise, surprise) only filled to overflowing with hate and corruption.

A message, yes — a rhetoric, definitely — but more than this. The swamps, the swamps themselves. The unexpected beauty of this coastline. The surprises of color, of texture, of density. An owl blending into the background of white, decaying, moss-covered wood. The stillness of the waters that look like brushed velvet. The scaly ridges of an alligator’s back centering a profusion of rusty weeds and pale green lily pads.

Don’t listen to me. Go there.

But, of course, you can’t. Not just to the gallery, but also not to the swamp. I mean, you could, but perhaps you shouldn’t. Yes, some people live there. Some people know how to navigate these backwater byways. Some people can live in an environment that seems at times more fearful than beautiful. Some people appreciate the beauty, and the danger.

What are we doing here, though? What is Opie doing here, having photographed these remote places, places that she herself might not belong?

Susan Sontag once wrote that “There is an aggression implicit in every use of the camera.”  She didn’t realize when she wrote, now decades ago, that cameras would one day be everywhere, not just invading our privacy, but colonizing our subjectivity, demanding that we use them to take pictures of others and ourselves, a ceaseless conglomeration of selfies for which we willingly pose and then upload. We’ve built our cameras into our phones — and the technology of reaching out to touch someone else is more often than not the technology of self-monitoring, self-styling, self-display, documentation, and surveillance. We know this.

What does Opie’s camera know?

There’s more than just the exotic locale here, more than the aggressive eye of a prying camera rendering these remote wilds accessible to us. There’s a whispering in the photographs, even digitally offered on my computer screen. Their remoteness, however doubled at this time of closed galleries, cannot silence the susurrus of the silky waters, the breezy swaying of the moss implied in its slanted growth, the hooting of a barely seen owl. Exotic, sure. But something else.

I’m waiting for it.

Sontag again: “Like sexual voyeurism, [the act of photographing] is a way of a least tacitly, often explicitly encouraging whatever is going on to keep on happening.” Sontag initially means this negatively; the documenting power of photography might catalog, for instance, atrocity as a way to motivate concern, but latent and implicit in the image taken — in its sheer interest as a photographable subject — is a valuing of what is, of what is interesting enough to photograph, even if, as Sontag puts it, what is photographed is “another person’s pain or misfortune.”  We are voyeurs of damage.

But let’s keep going with this metaphor — “like sexual voyeurism” — a metaphor that suggests other possibilities, other ways of seeing, other difficult pleasures. It suggests, too, something a bit attractive. And also something shameful. In Opie’s case, in her images of the swamps, I can’t help but ask: what about the “status quo” of these starkly beautiful and deadly places? The images call to us to appreciate their muddy beauty, yes, but also perhaps to leave them alone? To look but not to touch?

I hear the susurrus again. I’m waiting for it to become clear, to tell me something I can understand. And then I realize that the aggression of Opie’s camera lies not in her intrusion into these remote areas, but in her photographs’ reminder that we are destroying them.

Look up a satellite image of New Orleans and its suburbs, and you will see, in the west, a stark line where the city spread ends. The “civilized” has a boundary, a distinct stopping point, where water begins — a line beyond which it’s not possible to build. People still live in the swamps, some on boats, some in houses built on stilts, but they are few and far between. As they should be. This is not an area capable of sustaining large human settlements.

Now look up satellite images of the Louisiana coastline from two or three decades ago, then find one that’s more recent. (You can start here.) You don’t need to know much more about what coastal erosion looks like. You do need to understand, though, why it has occurred, how climate change raises sea levels, how the funneling of rivers to facilitate trade and commerce prevents the redepositing of silts that replenish the swamps and wetlands. The people who live here won’t survive such changes. The plants and animals, the flora, the fauna — they won’t survive.

The dangerous beauty of these swamps won’t survive the world we have remade in the image of capitalist accumulation.

I look back at the pictures. Opie’s photographs surprise me with their colors. I was expecting soaked greens, sopping and stringy grays, muddy browns of still water — and they are there.

I was not expecting the ruby reds, the sparkle of blue-greens, the rustiness of the pale pinks.

The suggestion of purple, the hint of a bruise.

I grew up in New Orleans. I’m not going to lie: I hated Louisiana. I hated the way my body felt in the heat, in the humidity. I hated walking outside in the summer and immediately being covered in sweat. I hated the bugs, the mosquitos, the wasps.

Mostly I hated myself in Louisiana. I hated myself because I was taught to hate myself — a young, odd-looking, gangly, cross-eyed, porto-queer kid. Too femme. Insufficiently masculine or sporty. A readily identifiable faggot. South Louisiana in the 1970s and 80s — not a good place for a little gay boy like me.

The place and my place within it merged into a miasma of bad feeling — a self-loathing that I steadily projected outward as a defense mechanism. This place just sucks. It’s awful. It’s not meant for human habitation.

It is destroying me.

I was partially right. It wasn’t meant for habitation for someone like me. But was it — is it — meant for anyone?

I only developed different feelings for Louisiana in the aftermath of Katrina, watching family, friends, others all but abandoned by a government that didn’t care about the poor. And the area is, indeed, full of the poor. I was one of them. I started to identify with the abandoned. I began to see my connection to this place, even if I felt I had to leave it all those years ago. So few at the time I grew up in Louisiana thought that I was worth preserving. So few thought the people who lived there in the aftermath of Katrina worth preserving.

As with so much of her work, Opie’s camera registers the bruise, the damaged, the abandoned: this time, the landscape, the ecologies, the natural systems — the sparkle of blue-greens, the rustiness of the pale pinks — the swamps that have been abandoned from care because so few have thought them worth preserving. They have been abandoned to wealth, to commerce, to shipping, to the fast flows of capital trumping the slow movement of muddy waters.

What becomes precious to you when you realize others want to throw it away?

Are we listening to the swamps?  Can we hear them in Opie’s pictures?

The pictures are already aesthetically beautiful. Their proximity to the motion collages makes them rhetorically demanding — posing questions, addressing us, requiring response.

In one motion collage, guns rain from above, piling up one on top of the other, machine guns, automatic weapons, pistols, and then a torn and tattered American flag gently falling and crowning the heap of guns. In another, a range of images — hot dogs, an upside down ice cream cone, a flag-draped rocking chair, a raised fist, the US women’s soccer team, a MAGA-capped white boy shutting the door to his home, a poster with the motto “science is real”—all speaking to the contradictions and incommensurabilities of our culture. Another: images of the devastation of climate change; a Barbara Kruger “I shop, I am” sign; a man bound; an atomic explosion. In yet another: images of political figures from the current presidency, along with Vladimir Putin and Kim Jong-Un, requiring us to reconcile them with the pictures of natural beauty on the walls surrounding these collages.

The statements on the Regen Project website suggest that the monitors on which these collages play look like giant iPhones. In a way, then, Opie’s collages are selfies of our collective soul. To me, at my digital remove, the screens seem like those large monitors one encounters in airports, displays promising direction, guidance. But to where?

Photos do not, by themselves, change anything. Again, Sontag: “What determines the possibility of being affected morally by photographs is the existence of a relevant political consciousness.” The collages provide that consciousness. They are the necessary complement to the dangerous beauty of the swamps. They are reminding us that we are destroying the swamps.  They are shouting at us: you are destroying these swamps. 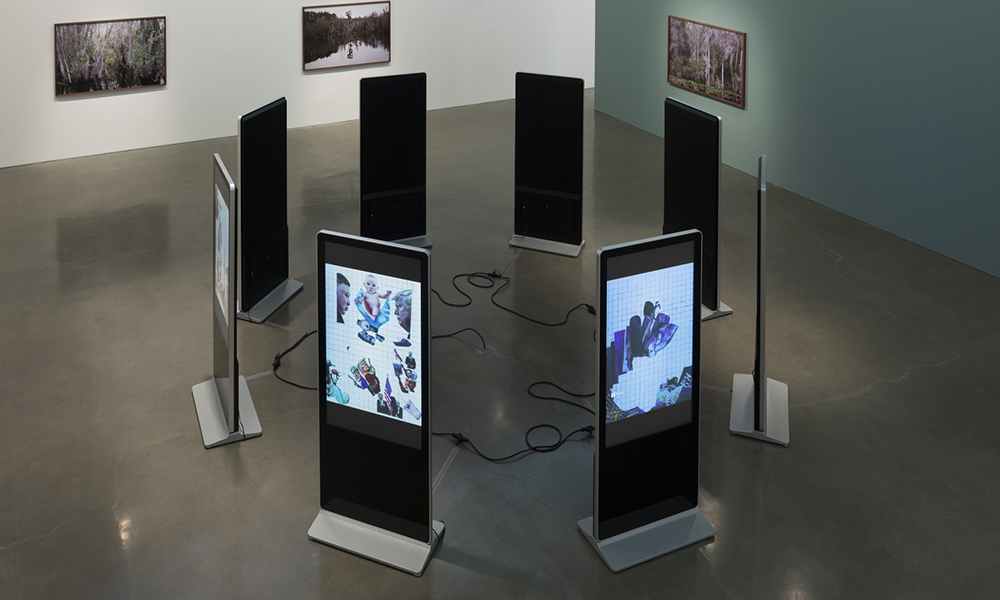