Fashion exhibitions often overstate their own right to exist. “Genius,” “revolutionary,” “iconic,” they shout at us. They clamber to call their creators “artists” as often as “designers.” In a banner year for fashion exhibitions, there remains a self-consciousness that fashion, especially when it enters the museum, is an inferior cultural artifact.

In the Metropolitan Museum’s annual summer exhibition, attention turned to the work of the ruthlessly experimental Japanese designer Rei Kawakubo, in Rei Kawakubo/Comme des Garçons: Art of the In-Between. The exhibition drained curator Andrew Bolton and the Costume Institute of their usual theatricality, instead imagining what fashion would look like if it primarily belonged to the museum or art gallery, rather than a transplant from another industry. Likely due to the designer rather than the curator’s impulse, Art of the In-Between banished the custom mannequins, dramatic lighting, immersive soundtrack, exotic scenographic set designs, and vitrines typically so seductive at these exhibitions. Instead, the space was a blend of experimental department store (very like those Kawakubo implements to sell Comme des Garçons elsewhere) and a modern art museum’s white cube like those fetishized a few blocks south by the Museum of Modern Art. An even, direct light, in fact, far brighter than even the conservationist standard for museum textiles, implied that this show had no shame about its relationship to the spaces of commerce, even as it simultaneously encouraged one to regard the clothing as sculptures or fixtures in a puzzling installation. Kawakubo’s clothes have an antagonistic relationship to functionality; they are often utterly useless as wearable, functional objects for the human body. This symptom may make them ideal objects for an art museum, a space for looking and preserving, rather than wearing and using. One left the Met feeling as if their mind had been sucked clean, not only of emotional associations but also the possibility of any figurative or referential allusions. Instead of the academic 19th century nostalgia and romance encouraged by the cabinet of curiosities of 2011’s Alexander McQueen: Savage Beauty, with Art of the In-Between, the Met achieved a minimalist, aesthetic ideal no matter the garments’ quixotic embellishments. It put clothing in the harsh light of Frank Stella’s haunting refrain: “what you see is what you see.”

Instead of waiting to be invited into the museum, we might suggest that fashion invent its own. It did just that in October, when the dual-site Musée Yves Saint Laurent in Paris and Marrakesh realized this strategy more elaborately than ever before across 4,900 and 43,000 square feet respectively. With scant mention of his fashion peers, both sites cast Saint Laurent as a singular original, a “creative genius” who channeled the diversity of world culture (from Spanish bullfighters to African queens) into a fantasy of revolutionary womenswear without ever leaving Paris. Opening almost a decade after the designer’s death and only days after the passing of his business and life partner Pierre Berge, the Musée materializes an insistence that Saint Laurent (and the brand they built in his name) be not only remembered but canonized, as cultural history and a kind of national (and international) patrimony. In a gallery that presents a “chronology” of outfits inspired by different historic periods, from antique drapery to beaded flappers, the museum proposes Saint Laurent not only as an artist operating beyond the sociology of fashion but, more interestingly, as a kind of historian and cultural critic in silk, synthesizing and forecasting for the culture within which he lived. Ending in a room filled with garments influenced by painters, from a jacket beaded with Van Gogh’s Sunflowers to the iconic Mondrian sheaths, we are meant to recognize these canonical painters and poets as Saint Laurent’s true peers, the company he shall keep in the cultural pantheon.

One feels the glow of sainthood nowhere more strongly than in the designer’s former office, where his cluttered desk, work tables, bookshelves, bulletin board, and even his bulldog’s bowl, have been preserved as if the flesh-bound man has only just left the room. One feels the hush and pulse one hopes to find when visiting the studio Brancusi beside the Pompidou, Wordsworth’s cottage in the Lake District, or Judd’s loft in SoHo. In a documentary crafted by the foundation, entitled An Eagle with Two Heads, the Musée (not unlike the Taj Mahal) inscribes one last love letter — an ambitious challenge in the face of mortality and, possibly fiercer, fashion’s reputation for passing fads.

Attending to the living and the beloved, these two examples could have benefitted greatly from a greater degree of critical distance. One wonders how a sharp, yet still reverent, post-colonial critique would complicate our regard for Saint Laurent? How would the Art of the In-Between shift if organized without Kawakubo’s oversight and consent?

Come fall, similar anxieties unfolded quite differently in New York, where, as if to excuse themselves if it didn’t all work out, the Museum of Modern Art framed the problem as a question, with Items: Is Fashion Modern? MoMA’s first fashion exhibition since 1944, Items assembled 111 objects judged to represent “paragons of design.” Here, fashion became not about the vision of any one individual, nor a conduit for a specific cultural or historical investigation, but rather evidence of a modernist, quasi-utilitarian value system: a tidy inventory of modern dress supposedly free from shifting tides of style or taste. Flying by the logic of Alfred Barr’s torpedo timeline, Items theorized a closet of objects — like the “little black dress” or Levi’s 501s — that have been and will continue to remain in fashion, never going out of style. This fiction is wish fulfillment for those who fear fashion. Its central conceit repressed the possibility that, like Art of the In-Between or hundreds of shows before and after it, Items might embrace any one designer and celebrate them as a genius among mere mortals. This revisionist curatorial impulse would be laudable, if MoMA was not already well known as the ACME factory of artistic genius myths, at least when it comes to painters and sculptors. This is a fine ideal for fashion exhibitions at large, but on MoMA’s sixth floor it camouflaged an institutional double standard. Why work so hard to make fashion approachable and everyday in the same space usually reserved for vaulting painters and sculptors to irreproachable heights of cultural importance and intellectual complexity? Within the bigger picture of MoMA’s long history of hierarchies, it was hard not to see Items as reifying MoMA’s long-standing role in policing what’s hot and what’s not in a modernist canon, ensuring that fashion remain seated, if at all, near the bathrooms.

Items foregrounded fashion’s shared, social, and anonymous dimensions, the clothes that are common and familiar to us all rather than coveted and (even less) owned by a rich few. Whereas Yves Saint Laurent’s “Le Smoking” tuxedo was moody, revolutionary, and one-of-a-kind in a black box in France, in New York it became one sober point in a trend marching across an evenly lit white hall. Again, this promises more as intent than it offered in practice and delivered in affect. In fact, the most memorable and provocative moments in Items came not in the everyday garments that grounded its thesis, dull-by-design standards like the brief, bra, or wooden clog, but rather in the idiosyncratic spin-offs conjured by signature designers, like the blue jumpsuit by Richard Malone or Issey Miyake and Fujiwara Dai’s “A-POC Queen” ensemble, 1997.

We go to museums to be amazed, to see something unusual or out of the ordinary. Why should it be any different when we are going to see fashion? Instead of Antonelli’s sober accounting, the fashion exhibition must do something other than tell us what we already know about clothing by buying and wearing it. Items brought little more revelation, critical understanding, or intellectual celebration to fashion than a visit to several well-stocked midwestern departments stores would. What if MoMA understood clothing as it just did Rauschenberg, maybe not the work of a singular genius, but as a nexus of provocative collaboration and interdisciplinary influences, a cultural form on the front lines of emotional, technological, and social development? One hopes that we won’t have to wait another 50 years to see. 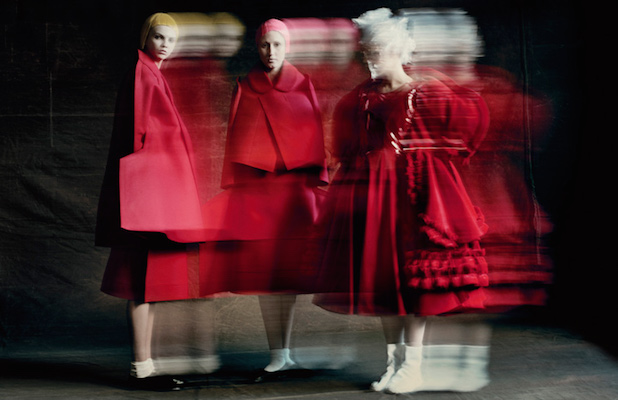