My friend Alex invented a dinner party game called “Missing Ingredient.” It hinges on a copy of Southern Living’s Our Best Recipes, a gift to Alex from her grandmother. The cookbook is musty and faded from the era of Jell-O and casseroles, cans of cream of mushroom soup, and ingredients that eased the job of the housewife. Some nights after lingering over aperol spritzes in the Austin heat, Alex will bring the cookbook out and read the ingredients of a recipe save for one item, and we all try and guess the last, missing component. Inevitably, our guesses come back to ingredients like gelatin, frankfurters, Wonderbread, or other items that now seem unseemly and outlandish in the terrain of contemporary kitchens that are more likely to be stocked with kale, alternative milks, and quinoa pasta. The recipes send us into howls of surprise, laughing at how the zeitgeist of food changes so rapidly from one decade to the next.

Tamar Adler, the ever-exacting cook and writer, recently released a new cookbook called Something Old, Something New that seeks to revise these very same sorts of retro-kitsch recipes. Well, not the very same recipes from Southern Living, but similarly long-out-of-vogue dishes that seem like myths of bygone culinary eras. Even as someone who went to culinary school for a spell, I don’t know how to make most of these dishes, or even know what they consist of (admittedly my studies were in South America, where I was more likely to learn how to cook guinea pig than Steak Diane). With dishes like Baked Alaska, Oysters Rockefeller, or Oeufs en Gelée, Adler wins readers over with an encouraging voice that eschews preciousness. Her recipes are hardly strict or precise. They are approachable and acknowledge her rare quality among her class of chefs: frugality. Consider her take on the classic Coq au Vin, which traditionally entails drowning a bird in an entire bottle of wine. Adler cuts this quantity in half, advising instead to gather the ends of empty bottles that have turned. Her approach could be read by some as sacrilegious, while others might see it as unsentimental and pragmatic. She writes in her introduction that as she pored over many of the original recipes she reworked, she “repeated an eventually maniacal mantra: This will be delicious when made with less butter, less wine, less time, less cost!” Her methods renounce frivolously over-taxing work. “Chicken in leftover wine” is both humble and elegant, scrappy and virtuous.

The word most associated with chic restaurants or cooking shows is “elevate,” but Adler makes the case that we don’t need to fancify foods to appreciate ingredients. In the case of turnips, Adler gives a gratin recipe and waxes philosophical about the main ingredient: “There is no definitive answer to the question of why the children of one era are depressed by the turnip while the children of another are invigorated by it. It only adds to the mystery that in every age there is a fruit that used to be a vegetable, a vegetable that used to be weed, a weed that used to be medicine, and an ingredient served only raw and fresh as dawn that used to be cooked as though it were a dried bean. And some animal bit considered firmly inedible that was lately a gourmand’s highest delicacy.” She told me via Skype: “My tendency is to elevate the lowliest of things. It’s a weird desire to express justice and give the underdogs a leg up.” She reminds me that her egg patée recipe is just overcooked eggs and cheese ends.

My curiosity was piqued by a recipe for “Braised Lettuce on Toast.” I have only ever had lettuce one way: raw. But salads aren’t the only vessel for us to consume a good head of romaine. I was secretive about the recipe I was testing when I invited two friends to try this concoction. I felt like a parent who didn’t want to reveal to her children what she has made for dinner for fear that the little ones wouldn’t even take a nibble. On top of the taboo of cooking a raw vessel for vitamins, the recipe calls for anchovies (a personal delight for me, but iffy for others). It was quick to prepare: I cut the romaine into wedges and braised them with butter and bit of vegetable stock, made a garlic anchovy butter, slathered it upon some long rafts of pumpernickel toast, then topped the bread with shrunken and wilted greens and a dusting of lemon zest. The appetizer was heavenly: light, tender, a symphony of flavors revealed in the lettuce as it mingled with the floral lemon zest, brackish anchovy, and bite of garlic.

Adler’s approach to cooking and food is unequivocally intuitive. One can sense reading the recipes that her intimate knowledge of food and the way it reacts and performs has coalesced into a true instinct. When I spoke with her, Adler sharply noted that many cookbooks cultivate a “dependency on the recipe instead of understanding that [one is] learning something.” So while you might be hard-pressed to find yields on many of the recipes, or precise measurements of salt (when salting pasta water her edict is to flavor it so it tastes like the Dead Sea), or be unsure what constitutes the “very good olive oil” she instructs you to use, her approach is born of a far more philosophical and far-reaching goal than simply putting a meal on the table. Adler is trying to reacquaint you with your senses as you cook, to build your instinctual understanding and tendencies until they distill themselves into aptitude — even some talent. (In fact, the only disappointment in the book is that the multi-course meal menus and wine pairings feel at odds with its humble and (mostly) economical perspective.)

Adler’s last book, An Everlasting Meal: Cooking with Economy and Grace, rang with poetic prose that was nevertheless succinct and compact, and Something Old Something New is no different. She catches readers with poignant lines between recipes like, “whatever it is that makes beef tartare barbaric also makes it intimate,” or “The farmed clam […] tastes as sweet and saline as its savage sibling.” Her writing is much like her cooking, and Adler hasn’t given up on those ingredients of economy and grace. Perhaps what is most notable is Adler’s immunity to diet fads. It is rare to go out to dinner with a friend without some restrictions in mind, to the point where vegetarianism seems positively antiquated. Aside from when she was nursing her son who had allergies to dairy, Adler does not swerve away from ingredients that now could be called guilty pleasures. She is one of the few who still embraces a good loaf of bread, admires a remarkable cheese, does not shy from pasta. She respects the food she cooks, as evidenced literally by her recipe for “A Respectful Omelet” wherein she restores dignity to a food so ubiquitous we’ve forgotten it can be made with green beans and parmesan cheese inside, alongside a wedge of lemon, and eaten for dinner rather than breakfast.

It is easy to forget, and just keep on forgetting, what potential there is in cooking with certain ingredients. We stop questioning how a dish or vegetable is prepared, what names we once called something by. Considering Adler’s recipe for Alligator Pear Salad, I was perplexed as to what this fruit might be — until she explained that it now goes by the more dignified pseudonym “avocado.” I will never see the ribbed texture of the skin of an avocado the same. In her essayistic asides between recipes, Adler unravels the mysteries of dishes that are capped off with variations of à la: à la alsacienne (with sauerkraut), à la diable (deviled), à l’italienne (with noodles), à la vigneronne (cooked in grape leaves). And with this anthropological breakdown, I see that maybe this is the key to reinvention: that we can revive something when we better understand its name. A name is a way that something familiar can become foreign, and vice versa. The name of a dish is an origin story, that marks not just location but a point in time. Think of the Waldorf Salad, Crab Louis, Potage Billy By, Potatoes Delmonico, Chicken Kiev. All of these point to a person, a restaurant, a moment in time when they were born.

This book asks more than just what the mechanics of a trend are; it reveals just how easily we “[are] prisoners to [our] age” in the ways we conceptualize food. Oysters are a case study of what once was poor man’s food and now is for the rich. Kale of course has become a staple after years of no one seeking it out in stores or farmers markets. When Adler and I spoke, she was most invigorated and moved by the idea that “we get tied to the idea that the mores of our age are right, which is preposterous because we don’t believe that the mores of the last age were right. Our mothers or fathers or [whoever] learned that to cook was one thing. And we, who often learned a little bit from them, think it’s another series of things. The idea that [my mother’s] wisdom is less relevant now that I’m a grown person makes me so sad. As a mother, I think about wanting to be respectful, not treating the past like it’s kitsch and funny.” Time passing makes what we did look ridiculous and out of fashion, and fashion can be cruel. Adler reminds me that “it’s not of now, but it’s good now” and we will lose something if we move to quickly that we forget it. We have become accustomed to traveling the world as we eat Chinese, Thai, Italian, Peruvian, even go to restaurants that center around particular provinces of these culinary terrains. But how often do our meals allow us to travel in time as well?

Remove the outer leaves from the romaine, saving them for soup. Trim the bases, leaving the head(s) intact and leaves connected. Cut into 6 thin vertical wedges, connected at the base.

Make anchovy butter by pounding the anchovies to a paste with the garlic paste, then mashing in 4 tablespoons of butter.

Warm a pan large enough to fit all the lettuce wedges. Add the remaining 3 tablespoons of butter. Once it has melted, add the stock, and fit the romaine wedges closely into the pan in a single layer. Salt lightly. Cook over medium heat for about 2 minutes, then turn all the wedges to another side. Scatter with lemon zest. Continue to cook, turning once or twice more, until the liquid in the pan has been absorbed and the lettuce is very wilted and tender throughout. Turn off the heat.

On a cutting board, slice each wedge twice across to make for easier eating.

Spread the toast thickly with the anchovy butter and top with the lettuce. Serve hot. 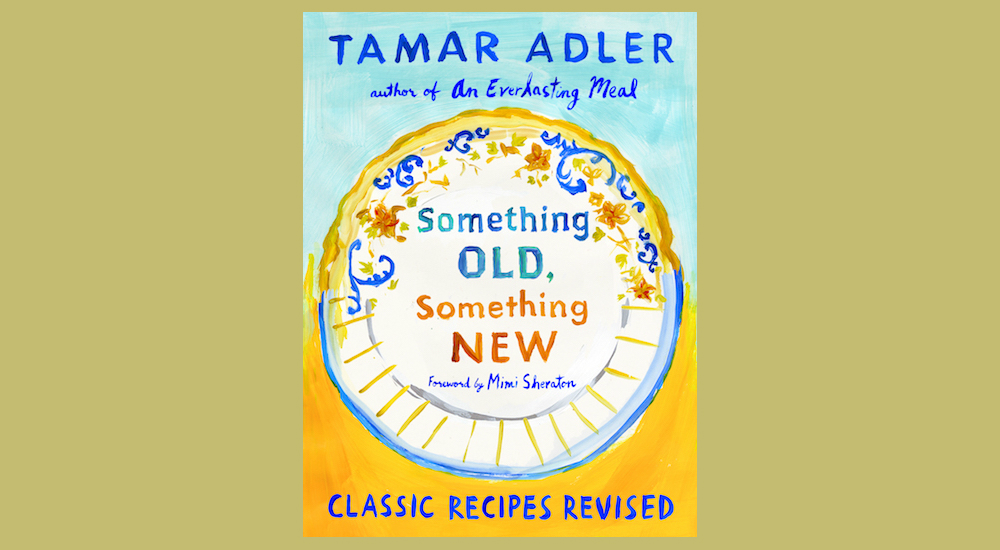