A Wonderful Stroke of Luck, Ann Beattie’s 21st book, is the work of a master storyteller at the height of her talents. In it, a young man named Ben attempts to make sense of his life in the years after 9/11 and after graduating from the prestigious Bailey Academy, a boarding school in New Hampshire. It’s a remarkable novel that feels so utterly real that it defies convention. It works the way life works, which is to say with misdirection and events that feel random but probably aren’t. It calls to mind, in different ways, both Stoner and The Secret History — which are, incidentally, two of my all-time favorite novels. Ben is particularly haunted by his former teacher, the monstrous Pierre LaVerdere, but the less I write about that relationship here the better.

As a longtime admirer of Beattie’s fiction, I did my best not to completely geek out when we happened to share an airport shuttle a few years ago at the Southern Festival of Books in Nashville, Tennessee. By that, I mean I completely geeked out. She was far kinder than she needed to be and we’ve stayed in contact. In February, she answered a few questions for me via email from her winter home in Key West, Florida. We discussed, among other things, the new novel, her secret talent for cooking, and the worst writing advice in the world.

ANDREW ERVIN: How did this novel originate? In particular, can you pinpoint how a character as original as LaVerdere comes to fruition?

ANN BEATTIE: I never create characters based exactly on people I know, though I’m familiar with his type from being in the academic world and hearing so many professors take a sardonic tone and/or pretend to have every answer that’s ultimately warped to their own preening purposes. It was as if he just emerged, named, and began to evolve faster than I could keep up with him. In revising the book, I added scenes in which the reader could see him functioning as The Teacher, but by then I was more than a little wary of him, myself. Even in my early draft, when he was less directly involved in the students’ daily lives, he immediately had a distinct personality. I didn’t know what he’d do, but his proclivity toward creating a version of chaos, masked as something else, was always apparent to me. As writers know, troublesome and troubled characters are appreciated, because they help to get things rolling.

As the book proceeds, LaVerdere gets more dangerous and isn’t only some rather imperious, sardonic provocateur. At least, though, I wouldn’t want to say those things that directly for attribution (then people think that’s only and all I intended). I made him less merely troubled and more troublesome — to himself as well as the other characters.

A Wonderful Stroke of Luck is your 21st book, which is astounding to me. What new challenges did you present yourself in writing this one?

Every book presents its own set of problems. When I started writing, I had only a vague idea of writing about someone at a place like Bailey, so I wasn’t challenging myself, or not challenging myself. Novels are exhausting, as we all know, though if that’s what a manuscript turns into, that’s what happens. I don’t plan novels out, so I don’t really think of new challenges, as small things inevitably trip you up and large things can work more easily than you’d expect (at least, in retrospect, when the first draft is done).

I will say that initially there were no chapters. I mean, no numbered chapters. It was hard to persuade me they should be there, but I caved. I think, though, that my initial feeling about the material was that it was all on a roll — it started rather quietly at Bailey, then gathered its own quick momentum, so I just kept going in a stream. I did find that when I was numbering, it made sense to drop some things and also merge two chapters, for instance — so ultimately, I suppose numbering was a good idea, to make the book tighter. The hardest thing to write was the last chapter. By then, I knew generally what it would be, but having just the right amount of dialogue between them, and not too much, was hard to do.

I love the title, which derives from a quote by the Dalai Lama. Can you tell me a little bit about how you arrived at it?

I couldn’t come up with a title. One working title emphasized LaVerdere, but it’s not his book —  though that man might run away with anything — so that was counter-productive. Other things sounded good, but not as titles — they were too directive. So, on my birthday, still fretting, my husband took me to dinner and somehow we started thinking about the Dalai Lama. And, yes, this was before drinks. Lincoln pulled out his phone (no, that’s not a usual dinnertime routine) and started scrolling through statements the Dalai Lama had made. We both lit up when we came to “a wonderful stroke of luck,” because it seemed that what the characters wanted in my novel — the yearning that was sometimes not articulated, or the way it was hard for some of the characters to connect, or even to be sure of what they really desired — was just right. Yet, since he’s the Dalai Lama, the statement also had a particular resonance.

What’s your secret talent that few people know about?

Like everybody else, I’m a good cook. Last summer, with simple ingredients that would have allowed me to make dinner in ten minutes, I went so far as to make lemon verbena tea with leaves from the huge plant in the garden (first thing I plant, every year), then steamed scallops over the liquid. There’s no better way to avoid writing than cooking.

Got a favorite recipe?

8 small white potatoes cooked in the skin, equal amount peeled, cooked sweet potatoes, put in blender with white pepper (1/2 tsp?), dried thyme, fresh rosemary, and half a box of Swanson’s unsalted chicken broth. Cook on low. Then dump in leeks and fennel sautéed in good olive oil and 1/2 cup sake. Pour in the rest of the chicken broth before removing from heat. Cook that, grind pink peppercorns over it, and offer a little pitcher of medium cream, if anyone wants to stir that in.

Who’s the American author you wish more people would read?

Peter Taylor. I was lucky enough to know Peter, and he had — and has — many fans, but he still isn’t well known out of the South. Library of America published his collected stories a couple of years ago, and I wrote the intro. I’d start with The Old Forest.

What’s the best writing advice you’ve ever received? And the worst?

Best (about the manuscript of my first novel, Chilly Scenes of Winter), from my friend David Wiegand, a great editor: “I took out the first forty-nine and a half pages, so you begin with this sentence, halfway down page 49. See?”

Worst writing advice: “You have to write every day.” 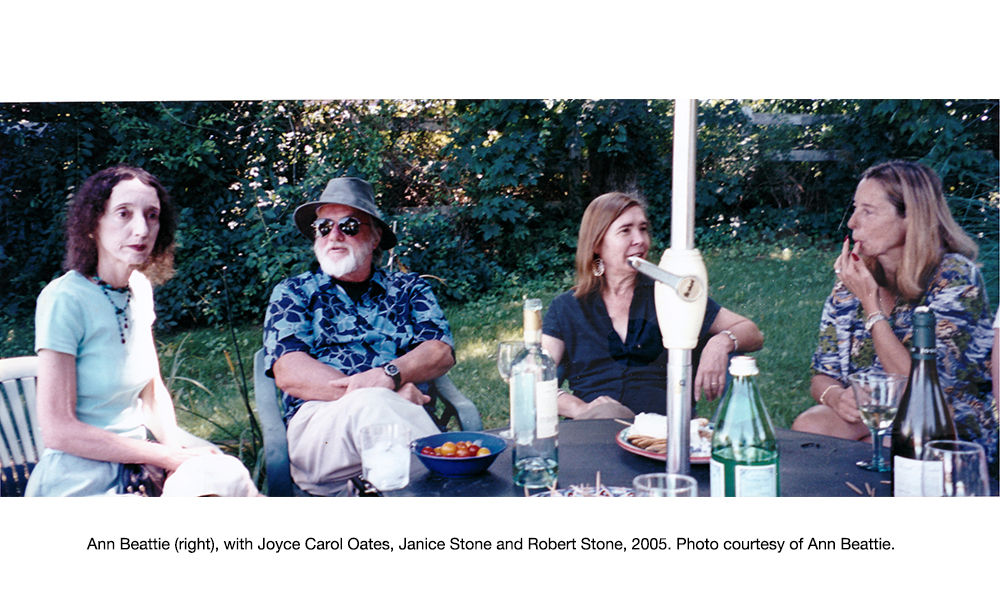