Thanks to the publication over the last three years of Isabel Fargo Cole’s translations of several of his shorter works and one longer novel, Wolfgang Hilbig’s writing is becoming better known to an English-speaking readership, as are the basic details of his life: he wrote his work, which also includes poetry, essays, and other fiction, during breaktimes while doing tough manual jobs, and defected to the West several years before the fall of the Berlin Wall.

His narratives may often focus on what it is like to be on the receiving end of the machinations of the East German state during its middle and later years, but Hilbig is not interested in bearing witness to these experiences as narrowly characteristic of that place and time. His work seems to take a much longer view — something that László Krasznahorkai articulates in his introduction to Sleep of the Righteous:

Whoever reads Hilbig quickly understands that nothing ever ends, and that there is specifically no end for the Germans, because those ordinary days contain within themselves a force: base, frighteningly motionless, dark, lurking in the depths, a monster that has not collapsed, that did not disappear.

Krasznahorkai seems to suggest that whatever monster was birthed by the DDR is still with the Germans today, and perhaps not only with the Germans. What monster, engendered by some political formation before the DDR, lurked in its depths, having likewise “not collapsed,” not disappeared? The Females, centering as it does on what is in one respect a febrile investigation into the immediate prehistory of the DDR, asks this question.

It does this by means of a bold conceit: its nameless narrator, having begun his story by spending a number of pages describing fruitless attempts to ogle the women who work at his factory through a grate in the cellar where he spends his days, tells us that just after he is let go from the factory, he finds that “all the females [have] vanished from town.” At first it is not clear quite how literally to receive this statement. Females (and women; in The Females this is an important distinction) disappear entirely from the narrator’s day-to-day encounters, but then so, it would seem, do virtually all human beings. The narrator instead spends his time in solitude, trying to recall the narrative of a pornographic tale he wrote years previously, imagining how he would justify its content to a court presided over by a woman, and looking for traces of the vanished females in the rubbish tips and trash cans of his town, the latter sometimes seeming to him to contain disembodied parts of the female anatomy:

I dug my arm into one of the trash cans. And I thought I felt hair, a fleshy hairy mound in the midst of the can whose contents massed around my wrist. Just as though I’ve managed to swallow my own fist, a labial circle closes, firm and sucking, around my lower arm, bent arm wrapped around the neck of my shadow, pressing the head of my shadow to my face, gingerly I’ve closed the fingers of the hand on that arm to form a fist, and for days to come, on the palm of my hand and between my fingers, I’ll find the smell of the heat that my fist clutched.

The Females is a queasy read, and passages such as the above can seem to contain overtones of the “apocalyptic masculine hysteria” the literary critic Amanda Demarco has discerned in some of Hilbig’s work. This kind of passage represents only one of the many textures to be discovered in The Females, however. The predominant one — impossible to give a sense of with only brief quotations — involves an extremely intricate soldering of one trope to another such that they form long chains which intertwine and must be unpicked from each other. Another way to put it might be that they form waves which in their interactions create complex patterns of interference.

For example, the novella opens with a sequence that ensures that we learn to associate women with eyes, visibility, and occlusion, as well as with the authority wielded by the state (which in East Germany was above all the authority to watch). Crucially, it is the German word Frauen which belongs in this chain in the original text, and not Weiber, the term used to designate “females.” Weiber is the anchor of a chain of tropes having to do with animality, rubbish, history — and hair. In other sequences, things are less clear cut, and it can seem sometimes to be Hilbig’s intention to overtax the interpretive impulse, to make it hard to work out if the trope we are considering is supposed to be associated with women, females, or with yet some other figure. Indeed, so much interpretive labor is required at certain moments that the chains of tropes snake off into obscurity, and the signifiers readiest to hand float free of whatever might be said to be their original referents, instead coming to designate new, as yet unthought concepts (in which respect The Females is an extremely distant cousin of Urs Allemann’s Babyfucker, a book that achieves a similar end by very different means, and an even more distant relative of Genet’s Funeral Rites).

Much of Hilbig’s effort here appears to be directed towards delivering us to the border between the thinkable and the unthinkable — which is also the frontier of the monstrous, since the unthinkable and the monstrous are overlapping concepts, as Richard Kearney and others have shown. The Frauen come to function as the mask of a thinkable monstrosity: the “coldest of all cold monsters” that is the state. The state is presented here in an ambivalent fashion. On the one hand, a state functionary — an administrator at the Workforce Steering Office who, of course, is a woman — is portrayed as visiting psychic violence upon the narrator when she tasks him with collecting trash instead of writing (he tells us that “if I ever managed to feel that I possessed an identity, if I was able to develop any nebulous ideal of my I, it was only through experiencing myself […] in writing”). But on the other, the suffering generated by being the subject of such an oppressive regime does not seem to silence the narrator; instead, it seems to inspire bouts of eloquence, as is evident in passages such as the following:

to the state it seemed obvious that I owed it boundless, eternal gratitude. For ultimately it had created me…oh, there’d been a progenitive act of incredible intensity: outstretched in sincerest devotion my mother had let Father State bestride her in all the vigor of his beauty; the grandiose symbol of rebuilding rose precipitously before her and plunged into her body and to celebrate how she’d been favored, a sea of flags unfurled, the Party’s young guards waved them over the rite of this clean coitus; I was immaculately conceived and stood spotless amid the life that was being rebuilt, my brow was steeled, I appeared in the shape of hope …

It is hard to ignore the ecstasy of complaint here, which is only intensified by the fact that, as throughout The Females, the narrator’s language finds itself more than equal to the task of thinking through the destructive effects that the state has on the lives of its subjects. Something that can dwell so comfortably in the light of reason cannot really be a monster.

Real monsters live in a region beyond language and thought. Although they are by no means monsters, it becomes steadily clearer that this is also the region inhabited by the Weiber. They seem to flee in the face of language and figuration: late in the novella, the narrator is forced to conclude that the tropes which seemed to be clues to their presence (the hair, the trash, and so on) are nothing more than signs of their absence. The narrator searches for them tirelessly, but finds no trace of them beyond vague intimations of their departure.

In the end, the book feels like it turns on a riddle: how can the females have vanished if they were never visible in the first place? The antinomies of their disappearance can be reconciled if they are thought of as being like darkness: darkness can’t be seen, and vanishes when a light is turned on. The females come, in their way, to designate a kind of historical darkness that was present in the DDR, but perhaps not only there — a darkness that still exists, in the most troubling way, even when the light is turned on.

Near the conclusion of the novella, the narrator at last recalls an historical moment at which the females were actually present — which, indeed, is the moment when they came into being in the first place. Although it has been clear since near the beginning of the book that an abandoned concentration camp in which the narrator played as a child enjoys a privileged but enigmatic status in relation to the females, it is only at this late stage that we are allowed to understand that the existence of the females — and, indeed, of the women — stems from a specific moment of abjection which took place there:

Yes, I felt I must describe the females who had lived in the torment and simple solidarity of these barracks, where they were called females, because women staffed the guard details. That was where that honorific was invented: the females.

Knowing that the females were present once, if only in the camp, and feeling emboldened by this knowledge to believe that they remain objects potentially accessible by thought, he nevertheless finds himself entirely unable to substantiate their continuing existence, even if only to himself. He finally seems to understand that he has become like someone trying to solve another type of riddle: attempting to picture, say, the redheaded man in Daniil Kharms’s fragment “Blue notebook #10” who has no hair and, lacking mouth, nose, arms, legs, stomach, and spine, is not a man either; or, more compactly, like Alice when she tries to “fancy what the flame of a candle is like after the candle is blown out.”

Is the camp where — and when — the monster lurking in the depths of the DDR was born? Yes, in a sense. But things aren’t as simple as that. Hilbig’s point is not that the horrors of the DDR have their origin in the unthinkable violence of National Socialism, partly because in fact this is all too thinkable: we know it happened; we know where and when, for the most part, and who exactly did what. Hilbig is directing our attention to something really unthinkable, of which the separation into women and females is a particularly shocking local instance: that no moment of history can be weighed for its consequences by those living in its stead. The narrator seems to understand something of this when he says “If the females don’t exist, then I need not either.” If our understanding of history is so circumscribed, then so too is any claim we might make to be living in the present. 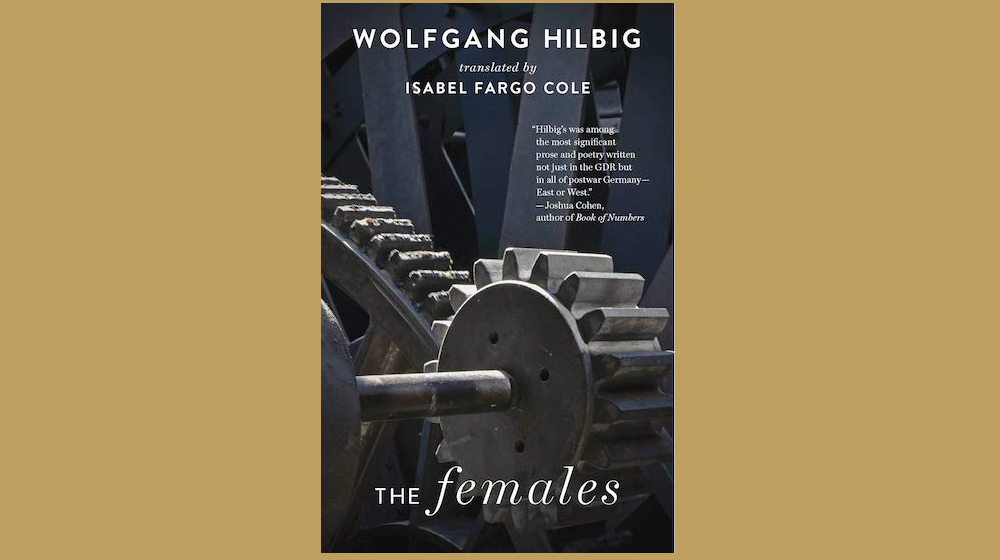