In Cruising Utopia: the Then and There of Queer Futurity (2009) the late José Esteban Muñoz describes the idea of utopia as not a paradise of stasis, but a site of constant “becoming.” Citing the potential of futurity as layered within past and present times. Muñoz writes that dreaming, failure, and queerness should be encouraged to realize something beyond normative culture’s narrow definitions and Capitalist fictions.¹

On the weekend of June 1, coinciding with Pride month, the Queer Biennial opened at different venues across Los Angeles. Hosted at NAVEL, LAST Projects, Tom of Finland House, and others, the multifaceted exhibition takes on the theme, What If Utopia? Despite this conceit, of an exhibition of over 100 artists, 75% of the participants are male-identified, and the largely white curatorial team of nine people includes only two women. In a space supposedly defined by “queerness,” the exhibition still falls prey to the same heteronormative, patriarchal systems it presumably attempts to subvert.

The official opening was preceded by a $75, exclusive VIP meet-and-greet with keynote speaker, John Waters. The line for general admission stretched around the block at NAVEL, a Downtown, rich kid co-working space recently rebranded as a non-profit, suggesting a classist exclusivity antonymous to any kind of Eden. Since his final film in 2004, Waters has publically lamented an inability to continue making films cheaply and often illegally.² His rehearsed speech emphasized the need for artists to find “new material,” perhaps signaling an end to the camp and punk aesthetics which defined much of the 20th century. Behind Waters hung an ink drawing of a bearded man breathing a plume of smoke which says, “Queer witches practice ritual as resistance.”

A framed photograph with headphones by filmmaker and author Jamison Karon depicts two intertwined, white male bodies bathed in evening light. On the audio track, Karon sultrily intones an excerpt from his erotic memoir, How to be a Faggot (2017), “a juicy slice of gay life during the Obama years.” Karon’s description feels as tone deaf as the realization of the exhibition theme, as if the rights of LGTBQ individuals in America only suddenly have become jeopardized by the current administration or that past neoliberal policies weren’t also rampant with LGBTQ and other human relegations and exclusions, or even that hook-up culture, especially among cis-gay men, is inherently racist and transphobic. How to be a Faggot may be tongue-in-cheek, but this exhibition, in all its forms, feels remarkably Procrustean in its effort to pigeon-hole the capacity of either utopia or queerness.

Photography is abundant, with a particular focus on cis-male bodies in sexualized poses and regalia. Florian Hetz’s isolated close-ups of sculpted torsos, Santy Mito’s leather-harness’d Adonises, Luke Austin’s tired, softly-lit twinks or Lucas Castro’s image of an erect penis slick with pre-ejaculate — cruise free of criticality, re-enforcing the same gender, bodily, and racial roles which previous generations of artists railed against, or at least worked to subvert. Indeed, much of Utopia is at best, dick art, selfie-porn and Instagrammable priapic performance. Muñoz’s titular cruising does not actually romanticize queer, or even gay sex, instead the word is used to imply a metaphysical exploration.

At LAST Projects, viewers are encouraged to openly fondle Dorian Wood’s Trophy, a tangled profusion of “white people hair” mounted on wood. Not only does this explicitly address the racial objectification of POC individuals in its reversal of the classic white “Can I touch your hair?” misstep, but further indicates the superficiality of the more standard portraiture. The textural mass oozes outward like a Gorgon head held high, begging the viewer to consider the “othering” of the casual grope or glance.

Genderqueer artist Roy Martinez’s Untitled, a brick-wall motif on wood panel bearing gum and spray painted text reading, MI VIDA MARICA, recalls barriers both real and figurative, connecting the immigrant experience to the white walls of the gallery and the artwashing of neighborhoods. Martinez’s large neon handbills reading FUCK ICE and ABOLISH STATE-SANCTIONED VIOLENCE were posted around the space as agitprop interventions, reminding viewers that Utopia still has many real, tangible obstacles. Charles Rosenberg’s Out lies on the floor like a coffin, a pair of prayer hands emerging from the anatomical groin of stacked felt blankets. While a subtle, yet imposing work memorializing HIV, the poignancy is undermined by the crowded, salon style installation, abutting a small self-portrait by Gio Black Peter with the mouth cut out as a mock-gloryhole.

For all its claims to an international range, the Queer Biennial seems to draw specifically from the cosmopolitan: New York and Los Angeles, Mexico City, Tel Aviv and a smattering of Europeans. Truly global representation is hard to achieve in a vacuum. Notable is the absence of the many queer individuals who come of age and work in inland, rural locales, away from the more accepting urban centers with their trendy lifestyle brands and Topman department stores. Partly funded by the Israeli Consulate General, the exhibition encouraged participants to engage with an “imaginative, unfiltered, queerness.” Yet, if there ever was a failed attempt to erect a utopian society, with its genocide against Palestine, gross human rights violations, and rampant pinkwashing, Israel is perhaps the epitomic metaphor.

Mixed in amongst the emerging and mid-career faces are superstars such as Andy Warhol, Robert Mapplethorpe, Tom of Finland, and Don Bachardy. Rather than fleshing out the show as a historical survey, their respective Polaroids and etchings feel more like name-brand props on pedestals, an attempt to justify the contemporary’s reliance on age-old phallic imagery — further exhausted by the exhibition’s graphic design featuring a binary of Warholian bananas and cherries.

There is a meme circulating the internet wherein a Band-Aid labeled “queerness” hovers over a Caucasian arm with a scab marked “white fragility.” In a day and age when Adidas has a Pride-sponsored tennis shoe series (resplendent in pink triangles, the sign Nazi Germany uses to differentiate homosexuals and trans people, later re-claimed by queer liberation factions like Act Up) and hook-up app Grindr has its own digital magazine for the “Modern Queer World” — the word is rendered hallow, devoid of political potency when applied to the pervasive toxic masculinity of bubblegum, gay culture. After decades of separatism — something that Waters warned against in his opening remarks — queer calls for something more. We should not forget that it was not a six-packed cis-man who initiated the 1959 Cooper Do-nuts Riots in Los Angeles’s Skid Row neighborhood, nor the 1969 Stonewall Riots of New York’s Greenwich Village. We should not forget that queer is Victorian euphemism for “ill-fitting” or “odd,” and its re-claiming should celebrate true differences, deviancy, and resistance.

Utopia does not have lines, nor a VIP section. Utopia is not gendered, nor does it have sovereign borders. If the Queer Biennial does imagine utopia, “queerness is not yet here.”

The views and opinions expressed in this article are those of the author and do not necessarily reflect the official policy or position of the Los Angeles Review of Books. The Queer Biennial runs through June 30th, at different locales in Los Angeles, more info can be found at https://queerbiennial.org. 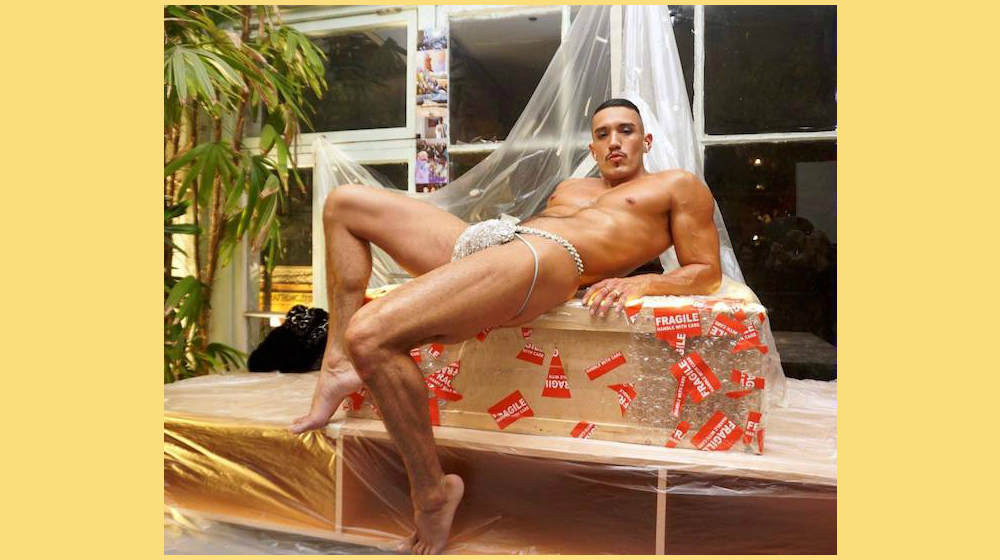