Depicting one man’s struggles with family, sexuality, and religion on two sides of the Mediterranean, this entertaining journey creates a space where war crimes come out of the closet and camp surrealism flirts with Christian sectarianism. The film tosses aside the genre conventions of teary confessionals and victim testimonies. Instead, surprise after surprise launch the audience through sexy dreamscapes and hilarious unanticipated encounters. We hold our breath, burst into laughter, then find ourselves stunned as shards of the subject’s shattered mirror reassemble. Familiar reflections suddenly stare back at us with a wink or glare. As the Teddy Award jury writes, “The strong emotional impact of the film is provoked by the alchemy of both the sharpness of the filmmaker and the ingenuity of the protagonist… we are reminded of the power in longing for a queer redemption.”

The film breathes new life into the literary genre of the anti-hero’s odyssey, tracing a living map of witty turns and returns, inward journeys, and cross-Mediterranean escapes, excavating a set of dark events and lurid fantasies in the turbulent consciousness of a Lebanese gay man. Miguel’s War will disappoint those looking for a hero’s journey from East to West, shame to Pride, repression to freedom. This game-changing new film is so much more than that. Instead, we encounter a lush fabric of tricks and teases.

The subject of the documentary, Michel Jelelaty, is an Arab Christian man in his 50s. Through the course of the narrative, we gradually learn that he had proved an easy recruit for the Phalangists militias in Lebanon. Phalangists were the historically fascist cousins of Spain’s “Falange Española Tradicionalista” who served as the militia enforcers of Francisco Franco’s reign of terror, blending authoritarian elements of neotraditionalist Christianity, patriarchy, and nationalism as they tortured and disappeared leftist and liberal sympathizers. Lebanon’s Phalangists deployed a similar agenda — their motto was “God, Nation, and Family” — and they came to aid the Israeli military in 1982 when Israel launched a devastating bombing raid, then invaded and occupied Lebanon. At the age of 19, Michel fell in love with his AK47-brandishing commander and lived a sexual experience with a rapist who had committed atrocities against women, Syrians, Palestinians, and leftists. Swimming in war’s macho-nationalism and upper-class arrogance, Michel develops shame and disgust for his mother (who was Syrian) and his yearnings (which were queer).

But Michel does not last. Experiencing a crisis of conscience, or maybe just rejected by the men of the Phalangists, he deserts the militia and heads to Spain, rechristened as Miguel Alonso. There, he plunges into the hedonism and creativity of a post-Franco, post-fascist era of queer cultural renaissance and sexual dissidence: La Movida. This shocking intertwining — a backstory of Christian fascism and war crimes coming out of the closet long after a man’s sexual liberation — positions this documentary as a profoundly relevant teaching moment in a time of political polarization and violence. This film will contribute to a necessary broadening of the historical consciousness of LGBTQ+ Pride worldwide.

In this film, Raheb’s sixth documentary, revolutionary surrealist visualizations function as an act of collective psychotherapy — a multimodal carnival of spectacles, sexual adventures, and disturbing introspections. As a director, Raheb is Miguel’s loving but relentless therapist. Although Raheb herself does not identify as lesbian, her self-understanding and filmic voice are explicitly queer and feminist in the fullest sense. The resulting triumph triggers catharsis and a truth that shakes the foundations not just of Miguel’s Arab and gay identities, but of the global edifice of Pride itself.

This film arrives at the right moment, reorienting our sexuality politics and historical memory to face pressing political challenges. Today, in Spain, Eastern Europe, the US, and every region of the world, fascism operates explicitly in the public sphere and is often in league with right-wing armed militias and religious nationalists. On May 4, 2021, Madrid’s regional election produced a victory for a coalition of the right-wing People’s Party with Vox, an openly fascist and Franco-honoring faction. The alliance generated a polarized political landscape reminiscent of Spain’s Civil War era. In the Middle East, since 2018, huge democratic uprisings in Lebanon, Iraq, and elsewhere have challenged the sectarian and corrupt rule of militias and oligarchs and the toxic masculinities they live by. And the summer of 2021 launched a global debate about the ethnic cleansing of Palestinians and the social violence and police brutality of Israel’s militarized occupation. But these popular democratic uprisings and new waves of protest have been met with stern backlash and felt the repressive sting of militia thugs.

In this fraught context, Miguel’s War unleashes profound desires and repressed conflicts. The 128-minute excavation emerges as a reckoning in the aftermath of the new, difficult conversations about privilege, public sexuality, and faith that challenged and enlivened the recent LGBTQ+ Pride celebrations in June 2021, worldwide, as these celebrations confronted debates within communities, as well as cresting waves of new fascism and sectarianism populism from without. For Miguel/Michel, the revival of this repression generates reckoning for unaddressed homophobic and misogynistic legacies specific to the Lebanese and Spanish civil wars. Raheb’s efforts serve to help launch what might be a new consciousness for today’s Global Pride, transcending Orientalism and opening up its inner battles.

First, Miguel’s most difficult family moments and militia experiences of identity crisis are staged through a set of exceptionally awkward experiments. Miguel is ambivalent and miserable, to say the least. But he is also remarkably honest and open. He draws us into his past purgatories — seducing and disgusting, aroused and ashamed. Raheb strikes up a trusting bond of friendship with Miguel but is relentless in challenging and dispelling the legends and fantasies that Miguel has woven for himself. The agonies of confession are illustrated in three radically distinct methods. First, real actors bravely but cluelessly “audition” on a lonely, dark stage with Miguel himself under the only spotlight, to reenact the most haunting and deeply intimate past encounters with family members or militia comrades. Second, Fadi Al-Samra’s episodes of surrealist animation provide an orgy of war, refuge, militarized masculinities, religious iconography, hot cruising, and anonymous sex — blended in ways that the verbal confessions can only reveal through hesitant fragments. These Terry-Gilliam-meets-Salvador-Dalí sequences gift us cross-Mediterranean journeys and treasure maps, dildos, and firearms. Third, as we return to Spain, Miguel’s friend and drag performer, Rubén Cardoso, provides an even more probing interrogation: she is fierce and ironic, of course, but also merciless with Miguel. Through Rubén, we see that Spain forbids Miguel to forget and refuses the simplicity of offering him a “safe space” or Western liberalism.

Miguel’s War may seem, at first, a film about a gay Arab who journeys to the West. But instead, Orientalist images are dismantled and dispatched. Stereotypes that generate an East-versus-West dualism or that typify the Arab Middle East as a zone of endemic homophobia and exceptional religious traditionalism are fundamentally disrupted. Spain — a space of civil war, fascism, hypermasculinity, regional nationalism, and a deep tradition of Christian conservativism — is Lebanon’s mirror. 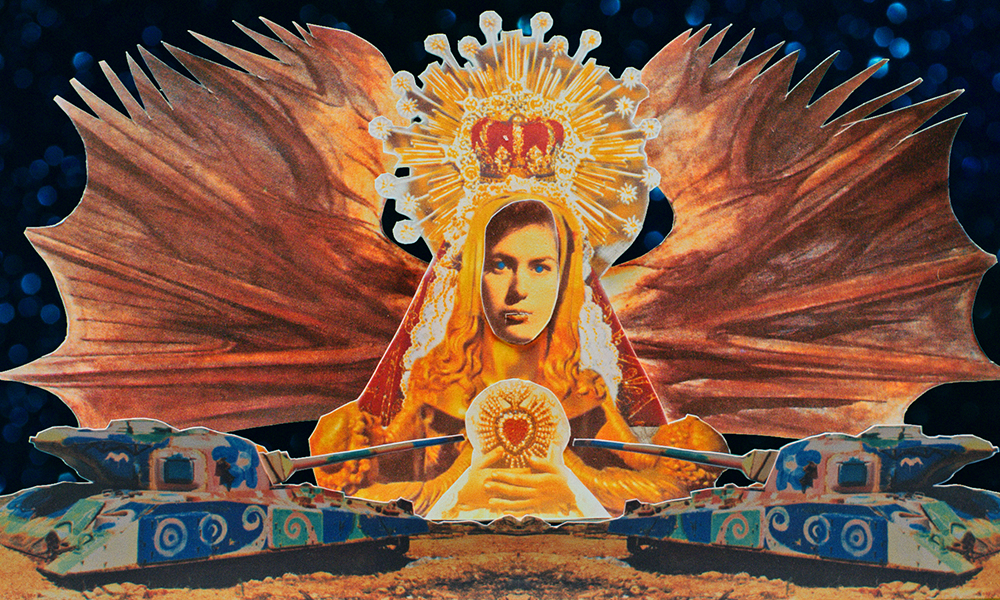