Illustrations of old radios fill one sequence of Brigitte Findakly’s graphic memoir Poppies of Iraq. Findakly writes that after the fall of the monarchy, when Iraq was declared a republic, the people of her country often tuned into an Arabic radio show broadcast from Israel, the only source of uncensored news about the Iraqi government. The program ran for over 20 years and was strictly banned: “Those who listened to it ran the risk of stiff prison sentence,” Findakly writes. “The show was a favorite and everybody tuned in.” But Findakly, at 11 years old in 1970, wasn’t everybody; an illustration depicts her sweetly smiling in bed with a radio on the pillow beside her, listening to Voice of America for English pop songs.

The rich effect of Poppies of Iraq, written and co-illustrated by Findakly and her husband Lewis Trondheim, comes from the manner in which the sweet and domestic rests alongside horror. The book is packed with reminiscences that are part wholesome — playing on ancient monuments and going on class field trips — but that are scorched by political violence. ISIS soldiers destroyed those ancient monuments with dynamite and bulldozers. On some of those field trips, students were persuaded to publicly cry for dead generals, or to salute new ones. In 1964, Findakly’s nine-year-old brother and his classmates were taken by bus to see the hanging dead bodies of Baathist militiamen. 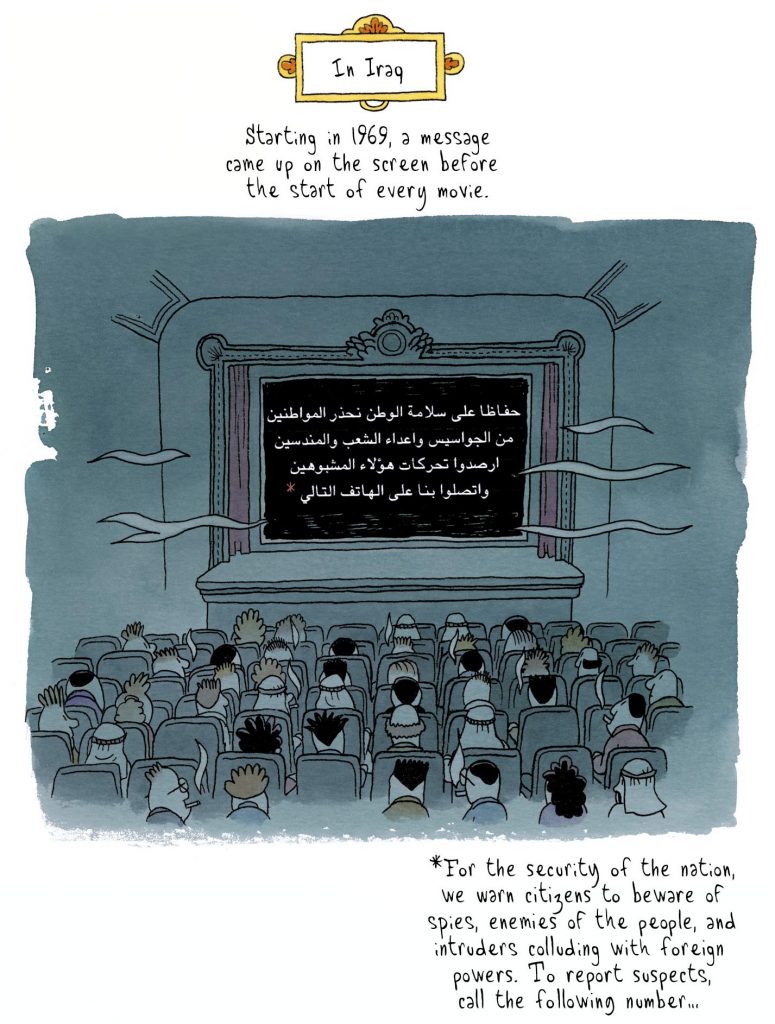 In one spooky frame of Poppies of Iraq, we see a nearly-full movie theater with Arabic across a black screen. Most in the audience are leisurely smoking cigarettes and a footnote at the bottom of the page provides the translation: “For the security of the nation, we warn citizens to beware of spies, enemies of the peoples, and intruders colluding with foreign powers. To report suspects, call the following number…”

Paranoia runs through the bloodstream of the social engagements throughout this memoir. Families like Findakly’s worry about their children being kidnapped. It’s dangerous to disparage the government, dangerous even to not commend it. People hang pictures of military leaders and don’t complain.

Consequences in Findakly’s childhood are severe and social codes conservative, even in the era before Saddam Hussein. When Findakly is nine, she befriends Anissa, a 14-year-old from the country who comes to work as her family’s maid. Findakly and Anissa love each other, and Findakly even helps Anissa with the chores so they can play together longer. When Anissa is 17, Findakly’s mother notices her flirting with a boy across the street. She alerts Anissa’s brother, who comes without hesitation and picks her up to take her back to the village forever.

Findakly’s mother was French and her father Iraqi, and they met on a train platform in Paris, when her dad was there to study dentistry. While Findakly was born in Iraq, she also has the security of being able to leave. That privilege is part of her alienation, too. She’s part-French in the Middle East. She’s a Christian in a Muslim country. She’s middle class in a poor region.

Findakly and her family leave Iraq by 1973. Her father tells them that they will return once things improve. “But that was underestimating all the adversity ahead,” Findakly writes, “with Saddam Hussein becoming president in 1979, the Iran-Iraq war from 1980 to ’89, The Gulf War in 1990, the economic sanctions that followed, the second Gulf War in 2003, and now Daesh.”

When Findakly returned to Iraq in 1989 at the age of 30, the shock was greater than usual. “Cracks went unfixed and loose tiles weren’t replaced because of shortage of building materials,” she writes. “My female cousins had stopped working. They were married and had children. We used to have drinks together before dinner, but now they were busy serving their husbands.” With finesse, Findakly weaves together the anxiety of aging with the experience of conservative living. Even as she escapes parts of the latter, there is still time and mortality to contend with.

As an Iraqi person in the world, danger and trauma are always proximate. Findakly’s cousin, a military doctor, is blown up and later dumped into a truck full of dead corpses. At the hospital later, they discover someone in that pile still breathing. On her 1989 trip back to Mosul, Findakly sees this cousin. He is bald, stooped, and has a reconstructed jaw, and Findakly can’t bring herself to look him in the face at dinner. Another cousin enlists in the Army during the Iran-Iraq war. Findakly says it was the same situation every day: he shot down young Iranian soldiers with a heavy machine gun. Findakly writes, “The Iranian soldiers all wore a necklace with a golden plastic key that their recruiters said would let them go directly to heaven.” 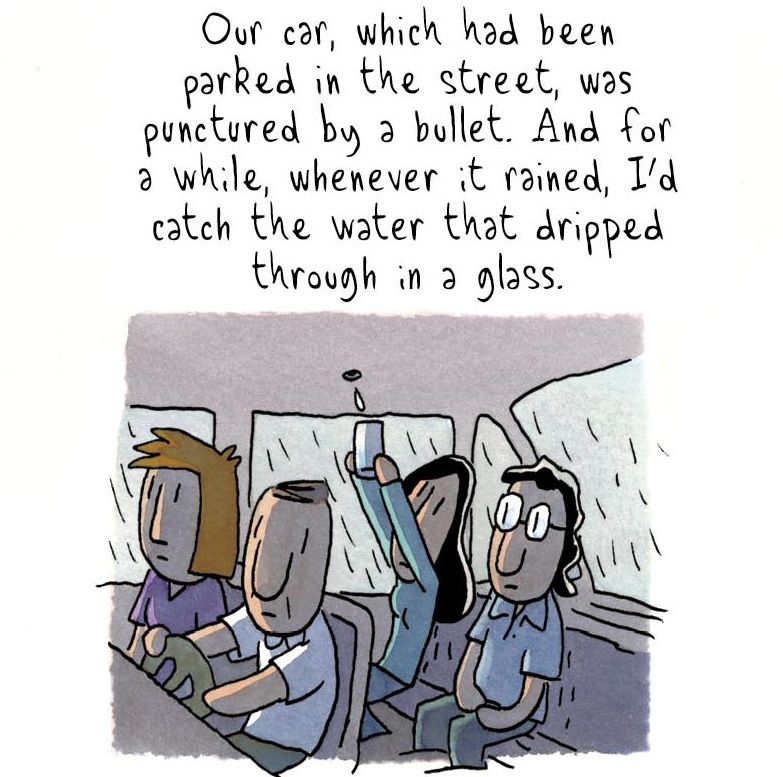 Even after they move to Paris, the danger isn’t far from Findakly’s family. In 1978, a Palestinian man shot his way into the Iraqi Embassy, and held hostages, including Findakly’s father. The man eventually surrendered to the police, but not before killing one officer in a gunfight out on the street. But in terms of our experience of this event — and this is the unique touch of Poppies of Iraq — we experience the event primarily through the domestic household. “Our car, which had been parked in the street, was punctured by a bullet,” Findakly writes. We don’t see people nervously cowering in the embassy. We don’t even see Findakly’s father during the hostage crisis. But we do see the entire family in the car afterward, stoically staring out the windshield. Findakly writes, “for a while, whenever it rained, I’d catch the water that dripped in through the glass.” 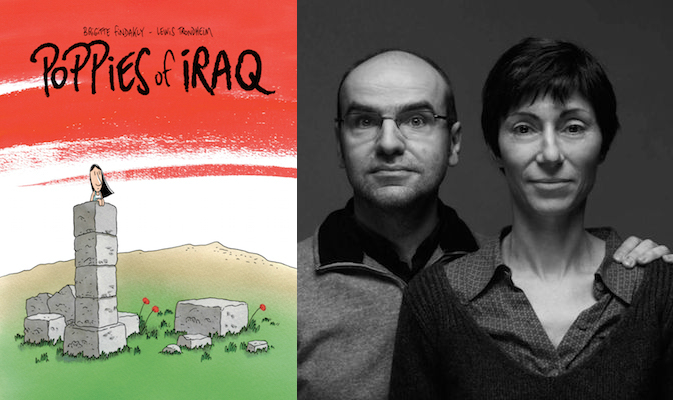