One of the more unpalatable stories to hit headlines in the UK recently was Lord Digby Jones’s bizarre classist rant at the BBC presenter Alex Scott for “her very noticeable inability to pronounce her ‘g’s at the end of a word” during the coverage of the 2021 Olympics. Outraged, the crossbench peer exclaimed, “Can’t someone give these people elocution lessons?” Alex Scott responded: “I’m from a working-class family in east London, Poplar, Tower Hamlets and I am PROUD. Proud of the young girl who overcame obstacles, and proud of my accent! It’s me, it’s my journey, my grit.” Scott’s reply asserts the importance of dialect, accent, and, crucially, the texture (“my grit”) of a person’s language to their individual presence in the world. Lord Digby’s disgust at a dropped “g” harbors the linguistic laws of exclusion (“these people”) as well as an anxiety and fear of our present, that which Q, a.k.a. Kyoo Lee, in their Introduction to Queenzenglish.mp3 (Roof Books, 2021) describes as “the world of dynamic ‘Englishing’ and its polyphonic futurity.”

What, then, does it mean to “misuse” language? The idea of the misuse of English language has historically been understood as any deviation from standard English, known with all its absurd feudal and colonial implications as “the Queen’s English” (or “Received Pronunciation”), a language owned by a monarch. A hallmark of contemporary avant-garde writing is the resistance to such possession and a commitment to a politics of voice that exposes the forms of oppression that the imposition of such a linguistic norm perpetuates. Dohra Ahmad, in the opening piece of Queenzenglish.mp3, revaluates “misuse,” shifting its meaning from deviation from staid conservative propriety to detracting from humanitarianism: “There’s no such thing as misuse — except when it belittles a human being.” Such unethical linguistic derision, a true misuse of language, is bound to the very notion of the Queen’s English.

Kyoo Lee’s timely curation of the work of over 50 writers’ experimental and polyphonic works manifests “the expressive diversity of English in transition” (9). The 21st century has seen a pushback against repressive nationalist linguistic norms and dominant monolingualisms. The works collected in Queenzenglish.mp3 are part of this resistance. Queenzenglish.mp3, Lee states, “critically questions the dominance of Anglo-American centered sociopolitical and cultural norms.” It is “a reflexive critique of the self-colonizing idea that knowledge and success are premised on the mastery of the English language, a bio-politicized notion that confines learning environments, where anglocentrism often remains powerfully literal” (10). The works gathered exhibit the way in which the standardization of language is ingrained, programmed, and codified into our cultures and everyday lives. Lee remarks “the systems that instill this ideology tend to set conformity as a prerequisite for inclusion.”

Apparatuses of linguistic assimilation are many, and often invisible, or embedded in our digital habits. Ahmad confronts the “autocorrect” functions of word processing programs, recalling hitting a glitch when citing M. NourbeSe Philip’s groundbreaking essay “The Absence of Writing, or How I Almost became a Spy,” in which Philip lists “Queenglish” in her “understanding of language… the anguish that is english in colonial societies.” Ahmad is given options to “Change back to ‘english.’ Stop automatically correcting ‘english.’ Control AutoCorrect Options” (13). Empowered, Ahmad declares “change back to english — yes! Stop automatically correcting english — yes, please! Control autocorrect options — yes, can we do this?” (14). This desire to stop the autocorrection of English and the erasure of intersectional polyvocality is the driving force of the collection. Writing through official legislative documents such as the Bilingual Education Act of 1968 (which recognized the multilingualism of students) and the No Child Left Behind act in 2001 (which dropped the word “bilingual” and added “English-only instruction”), as well as Senator S. I. Hayakawa’s 1982 speech that proposed “an amendment to immigration legislation in support of English as the official language of the United States,”  erica kaufman’s poem “Education Acts” uses “text manipulations and Oulipian experiments” (75) to defamiliarize the documents which impede language diversity, particularly in education:

kaufman’s poem reveals the violence of the legislation and the “dictation language” imposed. The idea of “policy personified” gestures to the brutal dehumanizing of children in the education system through the imposition of monolingualism, whereas becoming polyglot is associated with softness and “meaningful conversation.”

“Who actually speaks the Queen’s English?” is a question posed by the writers collected, exposing the paradox that the language considered the most widely spoken is spoken by very few people, but enforced by many. Dina Al-Kassim recalls being detained and experiencing “a state act of racially-based and unlawful intimidation” (15). In the detainment process English is “the lingua franca of law and order.” Yet Al-Kassim reveals that the people enforcing immigration procedures are “phonies and fakes” who do not speak the Queen’s English. Al Kassim asks: “Whose law and whose order turns protest’s insurgency into a mimed habit of the state? Whose aesthetic of violence is this that steals, again, the indigenous woman’s voice to strike fear in immigrant others?”

A reprove to the Queen’s English, Queenzenglish.mp3 offers a site for the emergence of the queens’ English (the tongues of many queens) and the tongues of Queens, NYC, through “creatively engaging the site from which one speaks” (10). The most linguistically diverse neighborhood in the world, Queens, NYC, is home to over 138 languages. “I arrived in Queens” the voice of Chia-Lun Chang’s poem recollects: “There are no castles, barely mansions. / This location doesn’t belong to one kingdom.” (43) Steven Alvarez’s polylingual and polyphonic piece “Queens: Quiero Que Me Quieras” is written in one of the spoken languages of Queens:

“Language itself IS diversity,” Bruce Andrews observes in the notes to “NOOSEPAPERS” (27), one of Andrews’ “Appalachian” pieces, “designed to embody some of the diversity of spoken/written language in New York City.” (27) It opens:

The works curated by Lee in Queenzenglish.mp3 share “the continued undoing or denaturation of English as ‘master-tongue’” (163), as Caroline Bergvall observes. Importantly, Bergvall recognizes the linguistic cartography of the book to be a “deeply actual language realm” (164). An ethical act of polyphonic amplification, the book has a political significance. For Rommi Smith plurivocality offers resistance and empathy, it “is an act of subversion; and expression of anti-divisionism” (141). Smith highlights the relation between utilizing plurivocality and the work of Black women creatives, as well as the act of “queering borders.” Bergvall terms polyvocal language “Zenglish,” “a compound cultural language that in itself can testify to the emergence of a glaringly undervalued yet interconnected, intersectional commons.” Queenzenglish.mp3 welcomes us into Zenglish, and the polyvocal borderless space of our present. 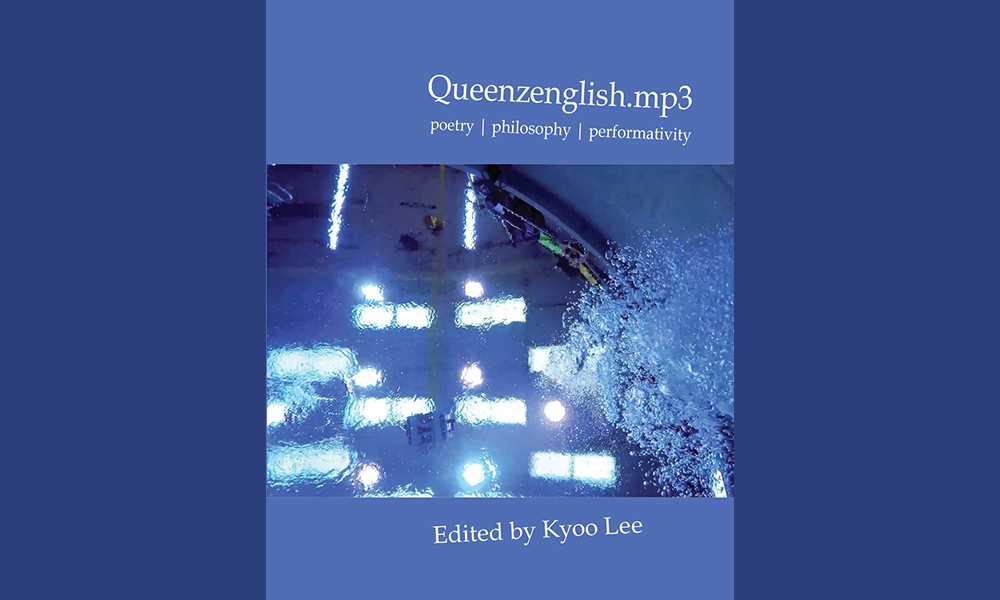